The British & Irish Lions has today announced the formation of a Women’s Lions Feasibility Steering Group.

The 13-person group will be chaired by former British & Irish Lion, Ieuan Evans, and is made up of experienced administrators from across professional rugby, business executives, as well as former international standard athletes from the world of sport.

The group is tasked with looking into the feasibility of establishing a Women’s Lions team:

The primary responsibility of the newly-formed group will be to initiate, oversee and contribute towards a feasibility study which will seek to ascertain whether a Women’s Lions team could be formed.

The study is being funded by Lions Global Partner, Royal London, who are also the inaugural ‘Principal Partner’ of the Women’s Lions programme.

As a champion of Women’s sport, Royal London, the UK’s largest insurance mutual, will provide guidance and expertise to the working group. The study will be undertaken by a specialist consulting firm which will be appointed by the Steering Group. 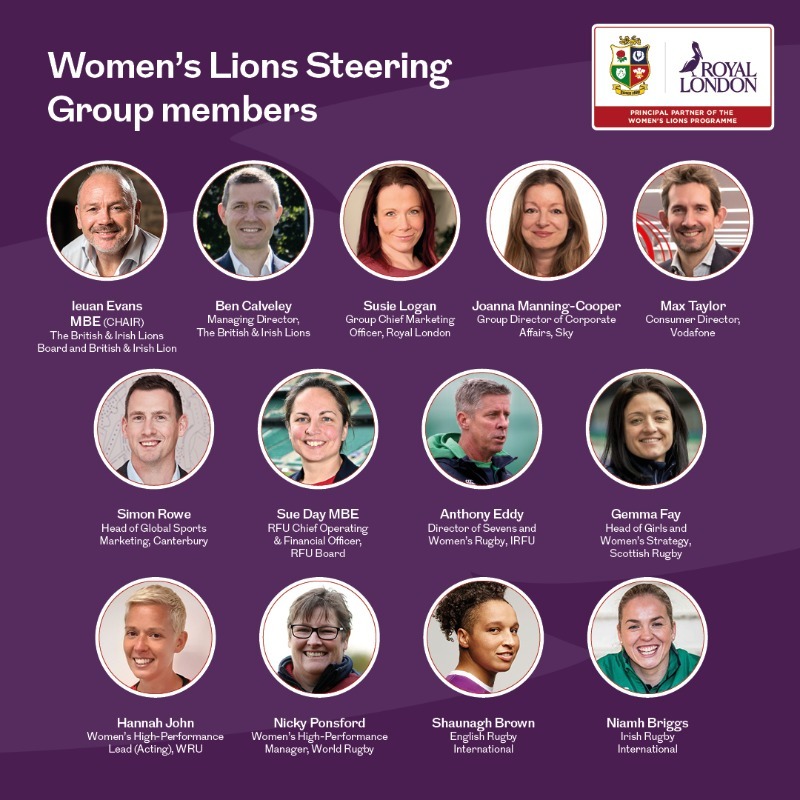 “We are excited to have put together such a stellar list of individuals who I know will add value to this project,” said Ben Calveley, British & Irish Lions Managing Director.

“I believe a Women’s Lions team is a huge opportunity, but there are a number of challenges to consider when looking to create a successful Women’s set-up. Financial viability, suitable opposition and appropriate scheduling in the Women’s rugby calendar will all need rigorous analysis, research and careful consideration.

“We are very grateful to be working with a purpose-driven organisation like Royal London on this initiative. Our broader commercial family – including Sky, Vodafone and Canterbury – have also committed to provide their expertise and play an active role in the feasibility analysis.

“A Women’s Lions team is a big opportunity for the Women’s game, and I am looking forward to working with the Steering Group to assess its viability.”

Commenting on the announcement, Susie Logan, Group Chief Marketing Officer at Royal London, said: “We are committed to levelling the playing field in sport and we’re delighted to be supporting this important study to understand if the creation of a British & Irish Lions team for women will be possible.

“We want to support a society that is inclusive and benefits everyone, and this partnership with the Lions is a great opportunity to grow Women’s rugby.”