This is the final block of matches before the Energia Women’s All-Ireland League takes a week’s break. UL Bohemians and Old Belvedere put their winning starts on the line in a top of the table clash.

Preview: Galwegians pay their first ever visit to Tanner Park, seeking an upturn in form after two opening defeats to Malone and UL Bohemians. Four tries scored and twelve conceded is a disappointing record.

Trailing 24-0 at Cooke, Ballincollig showed the fighting spirit that their head coach, former Ireland international Fiona Hayes, is renowned for and scored two late tries from their back-line.

Centre Jayne Pennefather scored the first with a strong run to the left corner, after the ball had been worked wide to her. Flanker Katelyn Fleming then showed very good strength to go over from close range.

A second home victory in three rounds is their aim, with Denis Stevenson, Ballincollig’s director of rugby, expecting a ‘tough encounter against an experienced Galwegians side’.

“We have a few players returning from injury this week after missing the trip to Belfast. Denise Redmond returns to the pack and Heather Kennedy comes back in on the wing,” he explained.

“Roisin Ormond starts her first game this season which is very welcome. She brings a great bit of experience to our young side.

“We’ve been delighted with the start of the season and it is all small steps in the development of this team. We’ve been very competitive in both matches and, with one win, it has helped us to promote women’s rugby in cork this season.

“We’ve been excited watching the development of all the players, and having a second team has helped us give new players a run-out before coming into the AIL squad. Hopefully we’ll take another step on the development ladder tomorrow.”

Tracy Lawlor will make her second start of the campaign at hooker, and Sarah Walsh also gets the nod in the tight five, combining with Dunne in the second row.

“The coaches have kept it very positive at training, with Niamh Ni Dhroma and Colin Younger introducing high intensity drills and the players are in good spirits. It’s going to be small steps for us,” he said.

“We’re looking for improvement and progress from last weekend. We know it’s another big ask for our young team.”

Wicklow are without two of their experienced players – co-captain Amy O’Neill and Tammy Breen are away training with the Ireland rugby league squad – and young star Vicky Elmes Kinlan has Ireland Sevens commitments.

Ella Roberts misses out through injury, handing Eva Phelan her AIL debut after coming up from the Under-18s this year.

Robyn Mullen, who played with Ireland international Emma Hooban at Portlaoise, starts at hooker for her first Wicklow appearance, while Caitlin Griffey is restored to the second row.

Meanwhile, Blackrock College, who were 50-point winners at Suttonians last week, give a long-awaited debut to Ireland prop Laura Feely who returns from playing in the Rugby World Cup qualifiers.

The Ballybofey native is one of seven changes made by head coach Ben Martin. Leinster captain Christy Haney features at tighthead for her first start of the league run.

Aoife Moore, the former St. Mary’s skipper, shifts to the back row where she joins the newly-introduced Aoife Browne and place-kicking number 8 Hannah O’Connor, who has accumulated 26 points in two games.

Natasja Behan, who switches to full-back, has Eimear Corri and Orla Molloy for company in the back-three. Niamh Griffin slots in at scrum half, and captain Michelle Claffey lines up outside Ciara Scanlan in the centre.

There are two sets of sisters in the ‘Rock matchday squad – Orla and Caoimhe Molloy, as well as Meadhbh and Caoimhe O’Callaghan who are both held in reserve for this Leinster derby. 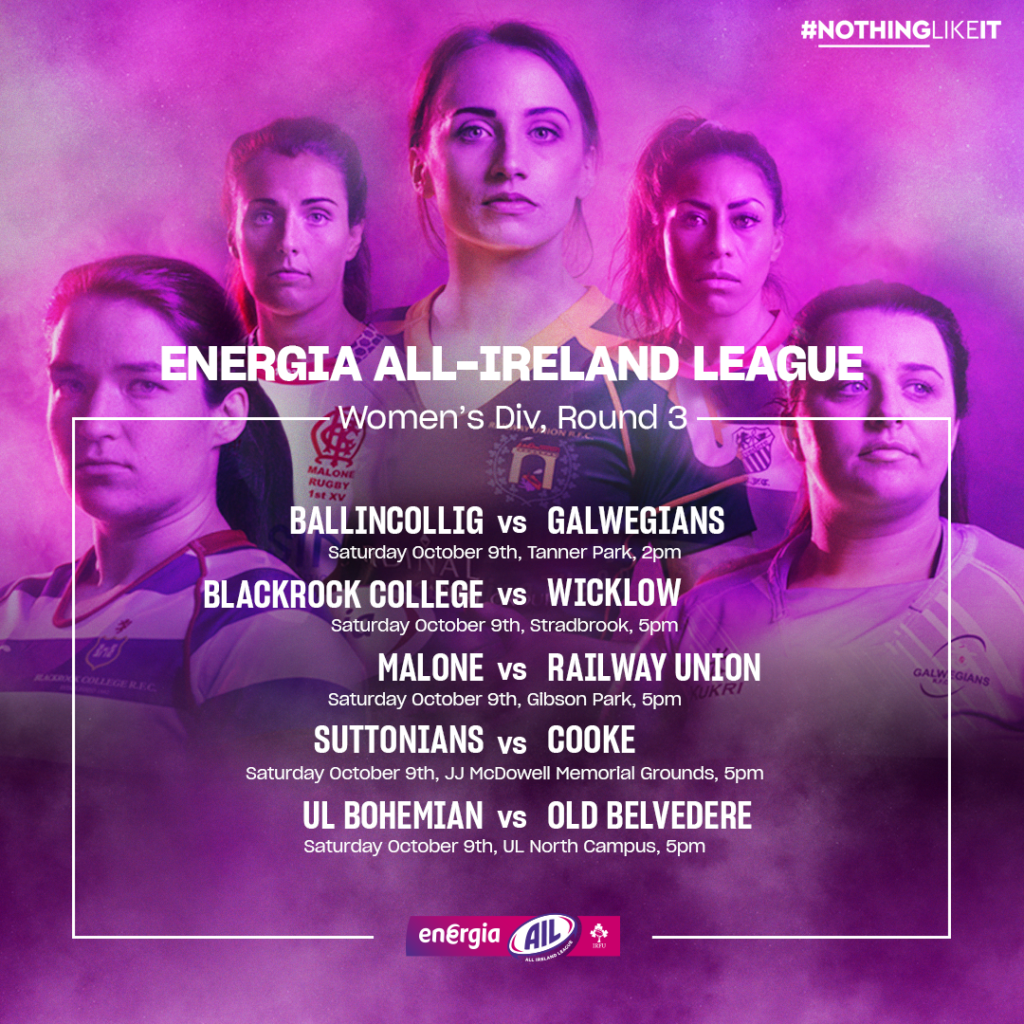 Match Cancelled – Please note that due to a confirmed case of Covid-19 in the Malone Women’s squad, and the subsequent directions from the Public Health Authority, the match between Malone and Railway Union has been called off.

As per the IRFU Rugby Committee decision on Covid-19 affected games, the match will not be replayed and each team is awarded two league points with a 0-0 score being applied.

Preview: Emily McKeown, Lena Kibler and Jessica Kelleher are all promoted from the bench to start in the Suttonians’ back-line, as they look to banish memories of last week’s heavy loss to Blackrock.

McKeown and Kibler, founder of the TU Dublin Women’s team, combine with full-back Sophie Gibney in a refreshed back-three. Kelleher, who was part of the extended Munster squad this season, dons the number 10 jersey.

Sutts head coach Stephen Costelloe has opted to bring in Ciara O’Brien at lock and there is a start for Roisin O’Driscoll at blindside flanker. Louise Catinot, the former Trinity captain, moves to the openside role.

Strong-carrying Leinster prop Mary Healy, who earned a call-up to the Ireland squad recently, gives the Sutton club an additional boost with her presence on the bench. The Dunlavin native is poised to make her AIL debut.

After opening their win account against Ballincollig, Cooke have unsurprisingly kept the changes to a minimum for this third round tie in Dublin 13.

Head coach Daniel Allen has brought Megan Simpson back in at hooker, meaning a positional switch for Ulster captain Beth Cregan who links up with Katie Hetherington and Helen McGhee in a reshuffled back row.

There could be a first AIL appearance off the bench for exciting Enniskillen youngster Lucy Thompson, who played for Ulster in the recent Under-18 Interprovincial Championship.

Second row Naomi McCord has really shone for the Cookies following her move from Malone. Her second try in as many league games was a brilliant 45-metre effort that secured the bonus point in the Ballincollig encounter.

Eager to build on that performance, she said: “I’m really looking forward to the trip down to Suttonians. We’ve been really proud of our last two performances and I can’t wait to bring the same positive attitude to this game.

“We’ve all been putting the work in each week at training, so it’ll be great to see that hard work pay off for our 1sts and 2nds this weekend and onwards.”

Preview: Ireland captain Ciara Griffin is set to play for the first time since suffering Rugby World Cup qualifier heartbreak with the national team in Parma two weeks ago.

Griffin has been named on the bench for UL Bohemians as they prepare to host Old Belvedere tomorrow evening in the first top-four clash of the Energia Women’s All-Ireland League season.

Belvedere have been motoring along nicely, with retired Ireland out-half Hannah Tyrrell leading the division’s scorers currently with 31 points, including three tries.

However, Tyrrell is unavailable this weekend so Bohs number 10 Nicole Cronin, a star of Munster’s Interprovincial title-winning campaign, will miss out on her duel with the Dubliner at the UL Arena.

Old Belvedere head coach Johnny Garth commented: “This is a very tough game against one of the competition’s standout teams. We’re a little short for this game with a number of players unavailable, mostly through injury.

“It’s a great opportunity for us to test our squad depth and for players to put their hands up.”

Stephanie Nunan moves to the right wing to accommodate Alana McInerney’s switch to the centre where she partners the experienced Rachel Allen. Both Nunan and McInerney have scored three tries so far.

There is also a young all-Tipperary second row pairing for the Red Robins, who bring Clonmel’s Sarah Garrett (22) into the engine room alongside 21-year-old talent Claire Bennett, who hails from Cashel.