A titanic all-Tipperary tussle gets the action underway this weekend in Division 2A of the Energia Men’s All-Ireland League. Meanwhile, table toppers Queen’s University are Limerick bound.

Match Cancelled – Unfortunately due to Covid-19 concerns, the decision was taken to call off the match between Cashel and Nenagh Ormond which was due to be played tonight.

This decision was made following the process put in place involving consulting with the Medical department of the IRFU.

As per the IRFU Rugby Committee decision on Covid-19 affected games and communicated to all clubs, the match will not be replayed and each team is awarded two league points with a 0-0 score being applied.

Ballymena’s first home game of the season sees mid-table Buccaneers make the trip north. They have ground to make up after losing a high-scoring opener 40-24 to Queen’s University.

At least their forward play is picking up points – hooker James McCormick touched three times against the students – and Paddy Browne, the Ulster Development XV lock, is enjoying playing alongside his brother Jonny.

Danny Qualter set the tone for Buccs against Cashel, in terms of sheer work-rate and physicality. His young team-mates followed, including debutant centre Stephen Mannion, a son of former Ireland number 8 Noel. 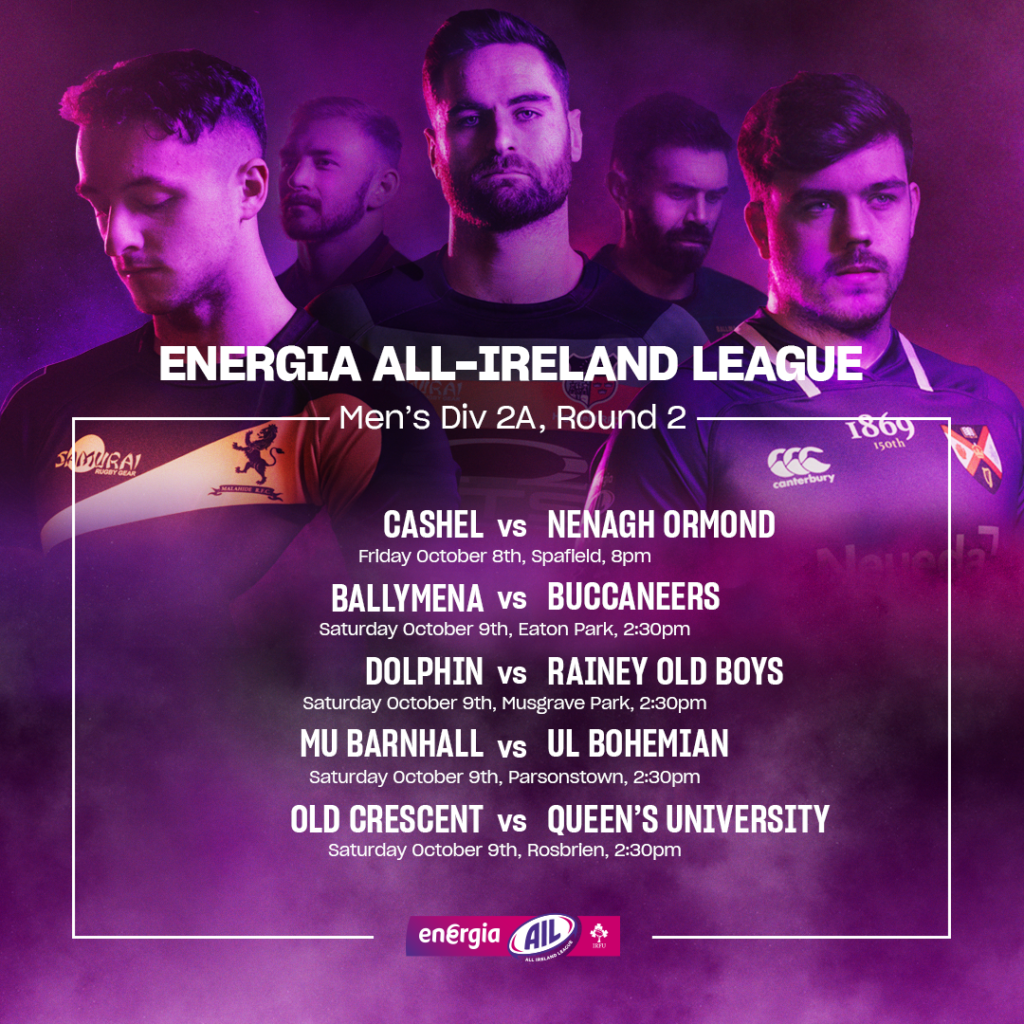 Putting together consistent results is the early-season goal for Dolphin who, despite some rejigging of their back-line due to late withdrawals, handed UL Bohemians a 20-6 defeat.

Dolphin’s new head coach Brian Scott, who included four AIL debutants, acknowledged: “It was a strong team performance, particularly in defence, and it gives us a good marker for the rest of the season. Plenty to work on also.”

Awaiting them is a bruising clash with Rainey, the comeback kings after wiping out a 17-point deficit against Old Crescent. Prop Deaglan McErlean, their September Player of the Month, has hit form in the scrums and the loose.

MU Barnhall are back in familiar territory, having launched their promotion push with a 32-24 bonus point victory in Nenagh. They are led again by number 8 Tom McKeown, who is on an incredible run of 151 consecutive AIL starts.

The Blue Bulls, who are live-streaming this game on Facebook, will be expecting a backlash from Tommy O’Donnell’s UL Bohemians side who were frustrated by Dolphin and ultimately held try-less.

Ulster opposition again for Old Crescent who led a 17-point lead slip in Magherafelt. Backs Cathal Monaghan and Jack O’Mahony opened their try accounts for the season, but Crescent could not maintain their strong start.

Queen’s University arrive in a rich vein of form, as evidenced by their 40-24 triumph over Ballymena. The best of their six tries was a fantastic 90-metre four-man move, started and finished by flying winger Stuart Martin.

Queen’s head coach Derek Suffern commented: “Our goal is certainly automatic promotion. We didn’t get to finish off what was a very successful season last year. The boys are so coachable, so committed, and really hungry for success.”