David Ryan, younger brother of Leinster and Ireland lock James, is pictured in action for UCD against Dublin University during the 2019 Colours match ©INPHO/Tommy Dickson

The Dudley Cup is the prize on offer in Belfield tonight as UCD and Dublin University kick off the second round action in Division 1A of the Energia Men’s All-Ireland League.

Preview: Leinster’s Liam Turner is back from recent Ireland Sevens duty as Dublin University look to recover from a disappointing first day out. Turner comes in at outside centre, with Luis Faria moving to full-back.

Cian Crotty, former Naas back Marcus Kiely and Ronan Murphy are the other Trinity changes. Hosts UCD are hoping for a repeat of their 30-19 win when they last hosted Tony Smeeth’s side two years ago.

There are a number of individual battles to look forward to, especially the match-up of hookers Bobby Sheehan and Mark ‘Sparky’ Nicholson who have both started the season impressively.

Preview: Only a point separated these teams when Ballynahinch last entertained Clontarf in January 2020. An Aaron Cairns try was the difference, ‘Hinch being good value for an 11-10 triumph.

However, judging by last week’s four-try dismissal of UCD, ‘Tarf have taken their attack up a few notches since then. Leinster’s David Hawkshaw enjoyed his chance to shine, scoring 14 points.

‘Hinch will have been working hard on their maul defence and tackling out wide, as Young Munster hurt them in both areas. With those improvements, they could make it a tough afternoon for Andy Wood’s men. 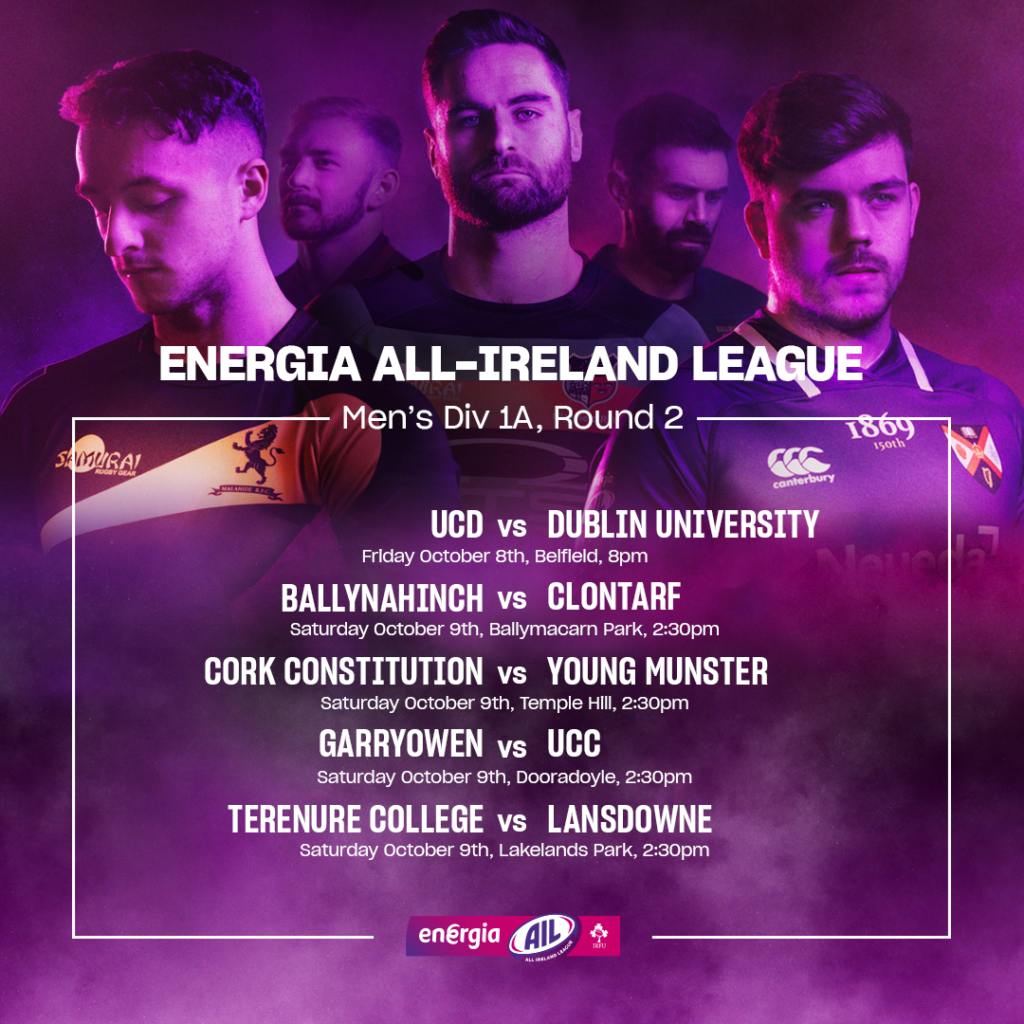 Preview: Following their late loss at Lansdowne, this is a fascinating test for Cork Constitution. The defending champions need a performance at home, or it could be a shaky first fortnight for them.

They have stalwart back rower Luke Cahill back involved after a spell in Australia. Con did the double over Young Munster in the league in 2019/20, while the Cookies can boast two Munster Senior Cup wins.

Winning at Temple Hill would be huge for Gearoid Prendergast’s young squad. David Begley, Pa Ryan and Dan Walsh are all promoted from the bench to start this mouthwatering Munster derby.

Preview: Garryowen will have some enforced changes as Munster have called up Liam Coombes, Neil Cronin and Jack Daly for URC duty. Coombes starred with a try double at Trinity, from the right wing.

UCC could benefit from John Hodnett’s presence, the 22-year-old Munster back rower is hoping to put a run of games together after his long-term Achilles tendon injury.

Tony Butler and Cian Whooley, two of the province’s emerging out-half talents, are set to face off at Dooradoyle. Ennis youngster Butler kicked a crisp 15 points for Garryowen last week, while Whooley is back looking sharp after missing Ireland Under-20 selection due to injury.

Preview: Terenure College impressed on the road against UCC, recovering from a slow start to run in five tries. Much-changed Lansdowne are tomorrow’s visitors, with scrum half Alan Bennie set to face his former club.

Leinster Under-20 Development prop Ben Popplewell, son of Nick, will make his full AIL debut at loosehead for Lansdowne, with Leinster-capped backs Michael Silvester and Cormac Foley also drafted in.