It is set to be her maiden outing against Scotland – and the side’s first encounter with them in over 19 months – but Ireland centre Eve Higgins has some idea of what to expect at Stadio Sergio Lanfranchi in Parma on Saturday (Kick-off 5pm Irish time, live on RTÉ2 and World Rugby’s YouTube and Facebook channels).

At the same venue last Sunday, the Lucan native made her fourth appearance at outside centre in 2021 as Ireland emerged with a crucial 15-7 triumph at the expense of host nation Italy in round two of the Rugby World Cup 2021 Europe Qualifier. This was a timely-boost following their defeat to Spain six days earlier and keeps them in the reckoning for a spot at next year’s finals in New Zealand.

You have to go back to February 2, 2020 for the last time Ireland faced Scotland in a competitive game – a Women’s Six Nations encounter at Energia Park that saw the home team securing a hard-earned 18-14 success. Higgins was still awaiting an international bow at this level when the Scots arrived in the Irish capital for that opening weekend fixture, but she has come across a number of their players in rugby’s other code.

Nonetheless, she acknowledged the lack of a recent meeting between the two teams means Ireland will be relying more heavily on video footage to analyse the Scottish challenge than they may have done in the past.

“There is a huge gap, we’ll take that into the preparations. We’ll go into them tomorrow and look at what they’ve done in the last few months. Since the Six Nations and into these games. For myself anyway, I have played against a few of them,” Higgins remarked in advance of the game.

“The majority of their backline play 7s and I’ve played against them a few times in the last few months with them playing for GB. So at least I have a certain feel for their players. But yeah, we’ll be doing our reviews on them tomorrow. We’ll get some analysis on them.” 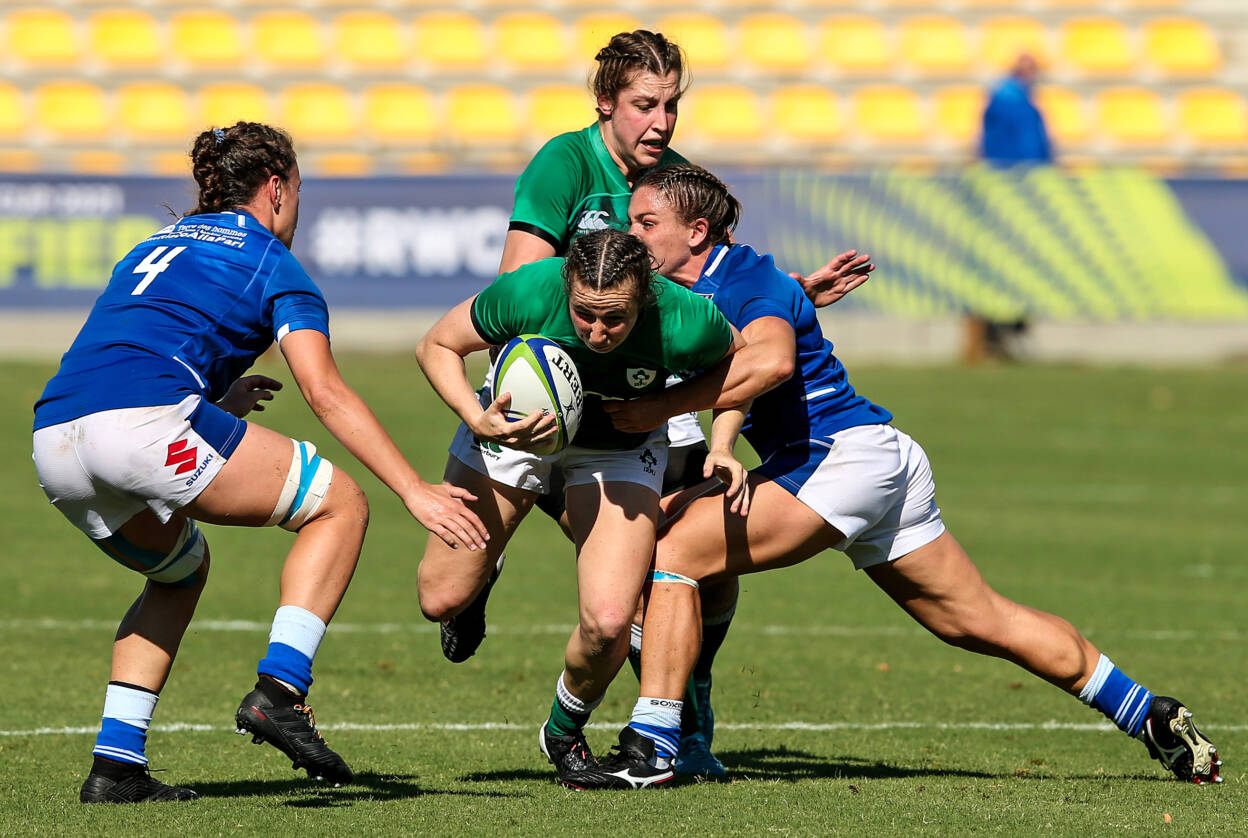 The fact that Ireland haven’t faced Scotland since the lockdown started makes it easier for the squad to look at Saturday’s game with an inward focus. Even allowing for their excellent recent records against the Scots – they have won 14 of their last 15 meetings – Higgins believes Adam Griggs’ side have to concentrate on the here and now.

“Our approach at the moment is just on ourselves, to be honest. Because we do feel we have a lot of improvements as a squad to make. The majority of our focus will be on ourselves and what we can do better as a squad. Because of the huge break there’s been with Covid, we can’t really look that far into the past. We’re very much in the present.”

Both inside and outside of the camp, it was generally agreed that the team performance delivered against Italy was a significant improvement from the Spanish game. Although Higgins sees scope for further growth within the Ireland squad, she also feels the intent has been there throughout their recent displays, even if it isn’t always reflected on the field of play.

“We’ve created a lot of chances but just haven’t executed them. We were still frustrated with ourselves in that Italy game because we left a few tries out there. We’re just not pulling the trigger and we know how devastating our backline can be, through the Six Nations and stuff like that. From set-piece and in open play.

“We just want to execute more of our chances to put scores on the board. We still want to right some wrongs even from the Italy game, like executing our chances.”

Despite the experience she gained as a 15s player with MU Barnhall and Railway Union – her underage and adult club sides respectively – switching from one international programme to the other has been a considerable step-up for Higgins.

Upon making the transition from the Sevens squad, there is one area in particular that she had to adjust to quickly.

“I think at 13, defence is a huge thing. You can do as much in training but until you’re in a game you can’t really recreate game-like scenarios. To be honest, when the Six Nations finished, it was unfortunate it was only three games. I just wanted it to keep going, just to get into the swing of things. Defensively, that was the huge difference.

“Your whole attitude towards defence is different, you’re not trying to guide them out, you’re going to them. That was the biggest thing. It took me a while to get into, but I’m trying to improve it every game,” Higgins added.