Although she is only four caps into her 15s international rugby career, Stacey Flood believes she is growing into the role of Ireland out-half.

Having featured extensively in the Ireland Sevens programme in recent years, the Dubliner made her debut in the 15s code when Adam Griggs’ side comfortably overcame Wales in the opening round of this year’s Women’s Six Nations in April.

Following her cameo role in that game, she came off the bench against France before delivering a player-of-the-match performance in her first start against Italy in a play-off win at Energia Park.

She was also handed the number 10 jersey in Parma on Monday evening as Ireland began their Rugby World Cup 2021 Europe Qualifier campaign with a disappointing 8-7 defeat to Spain.

As she prepares to face Italy for a second time in 2021 this Sunday (kick-off 2pm Irish time), Flood acknowledged the experience of her team-mates is helping the Railway Union back to learn on the job.

“I’ve played in high pressure environments. I’ve been playing since I’m 18 in the Sevens. We’ve played in the World Cup and we’ve played on the Series for so many years,” she said.

“I think once you have the backing of the squad, like I’ve been having (it makes it easier). The girls are so, so supportive. I literally can’t harp on enough about how much they back me up.

“If they see anything, they’ll come to me and say it. It’s critical learning for me. I feel like I’m learning so much, but the more the players around me are helping, it makes it so much easier.

“Obviously out-half is a really, really important position, but it’s not a one-person squad. It’s a whole 40 players who have trained with us, pushing each other.

“Obviously some things in the game earlier this week weren’t coming off, but on any other day half of those would be tries.” 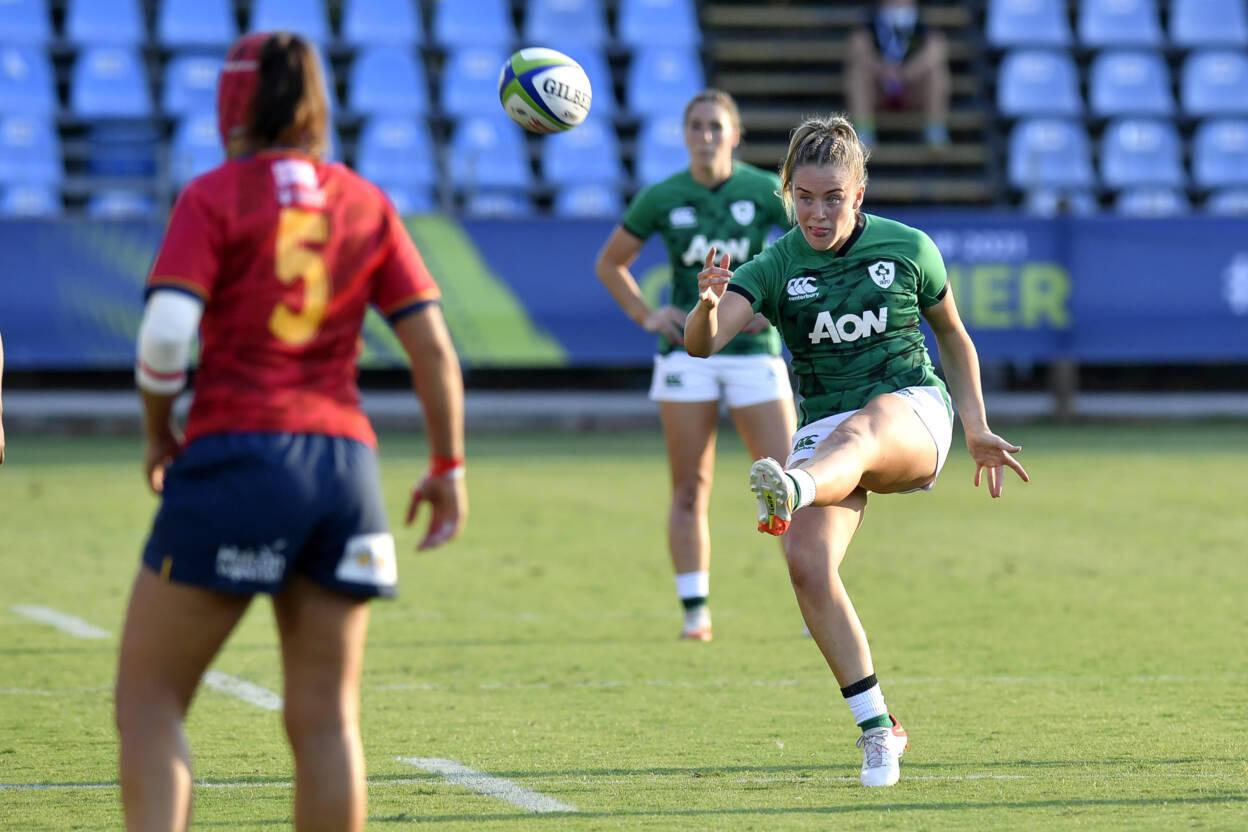 When Flood was replaced by Enya Breen in the 56th minute of the Spanish game, Ireland were 7-3 in front as a result of a Beibhinn Parsons try that was converted by Flood herself.

However, a Lea Ducher try in the closing stages ensures Griggs’ charges have been left with no margin for error in their remaining games against Italy and Scotland.

In terms of where Ireland did not perform in Monday’s contest, Flood looked at it from a general perspective rather than focusing on just one area.

“Because a lot of things in the game went wrong for us, it’s hard to put your finger on just one thing. Just as a collective, knowing when to pull that trigger and when to say, ‘look, we can actually get points on the board here and get some go-forward’,” she explained.

The most frustrating thing is, we created so many opportunities. It was just a case of, ‘we’re not executing this’.

“When the forwards were firing, the backs weren’t firing. I think it’s a case that it’s kind of everyone needs to look at a team collective.

“It’s not one thing or the other thing. We just need to work as a squad together to have that want and know that, on these big occasions, we have to pull the trigger and get the points when we can.”

During the first half against las Leonas, Flood was able to take advantage of one of the new rules that World Rugby are currently trialling on a global scale.

Under the new 50:22 law, if a player kicks the ball from inside their own half and the ball bounces before going into touch inside the opposition 22, the kicking team will get to throw into the subsequent lineout.

Flood executed a kick of this kind up the left wing to give Ireland an attacking platform close to the Spanish line.

This is something that the Ireland squad had spoken about in the lead-up to the game, and while it did not lead to the second try that her side badly craved, Flood was pleased to pull it off in the heat of battle.

“I was more focused on catching the ball. I don’t think I caught it cleanly actually, but it bounced and I got it. I could actually hear Kathryn Dane screaming, ’50! 50!’,” she added.

“We had been practicing them in training. Not from that angle, but we had been getting the ball on the boot. Seeing if we had the range.

“I was happy with that, but I probably wouldn’t have given it a go if my team-mates weren’t shouting at me, backing it.”