After erasing an early 10-point deficit, Leinster turned on the afterburners to beat Munster 34-15 and assume the mantle of PwC Under-18 Schools Interprovincial champions for 2021.

The vocal crowd at MU Barnhall RFC were treated to another humdinger of a game, this rearranged first round clash showing the best that age-grade interprovincial rugby has to offer.

However, despite a second Munster try from Sean Long, Andy Skehan’s Leinster side gradually stirred up the winning formula, bagging an unlikely bonus point in the end.

The forward trio of Michael Colreavy, Richard Whelan and Tom Stewart all touched down, with out-half Jack Murphy having a handsome place-kicking return of 14 points.

Munster, who had lost 22-15 to Ulster, were clearly fired up for a much-improved showing. Captain Stephen Kiely’s well-struck 50:22 kick provided the initial attacking platform.

PBC Cork hooker Sheehan had two bites at the line from close-range tap penalties, the second one being successful as his powerful drive was converted by Lynch.

Out-half Lynch made it 10-0 to Munster with a ninth minute penalty, rewarding more good work from his forwards and punishing an offside decision against Leinster prop Andrew Sparrow.

The Blues’ back-line excelled against Ulster last week, and a crisp move from a 15th-minute scrum saw winger Hugo McLaughlin speed into space as Munster’s defence came under pressure for the first time.

Leinster back rowers Inigo Cruise O’Brien and Whelan carried forcefully in the 22, before Sam Berman passed just before the tackle, freeing up his centre partner Kritzinger to score from 10 metres out.

Murphy converted to bring his side level, and as the tempo increased, Liam Angermann launched Munster back downfield with a penalty at the breakdown. Ruben Moloney responded by tidying up a Kiely kick through. 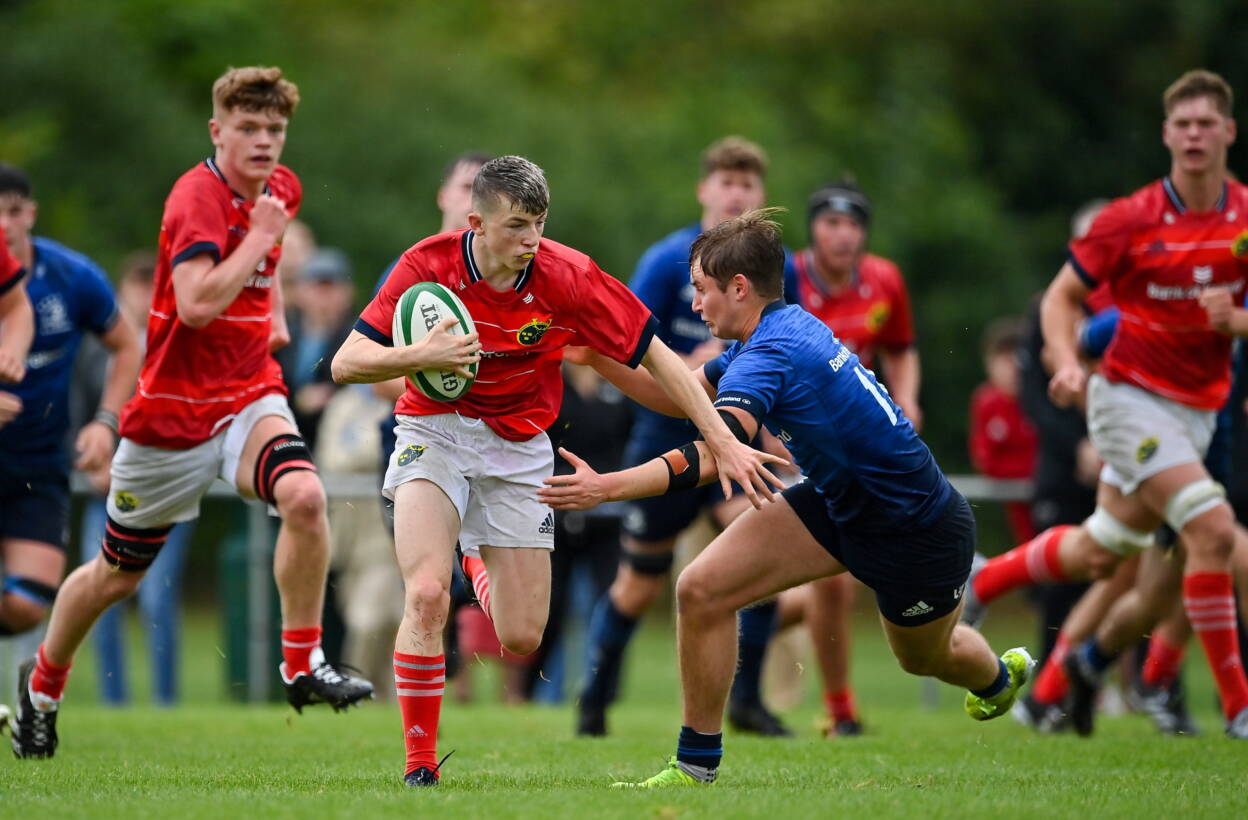 Munster had the best opportunity to score before half-time, scrum half Jake O’Riordan sniping through on a promising break which centre Harry Long took on. However, just in front of their posts, Leinster number 8 Whelan came up with a crucial turnover penalty.

Early in the second half, Leinster signalled their intent by turning down two kickable penalties. Their decision-making paid off when Blackrock College lock Colreavy burrowed over, Murphy’s conversion making it 14-10.

Lynch pushed a penalty wide soon after, but skipper Kiely’s slick chip-and-collect got Munster back on the attack. A jinking run from Oisin Pepper, following a turnover, suddenly had them back in scoring range. 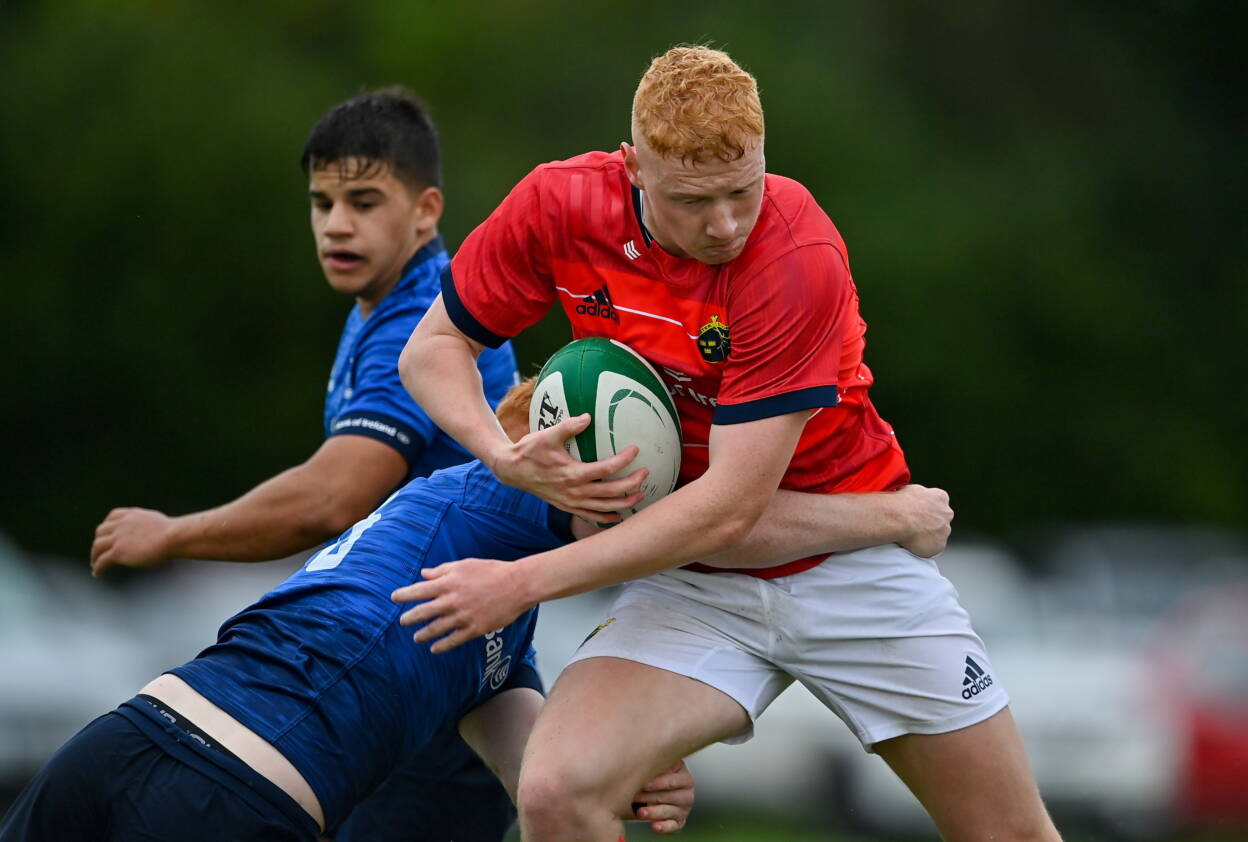 Pepper managed to link with fellow replacement Jack Ryan, as Leinster scrambled back, and lock Jack Somers’ brilliantly-executed kick sat up invitingly for Long to ground in the left corner.

The celebrations showed what it meant to Noel O’Meara’s youngsters, whose tails were now up again. Lynch could not convert from out wide, and Murphy’s reliable right boot wrestled back the lead following a Munster offside.

Leinster then went up a couple of gears, on the back of a Sparrow turnover penalty. Replacement Davy Colbert was released down the right touchline, Cruise O’Brien carried closer in and then Whelan’s well-angled drive saw him pile over past a clutch of defenders.

The back rower’s 53rd-minute effort was converted from the right by Murphy, who extended the lead out to 27-15 with a subsequent penalty, awarded for a maul infringement by Munster’s Evan O’Connell. 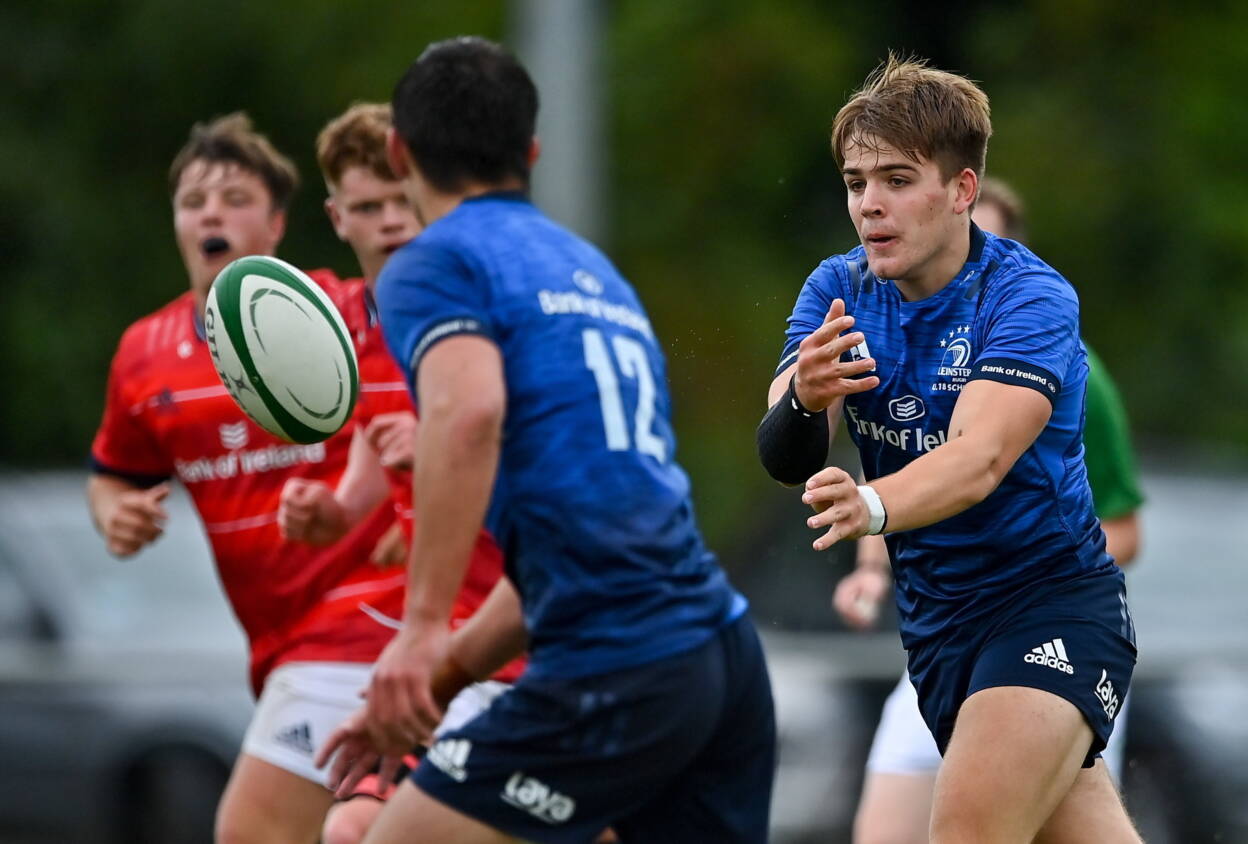 The St. Munchin’s College winger was agonisingly close to a try a couple of phases later, Cillian O’Conner’s classy delivery putting Harry Long through a gap but Pepper was unable to hold onto the centre’s pass.

With five minutes remaining, Cruise O’Brien tidied up lost Munster possession and made good yards through the middle, before Leinster forced a lineout on the edge of the opposition 22.

Sensing a clinching score, the maul made headway and then Sparrow and Colreavy chipped away. The moment arrived for loosehead Stewart to muscle in past two defenders for the bonus point score, converted by Murphy.

Following their second successive bonus point victory, Leinster captain Stephen Smith was presented with the Kevin D Kelleher (Interprovincial) Cup and the Dudley Cup, which is contested between the two provinces in honour of the late Dudley Herbert, the former Munster Honorary Secretary and schools coach. 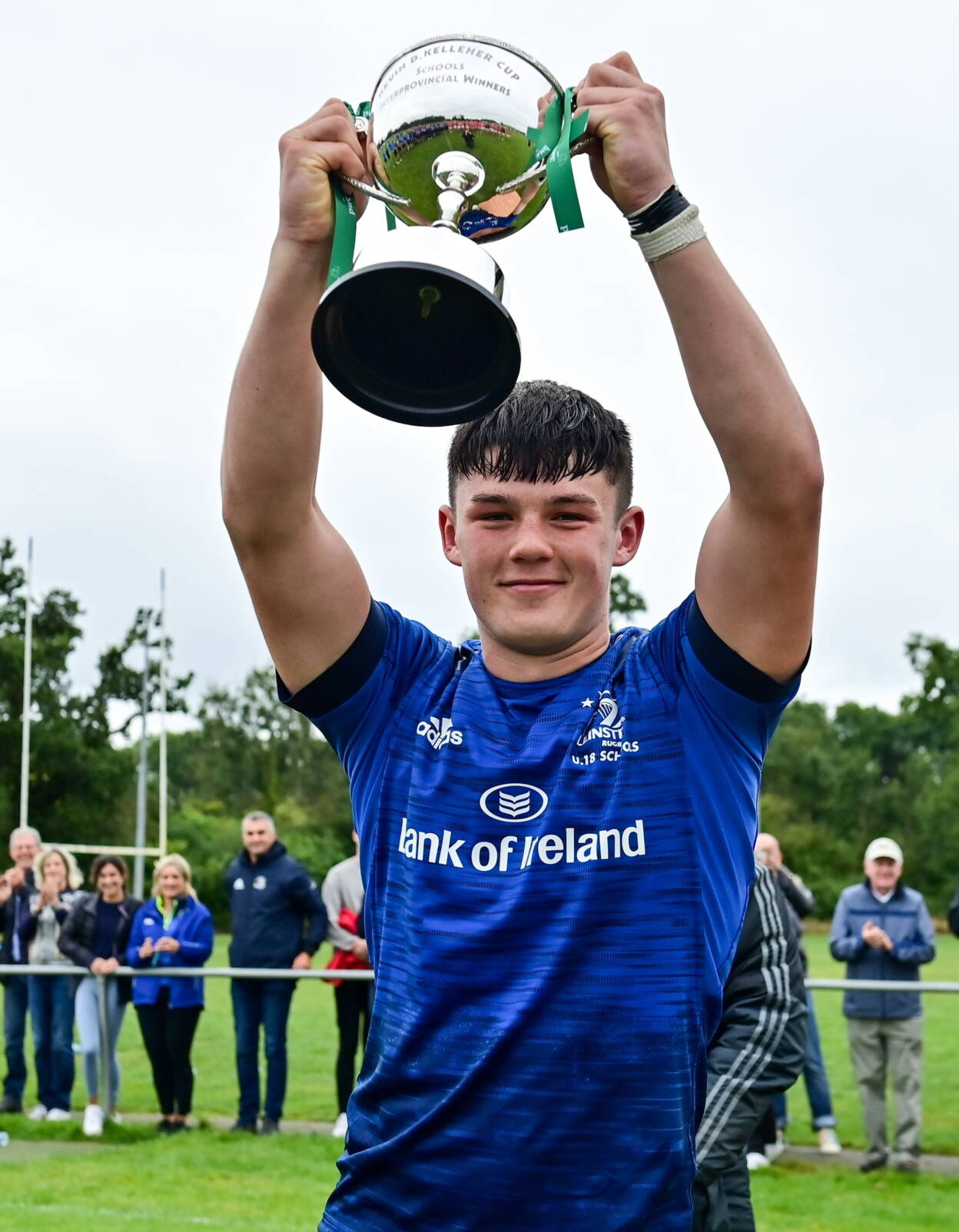 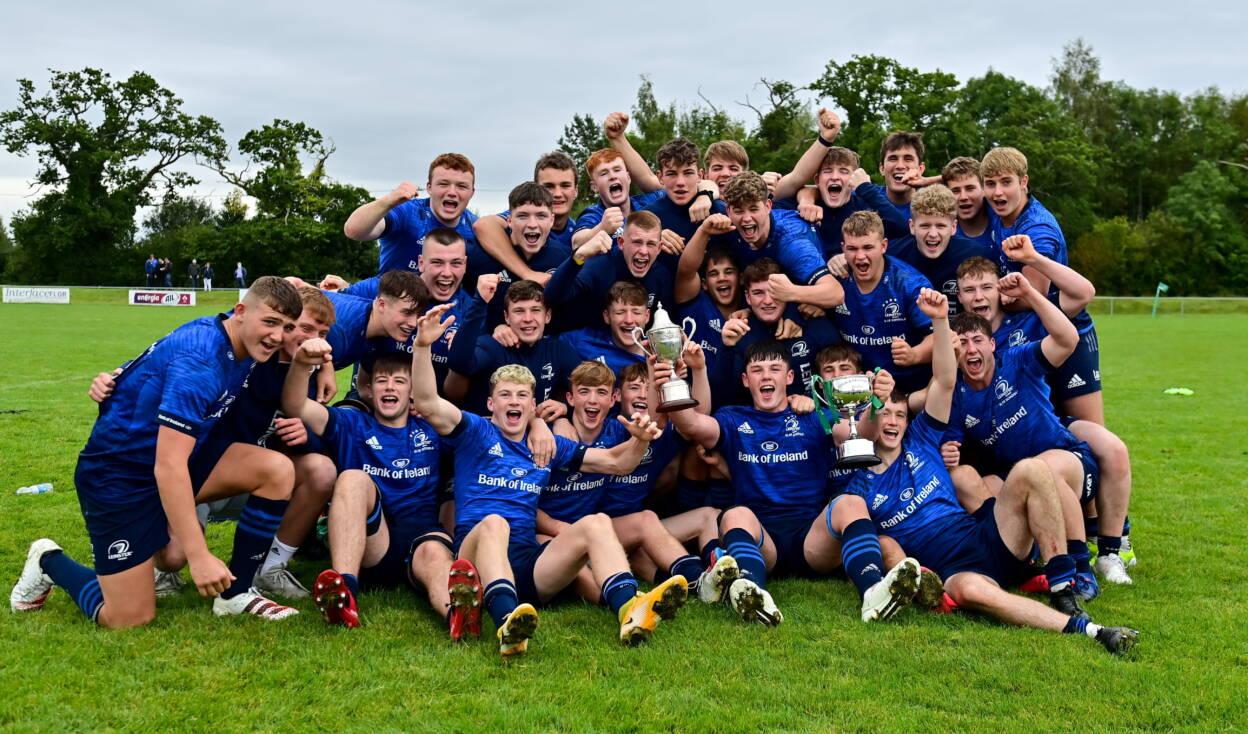