The Ulster Under-18 Schools team produced a late flourish at the IRFU High Performance Centre to earn a 22-15 win over Munster in a spirited PwC IRFU U-18 Schools Interprovincial clash.

Trailing 15-14 inside the dying minutes, Jonathan Gillespie’s Ulster side edged in front courtesy of a superb try from openside flanker Josh Stevens.

Scrum half Jonny McCracken subsequently tagged on a penalty to ensure that Munster were kept at bay.

From a Munster perspective, captain Jacob Sheehan and Aidan Ryan scored a try each to supplement a five-point kicking contribution from Gavin Rowsome. 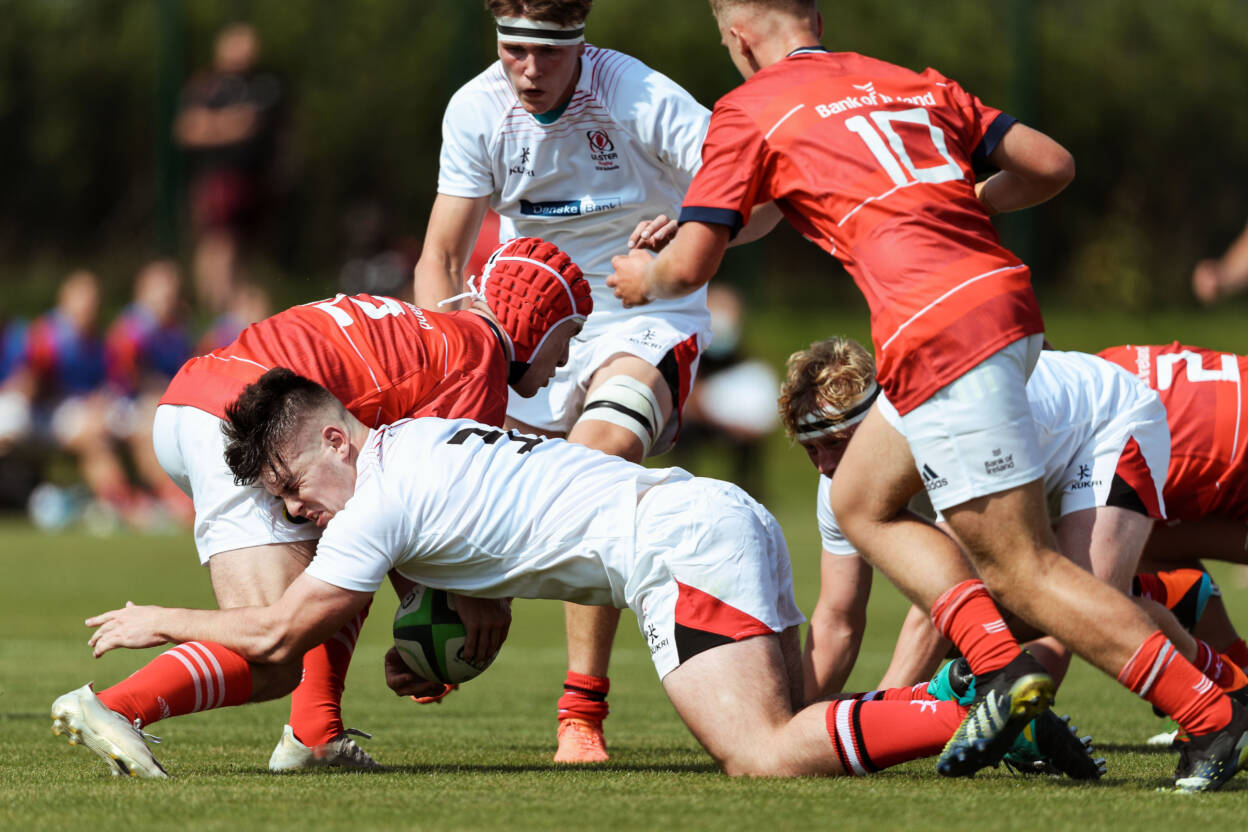 Playing in humid conditions, both teams began this first round contest with ferocious attacking intent. Peter Symington attempted to play in Castletroy College winger Ryan with a delicate kick, but it drifted into touch.

However, it was Munster who duly broke the deadlock in the fourth minute, Sheehan picking up possession inside the Ulster 22 and powering over in the right corner.

Rowsome fired his conversion past the post from a tricky angle and the young Reds’ lead proved to be a short-lived one.

After Campbell College’s Lukas Kenny was held up by the retreating Munster defence, his school-mate Longstaff used his considerable strength to break through for a try on eight minutes.

Ferguson converted to move Ulster ahead at 7-5, their confidence levels on the rise as they proceeded to dominate possession for the remainder of the opening quarter.

Kenny looked set to extend their lead with a 16th minute try, but the final pass towards the winger was adjudged to have gone forward. 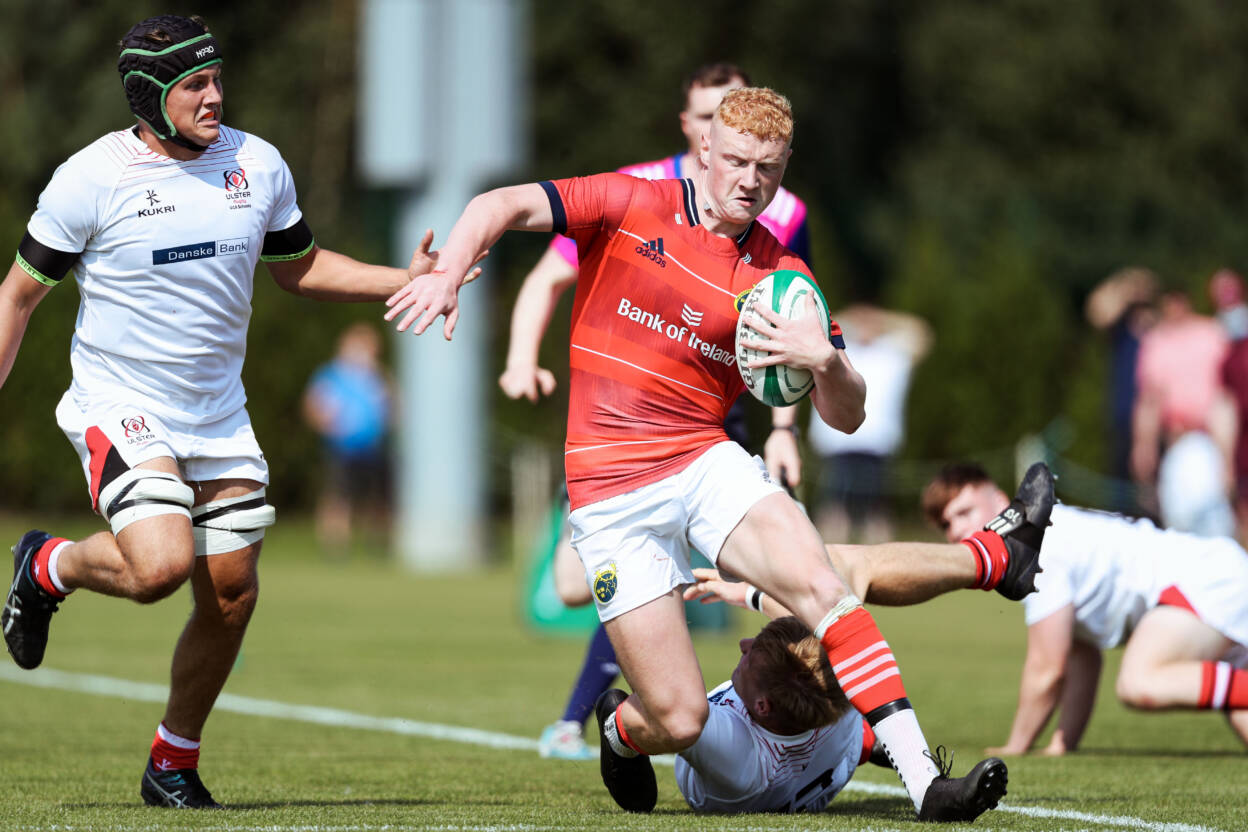 Following this let-off, the Munster Schools outfit started to build inside the opposition half once again and were back in front courtesy of Rowsome’s penalty on the 20-minute mark.

His perfectly-weighted effort preceded the first water break, which did seem to take the sting out of the play for the rest of the opening period.

Munster did lose number 8 Jack Ryan to the sin bin just before the interval but, in his absence, they held firm to bring an 8-7 advantage into the second half.

Despite their temporary numerical deficiency, Noel O’Meara’s charges were in blistering form on the resumption.

An outstanding run from full-back Stephen Kiely presented them with an ideal attacking platform and – after the ball had been recycled to the right flank – his Castletroy team-mate Ryan was on cue to touch down in clinical fashion.

Rowsome’s well-judged conversion stretched the gap between the two teams, but Ulster’s response to this setback was just as impressive. 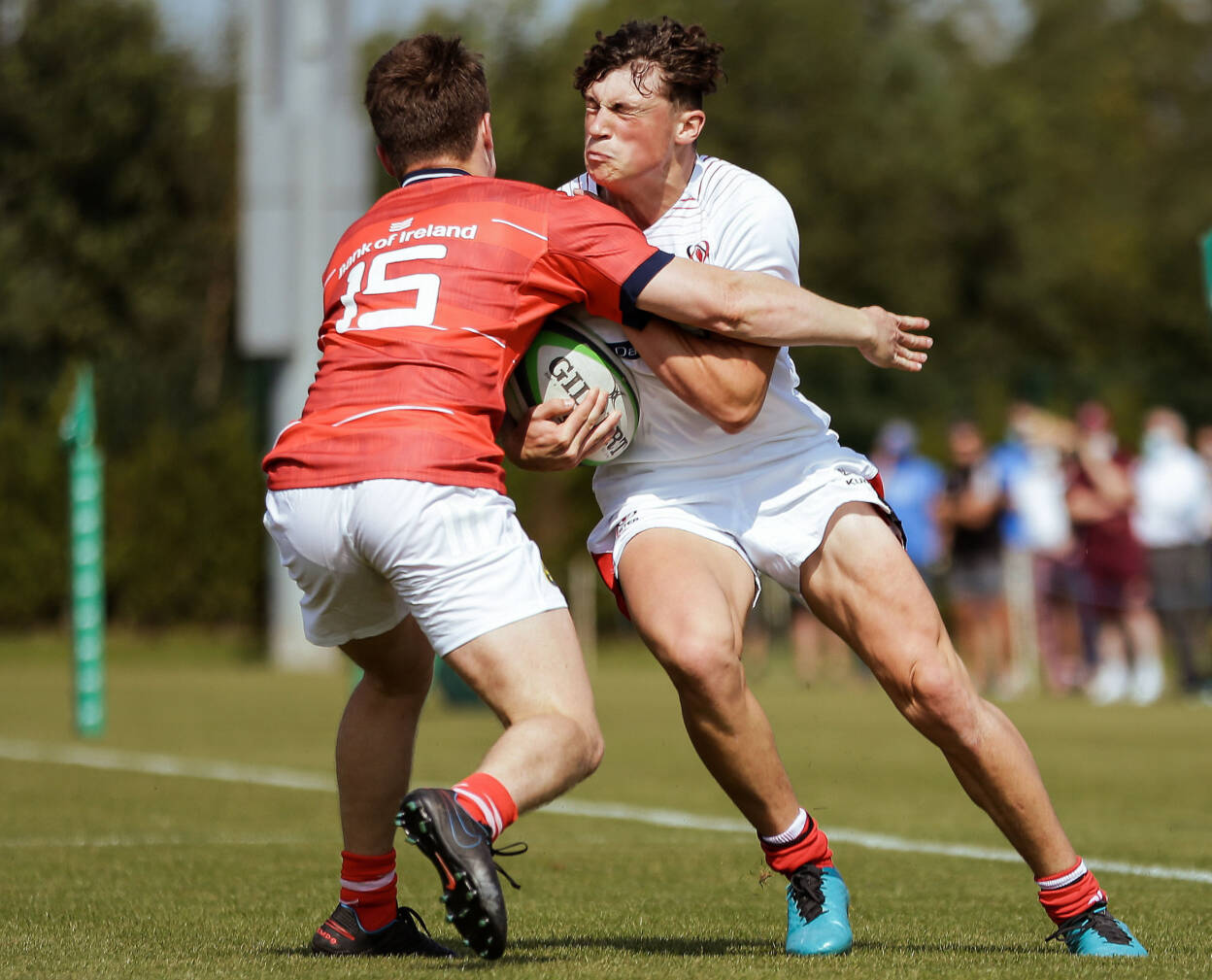 Latching onto the ball deep inside the Munster half, blindside Anderson raced over to the left of the posts. Ferguson split the uprights to reduce the gap to a bare minimum (15-14) and set up a fascinating finish to the game.

Clear-cut try-scoring opportunities were at a premium during the closing stages, even allowing for the fresh legs off the respective benches.

Munster were diligent in defence and seemed set to hold out until Stevens dotted down off an extended set piece move.

Returning to the field as a blood replacement for Tom Crowther, McCracken sealed Ulster’s triumph with a sweetly-struck penalty from the right.