The Leinster Under-18 Schools team burst out of the traps in their first PwC Interprovincial outing of the season, as they handed hosts Ulster a 45-12 beating at Newforge.

Round 2: Ulster U-18 Schools Finish Strongly To See Off Munster

Following the recent postponement of their clash with Munster, Leinster were eager to get going and ran in five tries – including two from impressive winger Jules Fenelon – to lead 31-0 at half-time.

A Lukas Kenny brace saw Ulster rally at 38-12, but Leinster replacement Tadhg Brophy touched down in the final play to seal a 33-point winning margin.

Back on home soil, they struggled for territory early on and Leinster struck in the sixth minute, a free-flowing back-line move seeing Fenelon put fellow winger Hugo McLaughlin over in the left corner.

Pres Bray’s Jack Murphy missed the difficult conversion, but it was a strong start from Leinster who had captain Stephen Smith to thank for winning the initial turnover penalty which set up the attack.

Out-half Murphy showed some nice touches, including a 50:22 kick, and it was his inside pass which sent Fenelon scurrying through from 30 metres out. Supporting full-back Ruben Moloney finished off behind the posts. 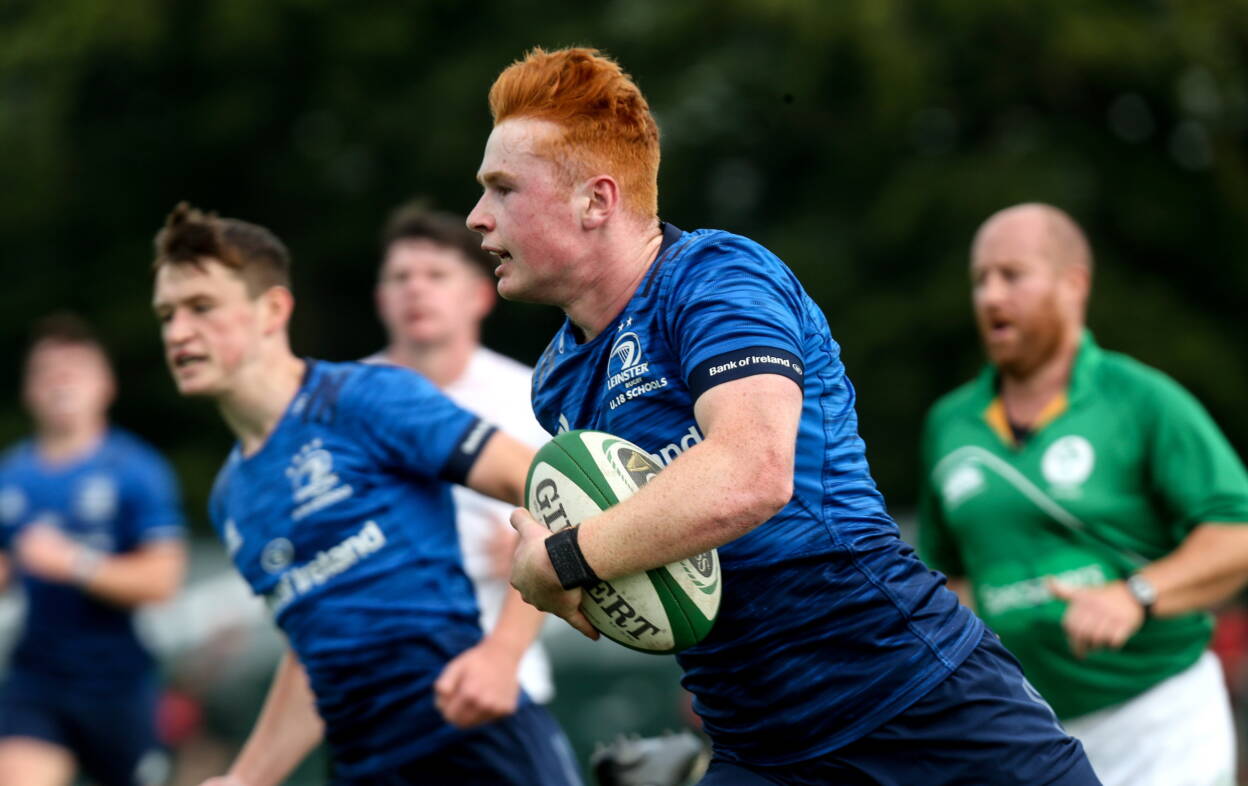 Murphy converted for a 12-0 lead, and just when Ulster – with number 8 Flynn Longstaff standing out in the physical exchanges – looked to be building a decent platform, the visitors struck again.

Midway through the first half, busy hooker Zac Solomon broke menacingly from an Ulster maul, combining with fellow front rower Jacob Boyd to bring the Leinster 22 within reach.

However, Tom Crowther’s attempted kick through failed to come off – under pressure from Murphy – and Inigo Cruise O’Brien scooped up the ball to embark on a surging 70-metre break downfield.

Ulster full-back Conor Drain did brilliantly to race back and haul him down just short of the line, but Luke Kritzinger’s quick clearout gave incoming hooker Lucas Maguire the opportunity to dive over near the posts. Murphy converted from close range.

Solomon led Ulster’s response, breaking down the left touchline from a deft Drain offload, only for a subsequent Harry Hughes knock-on to add to the home side’s growing frustration. 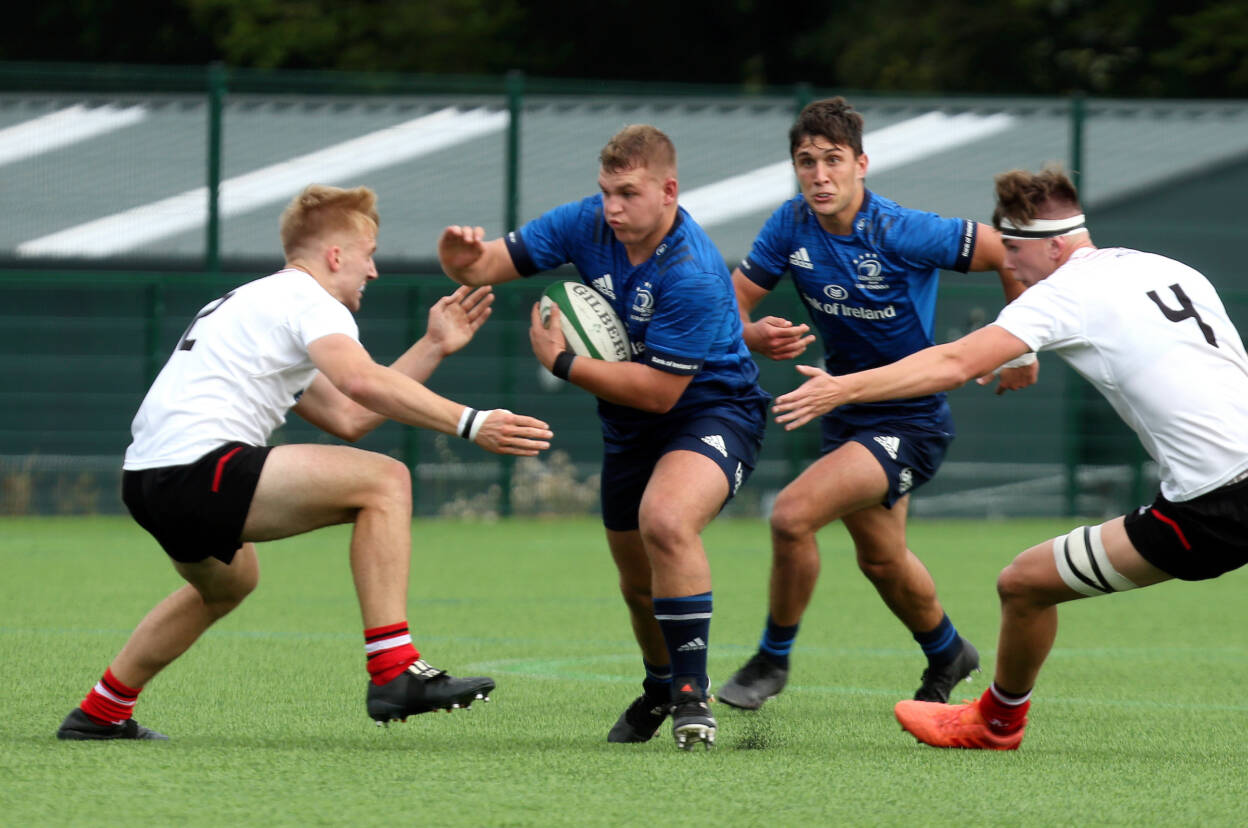 Fenelon squeezed in his second score in the dying seconds, slipping past a tackle near the right touchline. Murphy was bang on target with a terrific conversion from out wide.

Ulster enjoyed better territory on the restart, helped by Josh Stevens’ hard graft at the breakdown and some further Leinster indiscipline. They missed out on a try when centre Matthew Booth was held up.

From his own kick through, replacement David Colbert followed up to score for the visitors after Hughes had taken the ball over his own line.

Into the final 10 minutes, replacement Kenny sparked an Ulster resurgence by sidestepping through for an unconverted try. The Campbell College back added an even better second score, shrugging off three would-be tacklers on his way to the line. 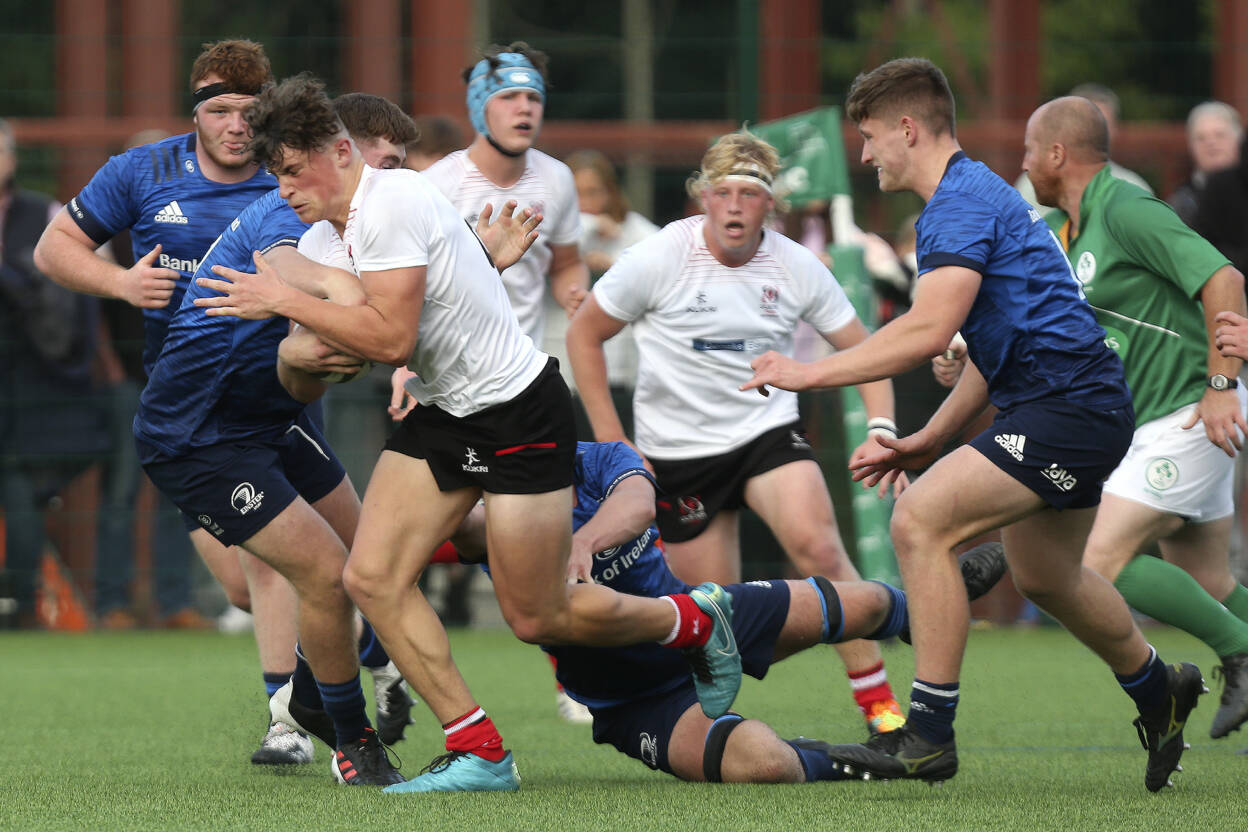 The home pack did the donkey work, earning a penalty advantage from a lineout drive in the Leinster 22, and fellow replacement Ben McFarlane converted from close in.

Nonetheless, it was Leinster who had the final say, Newbridge College’s Brophy snapping up a loose pass from Tristan Ferguson to dash in by the posts. Murphy tagged on his fifth successful conversion.