Ulster twice came from behind to earn a 12-all draw with Connacht, who played the final quarter of this Vodafone Women’s Interprovincial clash without red-carded out-half Nicole Fowley.

Round 3: Pearse On The Double As Munster Regain Interpro Crown

The opening act of tonight’s final-round double header at Energia Park was an enthralling encounter, and it began in brilliant fashion for Connacht with centre Shannon Touhey touching down inside 90 seconds.

Ross Mannion’s charges led 7-0 at half-time, but pressure from a resilient Ulster led to yellow cards for the westerners’ Moya Griffin and Ursula Sammon, either side of the break.

Fowley saw red for allegedly striking Ulster scrum half Jemma Farrell, who was sin-binned for retaliating. As the tension increased, underdogs Ulster found their scoring touch.

With evergreen prop Ilse van Staden popping up regularly in attack, replacement Helen McGhee was freed up to score in the 64th minute. Captain Beth Cregan landed the levelling conversion. 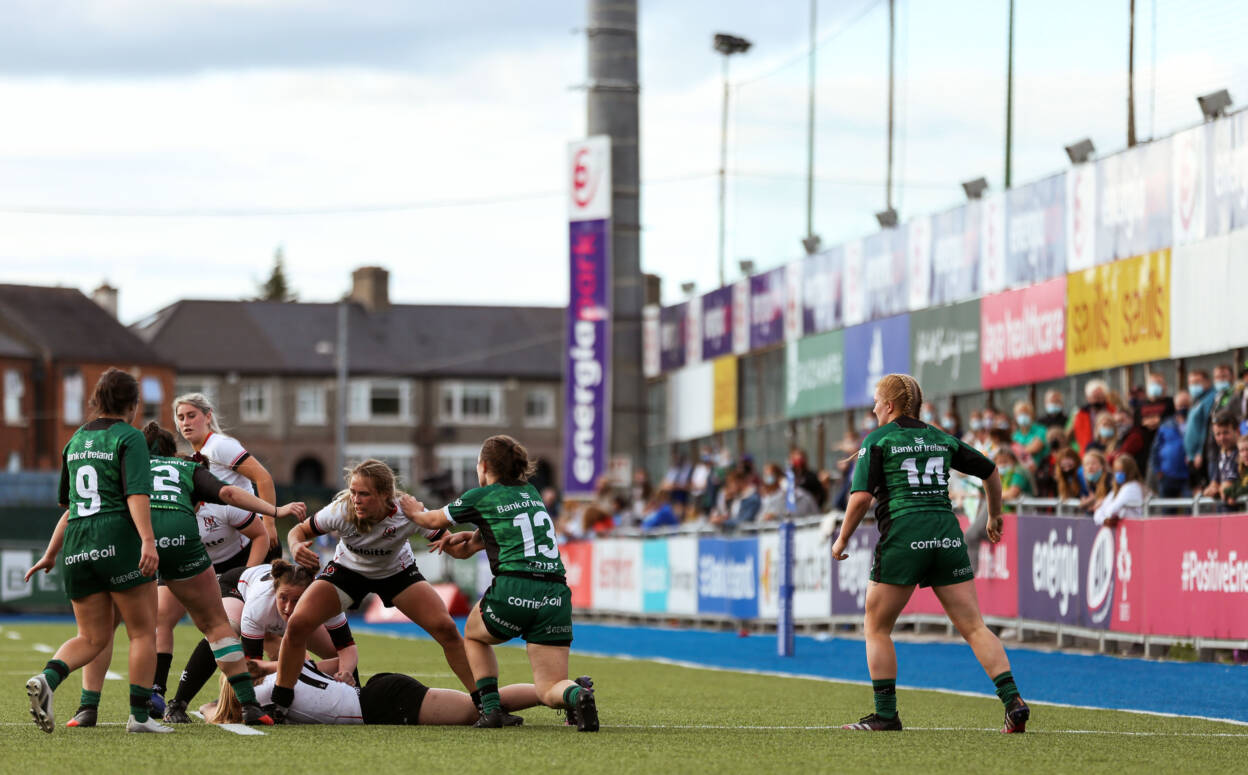 Back came Connacht, working numbers on the right for winger Sammon to hit back just two minutes later. They were on the cusp of an elusive victory after putting it up to both Leinster and Munster.

A draw, which earns them third place overall, was the best Connacht could hang on for, though. Ulster fought back, long-striding replacement forward Shannon Buller showing impressive pace to make the line in the 71st minute.

Connacht scored from their very first opportunity, Catherine Martin using scrum ball to carve open Ulster’s midfield and she sped up into the 22 before laying off for centre partner Touhey to finish off. 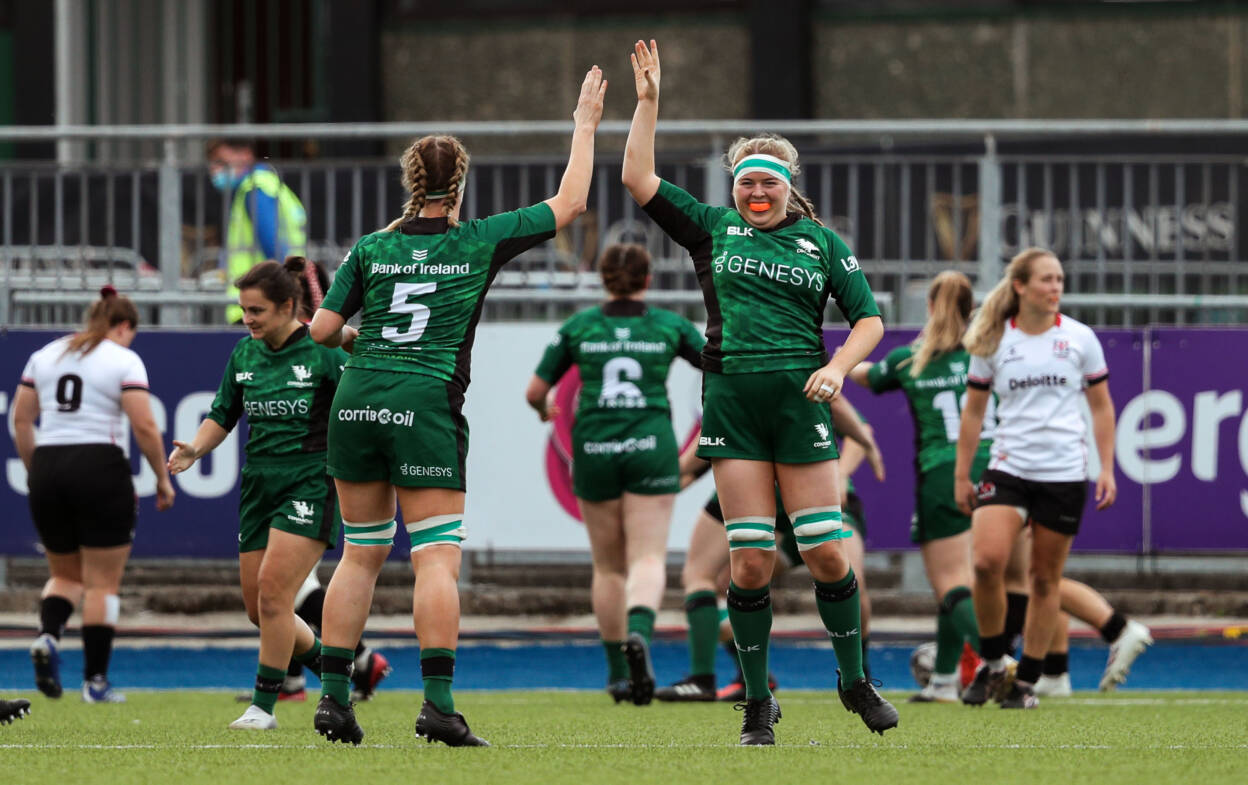 Following Fowley’s conversion, the westerners continued to find gaps, Orla Dixon cutting in off her wing and Martin threatening again before Kelly McCormill inspired Ulster with a turnover penalty.

Direct running from Ella Durkan and Fiona Tuite ignited the Ulster attack, but they were unable to capitalise on a loose Mary Healy pass while Connacht reshuffled due to a Kate Feehan injury.

Into the second quarter, there were some big defensive hits going in with the Ireland-capped Claire Boles driven into touch by Connacht loosehead Julia Bauer.

Both front rows were regularly seen in open play, this time nice hands from van Staden putting Stacey Sloan charging up into the Connacht 22.

However, hooker Griffin put enough pressure on at the breakdown to win a relieving penalty for Mannion’s side, after Ulster had turned down a kickable penalty.

Cregan and her team-mates dominated territory leading up to the break, with Farrell kicking well and Connacht skipper Healy guilty of a second wayward pass.

Nonetheless, Connacht defended grittily after Griffin was slow to roll away and saw yellow. A frustrating final knock-on from scrum half Farrell meant Ulster emerged scoreless in the final seconds.

With loosehead van Staden to the fore, Ulster earned two scrum penalties on the restart, and some powerful running by Durkan and Farrell offered them further encouragement.

Connacht had to absorb further pressure after Sammon was binned for a high tackle on Fern Wilson, yet fellow winger Dixon stood up to the task with a vital turnover when Ulster looked destined to score.

The tireless Galwegians winger soon showed her breaking ability, haring through past halfway and a kinder bounce might have led to a try from her own chip-and-chase.

The game took a big turn in Ulster’s favour on the hour mark, as referee John Carvill reached for his red card on recommendation of the standside touch judge.

Fowley and Farrell were dumbstruck as they both received cards, the Connacht out-half for an apparent strike to the face, during an off-the-ball incident, and Farrell for retaliating.

Just before Sammon’s return from the bin, Ulster strung together a telling attack, van Staden the focal point as she barged through into the 22 and offloaded for Taryn Schutzler to veer out to the left where Ashleigh Orchard put McGhee over. 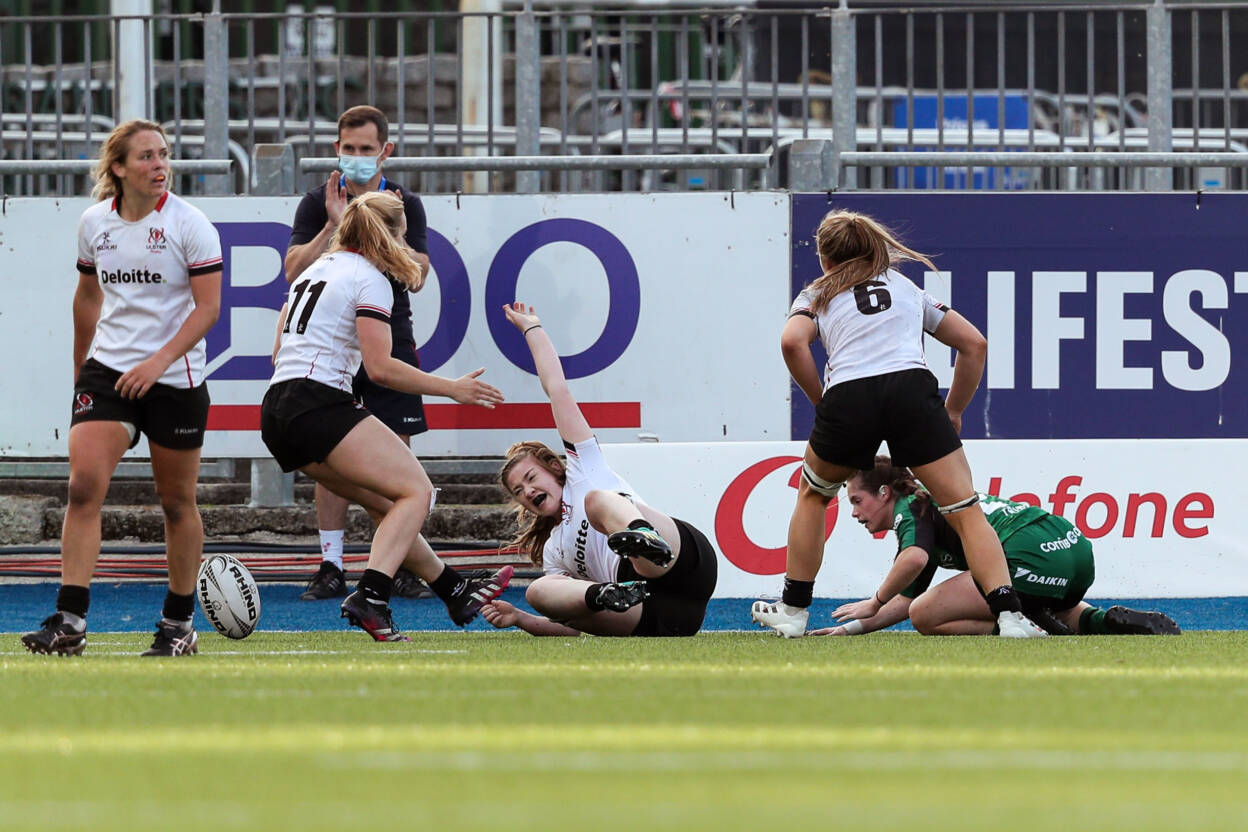 The all important levelling conversion was fired over by the multi-talented Cregan, but Connacht again showed their battling qualities, quickly getting back on the front foot.

Their pack, with replacement prop Aifric O’Brien picked out as the player-of-the-match, got back into scoring range with their pick and drives. Space opened up on the right and Nicole Carroll and Touhey released Sammon to score. 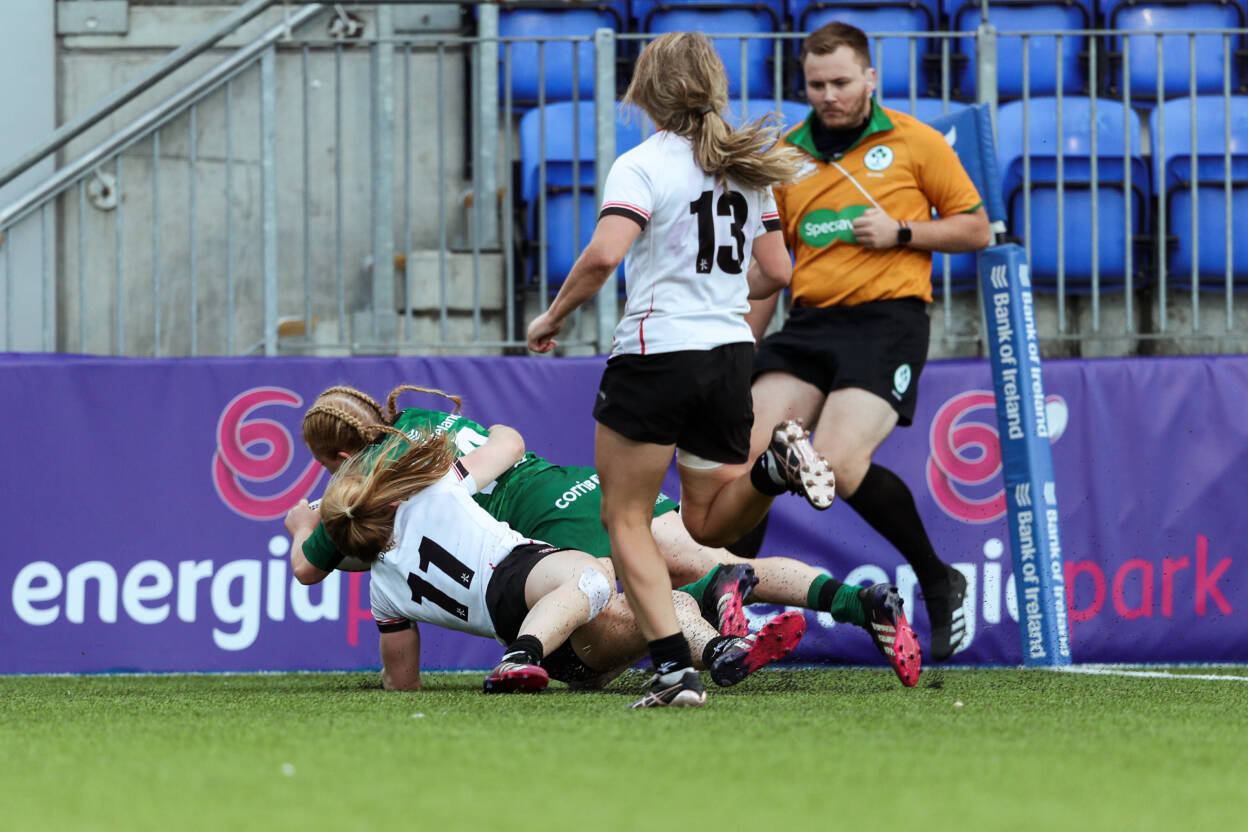 Full-back Carroll miscued the conversion, leaving five points in it. Just when Connacht appeared to have cleared the danger five minutes later, they were caught out from a quickly-taken Ulster lineout.

The northerners were able to create an overlap, with van Staden and Cregan showing their class once more as they freed up Buller for a terrific burst to the line, leaving Sammon in her wake.

Having come back on following her binning, Farrell stepped up to take the conversion but missed the target from the left. Ulster tried heroically to get back downfield, but a final knock-on confirmed the stalemate.