All four provinces came together for the first time this season as the PwC IRFU Under-18 Women’s Interprovincial Championship stepped it up a notch at St. Mary’s College RFC.

Connacht’s determination and resilience over two games of the PwC Interprovincial Series paid off with a rousing 7-5 victory over defending champions Munster at Templeville Road.

It was an entertaining and competitive affair for the full 70 minutes. Connacht had defended well in the face of an overpowering Leinster attack last week, but added a cutting edge in attack with this performance.

Molly Boote was a menace with ball in hand. She raced onto an intercept just as Munster were getting their offload game firing in the first quarter, and Eloise Clarke had to be forced into touch just metres out to prevent a try.

The strike running of Carrick-on-Suir full-back Ellen Boylan looked like Munster’s main attacking threat early on, while their kick-chase was causing problems for Connacht too.

Kate Flannery had one swerving run in midfield and Saskia Wycherley, cheered on from the stands by her brother Fineen, was faultless in the first half as Munster’s lineout winner.

Saskia pulled down another clean lineout after 32 minutes, but Munster’s exit kick from inside the 22 was caught brilliantly by Boote. She found Éabha Nic Dhonnacha who popped the ball off to Ballina’s Sarah McCormick to charge for the line.

Nic Dhonnacha’s conversion was to prove crucial, and with Connacht 7-0 to the good at half-time, they went close to scoring again soon after the restart.

Munster hesitated after a knock on in front of their posts and Roisin Maher dived on the loose ball. It was recycled to out-half Aifric Ní Ghibne, who was unfortunate to be held up in crossing the line.

Despite some inspirational turnovers from Connacht captain Ivana Kiripati and her back row colleagues, Munster’s efforts were deserving of a score and it arrived in the 66th minute.

A crash ball carry from skipper Shauna Maher set up the overlap for Boylan to cross the whitewash out wide. Flannery’s difficult conversion fell short and Connacht kept their noses in front.

Munster’s scrum earned them one last chance, but Connacht’s work-rate at the breakdown was worthy of winning the game, and it fell to prop Roisin Maher to kick the ball out of play and spark scenes of jubilation for the young women of the west. 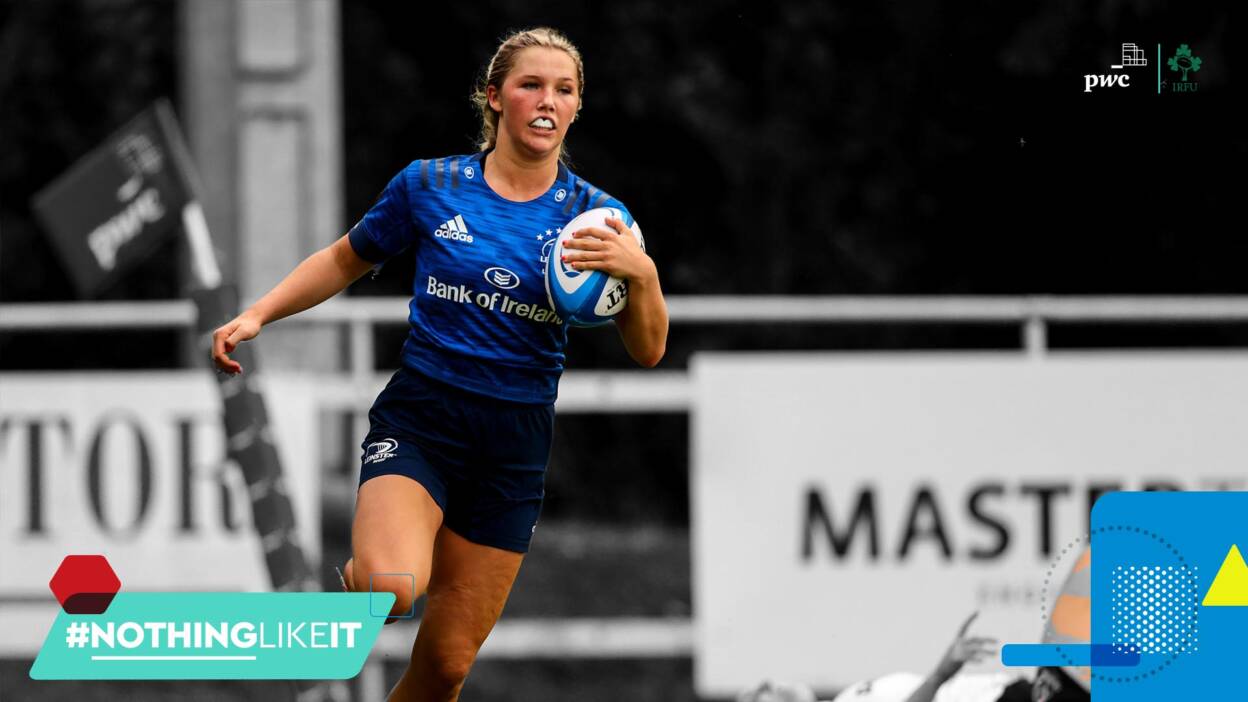 Leinster built on their impressive opening to the PwC Interprovincial Series with a 54-0 triumph over Ulster at St. Mary’s College RFC.

The central location gave Talent ID coaches another chance to cast their eye over all four provinces, and there were plenty of promising players on show for Leinster in an eight-try performance.

Ulster, playing in their first game of the campaign, did plenty of things well. They were lively with ball in hand in the opening exchanges and a half-break from Enniskillen’s Moya Hill threatened to carve Leinster open.

The line speed in defence and depth in attack that Leinster showed on day one at the IRFU HPC were on show again.

Aoife Dalton made an early break, and the score looked gone when Sophie Barrett made the covering tackle, but the young Tullamore centre managed a superb offload for the onrushing Erin King to score.

The lead was 14-0 after 20 minutes when Katie Whelan was sharpest, breaking through for her third try of the tournament after Ulster had misjudged a clearance kick.

Dannah O’Brien slotted over the touchline conversion with ease on a day that saw her land all four of her conversions and pin Ulster into their own half with some great tactical kicking out of hand.

Ulster responded with a spell of decent territory. Their back-three looked equal to Leinster’s counter-attack and Rebecca Mann was able to use the touchline as an extra defender on more than one occasion.

Lucy Thompson was a fingernail away from an interception for Ulster on the half hour mark. The loose ball instead went to Leinster winger Alanna Fitzpatrick who was able to dance through the cover and score under the posts.

Leinster’s lead was 28-0 at the interval when captain Aoife Wafer stepped into the passing channel to pull off an intercept of her own.

Wafer and her team-mates managed to step things up after the break. Their bench maintained momentum – Abby Moyles hitting three conversions and multiple overlaps gave MU Barnhall’s Emma Tilly plenty of space to score a brace of tries.

Ulster still had their moments with some decent exit kicking from Hill and out-half Farrah Cartin McCloskey. Brave tackling from Jana McQuillan and strong carrying from Sadhbh McGrath typified their resilience.

The day was Leinster’s, though, as Fitzpatrick scorched home for her second try and Aoife Dalton popped up with an intercept in the final moments to romp clear from her own half.