In a game played in all four seasons at Energia Park, the Leinster Under-19s beat Munster 27-7 to begin their PwC IRFU U-19 Men’s Interprovincial campaign in impressive fashion.

Photo Gallery: Leinster And Munster Kick Off U-19 Interpros

Prop Evan O’Riordan’s try on the stroke of half-time edged Munster into a 7-5 lead, responding to an earlier effort from Leinster lock Jim Peters.

The wet weather gave way to sunshine on the restart, with Leinster captain Sam Prendergast taking advantage to kick his side in front from a penalty.

Andy Wood’s charges went 15-7 up when out-half Prendergast kicked through for winger James Nicholson to touch down.

They added two more tries in a rain-lashed final ten minutes to seal their bonus point. Diarmuid Mangan, via a lovely George Hadden pass, and replacement Gus McCarthy both crossed.

This first round clash got off to a scrappy start with the ball being spilled everywhere in very poor handling conditions. However, both sides gradually made their mark.

Newbridge College’s Prendergast missed a fifth-minute penalty, but at the afternoon’s first scrum, on a Munster put-in, Leinster put their arch rivals under severe pressure. 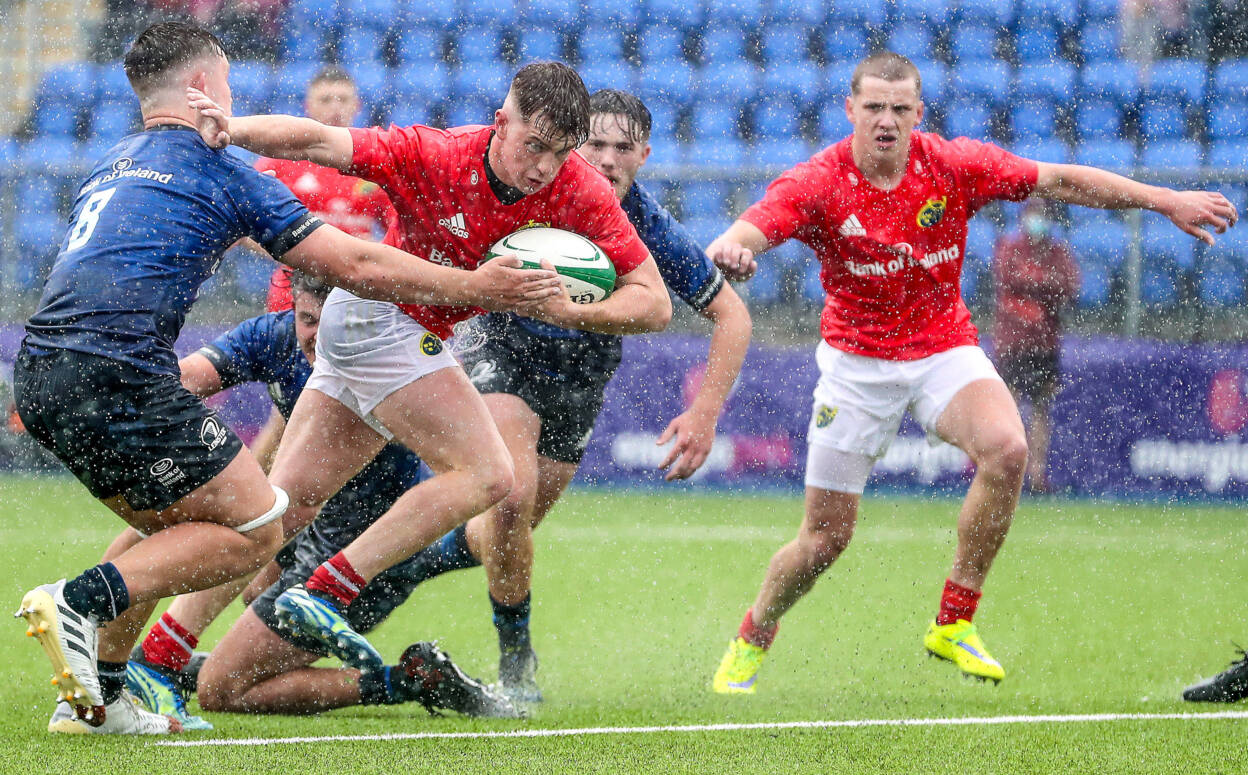 Indeed, the set piece gave the Blues the platform for the opening score. From a five-metre scrum, Leinster went through the phases and Portlaoise forward Peters drove over for an unconverted try.

Both defences were on top in the wet conditions, which made try-scoring opportunities a rare occurrence. Leinster missed out on another try when losing the ball forward over the line.

Munster hit back with a great turnover, won by blindside Rudhan Quinn in the 28th minute, and took their chance well just before the break. 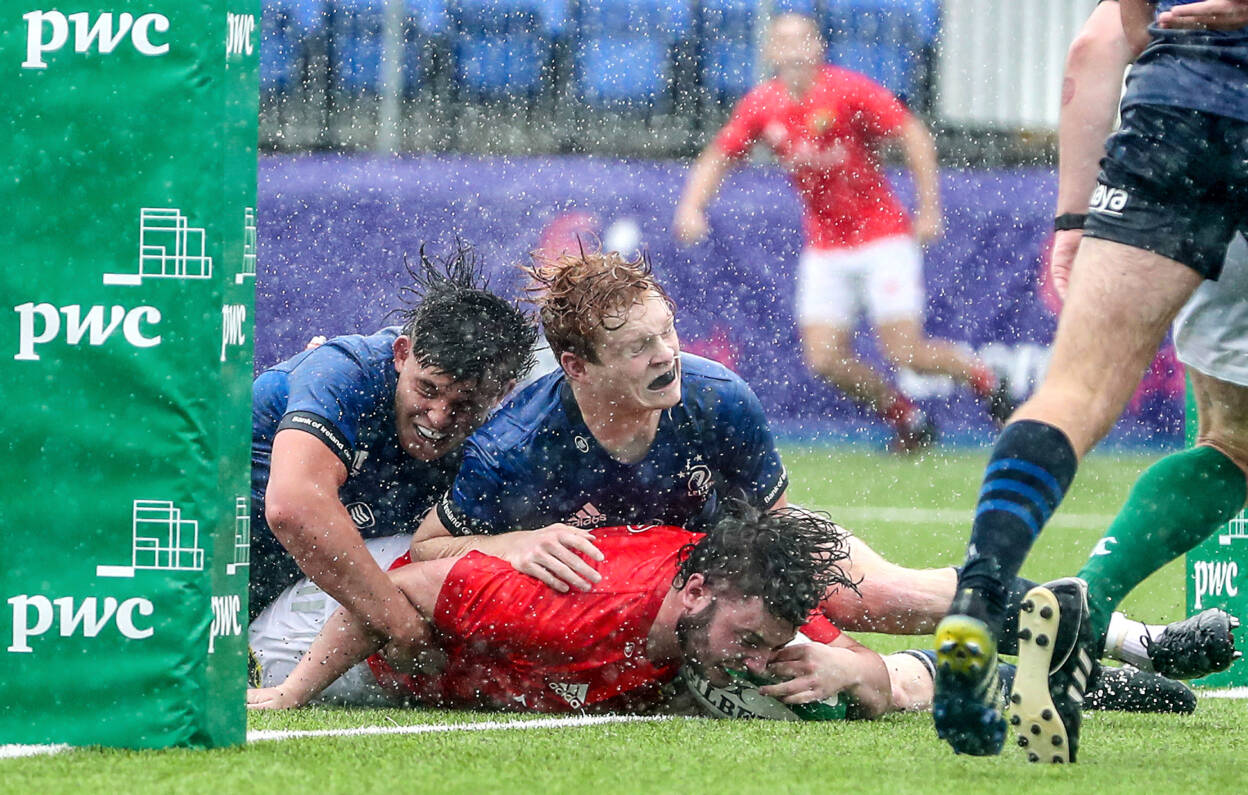 Cork Constitution youngster O’Riordan went in under the posts for a well-taken try, converted by Munster captain Jack Oliver whose kick split the teams at the turnaround.

Three minutes into the second half, Leinster retook the lead with Prendergast’s only successful penalty. It was all to play for with some evenly-matched phases.

It took a great dink from Prendergast to open up the Munster defence, setting up Nicholson from St. Michael’s College to notch Leinster’s second seven-pointer. 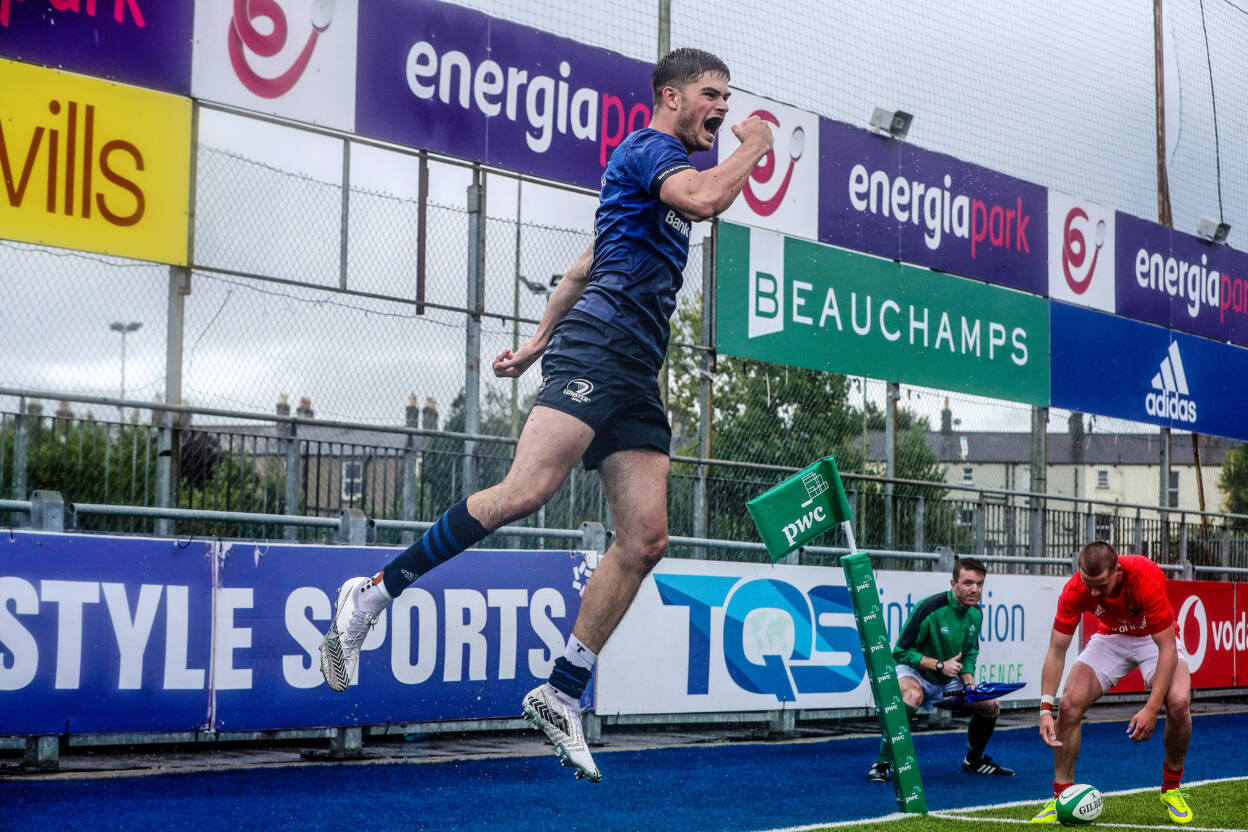 As the half wore on, Leinster looked to be in control of proceedings and scored again at a crucial stage. Newbridge’s Mangan went over in the corner to make it 20-7.

The tigerish Leinster defence did not give Munster an inch during the final minutes. On a challenging day weather-wise, the aggression and physicality of the victors’ forwards made the difference.