Bundee Aki got on the scoresheet and Iain Henderson enjoyed a winning debut as captain in the British & Irish Lions’ comprehensive 54-7 win over the Cell C Sharks in Johannesburg.

The Lions put a frustrating Covid-19-affected day behind them with an eight-try performance, led by hat-trick heroes Duhan van der Merwe and Josh Adams.

The wing pair were clinical with their finishing – Adams now has eight tries in three matches – and Aki and Louis Rees-Zammit also crossed the whitewash.

The Sharks, who trailed 26-0 at half-time, bit back with a fine 50th-minute try from James Venter, but the Lions’ greater firepower allowed them to push clear in their first midweek match of the tour.

Warren Gatland had to make extensive changes to his originally named matchday 23, following the announcement that one of the players had tested positive for Covid-19 following PCR testing today.

There were twelve close contacts for the player and a member of management who both tested positive, the disruption meaning that Scotland’s Finn Russell was the only back on the bench.

Tour captain Conor Murray and Tadhg Beirne were among the players that were withdrawn from the selected squad, with Owen Farrell and Ali Price leading a rejigged back-line and Henderson at the helm of an unchanged pack. 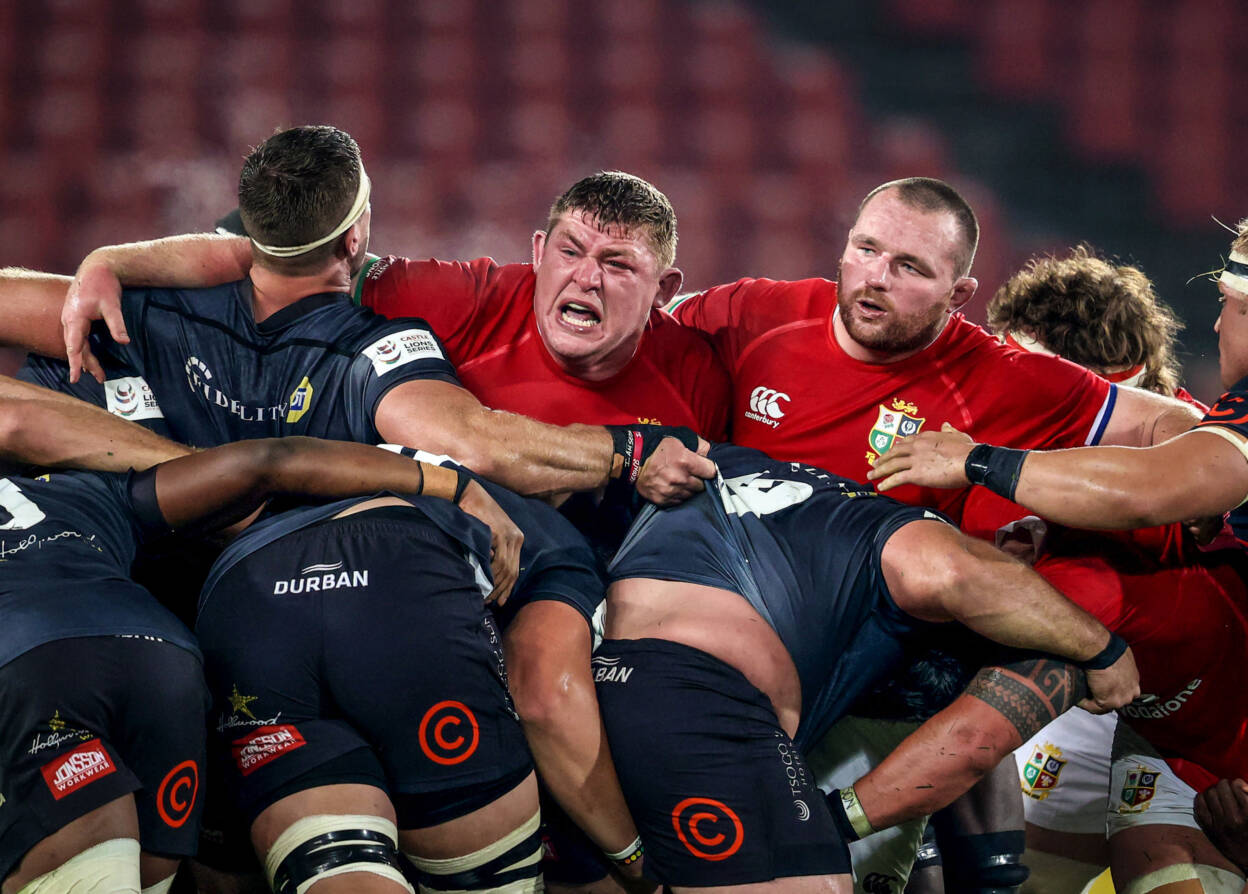 Ulster skipper Henderson was involved in the build-up to the second-minute opener, barging up into the Sharks 22. Nice offloads from Farrell and Rees-Zammit put Adams over to the left of the posts.

The Lions soon took their hosts through nine fast-paced phases, putting the impressive Sam Simmonds through a hole and he passed wide for van der Merwe to round in towards the posts. Farrell converted again, doubling the lead to 14-0.

A bustling break from noted Sevens star Werner Kok showed what the Sharks could do in attack, however the link play was the missing element and they remained scoreless.

Midway through the first half, Kok was sin-binned as the Lions threatened on the counter. He halted a surging run from Elliot Daly but then went straight off his feet. 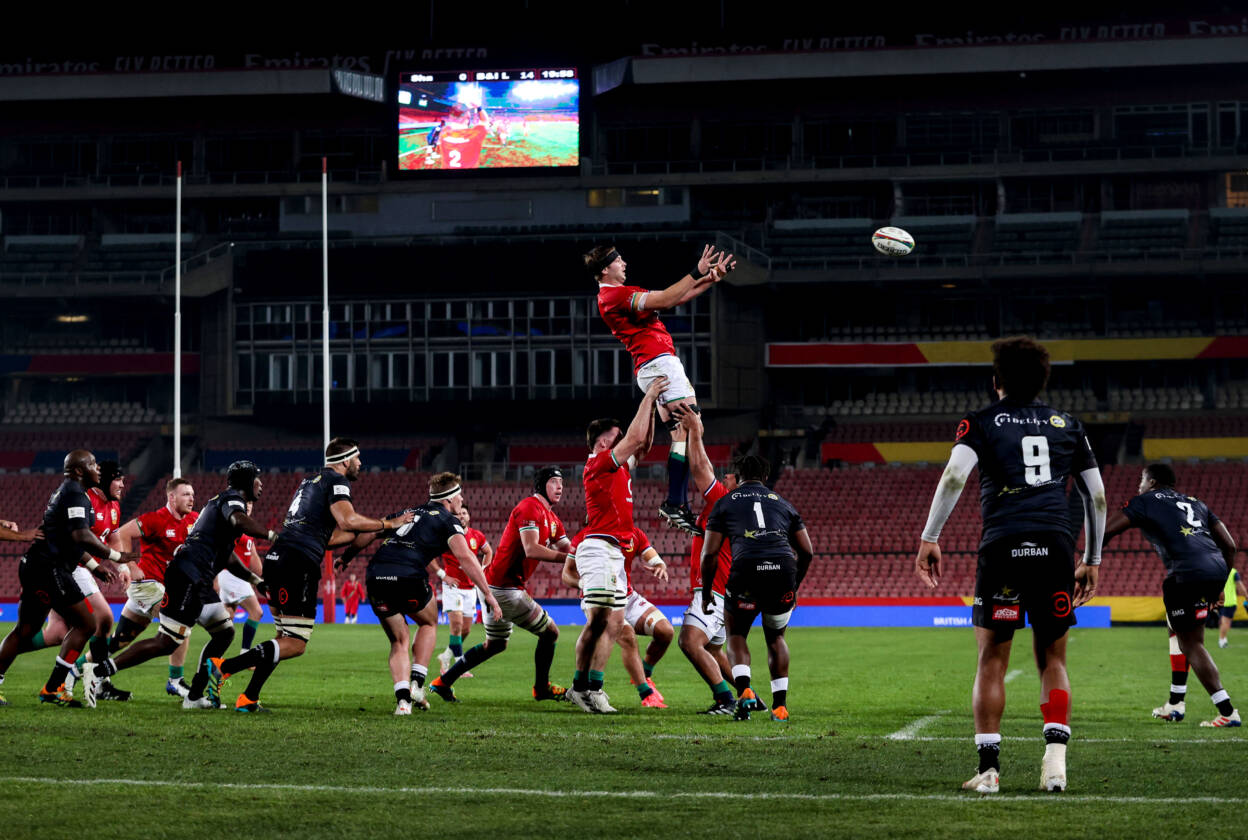 The tourists had a near miss when Luke Cowan-Dickie knocked on over the line, and then the ball evaded winger Rees-Zammit’s grasp as he looked to score from a Farrell kick.

25 minutes in, things clicked for the Lions when Farrell stabbed a long kick through and van der Merwe was able to dribble through and get the touchdown in the left corner. 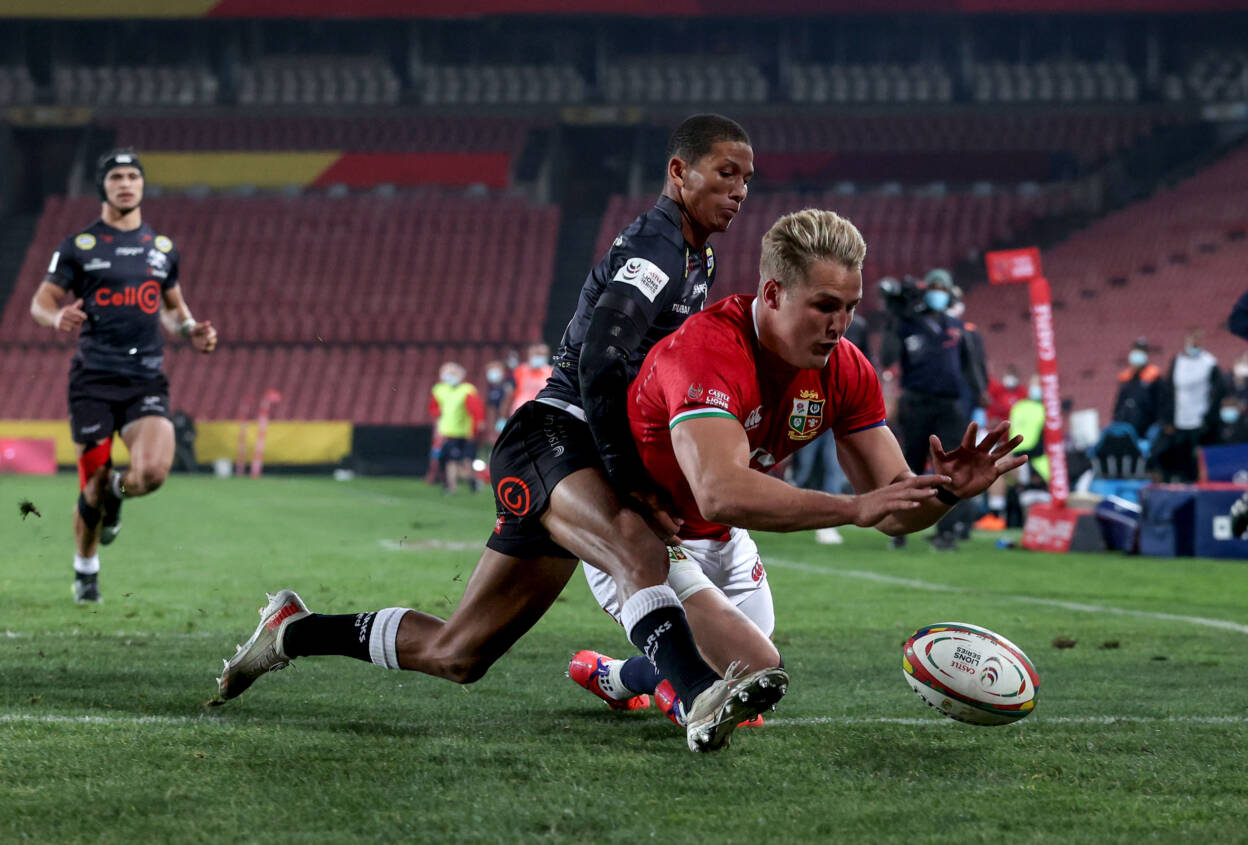 Number 8 Simmonds was showing his running ability in broken field, yet the Sharks’ defensive scramble ensured they kept the deficit at 19 points.

Right on cue just before the interval, hooker Cowan-Dickie used maul possession to break a tackle, and from the ensuing ruck, Aki picked up to pile over for a converted try.

Although the Connacht and Ireland star clamped down for an early second half turnover, the Sharks used a lovely bit of interplay down the right wing to spring Venter clear for their only points.

The home side, whose scrum had some good moments, displayed plenty of endeavour, none more so than winger Kok who collected his own chip kick before the supporting Ruben van Heerden was hauled down. 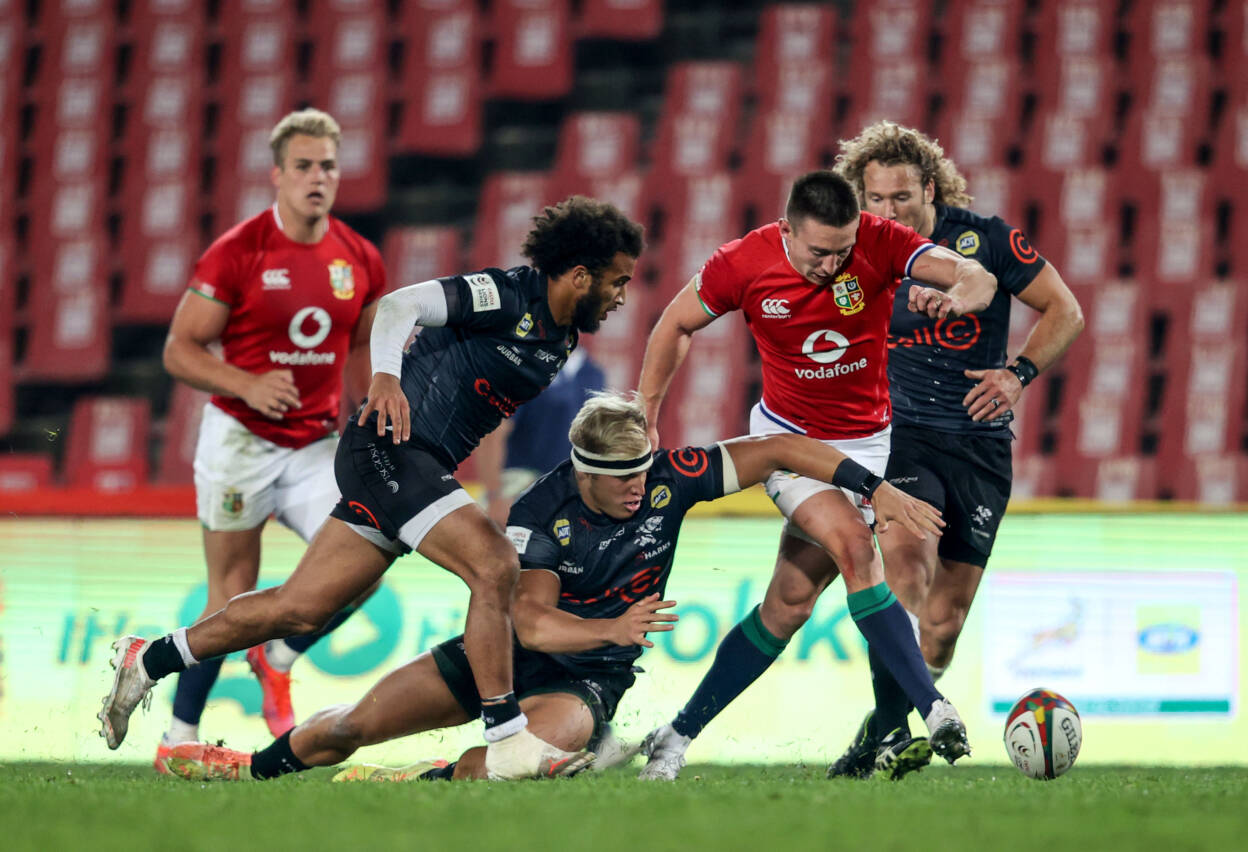 Nearing the hour mark, Adams showed his poacher’s instincts. The Sharks handed back turnover possession, allowing the Wales flyer to hack through and ground the ball, following an Abrahams blunder on the line.

Replacement Russell converted and also added the extras to the Lions’ remaining three tries. It could have been more – Josh Navidi had a score ruled out with 10 minutes remaining.

Adams turned provider for countryman Rees-Zammit, running a kick back before passing out of a tackle for the 20-year-old speedster to scamper clean through from his own 10-metre line.

Daly’s one-handed flick of a pass released van der Merwe to complete his hat-trick. Adams did likewise in the 77th minute, thanks to his own acceleration and the passing skills of Daly, Adam Beard and Taulupe Faletau. 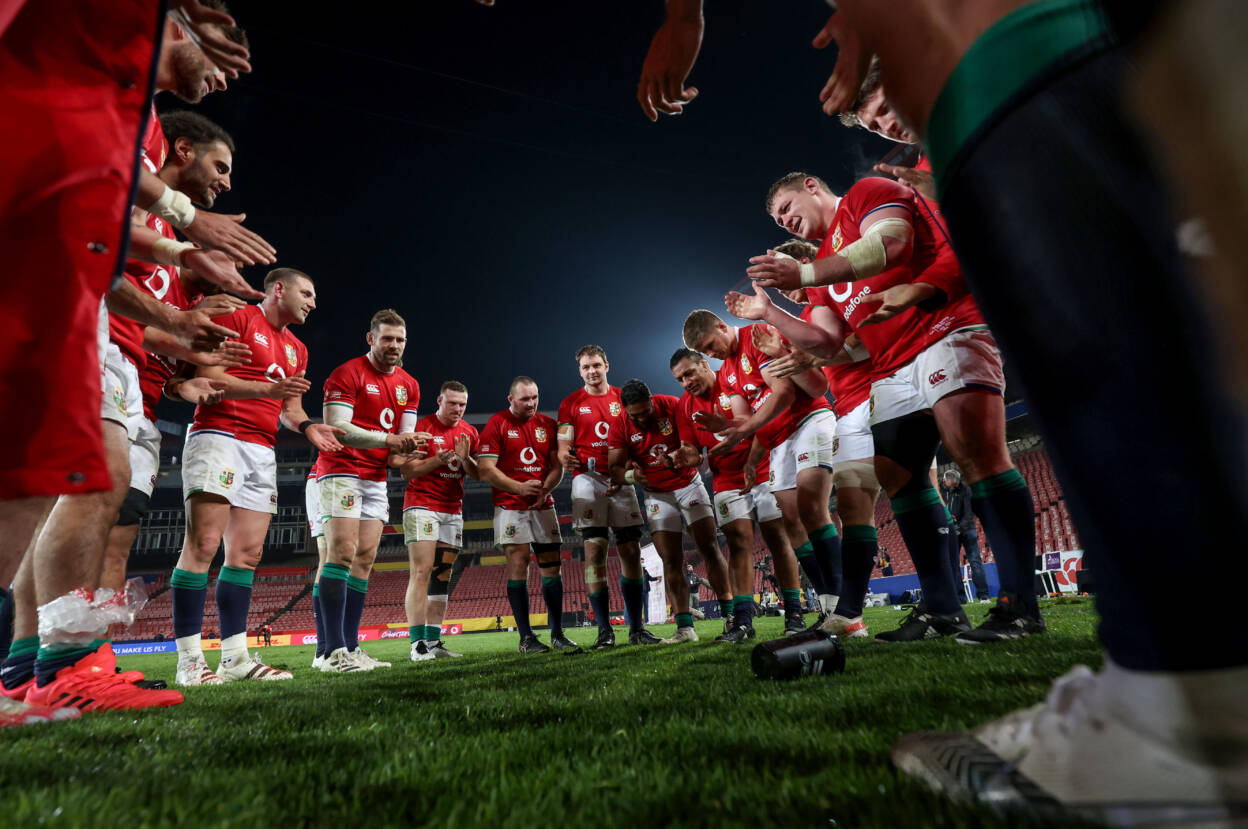