This season’s Guinness PRO14 Chairman’s Award has been awarded to the six medical members of the Championship’s Medical Advisory Group in recognition of the critical role they have played in ensuring the campaign was completed safely.

The group was chaired by Dr Michael Dunlop, Edinburgh Rugby’s club doctor and medical consultant for the PRO14.

Due to the extensive workload required, the group took over from the Championship’s medical sub-committee (headed by Dr Simon Davies until June 2020) in the early stages of the Covid-19 outbreak in 2020 and carefully guided the tournament team at PRO14 Rugby as the Guinness PRO14 plotted a path back to the pitch.

Since then, this group has been a key decision-maker regarding health and safety protocols adopted by the Championship and its teams while providing a constant link to local health authorities in each territory.

Additionally, the group provided PRO14 Rugby with a constant flow of information as the pandemic evolved and new research and reports from the medical and sports sectors became available.

Ultimately, this group was also tasked with providing recommendations as to whether games could be played or if postponements were necessary.

All of this occurred while each member had primary responsibilities to their home Union or club/province and even during peak periods when international and club rugby overlapped.

Dominic McKay, Chairman of the Guinness PRO14, said: “Summing up the contribution made by our Medical Advisory Group is very simple – without them we would not have been able to kick a ball during this pandemic.

“Club rugby, and indeed the Guinness PRO14, had to set a high standard when elite sports returned to the field last summer and the protocols and guidance provided to us by the doctors and medical leads at our Unions were responsible for keeping players, coaches, match officials and everyone at our stadiums as safe as possible.

At no point did our Medical Advisory Group take their foot off the pedal. Throughout this pandemic they have been at the leading edge of our medical wing, with so many of our staff feeding into them in trying circumstances where so much has been co-ordinated remotely.

“The success in returning club rugby to the pitch opened the door for Test matches and international competition – events that only increased the workload for our medics.

“I am privileged to acknowledge the efforts of Dr Vincenzo Ieracitano, Dr Rod McLoughlin, Dr James Robson, Dr Michael Dunlop, Clint Readhead and Prav Mathema as a very small token of gratitude to themselves and to their colleagues.

“I would encourage anyone who has been heartened by watching our clubs/provinces and countries in the past six months to pass on their thanks to the medical teams around the sport, including those I have mentioned.

“In a team game it is near impossible to think of a group of people who have contributed more to the success of safely returning to the field and staying there.” 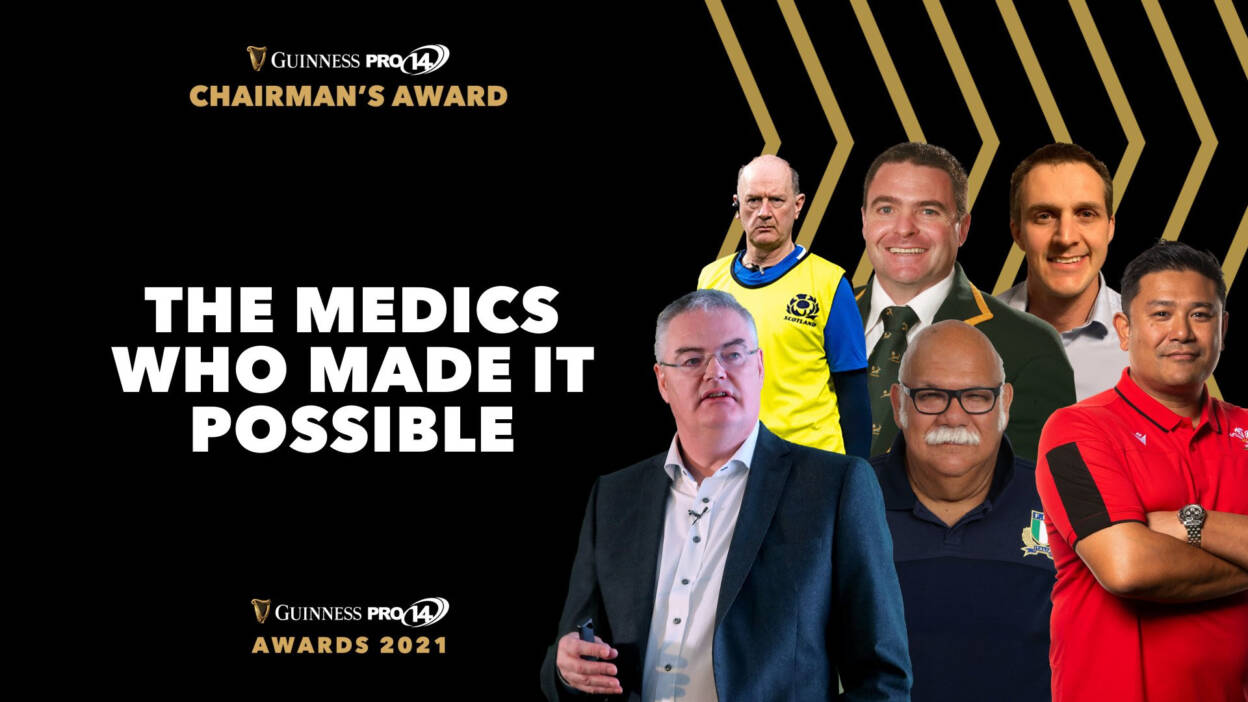 A former flanker for the CUS Genova Rugby team in Genoa in the 1980s, Vincenzo ‘Doc’ Ieracitano has been a long-time servant of Italian rugby. Team doctor for the Azzurri in their first Six Nations back in 2000, he has been working with the FIR ever since in various medical positions before being named Chief Medical Officer in 2012.

An Emergency Room expert, he took part in many World Rugby safety and health committees and he also moved back to Italy team doctor for the 2015 Rugby World Cup in England.

Dr Rod McLoughlin is the Director of Medical Service at the Irish Rugby Football Union.  Rod joined the IRFU in 2013. His previous roles include Director of Medicine at the Irish Institute of Sport and Medical Officer at the Olympic Council of Ireland, Rod has also been Medical Officer to the Wicklow Gaelic football team and a member of the GAA’s Medical Scientific and Welfare Committee.

Dr James Robson has been doctor to the Scotland national team since 2002 but his efforts with the team actually began in 1991 as physio on the Scotland tour to north America. He then went on to serve spells as physio and/or doctor with Scotland ‘A’ and Scotland Sevens while also being chosen as part of the medical teams for the 1993 British & Irish Lions tour to New Zealand.

Clint Readhead, a 50-year-old from Cape Town, has been in charge of the medical department of SA Rugby since 2008 having previously served as physio for four years for the Springboks. That term culminated in a World Cup victory in France under the stewardship of Jake White. He has played an influential role in the establishment of SA Rugby’s rugby safety programme – BokSmart – which launched in 2010.

Prav Mathema is the National Medical Manager of the Welsh Rugby Union, leading on medical matters within the Union. He has previously held positions as Head of Medical Services at Queens Park Rangers FC and London Wasps Rugby Club. He is also a Senior Physiotherapist within the WRU National Men’s Squad.  He joined the WRU in 2011.

Other posts include being a Physiotherapist to the British and Irish Lions team, touring with them in 2009, 2013 and 2017. Mathema also acts as the Centre Director for the WRU Immediate Care In Rugby course.

Originally from Northern Ireland. Dr Michael Dunlop completed his formal medical training in Scotland including General Practice. Sport Medicine qualifications and experience gained within the NHS (Nottingham & Leicester), Northampton Saints RFC & the RFU. He is a member of the Faculty of Sports Medicine UK since 2016, and began working with Edinburgh Rugby & Scottish Rugby in 2019 as well as being a GP. He served as Vice-Chair on the PRO14 Medical Committee, prior to currently chairing the group and, from 2020, acting as Medical Advisor to the PRO14.