Ireland attack coach Mike Catt says the consistent form of Jonathan Sexton, Ross Byrne and Billy Burns at provincial level is part of the reason they are the current out-halves of choice in the national squad.

Speaking at the press conference in the IRFU High Performance Centre, Catt commented: “I think it’s the form players, I suppose. They’ve all played well for their provinces and they all deserve a shot at it.

“Guys like Harry (Byrne) haven’t played a load of rugby. Again, he’s got to get some rugby under his belt before that happens. What we don’t want to do is keep chopping and changing all the time.

“The three guys that are currently in with us at the moment, Johnny, Billy and Ross, have performed well for their provinces. They deserve to be here.”

Joining this out-half triumvirate in the 36-man squad selected ahead of the Italy clash is Leinster winger James Lowe, who will pick up his fifth international cap and his third in this year’s Six Nations.

Catt has been pleased with many aspects of Lowe’s game so far, although he did urge caution as the New Zealand-born back – along with a number of others in the current set-up – come to terms with life at the elite level of rugby.

That’s learning. It’s not just James that is trying to go through that. You’ve got to understand there are three or four guys that are probably in that same position.

“Trying to learn your trade at international level is not the easiest thing. I think James’ kicking has been exceptional, the distance he gets on his kicks and he has been consistently very, very good at that.

“There’s obviously things that he can work on, but against Wales he got his hands on the ball a lot of the time. He caused chaos every time he did get the ball in his hands.

“He’s done well, but there are some areas where all the players, all of us, need to make sure we get better at to be consistently a team that is hard to beat or impossible to live with.”

As Ireland prepare for their twelfth Test under the stewardship of Farrell, Catt believes there is still a large amount of structure behind the side’s style of play.

However, he acknowledged the game of rugby is beginning to change more and more, and that Ireland will be ready to adapt when necessary.

“We’ve still got structure. Every team has structure and it’s then making the right decision on the back of the structure,” explained the former England international.

“I think where the game has definitely changed a little bit, the game is very much more of an unstructured attack. In terms of there’s lots of turnovers. There’s lots of ball-in-play now.

“I think we had 44 minutes of ball-in-play against Wales and we only had seven lineouts. You spend all your time doing all the lineouts you want, but you might only get four or five of them in a game. Or six of them in an attacking position.

“It’s really where you put your efforts into the players. The unstructured game, from kick return, from counter attacking, all that sort of stuff, is where we feel the game is definitely going.” 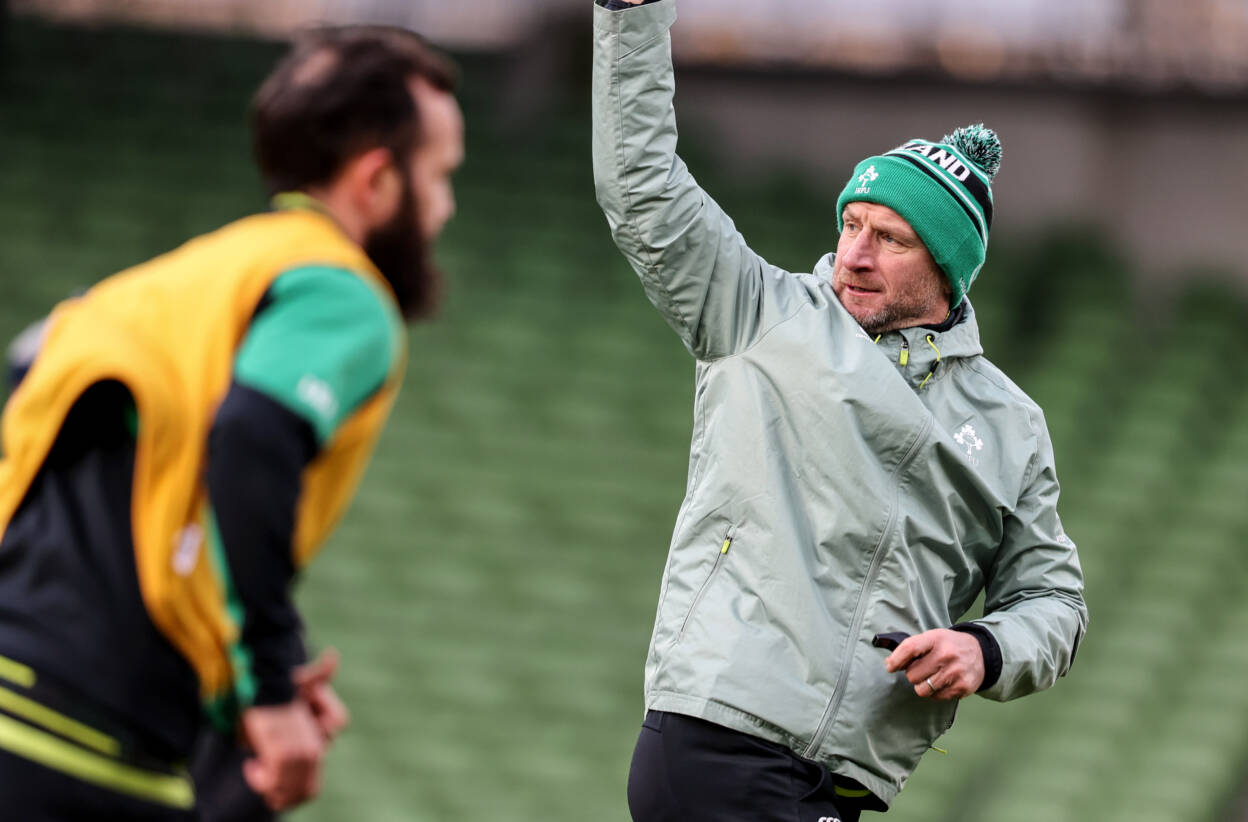 In order for the Irish attack to function in the way that he desires, Catt stresses that good communication skills will be key. This is something that he is actively working on with the current group.

“Communication is everything. In the past, everybody has been very reliant on your 9s and 10s controlling a game. Again, it’s another huge work-on for us.

“In terms of the quietness of some of the players, it’s something that we can be so much better at. It’s not just your nine and ten controlling it. It’s your centres seeing the space. It’s your wingers then using the ability to get the ball to them, to then see the space and your 15 is involved all the time.

Long before he was part of coaching teams that faced Ireland, Catt encountered the men in green as a player in both the Five Nations and Six Nations Championships.

His debut in the former was against Ireland at the old Lansdowne Road on January 21, 1995, and many of the traits he sees in the current squad were evident in that Irish side back then. He added:

The passion and the drive and what it meant to play for Ireland was unbelievable. My first Five Nations game was against Ireland at Lansdowne Road and the Claw (Peter Clohessy) got hold of me off an up and under, a garryowen.

“It was just how hard, how tough and how passionate they were to wear the jersey. I don’t think that’s ever changed. They had some amazing athletes, some incredible X-factor players. They’ve still got that passion, they’ve still got the drive.

“The game has just changed hugely. You need to have smart rugby and we need to make sure we can develop or build on what these guys have learnt throughout their schooling and provincial level to compete at the highest level.

“Everybody around the world has got better at these things. Defences are so much better, even from two, three years ago. For you to break it down, it’s not the easiest thing to do. Not many teams are doing it.”