Ireland head coach Andy Farrell had ‘mixed emotions’ in the wake of his side’s 15-13 Guinness Six Nations defeat to France at the Aviva Stadium.

Despite Leinster duo Ronan Kelleher and Ross Byrne contributing five points apiece from the bench, Farrell’s men suffered a narrow loss at the hands of the in-form les Bleus.

While acknowledging the endeavour of his charges, he was nonetheless frustrated to still be searching for a first win in this year’s Championship.

“Unbelievably proud of their efforts, there’s a lot of lads that are hurting in there, mentally and physically, by the obvious work-rate, work ethic, putting their bodies on the line for the country, etc.,” insisted Farrell, speaking at the post-match press conference.

“At the same time, Test matches are there to be won, especially at home. We rue a few decisions that we made and chances along that way.

“Even though a couple of days ago people were writing us off, we never wrote ourselves off. The game was there to be won and it was a hard-fought contest, but it’s one that slipped away from us in the end.”

Before replacement hooker Kelleher crossed for his first international try – following some quick thinking off his own lineout throw – Ireland had fallen 15-3 behind as a result of Damian Penaud’s equally well-finished 54th-minute score. 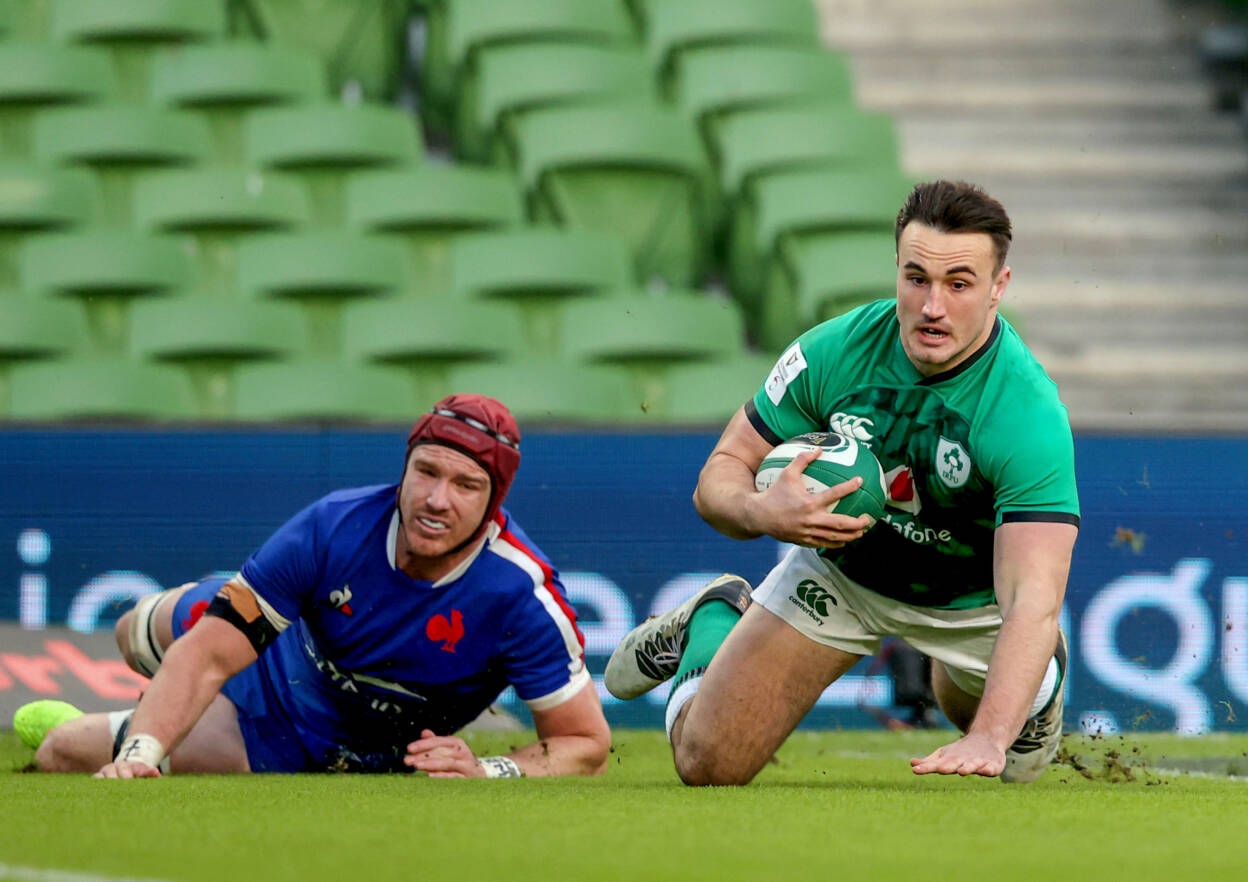 In recent games, Ireland have struggled to build a third-quarter platform and Farrell believes their game management let them down to a certain extent, after half-time.

“I thought our set piece was really good, obviously, in the first half. There was one or two things in the second half, but what I also thought was pretty good in the first half, we kept the ball in front of the forwards.

“We’re coming up against a really good defensive unit in France that are obviously good at making two-man hits and very dangerous when the ball is on the floor, regarding their jackaling.

“I thought the back field was open from time to time and we kept sending our forwards into some brick walls. At the same time, we had opportunities within that middle-third to try and get the ball to the edge.

“Their wingers were obviously taking a chance, playing up and in and jamming, and got us once or twice. We fell into a bit of a trap on occasions, of throwing the ball two-man out and we obviously got caught as far as our game management is concerned.

“There’s things that we could have done a little bit better, which in the long run saves a little bit of energy for what happens for that last couple of minutes there at the end.”

On a day when so little separated the two teams on the scoreboard, Farrell pinpointed France’s efficiency in attack as a major factor behind their first victory at the Aviva Stadium since 2011. In addition to Penaud dotting down, captain Charles Ollivon also finished off a sweeping first-half move.

I think they had a couple of chances, didn’t they, and that was it. They took their chances and they were formidable when they got the chance to punch through us first phase and get us on the back foot over the gain-line.

“Second phase coming around the corner and getting their offloading game going. It happened on a few occasions, but those few were one too many, because they were clinical enough to go and score the try.

“We had one glaring opportunity that, if we carried the ball another five metres and square up we probably get that five-pointer there. I think it would have been drawing going in at half-time. It’s fine margins.

“You seldom get opportunities in big games like this. Especially against a side of the quality of France, but you have to take your chances while you can obviously. That’s what they did.”

Aside from Kelleher and Byrne, Ireland also got considerable energy off the replacements bench from the likes of Will Connors and Ultan Dillane. A number of these players – and the unused Craig Casey – could well come into contention for Saturday week’s third round clash with Italy in Rome.

Yet, even though Ireland’s Championship prospects took a massive hit today, Farrell admitted his approach to the final three games of the tournament is unlikely to be altered, adding:

I thought their energy (off the bench) was great. I was happy with the lads in the first half as well. I thought they played some great stuff.

“Obviously the talking point would have been about the half-backs. That was the discussion certainly towards the end of the week and I thought Billy (Burns) and Jamison (Gibson-Park) did excellently.

“Jamison for 80 minutes, I thought he was outstanding. All the lads that came off the bench were always going to add to the performance. Our approach and our attitude doesn’t change.

“We’ll see how close we are now, because we’ll show our true character, won’t we? We’re not even halfway through, but it’s about making sure that for these next three games we’re at our best. Again, that approach doesn’t change. No matter what.”