After Ireland rounded off their Autumn Nations Cup campaign with a 31-16 win over Scotland, captain Jonathan Sexton was adamant they can get up to the level that England and France are currently at.

Finishing third in the inaugural autumn tournament, Ireland also claimed the same spot in the Six Nations behind the two teams who meet at Twickenham tomorrow in the Nations Cup decider.

With both England and France visiting Dublin in the 2021 Guinness Six Nations, Sexton is confident that Ireland will be able to prove more than a match for both sides. 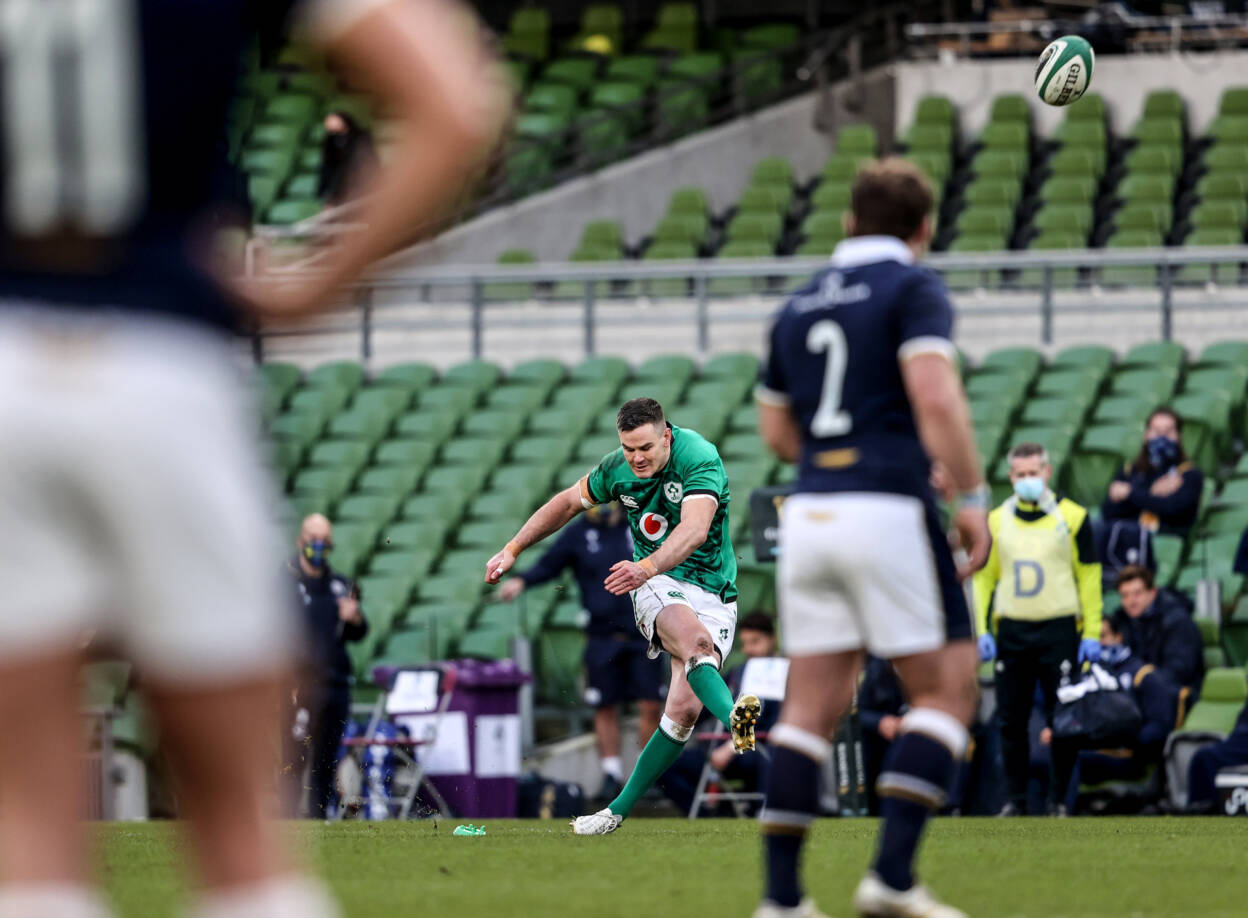 Speaking in the aftermath of the three-try play-off victory over the Scots, he said: “We had a good week, a short week. It was probably a good thing it was a short week.

“We were disappointed with our second half showing last week (against Georgia), but it was a good point for us to finish on. Because it really focused us in for this week.

Us as a team, we’re not at the top table yet in terms of we haven’t been able to beat France or England away from home, and that’s what the top teams are able to do.

“We’re just below that at the moment, but I’m confident in this team and coaching staff, that we can go up to that level and we can get there.

“Hopefully in February we’ll be able to get there and we’ve got some tough fixtures to start the Six Nations. Today was a good end to the year.

“We need to just keep evolving, keep improving and I think we have. I know you guys maybe aren’t aligned, but I thought we saw some of the things that we’ve been speaking about today and I thought we showed some really good stuff.”

While six wins from nine games is a decent return for this year, it pales in comparison to the achievements of 2018.

In addition to securing a Grand Slam two seasons back, Ireland also triumphed at the end of a summer tour to Australia before defeating New Zealand during an unblemished Guinness Series in the autumn.

While they lost their first game of the series against the Wallabies, it was their only defeat in 12 matches throughout that calendar year.

It might seem unfair to compare the current group to the class of two years ago – given how many new caps have been introduced in 2020 – Sexton insists that needs to be the level they aspire to. 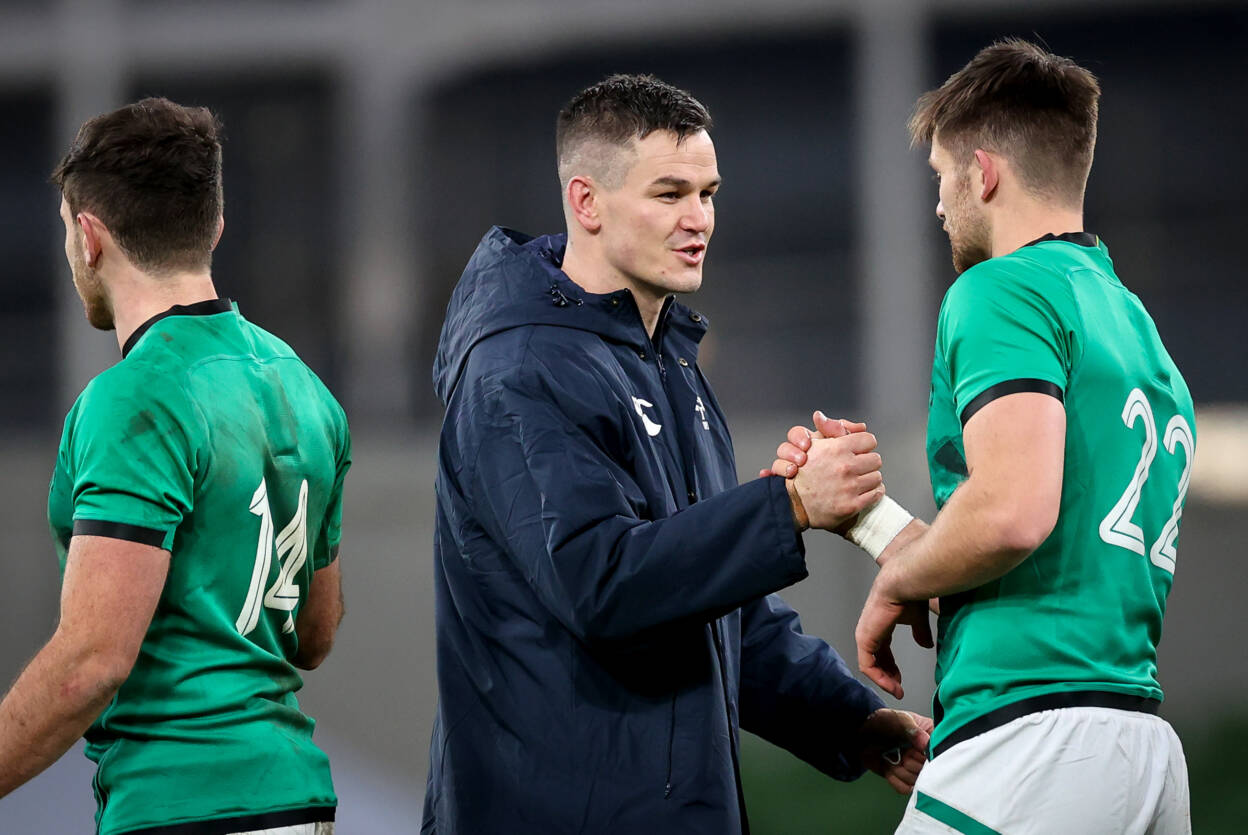 “We’re judging ourselves by the highest of standards. We wish we’d beat England and wish we beat France away. We learnt some valuable lessons, some harsh lessons in those big games away from home.

“We wish we were in there with a Six Nations trophy under our belt and we felt that was there for the taking. We’ll live with that forever.

“There’s no one that hurts more than us when we don’t perform on the big days. It’s about what you take away from it and there’s some young guys that played that day that will take a huge amount from it.

“We’re happy with the way we’re improving. I admit that we haven’t shown it in a full 80-minute performance.

“We probably didn’t show it in a full 80-minute performance today, but it’s Test match rugby. It’s not as easy as you just turn up and have it all your own way for 80 minutes.

“It’s hard. It’s different to any other type of rugby out there. I’m including Champions Cup in that. It is what it is.

One player to emerge onto the international scene since last year’s Rugby World Cup is Sexton’s Leinster team-mate Caelan Doris. Still only 22, he has played seven times in green this year and is close to establishing himself as an automatic starter under Andy Farrell.

As impressed as he has been by Doris so far in the Test arena, Sexton feels the best is yet to come from the versatile back rower.

“Incredible year, to come in and do what he’s done,” insisted the Ireland skipper. “Obviously his first appearance against Scotland didn’t go to plan, after he got knocked out after two, three minutes.

Caelan’s just been brilliant. Some of the carries he puts in for a man of his size. He’s not a massive man and he just comes out the other side of tackles.

“He’s got an offload game, he’s got a nice short passing game. Off the base of a scrum he’s very calm and collected. He can make some really good decisions – when to go, when to pass.

“I’m not going to say he’s a complete player, because he can definitely keep getting better. He’s had some big performances for us, but there’s definitely another level in him.