Ireland head coach Andy Farrell said he was pleased with the way his side were able to problem solve on the field during their 31-16 Guinness Series win over Scotland.

Trailing 9-3 on the half hour mark at the Aviva Stadium, the hosts found a consistent attacking rhythm in the latter stages of the first half.

Eight points without reply – a Jonathan Sexton penalty and Keith Earls’ 31st international try – ensured Ireland were in the driving seat at half-time and stayed there for the remainder of the contest.

Speaking to the media after the game, Farrell said: “That’s a big part of the game nowadays. The game is so pressured in many different areas, how you adapt to things not going perfectly well is a big part of the modern day game.

Set piece is so pressured across the board. Defences are so vigorous now and competition at the breakdown is so tough that there are plenty of periods within all games that don’t go your way. How you deal with those situations is crucial and it’s a big part of the game.”

For the second time during the Autumn Nations Cup campaign, Caelan Doris was named the Guinness player-of-the-match after a stellar performance in the Ireland back row.

In addition to his four passes and 13 carries, the Mayo youngster also executed six tackles over the course of an all-action display.

Farrell has been impressed with Doris’ development throughout his first year as a senior international – he now has seven caps – and in the last few weeks, in particular.

He’s some man for taking on a one-on-one and carrying people five metres over the gain-line. His leg drive, his ability to not accept a close contact and just go down is pretty special.

“He’s learnt a lot through this period. It’s a priceless amount of time for Caelan to be in camp, in an international set-up for eight weeks. As it is for many others within our group.

“The learnings that those lads would take from this period is fantastic for us going forward. They’ve learnt a lot about themselves, about what it takes to be an international.

“What it takes to perform and be themselves performance-wise, in a really pressured environment, is one they’ll reflect on massively and come back bigger and stronger in the Six Nations with.” 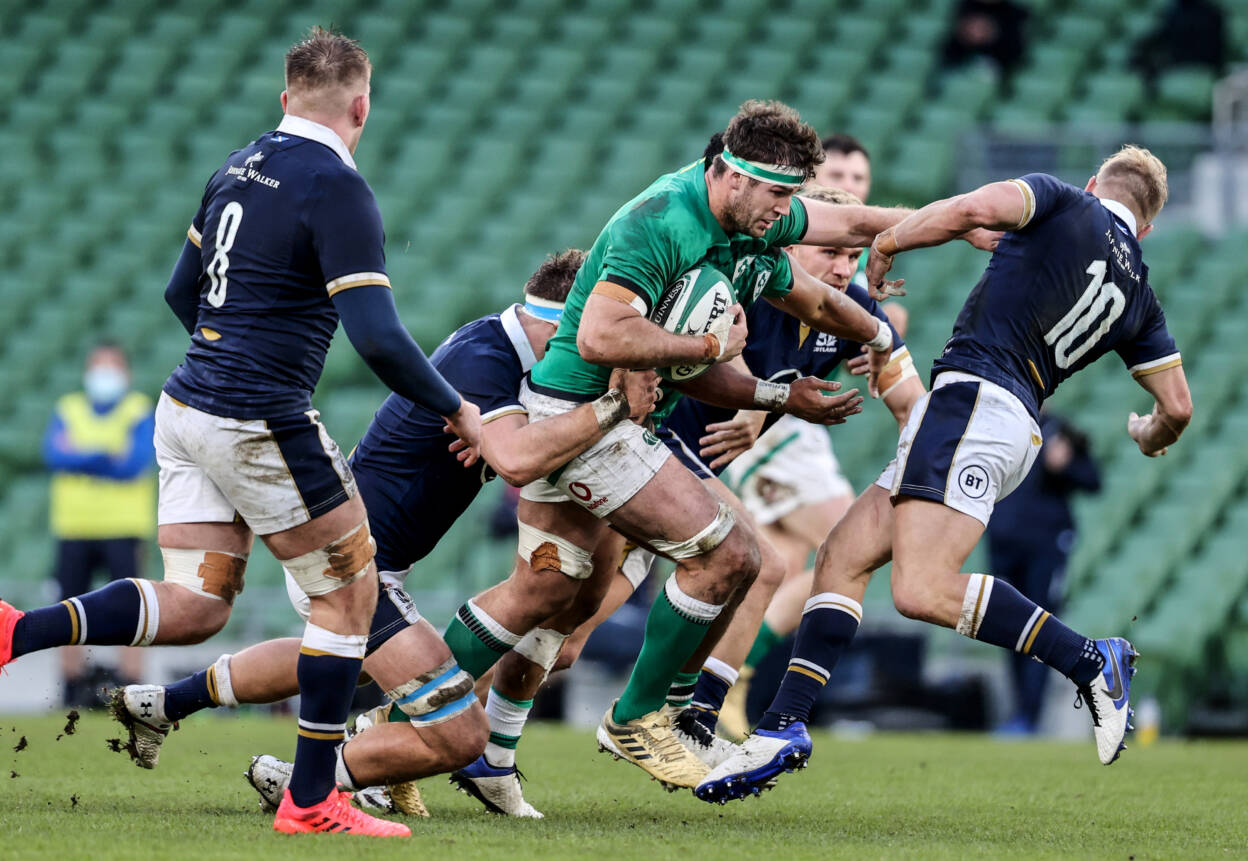 Reflecting on his first year at the helm, which featured two intense periods of Test matches either side of an eight-month impasse brought about by the Coronavirus pandemic, Farrell admitted his squad remains a ‘work in progress’.

Nonetheless, he believes strides have been made during an up-and-down 2020, adding: “It’s well documented about the number of players that we’ve used and a few injuries along the way that’s influenced that.

“At the same time, I think we’ve grown the group. We’ve got a pretty diverse group during this time, as far as maturity and age-wise, and regarding international rugby.

“I feel that gap has really closed and we’ve made some massive learnings from that. I think that will stand us in massive stead going forward. An eight-week period, it’s a big old time to keep spirits on the up the whole time.

“Honestly it feels like it has been four weeks. The attitude, the togetherness of the players, they want to get better.

“The want to learn has been amazing. That will be the biggest thing for me, coming out of this period, which stands us massively in good stead.”