Despite acknowledging it was an up-and-down performance from his side, Ireland Women’s head coach Adam Griggs was really pleased to make a winning return to Six Nations action at Energia Park last night.

Having fallen behind to Melissa Bettoni’s converted try on 15 minutes, the girls in green gradually reined in the challenge of close rivals Italy in this much-delayed fourth round encounter.

Influential prop Lindsay Peat and player-of-the-match Claire Molloy both touched down in a barnstorming finish to the first half, before a 70th-minute penalty try ultimately put the seal on a 21-7 victory.

Speaking afterwards, Griggs said: “I think it really showed that we just have that rustiness, in that we weren’t quite prepared in the way Italy put the pressure on us. They really came out of the blocks quite quickly in that first 20 minutes.

The messages from us were very much that we need to focus internally and worry about what we’ve been training for the last six weeks. Once that message came on, the players really got into a better groove of things.

“We started to string some phases together and again put Italy on the back foot. That first 20 minutes was scrappy, but I think as a coaching staff we were probably prepared for that with being out for so long. We’re still very much working on our game management.

“One of those aspects was just there at the end, where we were 21-7 up. We could have chased that extra try. We felt we had some parity in that open play, unstructured. It’s something we’ll learn from, but at the same time we asked for three wins in the Six Nations and we’ve got those. Albeit with a break in between, but overall we’re pretty satisfied.”

In the build-up, Griggs had spoken about how frustrating it had been for the Ireland Women to be out of action for long. This frustration was compounded further on Thursday when Eimear Considine and Laura Feely were withdrawn from the matchday squad arising from an inconclusive Covid-19 test on an Irish player.

Yet, Griggs accepts this is the new reality the Union as a whole needs to adapt to and was thrilled with the way Laura Sheehan stepped into the breach as an indirect replacement for Considine, her UL Bohemians and Munster team-mate.

“I guess that’s just the times we’re living in. We had our contingencies if things were to go wrong and again that’s the beauty of having the wider squad that’s so competitive at the moment,” he explained.

“You look at Laura Sheehan, I thought she was fantastic tonight. Her defence was outstanding. She made some really good reads. She got on the ball and was dynamic in her carries.

“I’m delighted for her, because she’s been working away really hard and pushing the other players. To get her shot and take it in the way she did, that’s testament to the group. As I say, those players, we’ve just got to look after them now and make sure that they’re fit and healthy.”

In an age when emerging talents are making the giant leap onto the international stage, the aforementioned duo of Peat and Molloy showed there is still plenty of room for experience and know-how within this Irish set-up.

Just a couple of weeks shy of her 40th birthday, Peat became the oldest try scorer in Women’s Six Nations history – eclipsing Wales’ Claire Flowers from the 2012 tournament – before providing the assist for Molloy’s effort on the stroke of half-time.

Molloy, who works as an accident and emergency doctor in Cardiff, was making her first appearance in green since March 2019. She was selected as the player-of-the-match following another stellar display at openside flanker.

“What you see with those two players mentioned is that experience. They’ve been through that, they know that the first 20 minutes may not have gone as we wanted but they have that experience to know that we have time to change a game,” Griggs remarked of the pair.

“It’s just about getting those little details right and really again focusing on your core roles. Claire Molloy did that around the breakdown for us in defence and then she gets on the end of some really good team play to score us a try before half-time.” 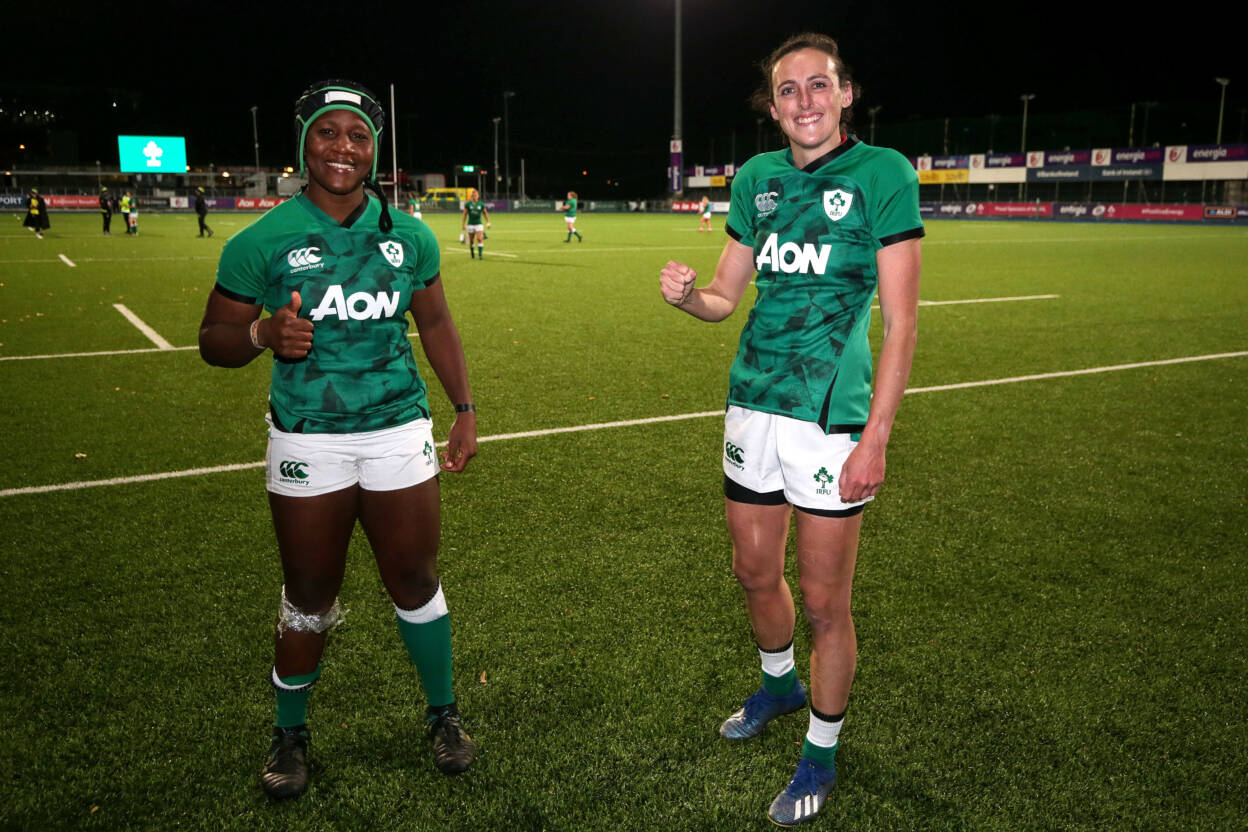 Last night’s game was also a big one for Hannah Tyrrell, whose sole appearance at the 15s grade since the conclusion of the 2018 Six Nations was a final quarter cameo against England back in February.

Now fully concentrated on 15s rugby after a long stint in the IRFU Women’s Sevens Programme, Griggs felt Tyrrell settled into her new position of out-half with considerable poise.

I thought Hannah grew into the game. For her first start at 10 at this level, she really did well. The more she got on the ball, the more comfortable she looked. We know she’s got that left foot. I think if we look at the game, there were probably even more opportunities for her to use that.

“Again, I talk about game management. She’ll get better and she’ll learn from that, because the way she started to dictate play with some of those kicks and even her running game, being a threat to the line, she could really be quite a threat for us going forward. I thought she was really good.”

When the fixture list was initially drawn up for the 2020 Championship, it was anticipated that this would be the final home match for Ireland. However, that has all changed in the last few days with France agreeing to come to Dublin for next weekend’s final round clash.

Had the game gone ahead in Lille as planned, Ireland’s amateur stars would have been forced to undergo a mandatory 14-day period of self-isolation. Since this is not required of the French players, they have made the decision – with the full backing of their Federation – to forfeit home advantage.

This will allow both sides to finish out their campaign in as smooth a fashion as possible and Griggs is grateful for the gesture les Bleues have made.

It’s a great move and we’re delighted France are willing to do it for us. To keep this competition alive. Fair play to the IRFU and the Six Nations for making it happen for us.

“We’re thrilled to have another game and I guess that shows the rugby family and rugby spirit is alive and well in times like this. We can only thank them really.

“What they’ve done is to keep this alive for us to have another game and it also gives them as a squad a game as well. We’re just lucky that they obviously are able to do it and they’re willing to do it. We can’t wait to get involved next week.”