Promising young scrum half Conor McKee throws a pass during the third round match between Queen's University and Ballynahinch at Ballymacarn Park ©John Dickson/www.DicksonDigital.com

Ulster Conference 1 leaders City of Armagh battled back from 10 points down to earn a share of the spoils with Banbridge. Elsewhere, Dungannon and Bangor both claimed their second wins in Conference 2.

City of Armagh played their ‘get out of jail free’ card as, despite a frustrating all-round performance, a late 10-point push saw them claim a 24-all draw with neighbours Banbridge.

“However, hats off to our lads, despite not being at our best, we stayed in the game and got a share of the points which looked unlikely with ten to go. We’ll go away and review the performance and look to improve in some obvious areas of the game that let us down today.” 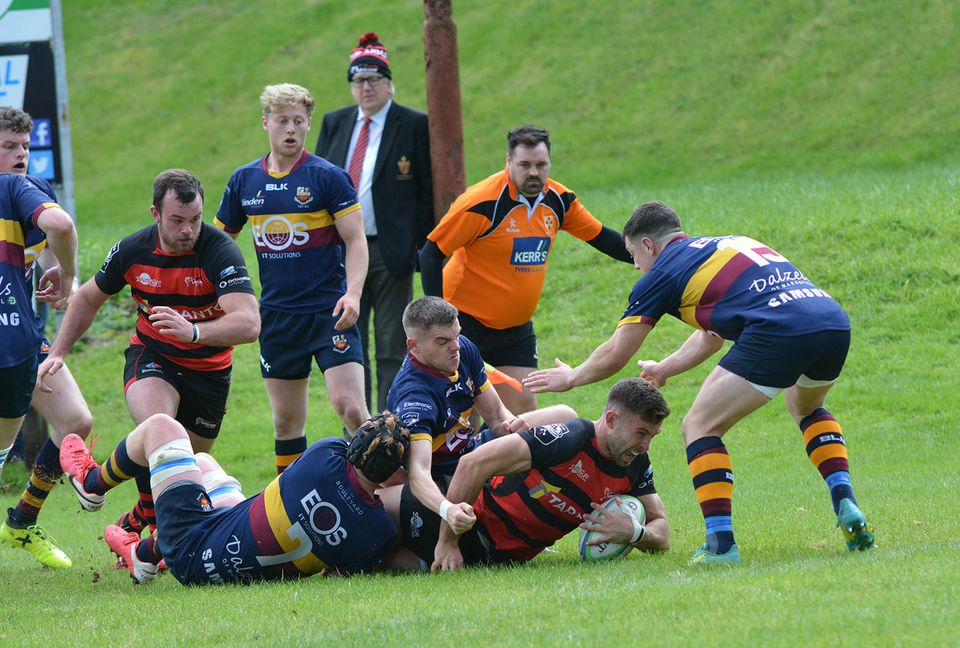 It had all begun brightly for the table toppers, who led 7-0 inside six minutes. Cormac Fox hung up a pinpoint cross-field kick for winger Matthew Hooks to touch down, with the talented out-half also converting from the touchline.

Banbridge showed how dangerous they can be, in response. Armagh paid the price for a turnover and a missed tackle when Bann’s midfield ace Andrew Morrison swept through to score in the corner.

Adam Doherty matched Fox’s excellence with a fine conversion, and he also added the extras to Robin Sinton’s surging 70-metre run-in as the visitors made the most of an overlap to lead 14-7.

Banbridge drew confidence from some determined defence, keeping out an Armagh maul and winning a clearing scrum penalty. The left-footed Doherty then pushed them 10 points clear with a 35th minute penalty.

Back came Parker’s men, crucially profiting from a yellow card when Evin Crummie’s half-break created enough space for Hooks to stretch over and complete his brace. Fox’s conversion made it 17-14 for half-time. 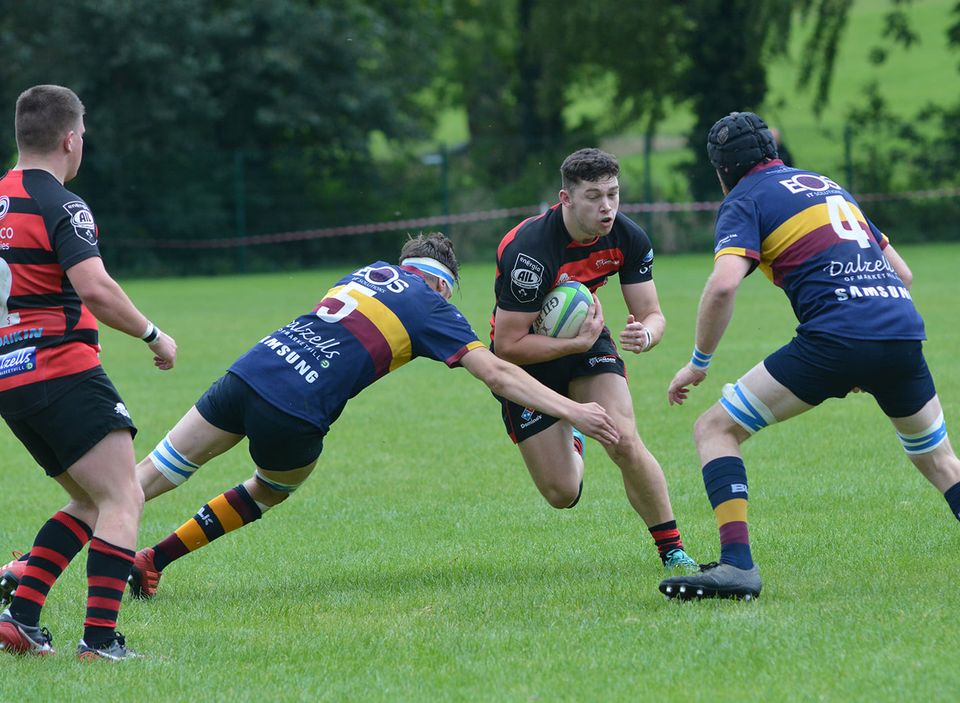 Defences were on top during a tight third quarter, with both sides making errors in scoring positions. Bann made the breakthrough in the 66th minute, young centre Jude Postlethwaite winning the race to his own chip kick and Doherty converted again.

Armagh had it all to do at 24-14 down, but their hopes of gaining at least a losing bonus point improved when Postlethwaite saw yellow and Fox split the posts with the penalty.

Right at the death, Armagh pounced for the levelling try. With possession back from a knock-on, they attacked through Neil Faloon and then Fox’s pass back inside sent replacement winger Kyle Faloon racing through a tired Bann defence from 50 metres out. Fox’s conversion tied it up. 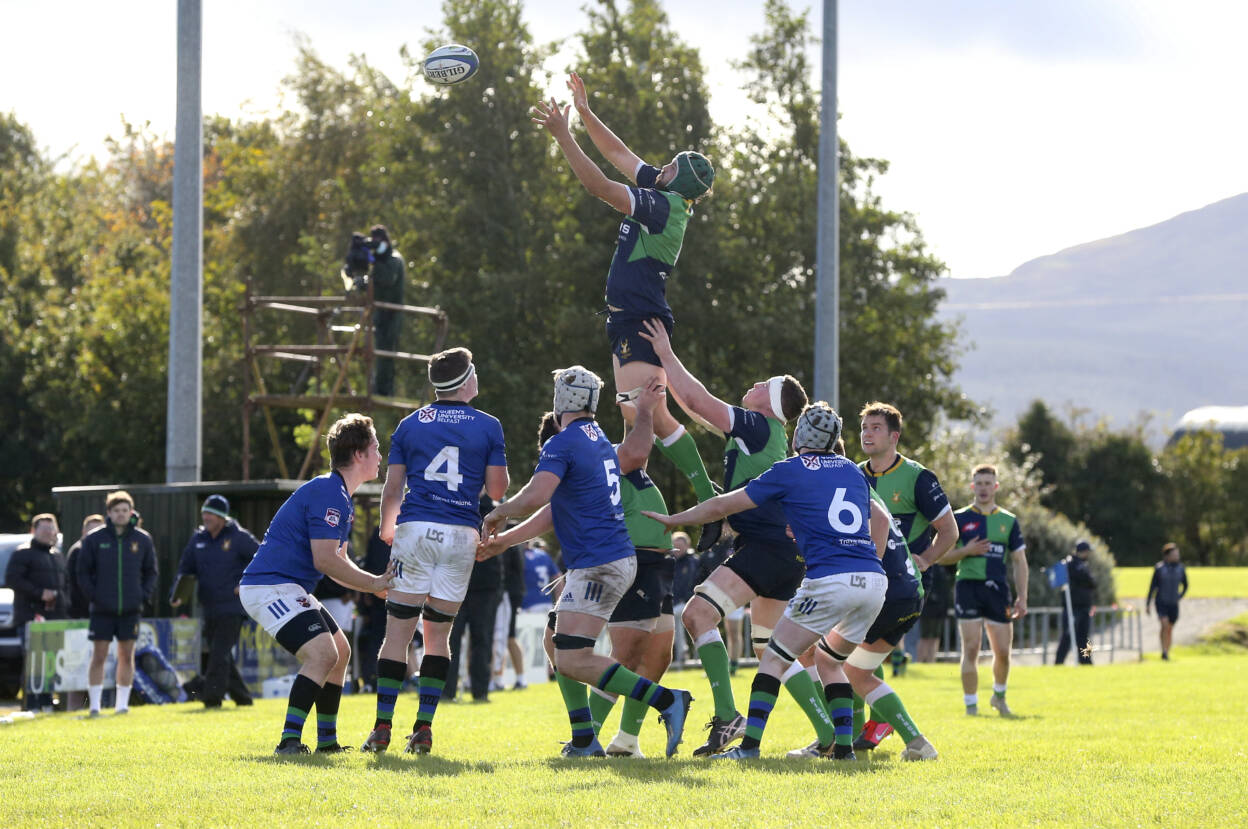 Now lying just a point behind Armagh in the standings, Queen’s University pulled off a terrific 20-17 victory over Ballynahinch at Ballymacarn Park. Out-half Ritchie McMaster’s late penalty decided it.

McMaster was a central figure throughout, finishing with 10 points. Scores were hard to come by, with prop Griffin Phillipson’s well-finished try from 15 metres out giving the Belfast students a 5-0 interval advantage.

A Greg Hutley penalty was cancelled out by a second Queen’s five-pointer – Ryan O’Neill grounded it – and as the intensity lifted further, a Ronan Patterson try brought ‘Hinch level at 10-all.

McMaster’s well-taken intercept try was followed by a converted Zac Ward effort, but it was the former who emerged as the match winner for Queen’s thanks to his last-gasp penalty from over 40 metres out. 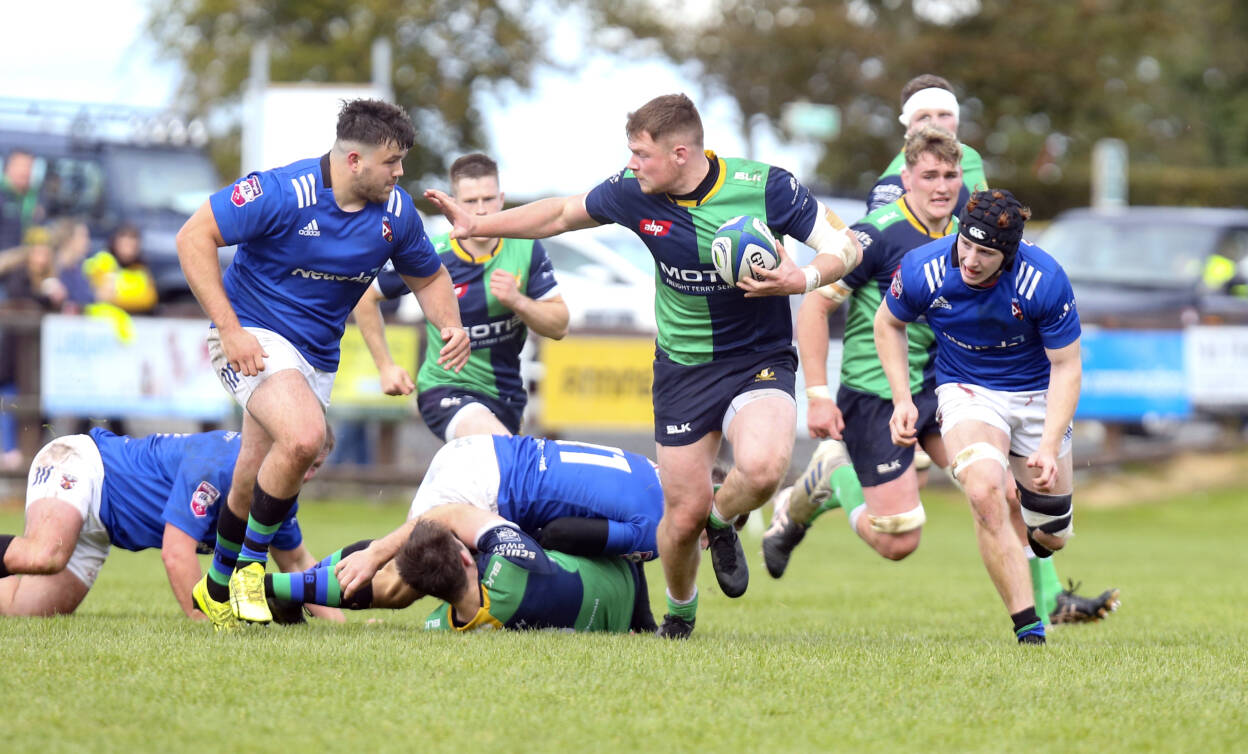 South African Brad Roberts, the Division 2A Player of the Year last season, and Ian Bratton weighed in with late tries to complete a 17-10 comeback win for Rainey Old Boys against Malone at Hatrick Park.

In Ulster Conference 2, one of the best encounters across the four provinces saw six-try Bangor defeat Ballymena 41-34. Out-half Tim Small starred for the Braidmen with 24 points ( a try, five penalties and two conversions).

A late penalty from Mark Best sealed it for Bangor, topping off his own 11-point haul. Electric openside Andrew Smyth got the man-of-the-match plaudits with a hat-trick of tries, and David Bradford, Mike Weir and scrum half Ali Lockhart also touched down.

With Belfast Harlequins’ trip to Magherafelt cancelled, Dungannon are the new leaders after Michael Lawton’s late penalty saw them edge out Omagh 13-10 at the Thomas Mellon Playing Fields.

Alex Gormley’s unconverted try, as ‘Gannon built well off a scrum platform, was the first half’s only score. A bout of pressure from their forwards yielded an Omagh try from prop Mark Smyth, early after the restart.

The visitors reopened their five-point lead thanks to a Lewis McCrabbe effort via a free-flowing attack. Centre Lawton’s conversion attempt came back off the post at 10-5.

Omagh pressed again in impressive fashion, the ball just evading them over the end-line during a speedy breakout. But young lock Robbie Sproule got over towards the end of the third quarter, rewarding several phases of sharp handling.

The Accies fell short in the closing stages, though, as a yellow card for slapping the ball down left them with 14 men. Lawton delivered the killer blow from 35 metres out.

Meanwhile, following the correct application relating to Covid-19 guidelines, the City of Derry v Belfast Harlequins third round fixture was cancelled. The score is recorded as 0-0 and both teams are awarded two points.