Ballincollig and Old Belvedere opened their win accounts in the Energia Women’s Community Series this weekend. A quartet of bonus point victories was completed by Blackrock College and fellow table-toppers UL Bohemians.

Support your club online and be in with a chance to win some great prizes. Check out www.irishrugby.ie/yourclubyourcountry for details of the IRFU Grand Draw.

Alannah O’Carroll and Ciara O’Dwyer both quickly made their mark in Old Belvedere colours with two tries each in Saturday‘s 48-3 bonus point win over Wicklow.

In Johnny Garth’s first competitive game in charge, the debut duo picked off some well-taken scores at Ollie Campbell Park and there was also a try double for Ireland Sevens international Deirbhile Nic a Bhaird.

Nic a Bhaird was a real workhorse around the pitch, wearing the number 7 shirt but throwing in at the lineout and carrying off the base of a dominant Belvedere scrum.

Despite it finishing eight tries-to-none, Wicklow’s young side went toe-to-toe with their experienced hosts for much of the first half. They were disciplined and committed in open play and drew praise afterwards from Garth.

“Wicklow stuck in well,” insisted the new ‘Belvo head coach. “Obviously they’re new to this level of rugby and new to thr All-Ireland League this season. We expected them to be enthusiastic and they were very well organised as well.

“We probably didn’t play brilliantly ourselves and a bit of white-line fever cost us a couple of scores, but it’s the first game of the season for us and we’re all delighted to be playing rugby. We’ll certainly take the win, that’s for sure.”

Tammy Breen took down Brittany Hogan, another of Belvedere’s new signings, to deny the Ireland Sevens ace a certain 11th-minute try, summing up Wicklow’s resilient defence. A ring-rusty Belvedere scrummaged superbly but a spate of handling errors thwarted their attempts to open the scoring.

The deadlock was broken in the 18th minute, a central scrum in the Wicklow 22 won against the head and a neat exchange between Jemma Jackson and Grace Miller paved the way for new ‘Belvo winger O’Carroll to go over near the right corner.

Prop Becky Condren clipped over a well-struck penalty for Wicklow’s opening points in the Community Series. However, 5-3 became 12-3 after Nic a Bhaird crashed over from a 28th-minute ruck, five metres out from the Wicklow whitewash. Out-half Jackson converted.

Belvedere went into the break with a 14-point buffer, a lovely backs move late on seeing Miller, Hogan and lively full-back Fiona Tuite combining to send Carroll over again from close range.

Nic a Bhaird slotted in at number 8 in a five-metre scrum and was quick off the mark to bag the bonus point score, four minutes into the second half. Wicklow scrum half Meagan Parkinson put her full weight behind a cover tackle to prevent Alice O’Dowd from reaching over for ‘Belvo’s fifth try.

That score did arrive a few metres later, replacement O’Dywer burrowing over for Jackson to once again convert at 31-3.

Signed from Tullow as a dual status player, O’Dwyer finished off a free-flowing attack for try number six, the centres again providing the zip and Nic a Bhaird and Elaine Anthony laying off for O’Dwyer to score.

Jackson landed his fourth successful conversion before O’Dwyer was inches away from grabbing a hat-trick. O’Dowd, who sparked another potent attack with a rip in the tackle, successfully barged over, and another member of the bench, Katie Layde, used a big hand-off to wrap up the try-scoring in the 71st minute.

With Wicklow’s line speed much improved from the previous week, there were notable performances from stand-in out-half Erin McConnell, Condren and winger Emma Curran. Head coach Jason Moreton readily acknowledges they have a lot to work on before hosting Suttonians in two weeks’ time.

“We were a little messy, often after a lot of good work defensively,” said the New Zealander. “We straight away made a mistake by either an inaccurate pass or dropped ball, leading to turnovers. At this level a ball turned over often leads to a score.” 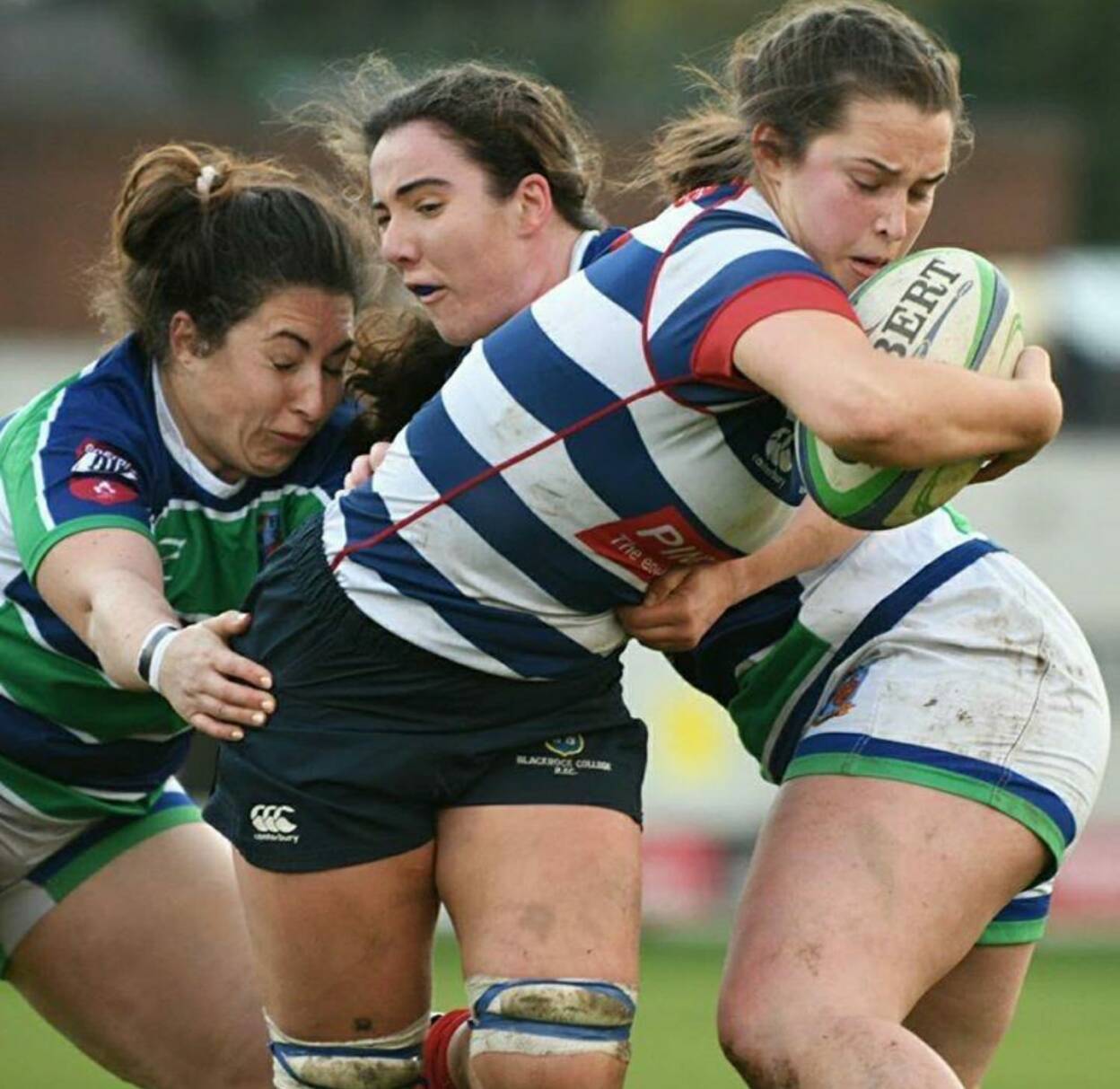 At Stradbrook on Saturday evening, Blackrock College made it two wins out of two to go five points clear at the top of the Leinster Conference. Another all-action display from two-try captain Maeve Og O’Leary inspired ‘Rock’s 43-0 bonus point victory over Suttonians.

Sutts turned in a valiant performance, having been rocked by the early injury-enforced departure of skipper Lauren Farrell McCabe. Strong-running centre Shannon Touhey, who was released from Ireland camp for the game, encouraged her team-mates with some powerful midfield carries.

Amid some early drizzle, Blackrock immediately pressed for an opening try and flanker O’Leary flew down the left wing, slipping past four defenders, to quickly get the home side on the board.

‘Rock’s new scrum half Aoibheann Reilly has a terrific eye for a gap and she made it 10-0 midway through the first half. The Ballinasloe native threw a dummy and accelerated clean through before sidestepping around the full-back to dot down in the left corner.

Despite Sutts’ best efforts, Maeve O’Callaghan soon offloaded for winger Megan Burns to touch down, with the Tullamore youngster making the initial incision in the visitors’ defence. Influential out-half Lisa Mullen tagged on the extras.

Mullen did likewise after ‘Rock’s bonus point was secured in the 36th minute by Tess Meade, who thundered over from a Reilly pass to leave it 24-0 at half-time. Tighthead Caoimhe Molloy did the donkey work with an initial surging carry.

Aoife Browne’s well-timed pass put O’Leary over for the second half’s opening try, converted by the left-footed Mullen. The final half-an-hour contained two more ‘Rock tries, Burns ghosting through a gap for her third touchdown of the competition – converted by Meabh Deely – and numbers on the left released Natasja Behan for a 74th-minute closer.

Blackrock head coach Ben Martin commented afterwards: “We gave debuts given to Kate Cullen at full-back, Anna Doyle on the wing and Leah Reilly who partnered up well with Ciara Scanlan in the centre.

“There was some excellent defensive work-rate from all players, particularly Caoimhe Molloy in the front row. Christy Haney’s break from the five-metre line to halfway set us on our way for another score.

“We welcomed back lineout specialist Mairead Holohan in the second row. She also used her speed in a 20-yard gain and met an excellent double tackle which prevented her going all the way.”

Today‘s two clashes in Munster’s top Conference resulted in bonus point wins for UL Bohemians and Ballincollig. Louise Galvin may have retired recently as a Sevens international, but she is going the right way about earning a recall to the Ireland 15s set-up.

Lining out against her native Kerry in Listowel, Galvin grabbed an early brace of tries in UL Bohs’ 31-0 defeat of the Kingdom. The hosts’ strong start saw them put Bohs on the back foot and force some mistakes from the All-Ireland League heavyweights.

However, once Fiona Hayes’ charges began to settle, Galvin’s relentless pursuit of midfield gaps was rewarded with tries after 14 and 19 minutes. Captain Edel Murphy, another Kerry woman playing for UL, landed both conversions.

Number 8 Sarah Quin finished off the first half with a hard-earned try, leaving it 19-0. Bohs’ defence was thoroughly tested on the restart, as Kerry’s constant phase-building saw them camped on the five-metre line.

Murphy was yellow carded for hands in the ruck, but an eventual turnover led to Galvin breaking downfield. Kerry’s starlet scrum half Muirne Wall did manage to chase down the long-striding centre.

Nonetheless, UL were rewarded for their patience when working through some well-executed phases. Ciara O’Halloran crashed over and Rachel Allen converted in the absence of Murphy.

Kerry’s never-say-die attitude found them once more inside the UL 22, forcing a penalty which Laoise O’Driscoll was unfortunate to miss. From a quick restart, Galvin broke the line once more and connected with fellow Kerry woman Laura O’Mahony who ran clear for the fifth and final try.

Ballincollig bounced back from last Sunday‘s loss to Kerry to post a 36-3 victory over a young Shannon/LIT outfit. They led by seven points inside the opening two minutes at Coonagh, a fluid back-line move putting centre Christine O’Sullivan over at the posts. Jessica Kelleher converted.

The ‘Collig backs found a way through again on the quarter-hour mark as Heather Kennedy crossed in the corner. Shannon/LIT enjoyed better possession and territory approaching half-time, and the pressure resulted in a penalty goal from full-back Niamh Quilligan.

Leading 12-3 at the break, Ballincollig upped the tempo and strung together some great scores. The replacements made a good impact and the visitors’ backs continued to exploit space through the middle and out wide. O’Sullivan scored again and winger Kennedy added two more to complete her hat-trick.

Mona Fehily then went in under the posts and two second-half conversions from O’Sullivan topped off her own 14-point contribution. ‘Collig head coach Damien Hicks was happy with the result and the aim is to keep building and to hit the ground come the start of the All-Ireland League in January.

Meanwhile, following the correct application relating to Covid-19 guidelines, the two Ulster Conference second round fixtures were cancelled – Cavan v Queen’s University and City of Derry v Malone. The scores are recorded as 0-0 and both teams awarded two points.