The Energia Women’s Community Series explodes into life this weekend with a number of exciting local derbies from Belfast down to Skibbereen. Four newly-established teams, Kerry, Shannon/LIT, Ennis and Kilrush, make their debuts in Munster, while All-Ireland League newcomers Wicklow and Ballincollig prepare to face some of their top-tier rivals. 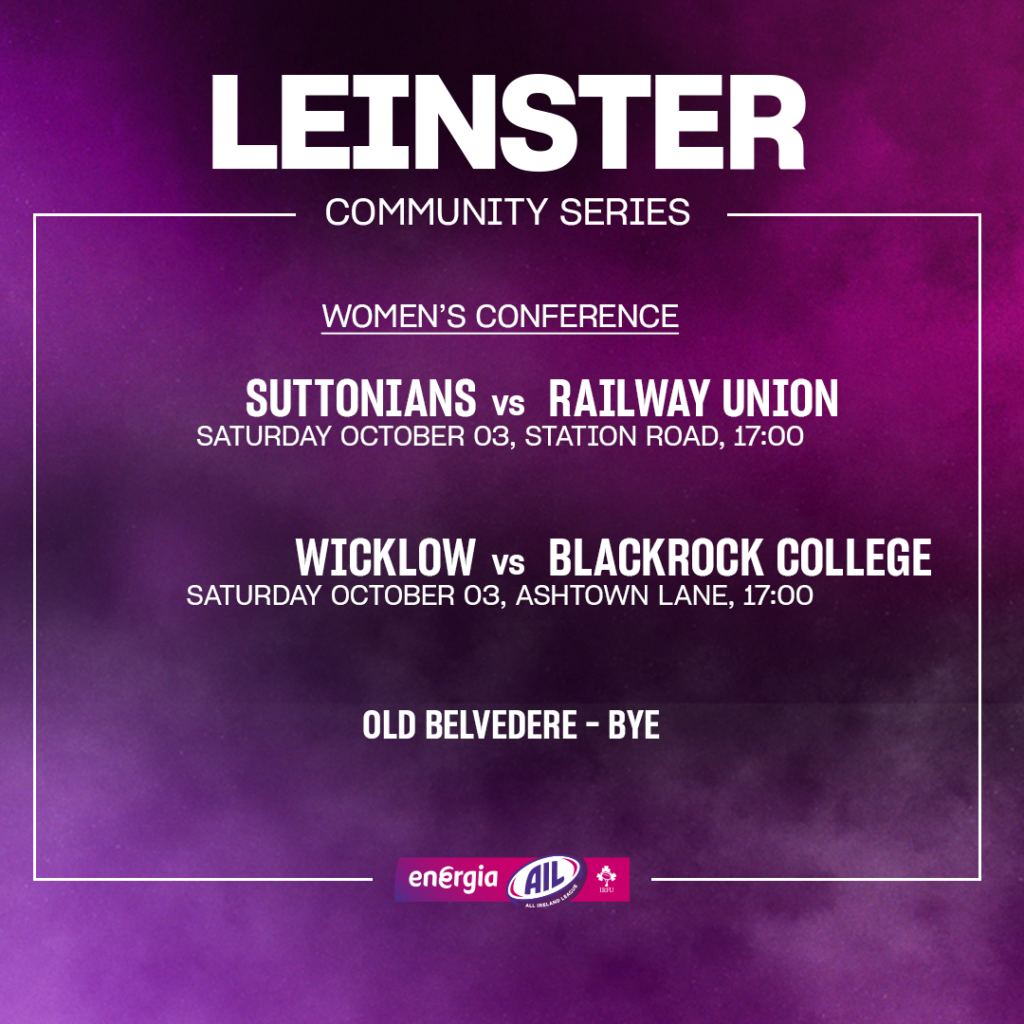 Positivity abounds at Station Road as Suttonians look to build on an encouraging mid-table finish in their debut All-Ireland League season. Leinster’s Lauren Farrell McCabe, equally at home at scrum half or full-back, is the new captain of a Tribe squad that includes her teenage sister Kate, who has come through the IRFU Sevens Development pathway.

The sister act continues with Jools Aungier, whose brother Jack plays for Connacht, recently returning to Sutts. This Leinster Conference opener will be a tough ask for Robert Forbes’ charges, especially with Railway Union’s selection boosted significantly by the availability of their Ireland Sevens internationals.

With the World Series postponed until next April, the likes of Amee-Leigh Murphy Crowe, Eve Higgins and Stacey Flood are all back in Railway colours. Another speedster, Orla Hayes, has joined Railway from Ashbourne and enjoyed a superb senior debut last week with three tries in their Metro Cup semi-final win over Wicklow.

Wicklow will get a taste of what All-Ireland League rugby is like when Blackrock come to town. New Zealander Jason Moreton leads a Wicklow coaching team that includes the canny addition of vastly-experienced strength & conditioning coach Marian Earls, the former IRFU Head of Fitness for National Sevens and Women’s Rugby.

Watch out for Ella Roberts and Kayleigh Sullivan who have been in try-scoring form in Wicklow’s early-season games. Captain Amy O’Neill commented:

We’re definitely a team that wants to make our mark this year, that’s our hashtag for the coming seasons. Give it two or three years and Wicklow will be the team people will want to go to and play for.”

There is a lot of talk about Blackrock’s potential given their strong player recruitment and Ben Martin’s appointment as head coach. Hannah O’Connor, last season’s Energia Women’s Player of the Year and top scorer, remains a lynchpin figure, while Meabh Deely, Mya Alcorn and Leah Reilly – all recent Ireland Under-18 Sevens players – should get their chance to shine across the Community Series.

The start of a much-anticipated new dawn in Munster Women’s rugby as Kerry, an amalgamated team made up of players from Abbeyfeale, Killarney, Listowel and Tralee, play host to Ballincollig who will ensure a Cork presence in this season’s All-Ireland League for the first time since 2018.

Coached by Kieran Reilly and captained by Blennerville’s Anna Murphy, Kerry are looking forward to ‘testing where we’re at in terms of our development’. “The talent is here and we’re putting in place the arrangements to make it sustainable,” Reilly told the Irish Examiner. “Our objective in two or three years or whenever the opportunity comes along is to go to the AIL.”

Ballincollig warmed up for the Community Series with an eight-try win over Skibbereen, including a hat-trick from former Ireland U-18 Women’s Sevens captain Jayne Pennefather. Damien Hicks is their new head coach with ex-Ireland international Geraldine Rea installed as team co-ordinator.

Having missed out on a potential All-Ireland League and Cup double last season, UL Bohemians are hugely determined to begin the new campaign on a strong footing. Fiona Hayes, ably assisted by Niamh Briggs, has been able to maintain an experienced Red Robins squad while working on the addition of a seconds team.

Shannon/LIT are the second amalgamated team in Munster’s top Conference. Their preparations for tonight’s opening Community Series clash included a session this week overseen by Munster Women’s Development Officers Ken Imbusch and Willie Shubart. A number of their talented U-18 contingent are stepping up to the senior grade.

It’s a brilliant merger, it gives us a lot of opportunities both with coaching, facilities, players. We’re playing a very tough UL team who are coming off the back of an unbeaten AIL season, but we’re looking forward to going out there, playing our game, hitting hard and showing what we’ve done in pre-season.”

Buoyed by their successful and ever-growing Girls rugby programme, Ennis have taken the plunge by setting up a Women’s team for the first time this season. Chisom Ugwueru (pictured below) has been a leading light for the Ennis girls, winning the Interprovincial title with Munster and playing international Sevens rugby for the Ireland U-18s. 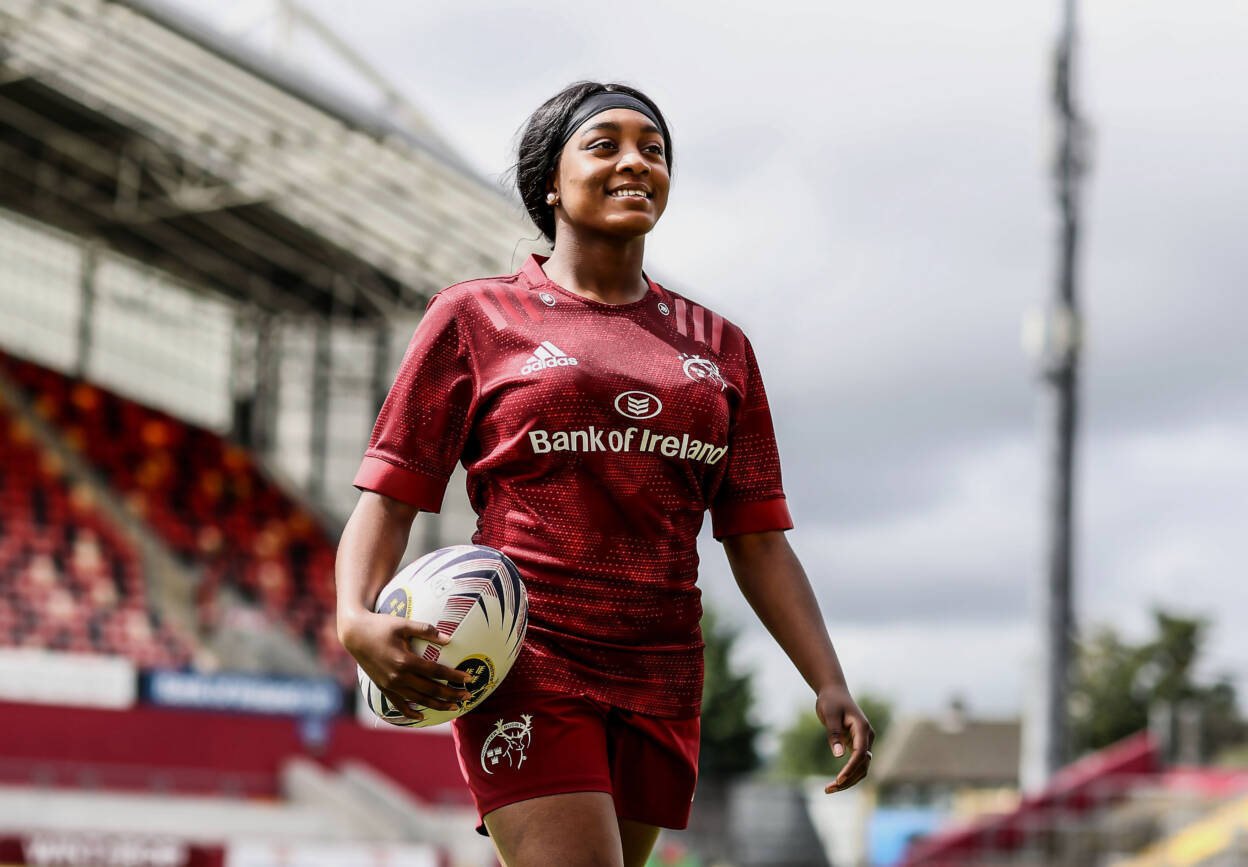 It is a crunch Clare derby first up for Ennis as Kilrush, from the west of the county, pay them a visit in round one. These clubs have developed a keen rivalry at underage level and Kilrush were represented on last year’s successful Munster U-18 Women’s side by backs Saskia Morrissey and Clodagh McMahon.

Andy Burke, Kilrush’s director of rugby, told Clare FM: “This is step one in our five-year development plan – to initiate and grow this new ladies junior team because, one, we believe they’ll be very competitive and, two, we have a fantastic resource of players coming through from our Under-18 group last year and also our Under-16s coming through that.”

Skibbereen are another team in their infancy having only played their first game back in late February. Sana Govender’s charges had a confidence-building unbeaten run in the Munster Development League, but this will be a sizable step up against Thurles, who have experience of playing the likes of Tralee, Shannon and Ballincollig in Munster Division 1.

Thurles are entering a transitional period as four Tipperary clubs – Thurles, Nenagh Ormond, Carrick-on-Suir and Ballina-Killaloe – have just committed to forming an amalgamated regional-based team in the New Year, following the lead of Kerry in Munster Conference 1.

Skibbereen’s Aoife Breen, whose father and brother also played for the club, said: “As I’m captain this season, I think it would be brilliant if we came out on top and won our Conference. It would solidify the fact that Skibbereen Women’s rugby is here for the long haul.” 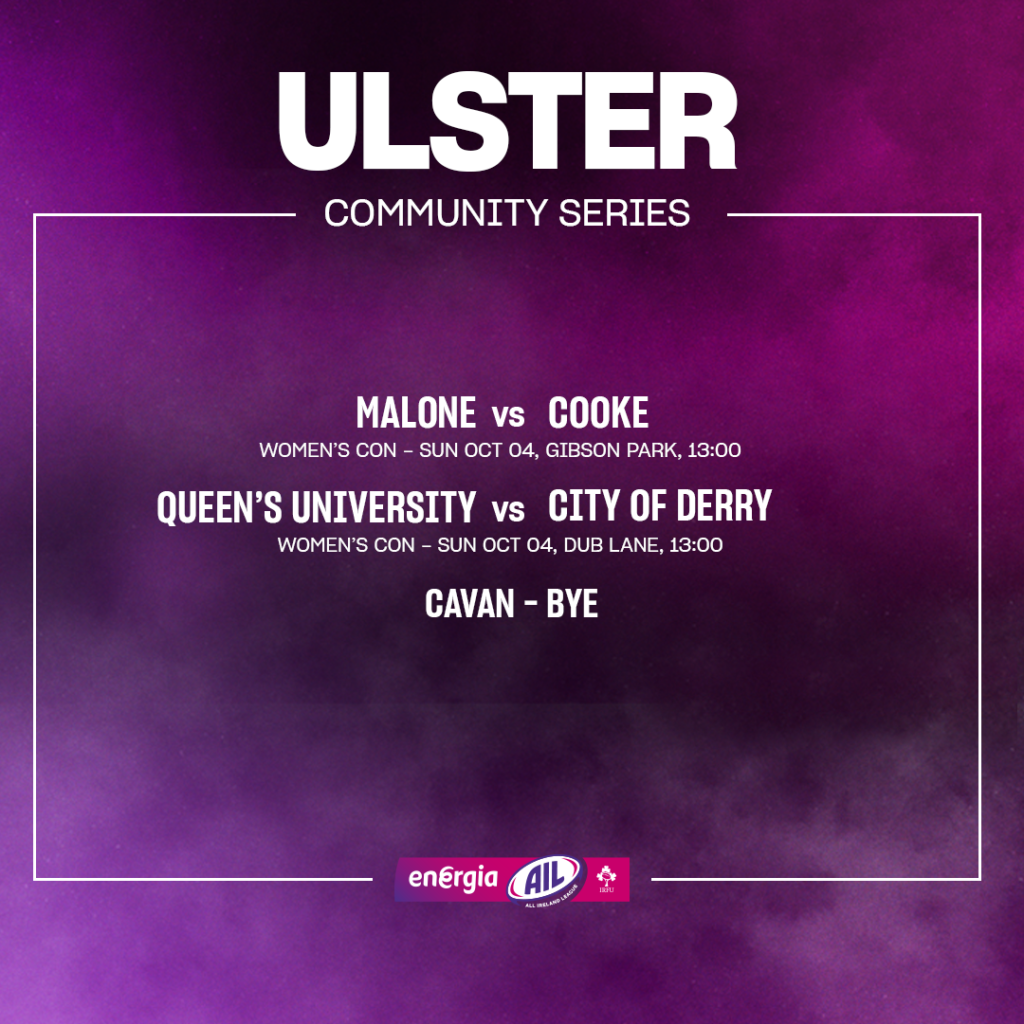 These Belfast rivals go head-to-head tomorrow in the first of three meetings across the Energia Community Series and All-Ireland League. Malone boss Grace Davitt described last year’s AIL run as ‘a baptism of fire’, but they appeared to turn a corner in the New Year with a win over Galwegians and a close battle with Old Belvedere.

“We suffered a lot of losses after dominating the Ulster league,” Davitt told BBC Northern Ireland. “It was hard for us but the girls want to progress and be competitive and stronger in the AIL. We had an abrupt end to our first season in the AIL so we feel we have a bit of unfinished business in that regard.”