Galway Corinthians, Dublin University, Cork Constitution and City of Armagh are the early leaders of their Conferences in the Energia Community Series. We preview the second round action, including the competition debuts of Galwegians and Lansdowne. 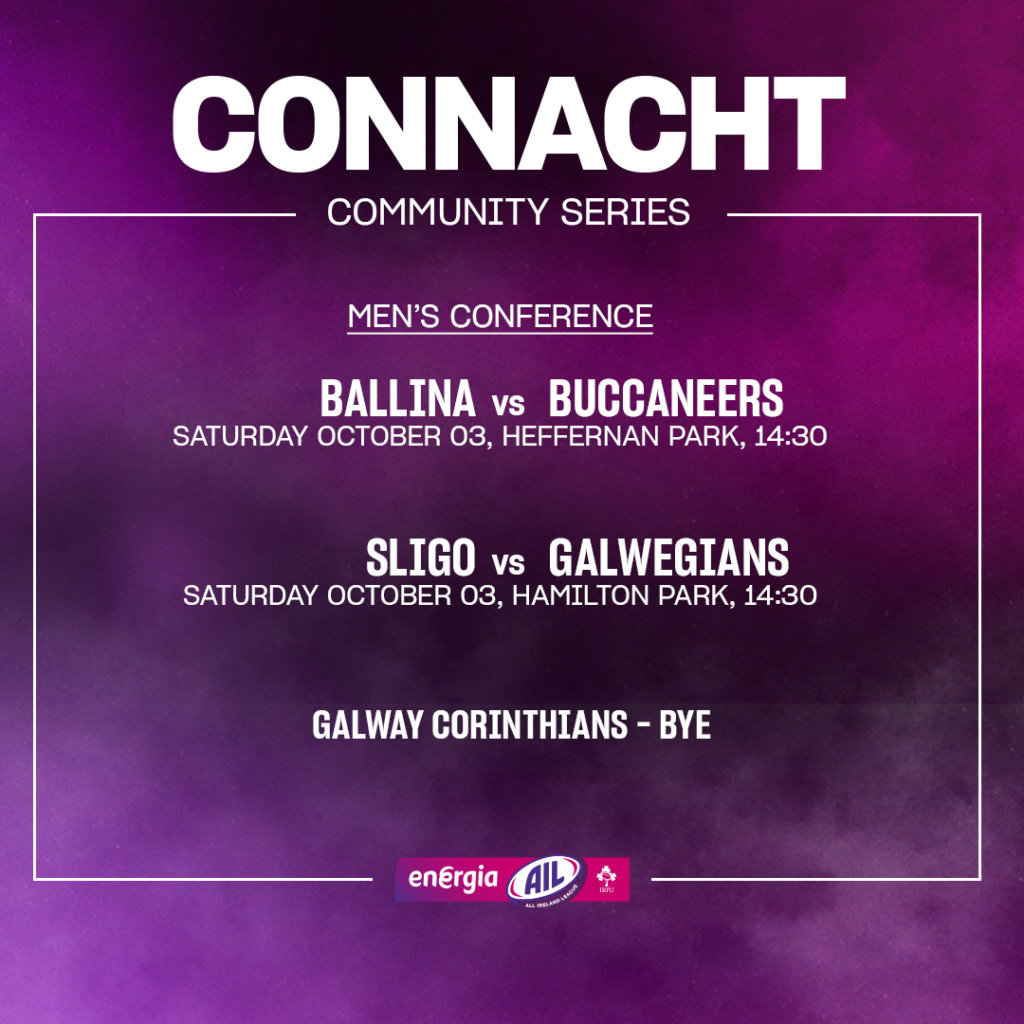 A full 80-minute performance will be the target for JP Walsh’s young Ballina side after leaking three late tries to Galway Corinthians in the first round. They had six senior debutants last Saturday and, most impressively, every single squad member had come through Mini and Youth rugby at the club.

Summing up those binding local ties, Walsh told them pre-match:

Twenty men born and bred within reach of Heffernan Park – 20 men who have come through the ranks at the club they love. I’m so proud of this squad going out today, so proud to see men wearing a jersey that means so much to them.”

Buccaneers also fielded a youthful line-up in Kolo Kiripati’s first competitive game in charge, a 33-14 home defeat to Sligo. Notably, Fergus Galvin came into the back row to play alongside his brother and new Buccs captain Evan Galvin. The Connacht Eagles-capped Mark Balaski and Rory O’Connor offer plenty of threat in the Pirates’ back-three.

Galwegians’ opening Energia Community Series fixture takes them to Strandhill. Sligo were ‘Wegians’ most regular opponents during the early part of Andrew Browne’s first season at the helm, with the Blues winning a home Division 2B game 18-10 but losing in both the Connacht Senior League (33-7) and Senior Cup (31-16).

Buccaneers tried manfully to contain Sligo’s big pack last week, which was boosted by Brazilian international tighthead Pedro Bengalo on his debut. Guilherme Coghetto, another player with Test experience from Brazil, also made an immediate impact, while talented out-half Euan Brown finished with a handsome 18 points.

Having that game under their belts, and with home advantage, you would have to favour Paddy Pearson’s men to make it two-out-of-two. Sligo assistant coach Jason East will also have some insights to share after his time playing for Galwegians for a number of years. 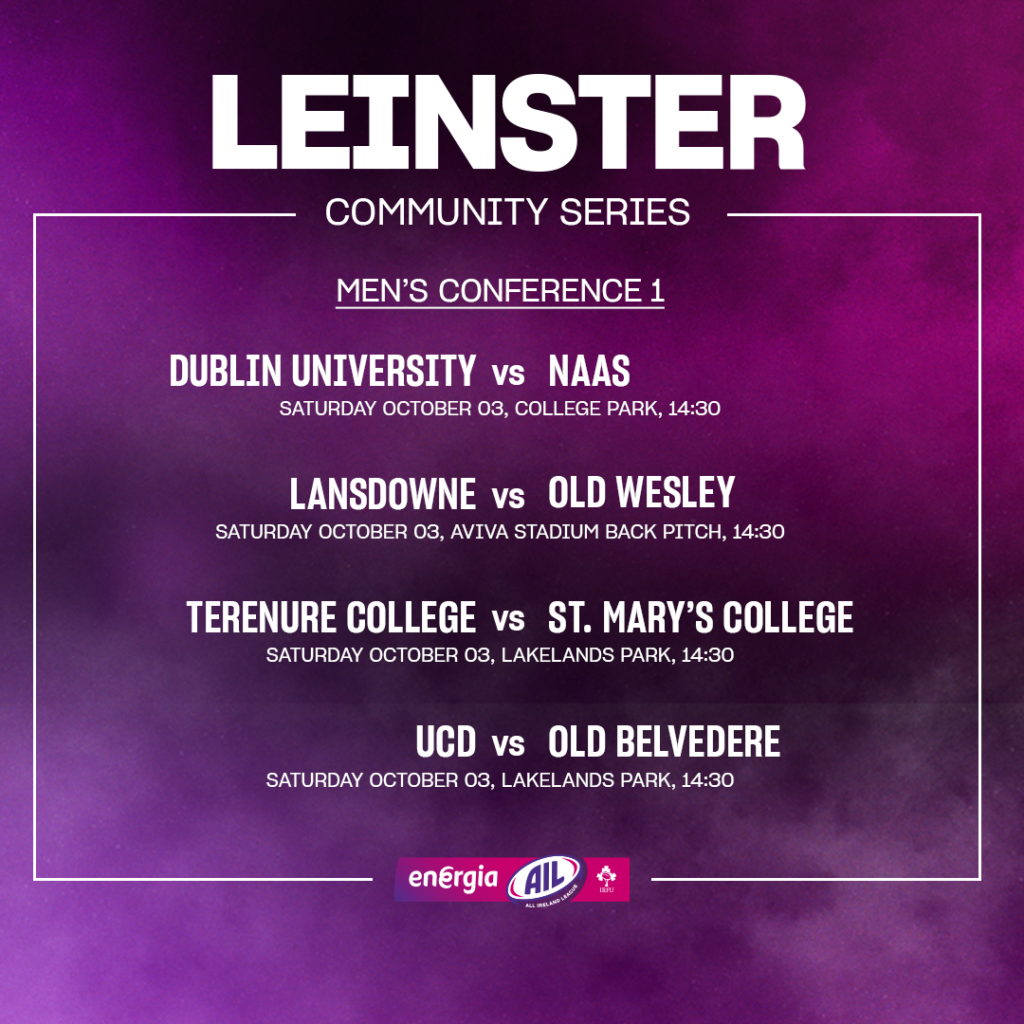 Two of the best performing teams from the first round meet, with Dublin University’s 37-14 bonus point dismissal of Old Belvedere sending them straight to the top of the table. Former Ulster Under-19 lock Harry Sheridan enjoyed a try-scoring debut in Trinity colours, showing his quality at set-piece time and in the loose.

But Tony Smeeth’s charges will be wary of a Naas team that took down Division 1A opposition last Saturday, the Cobras setting out their stall with a 19-12 victory over Terenure College. They were just that bit sharper with one of their tries coming from a charge-down and another from an interception.

Debutants Craig Ronaldson, Marcus Kiely, Tim Murphy and Sam Cahill were part of a new-look Naas back-line, and they will have to step it up another gear this Saturday against Trinity’s livewire attack. With two tries each already, Ronan Quinn and Fionn Higgins could be set for an exciting duel down the College Park touchlines.

Lansdowne enter the Energia Community Series fray against another of the first round victors, Morgan Lennon’s Old Wesley. Mark McHugh has provided stability following Mike Ruddock’s departure from Lansdowne to a permanent role at the Ospreys, and young second-year captain Jack Dwan has obvious ambitions for the season ahead.

“Winning the All-Ireland League remains the number one priority for the squad,” he said.

We’re excited to welcome several new players as well as a number of last year’s Under-20s who have stepped up. Their presence and enthusiasm have been felt throughout pre-season training and I’m sure they will continue to have an impact as we move through the season.”

Wesley make the short trip hunting for another top-flight scalp. Nenagh man Cronan Gleeson, a commanding presence at tighthead, led Wesley’s dominant scrum against UCD and also chipped in with some silky offloads. Lansdowne are rarely bettered at set-piece time on home turf, so it will undoubtedly be a key area on Saturday.

Despite the narrow defeat at Old Wesley, UCD head coach Kevin Croke will have been pleased with the fighting spirit shown by his young guns. Hooker Bobby Sheehan’s late try snatched a losing bonus point for the students, who had a strong performance from try-scoring centre Andy Marks in the backs.

Old Belvedere missed their injured captain Connor Owende against Trinity, ultimately paying the price for conceding 18 unanswered first half points. On the plus side, they were able to get some of their new players out on the pitch, and it will be interesting to see if ex-UCD pair Harry McNulty and Calum Doyle start against their former club.

With ‘Belvo in Division 1B for the past three seasons, their most recent league trip to Belfield was back in November 2016 when they lost out 23-11. Paul Pritchard scored their only try that day, with current Leinster squad members Ciaran Frawley and Tommy O’Brien contributing 18 points between them for UCD. 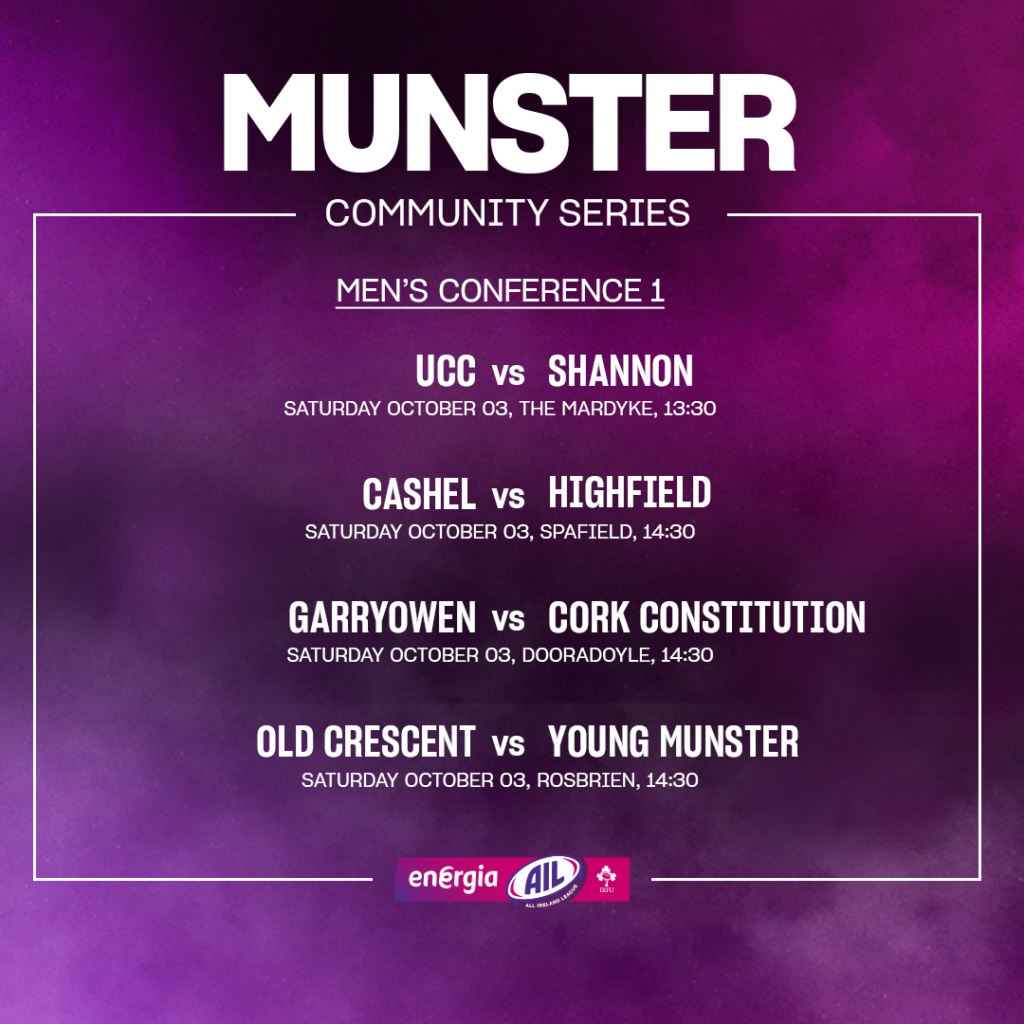 A frustrating first outing for both clubs last week, particularly Shannon who slipped up at home to Cashel. Their head coach Tadhg Bennett was not happy with how Cashel ‘beat us up up-front’ and will want his forwards to lift their intensity and aggression against UCC.

“Too many missed tackles, I think we calculated 19 missed tackles,” Bennett told SRTV. “It’s just not good enough, we weren’t at the races. The positives were scoring 30 points and our counter attack. We had six or nine Under-20 players (in the squad), but they need to adapt quickly now and get up to the speed of senior level.”

Tightening up their defence is the top priority for UCC in round two. Their best moments against Young Munster came when their scrum delivered a first-half penalty try, and winger Matt Bowen added a terrific solo try from 70 metres out, evading two attempted tackles and staying clear of a couple of chasers.

Cashel certainly grabbed the headlines in the first round, turning in a memorable performance at Coonagh to come away as 36-30 bonus point winners. Try-scoring captain Cathal Ryan led a superb all-round front row effort, but Saturday’s visit of Highfield promises even more fireworks in the forwards.

Highfield’s own bulldozing pack was central to a brilliant three-try fight-back which saw them draw 22-all with a youthful Garryowen. They will fancy their chances of making it two-from-two having led Division 1B last season and with Cashel operating a tier below them.

However, both clubs will need no reminding of just how tight a promotion race they both were involved in during the 2018/19 season. Highfield sealed promotion with a dramatic late 27-24 win at home to closest challengers Cashel – this memorable encounter produced seven tries and three yellow cards.

A tough opening to this tournament for Old Crescent, given they follow Cork Con with the visit of Young Munster, another high-ranking Division 1A club. There were plenty of positives from Crescent’s first half display against Con. Indeed, they were a whisker away from a third try when trailing 28-14 at the break.

Matt Brown’s men would dearly love to repeat last January’s Limerick Charity Cup final victory over Munsters. Back then prop Cathal O’Reilly’s try right at the death saw Crescent prevail 17-10 on a night when both teams were missing a number of first XV regulars.

The Cookies have a decent amount of early-season momentum, though, and with teenage scrum half Donnacha O’Callaghan an exciting prospect alongside the surefooted Evan Cusack, they are expected to prove too strong for their Limerick rivals. 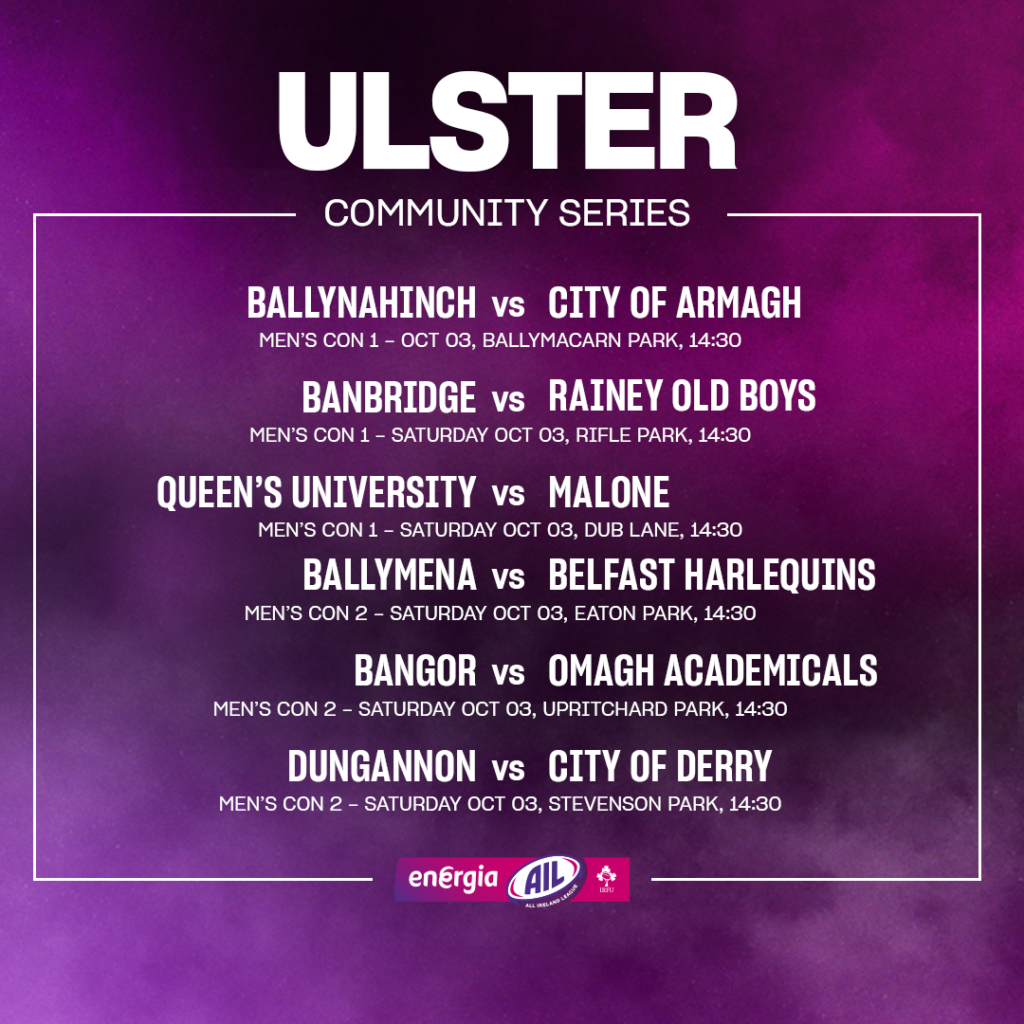 A top of the table clash and a game that could potentially have decisive implications for Ulster’s race to reach the Energia Bateman Cup semi-finals. City of Armagh were a class apart against Rainey Old Boys, but a much stiffer test awaits from Division 1A outfit Ballynahinch.

City of Armagh’s new head coach Chris Parker is really embracing the Energia Community Series, noting that ‘local derbies bring out the best in everyone’. “The boys make life easy for me, they’re such a coachable group,” he said. “We’re looking forward to getting more matches under our belt and seeing where we can go.”

Ballynahinch will have revenge on their minds after losing last March’s Ulster Senior Cup final to Armagh on a 38-34 scoreline. ‘Hinch full-back Ross Adair and Armagh flyer Shea O’Brien showed bags of attacking flair in that game and hopefully more of the same will be on view at Ballymacarn Park on Saturday.