60 seconds left on the clock. One last chance. Never mind the match-winning conversion from the touchline, this is the moment that sticks in Mark Roche‘s memory. Two years on, it still serves as a lesson. The fine margins, the bounce of a ball between winning and losing. With time running out, Ireland win a penalty on the far touchline. A two-point game, any mistake now is fatal. The London Sevens, the bronze medal final at Twickenham.

“England were eating up the clock,” Roche remembers. “And we got that penalty and kicked for touch on halfway. I think it was Jimmy O’Brien, who had just come on, called a line-out we hadn’t used all weekend. It was pretty much the last play. 19-14 down, I had to get the throw right.”

Bryan Mollen was Ireland’s jumper, Foster Horan and Ian Fitzpatrick the lifters. England were ready to steal, sensing their opportunity to shut the game down and clinch third place on home soil. The referee fussed over the spacing, the seconds ticked down. It had to be right. The throw, the lift, the transition. But it wasn’t, Roche’s throw skewed up and away from Mollen’s reach, the game appearing to slip agonisingly from Ireland’s grasp.

“Even now I’m not sure what happened in that moment,” Roche continues. “I’ve watched it back so many times and I still don’t know how the ball bounced as high as it did and over the England player back into Fitzy’s hands. The ruck formed on the halfway line and we managed to get it through the hands.”

Fitzpatrick wrestles for possession and fights in the tackle to get the ball back for Horan to play scrum-half. Roche stands at out-half, with O’Brien, Hugo Keenan and Jordan Conroy outside them. O’Brien acts as the decoy runner inside, creating space for Keenan to float cross-field and invite Conroy to do his stuff. Just give him the ball in space. Air Jordan. A big play on the big stage. 19-19.

“For me, I go from thinking I’ve just lost the game when I overthrow the line-out to having a chance to win it with the conversion,” Roche says. “I won’t forget that moment because that just sums up how things can change so quickly, how you can go from zero to hero in the space of a couple of seconds.”

No time to dwell on the previous mistake, Roche had one more job. The biggest kick of his career. For a bronze medal, but for a seminal victory that would embolden this team of history makers with the confidence, the belief and the self-assurance that they belonged at the very top level. What has followed in the two years since can be traced back to that Sunday evening in early June at Twickenham. It was, in many ways, the springboard.

From the touchline, Roche wasn’t missing it. A quick glance at the stadium clock. 13 seconds left. He had to trust the process, trust the steps. Perfect the ball drop, execute the perfect strike. And so it sailed between the posts, a majestic skyscraper of a conversion from the left. The flags went up and Ireland led 21-19.

Roche smiles: “When you get the perfect strike and you know it’s going through the posts, there’s no better feeling because you know you’ve just given the lads another two points for all their hard work.” 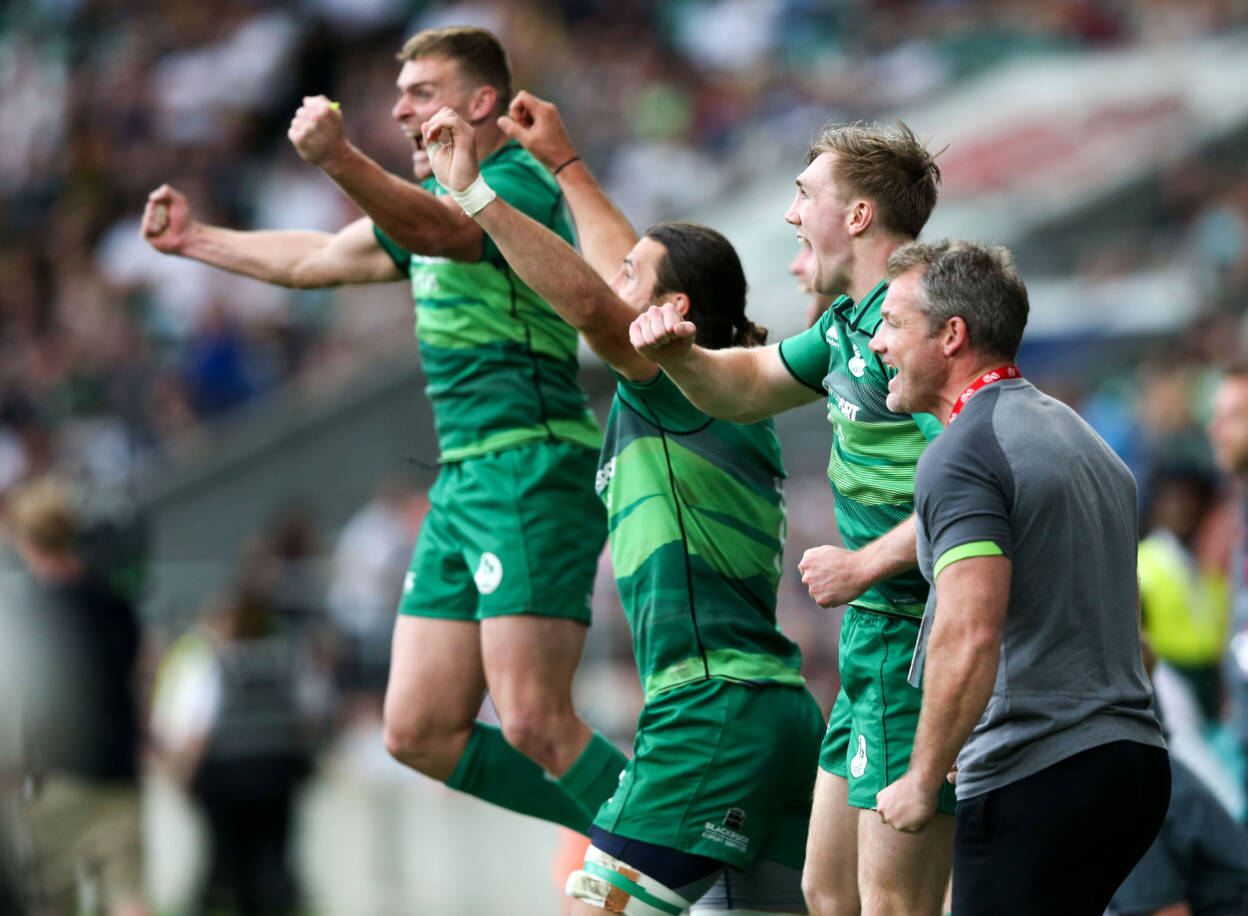 Now just get the ball back from the kick-off and get it out. The next job fell to Billy Dardis. Another pressurised kick, this time the restart. History beckons, but the margins remain so fine.

“I’ve always said Billy’s restart was the harder of the two kicks. If he is too short, he gives away a free-kick and then if he doesn’t get it absolutely on the money, he gives them the ball back uncontested and they can launch one final attack to win it. There was so much pressure on Billy having just come on but thank God he got it spot on and Hugo was able to push it back for Jimmy to kick it off.”

Cue ecstatic, medal-winning celebrations. The bench – including Harry McNulty, John O’Donnell and Fitzpatrick – jump the hoardings and punch the air, the players on the pitch embrace and savour the moment and atmosphere. An historic weekend capped off in the most remarkable circumstances, Anthony Eddy‘s Ireland defying all the odds to finish third as an invitational team.

“It was absolutely huge for us,” Fitzpatrick says. “We had gone into the tournament with our confidence dented having failed to qualify for the World Series in Hong Kong a few months before and to do what we did was amazing. I think it was a turning point for the team because we needed something to spur us on again after the disappointment of Hong Kong. It was a memorable week.”

Even before a ball was kicked, it was a momentous week for the Ireland Men’s Sevens. To feature at their first World Series event – particularly at Twickenham – was a significant juncture on the journey up through the ranks from Rugby Europe Division C and the Dardis captained side, under the guidance of Eddy, Head Coach Stan McDowell and Team Manager James Topping, lived up to the billing, scaling rarefied heights in London to announce themselves to the world.

“We said it in the team meeting before our first game against Australia – we had absolutely nothing to lose,” Roche recalls. “We knew we were good enough to take on some of these teams and as a fresh side coming in, most of the big boys had never seen us play before. We didn’t have anything to lose so our attitude was go out, give it our all and go for it.”

And as is always the case in sport, luck played its part on the opening day. Having been comfortably defeated by Australia in their opening Pool B game, Ireland rebounded strongly against Spain to record a 38-10 victory, as Conroy (2), O’Brien (2), McNulty and Terry Kennedy all crossed.

“We played the role of an invitational team on that first day,” Fitzpatrick admits. “We were up and down and knowing we would go through to the quarter-finals with a win against Wales in our final Pool game, we just weren’t on it and were beaten 21-19. But we had luck on our side to go through to the quarters on points difference and that was huge for us. I remember the team meeting on the Saturday night as it was a really positive one. We knew where we had to be better and knew we could just go out and have a go at USA in the quarter-final.”

And that they did. The power and pace of USA vanquished, Ireland turning the tournament on its head. Conroy, O’Donnell and Keenan all crossed in the first half. Dreamland for those in green, both on the pitch and in the Twickenham stands. A statement of intent, an indelible 22-12 victory. 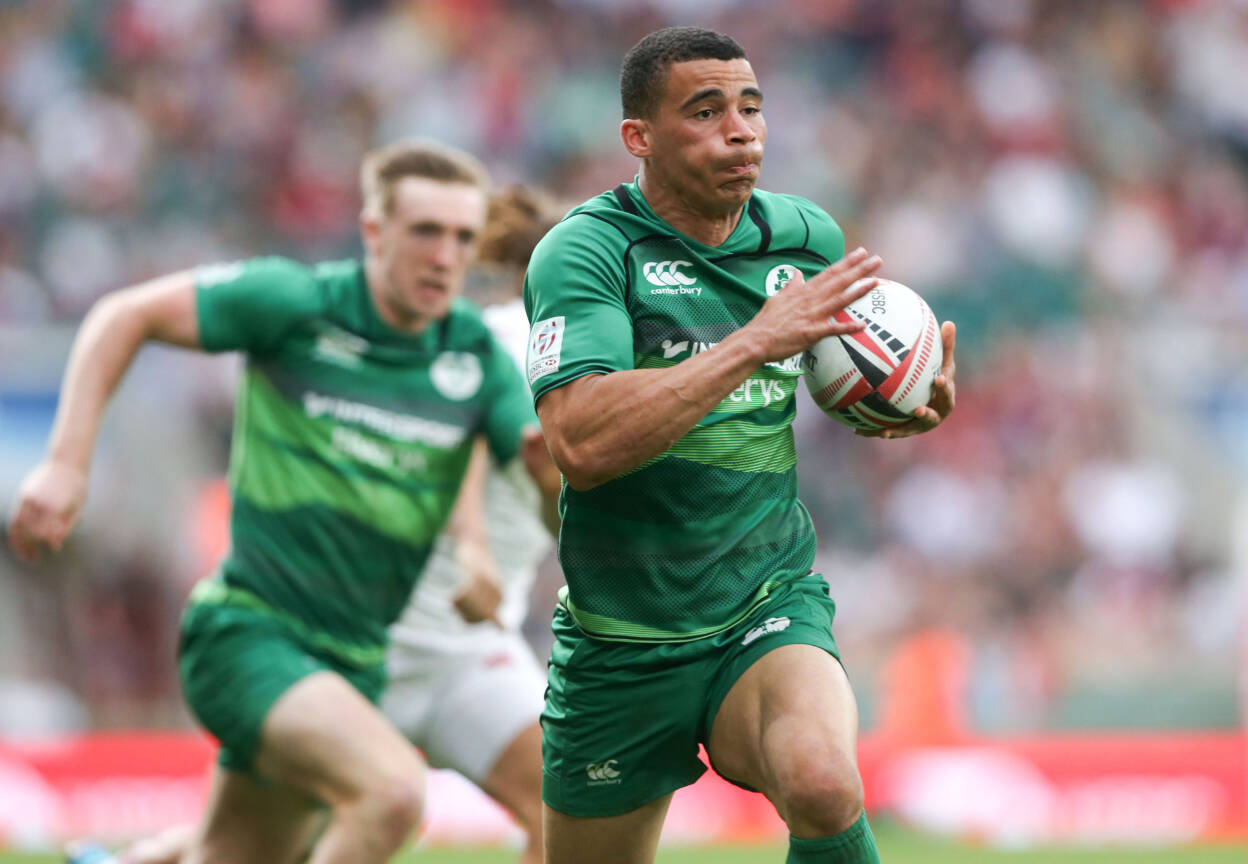 “They had the superstars in their team,” Fitzpatrick explains. “Going into the game we just took the fight to them, we had a good start and then Jordan did his stuff on the wing. He got around Carlin Isles and everyone stood up and took notice. We probably weren’t that shocked because we knew what he could do but the rest of the rugby world were made aware of what Jordo could do from then.”

Fiji proved a hurdle too far in the semi-final, but the best was yet to come from Ireland. Conroy blazed a trail, scoring eight tries, including a hat-trick in the third place final, to earn a place on the coveted Dream Team alongside Roche.

“I think it has to be up there as number one,” Roche says, reflecting on his own performances across the weekend. “Some of the lads will rightly have Hong Kong last year as their highlight but for me on a personal level, that tournament will always stand out. It was a highlight and to get on the Dream Team as well made it even better. The lads came into the dressing room after and told myself and Jordan we’d got on the Dream Team but I had no idea what that was. We were new to the whole thing but you couldn’t have scripted it better.”

Overall, that week in London provided Ireland with the stimulus required to push on at the 2018 Rugby World Cup Sevens later that year, before achieving the Holy Grail of World Series qualification in Hong Kong in 2019.

“We rebuilt that confidence again after London,” Roche adds. “We didn’t know where we were going to go after Hong Kong and to go out and do what we did gave us a huge boost. We were such a close unit, such a close group of friends, and it was just an amazing weekend. It was an unbelievable experience and gave us all a taste of what being on the World Series would be like.”

Fitzpatrick agrees: “We had built up from Division C in Europe and it was the first time we had got to taste what it was like being on the Series. We were in a hotel that was pretty much attached to Stamford Bridge and when we ate our meals, we looked out on the pitch. We had come a long way and it was quite a motivational tournament for us.

“And while there was no pressure on us as an invitational team, it was a tournament we needed to do well in for ourselves as much as anything and I’m thankful we did! I think it really was the turning point for us as a team to get the confidence and motivation back to kick on again and push for World Series qualification.

“Once we had done so well in London, it confirmed to us that we should be there and it confirmed to everyone watching that that was the level we needed to be competing at.”