Tester, who joined Munster Rugby in November 2016 and is part of a team of 10 IRFU Performance Nutritionists working across the four provinces, National Talent Pathway and the Sevens and Women’s programmes, presented on the topic of ‘The Impact of Dietary Intake on Immune Function.’

Having completed her PhD by assessing the role of the diet in immune function in professional rugby players, Tester was able to provide expertise to an audience of over 350 people, while also outlining how the IRFU’s team of Performance Nutritionists are working collaboratively to ensure the players are in the best possible shape to return to group training whenever it is safe to do so.

“What I really wanted to focus on was the current climate and the impacts on an athlete’s immune system,” Tester tells IrishRugby.ie. “It’s not just the change of training and sporting demands that they’ve had to adapt to but also the change of environment and behavioural practices, all of which hugely impact the immune system.

“What has happened over the last couple of weeks and months is that players have had to adapt to a completely different routine. Their environment and sleep patterns haves changed, their training stimulus has changed and then they’re also dealing with huge psychological stresses like everyone in all sectors of society. Their day-to-day routines are disrupted and all of those aspects help build a well-functioning immune system.”

After hearing from counterparts working with Harlequins, Leeds United Football Club, New York Giants and the Qhubeka Men’s Professional Cycling team among others, Tester was able to extract a wealth of information from the day-long event and isolate the tidbits that might be relevant to the high performance environment at Munster and, more generally, in Irish Rugby.

But, overall, Tester was reassured to hear the knowledge and expertise of the IRFU’s team of Performance Nutritionists, and the support and strategies in place within Irish Rugby, are aligned with international best practice.

“It was quite a reassuring day for us as a team of nutritionists working around the country,” she continued. “We work very much as a team, even if we are in our day-to-day roles with the provinces or international squads, and it’s all about doing our best for the greater good of Irish Rugby, particularly at a time like this. 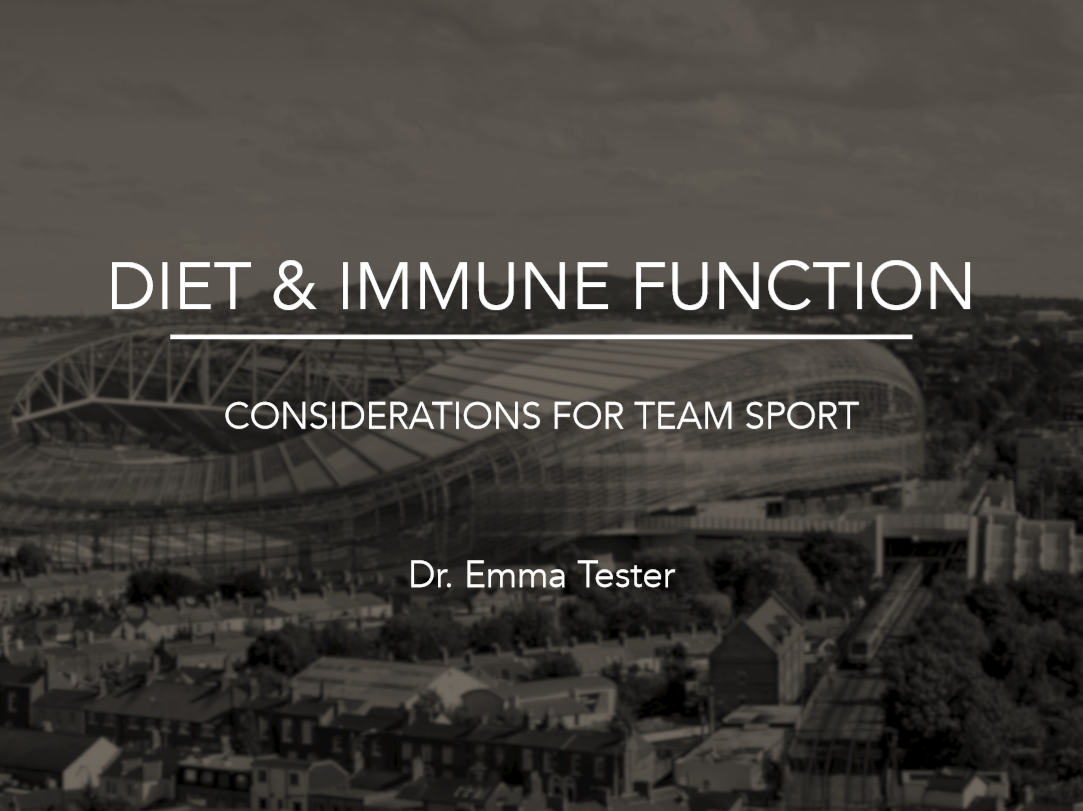 “Because there is so much uncertainty around the future, we are all facing huge challenges. We don’t know when we’re going to return to training or return to competition so we don’t know when the players will need to peak and taper, whether it’s from an athletic performance or nutrition point of view.”

For Tester and the Performance Nutritionists, the key has been to go back to basics with the players during this period.

“It has been about providing as much information as we can but without overwhelming them as it’s a very overwhelming time. The players, and it’s not exclusive to Munster, in general professional athletes will normally spend time eating out and about but that’s not an option now so they have to upskill and get better in the kitchen and get better at knowing what to put in the pan to get what they need on the plate.

“What we’ve provided them with is basic things like shopping lists and recipes, as well as individualised and sports specific recommended nutritional intakes. There are lots of different changes as we go through the different phases of this period but because it’s a very unpredictable time frame, we have to be really responsive to that and at a basic level, that is just providing as much support as we can. “

Ultimately, each of the departments – Nutrition, Athletic Performance and Medical – are working closely together alongside the coaching staff to ensure the players are in the best possible shape, both mentally and physically, when the time comes to return to training and then eventually competition.

“It really is a huge collective effort,” Tester adds. “We’re working really hard together to ensure the players are coming back in good shape and robust and ready to train. It’s not just a session on a Watt bike and lifting weights in their garden, but also all the other aspects around performance like nutrition and rehab.

“Everyone has tried to see this as an opportunity to be better and come back in the best condition possible and it’s our jobs, as an IRFU Nutrition team, to support them so they’re ready and raring to go whenever it is safe to do so.”

For more from the IRFU’s team of Performance Nutritionists, you can follow our ongoing ‘Eat Well, Feel Well’ series here.