As is the case for many families, life in lockdown has changed the immediate outlook for the Catts. The last few weeks ought to have been a time of reflection, and a chance to take stock, for Mike Catt following his first Guinness Six Nations on Andy Farrell‘s Ireland coaching team, but all best laid plans have been put on hold.

Having moved over to Dublin before Christmas to begin his role as Ireland assistant coach, Catt had identified this post-Six Nations window to complete the rest of the transition and bring his family over from England, but instead the move and house hunt will have to wait as the world continues to battle the Covid-19 pandemic.

It is, all things considered, a minor inconvenience in the grand scheme of things but the postponement of Ireland’s final two Championship games against Italy and France, coupled with the ongoing suspension of the rugby season, means it has been a somewhat unusual start to Catt’s time with Ireland.

The curtailed Six Nations further limited the 48-year-old’s opportunity to settle into the role on Farrell’s coaching team and stamp his mark on Ireland’s attack, although there were promising glimpses of the former England centre’s blueprint in the opening two victories over Scotland and Wales at the Aviva Stadium.

And while the Round 3 defeat to England in London was a disappointing way for Ireland’s campaign to finish, Catt – who joined the set-up having spent three-and-a-half years with Conor O’Shea‘s Italy – has been able to reflect on his first six months, and three matches, in the role with a fair degree of positivity and encouragement, while also remaining cognisant of the bigger picture and the hard work that is ahead.

“There had been quite a lot of transition with some new coaches coming in and a few new faces on the playing side of it too on the back of a World Cup that didn’t go to according to plan,” Catt tells IrishRugby.ie. “For me, it was always going to be very interesting and exciting in terms of gauging where we were as a squad, how we gelled as a coaching team and how quickly we were able to gel as a whole group.

“The whole challenge of coming into an exceptionally talented team who have achieved some amazing things in the not so distant past was hugely exciting for me and one I desperately needed. To get the two wins against Scotland and Wales under our belt was brilliant and obviously the England game was hugely disappointing, but having had time to look back on that and reflect on the Six Nations as a whole, two wins from three wasn’t too bad a start -if we can call it that.” 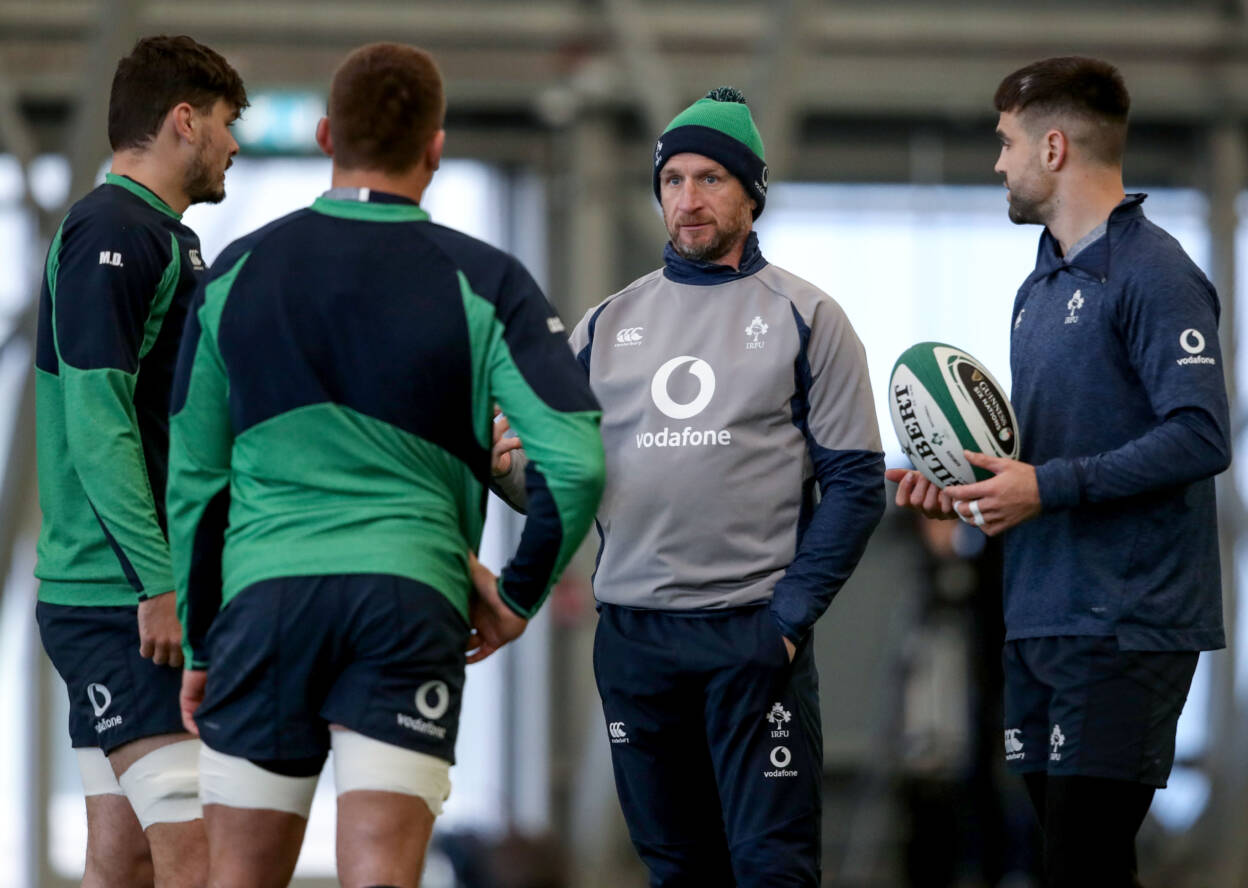 From his illustrious and distinguished playing days, Catt – who won 75 caps for England – was no stranger to Six Nations weekends in Dublin, and a familiar face to Irish supporters. During his coaching career, he had studied and analysed Ireland in great detail, both during his time with Stuart Lancaster‘s England and, most recently, with Italy up to and including the 2019 World Cup in Japan.

It was with that knowledge and deep respect for Ireland, coupled with the opportunity to be re-united with Farrell, that made Catt’s decision to take up the position a straightforward one. Both he and Farrell worked together closely with England, enjoying considerable success as part of Lancaster’s coaching ticket, and their relationship extends further back to their respective playing days having shared the same England dressing room together.

“The chance to work with Andy again got me excited,” Catt continues. “I worked with him at England and I think we worked exceptionally well together back then and we’ve also got pretty much the same philosophy on how we want the game to be played. We want to be able to implement that with Ireland and then with the calibre of player here, that made it a very exciting role to take on.

“I’ve always admired Ireland teams having come up against some brilliant ones down through the years and to be able to come over here and join such a professional set-up is also crucial for my development as a coach.”

“I’ve always been a big believer of until you’ve coached somebody, you don’t actually know who they are or how good they are,” he says. “I’ve always been plotting against an Ireland team with England and then Italy. I’ve seen things a little bit differently as someone who has come up against Ireland and now having joined the team, I have been able to use those lessons and bring that different perspective.

“It has been really interesting for me. I’ve an idea of the strengths and weaknesses of players from studying their game and watching them on TV but until you work with someone or work with a team, you don’t really know their strengths and weaknesses to be honest. Therefore, my big remit has been to build relationships with the players and staff. Just really getting to know the players and once I’ve got a clear understanding of how they all operate individually, we can properly see where we go as a team. That’s the crucial remit from my point of view and we did some good things during the Six Nations in that regard.”

Expanding on his hopes for Ireland’s offensive gameplan under his watch, Catt acknowledges it will not be an instant recipe for success and forging new beginnings, with Farrell as head coach and John Fogarty also recently in his role as scrum coach, will take time.

“Overall it’s hugely exciting because I know Andy is driven to take this team to another level and we’re all committed to that,” Catt explains. 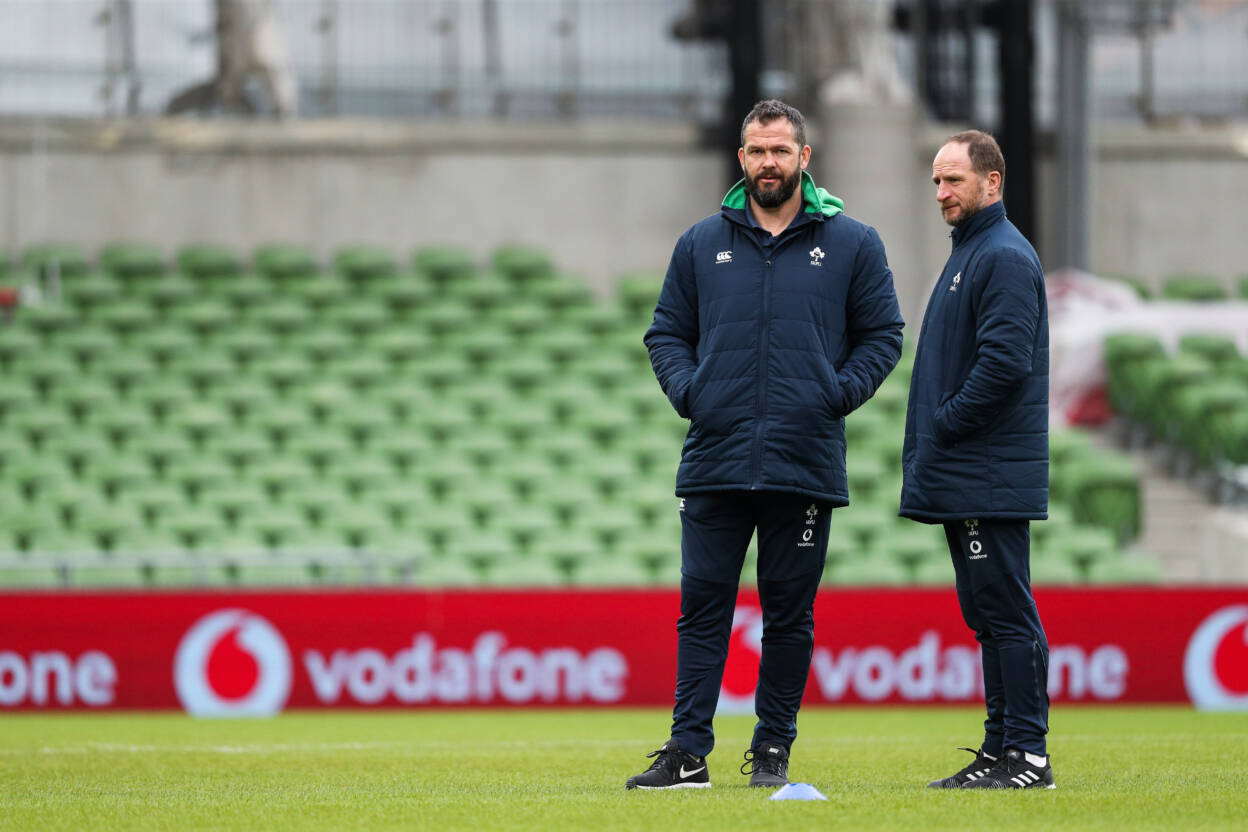 “We’ve got some very talented players in the dressing room, it’s just about making sure they’re able to play our way, the way we want to play and go out there and express ourselves.

“We’ve got some great individual players there who have got X-Factor and we need to make sure we give them the opportunity to go out and do what they’re good at. It’s very early days and things don’t happen overnight. We’re totally aware of that as a group of coaches and a group of players but we know where we are and where we need to get to. The next focus for us will be to build on what we did in the Six Nations and to make sure that England performance doesn’t happen again.

“I know as a group we’re chomping at the bit to firstly put the England game to bed but also to really see where we can go as a team against the best in the world again and hopefully we’ll get that opportunity in November.”

For now, Catt, like the rest of us, has been catching up on family time and using this window to prepare for his return to work. What shape the rest of the year will take remains unclear but what’s certain is that Catt, having enjoyed a brief taste of life in Dublin and in the Ireland coaching box, is hugely optimistic and excited about the future.

“The Irish people have been so accommodating and the atmosphere at the Aviva Stadium for our first two home games was amazing,” he adds. “My wife and daughters have been welcomed with open arms whenever they’ve been over and that’s been great as they feel at home here too. Andy is such a family-driven person and to have that social aspect in the camp bodes well for the future. We can’t wait for what’s to come.”