“There it is, Niamh Briggs kicks for touch, and Ireland have achieved the unthinkable. They have defeated four-times world champions, New Zealand, and have secured a dramatic win here. What a game. It has ended on a scoreline of New Zealand 14, but listen to this, Ireland 17. What a day to remember for Ireland.”

It was a joyful moment they had all experienced, but it wasn’t until Sunday afternoon – almost six years later – that the Briggs family sat down together and relived the highs and lows, the rollercoaster of emotions and then the unadulterated ecstasy of Ireland’s seismic Women’s World Cup victory over the Black Ferns as one. There were similar scenes all around the country, and beyond, as that squad of players, led by the imperious Fiona Coughlan, escaped the uncertainty of today to be transported back to those halcyon days in Marcoussis.

One of the abiding memories from that historic occasion was the sight of Ali Miller slaloming inside and then out to streak past the last Kiwi defender and score the crucial try in the near corner, the score replayed thousands of times in the intervening years and rightly so as one of the great moments in Irish Rugby, but to watch those full 80 minutes back in full gives you a renewed appreciation of the performance and scale of victory.

Niamh Briggs, who converted Miller’s try brilliantly from the touchline and then scored the winning points from the tee with 10 minutes remaining, had never watched the game back in it’s entirety before sitting down with her family on Sunday afternoon to tune into World Rugby’s stream, the sights and sounds of that day in France bringing her right back to the sweltering August sunshine and the heat of battle.

“I was really nervous watching it again,” Briggs laughs. “My Dad was over there for that game but my Mum and Granny had watched it back at home so to be able to come together and watch it all in the same room was special and I know a lot of the girls were the exact same all over the country. Even though it’s six years on and you know the result and exactly what happens, you just live through every moment again.”

Having won the Grand Slam 18 months previous, Philip Doyle‘s squad had built encouraging momentum heading towards the 2014 World Cup and a 23-17 defeat of USA in their opening Pool B game had set them up perfectly for a showdown with the four-time world champions in the second round of matches. But with just one team from each Pool and a best runner-up progressing to the semi-finals, Ireland knew they had to scale heights no Irish team had scaled before and conquer New Zealand.

“We were full of confidence having come in off the back of that Grand Slam in 2013,” Briggs recalls. “We had been building together as a squad for a few years and I think when you get to that stage, when everyone is on that same journey, you have this innate belief in each other and I just remember it being such a calm and composed environment. 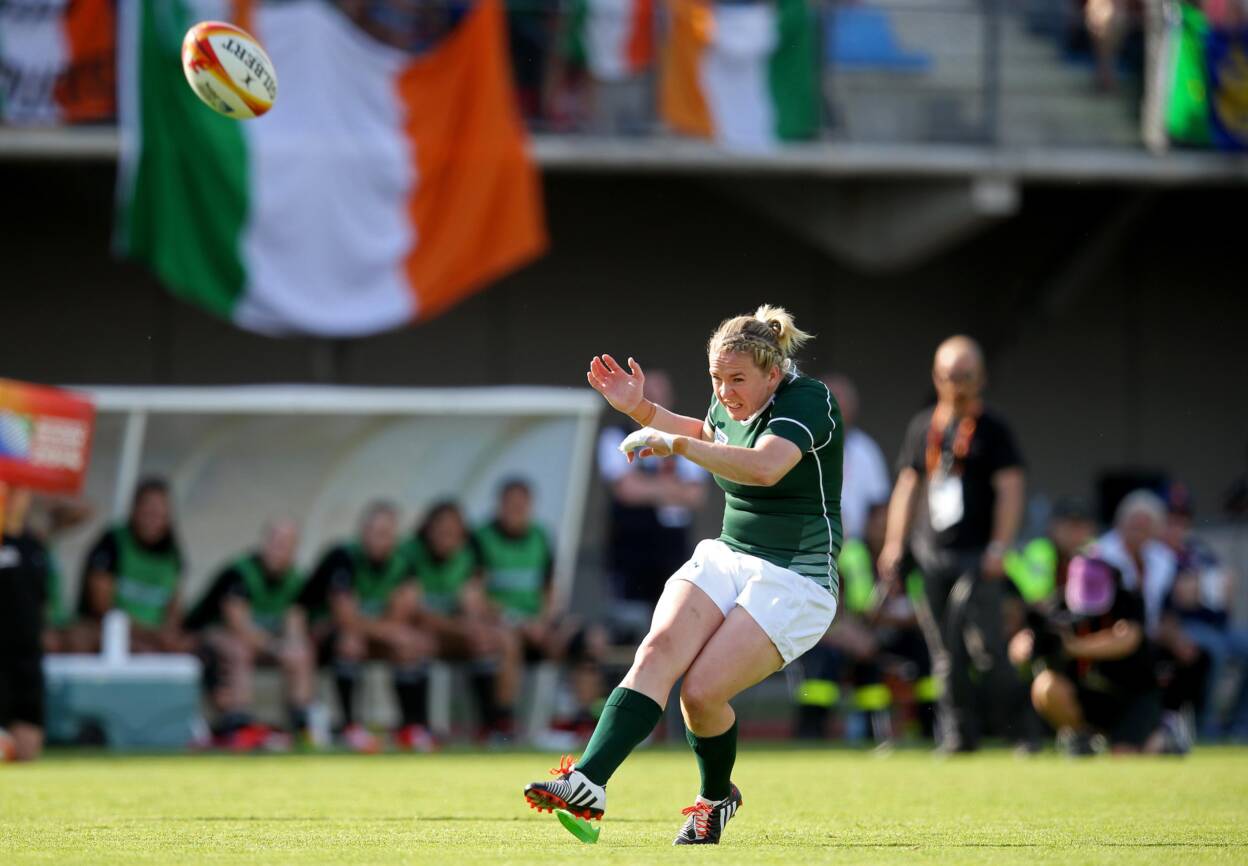 “Even in the training sessions building up towards it, there was just this quiet confidence emanating down from Goose [Philip Doyle] and Greg [McWilliams, assistant coach]. That just rippled around the squad.”

As Briggs watched the first half unfold on Sunday, she recalled the calming words of Coughlan after Ireland’s early dominance of possession had counted for little when Kelly Brazier‘s boot and then a try from Selica Winiata extended the Black Ferns’ lead.

“That was the thing, even when we went behind there was no panic. I just remember Fiona under the posts saying that’s fine, we’re moving on from that and we’re going to go back up and get the next score. There was absolutely no panic, there was no sense of oh God, let’s go back into our shells because we can’t beat this team. It was, let’s go at them.

“We also felt going into that tournament our fitness was the best it had ever been and when you have that belief that you’re fitter, faster and stronger than the opposition, you kind of believe that anything can happen. Marian Earls, our Strength and Conditioning coach, was brilliant. That was drilled into us. Fitter, faster, stronger. It was just a brilliant squad of players and coaching staff and I’m not sure I’ve ever had that sense of belief going into a game before.”

Ireland, not deterred by the scoreboard or inhibited by the scale of the task facing them, duly responded through Heather O’Brien, and Briggs’ conversion made it a one-point game at half-time. The drama, though, was still to come. Another Brazier penalty kept the Black Ferns ahead approaching the hour mark. And then, through Briggs’ piercing counter-attack, and the potent finishing ability of Miller, we witnessed a try for the ages.

“I started playing rugby with Ali back in WIT and we’ve always had a really good connection in terms of being able find each other on the pitch,” Briggs says, looking back at her role in the build-up to Miller’s iconic try. The conversion, from wide on the touchline, was equally impressive and crucial.

Having missed a penalty earlier in the game, Briggs showed huge temperament and composure to kick the extras and then land the winning penalty in the 70th minute from the opposite side of the pitch, handing Ireland a momentous victory and sparking jubilant scenes on the pitch and in the stand.

“As a kicker, those moments are your bread and butter,” she continues. “After the first kick I was just so disappointed not to have struck it well, I was really focused the next time. From the touchline, nobody really expects you to get them but when that conversion went over, I felt as if I could kick anything. The penalty to win it, Greg came out to hand me the tee and he started talking about the weather. He was brilliant at that, brilliant at taking pressure off players and empowering you to think really positively. 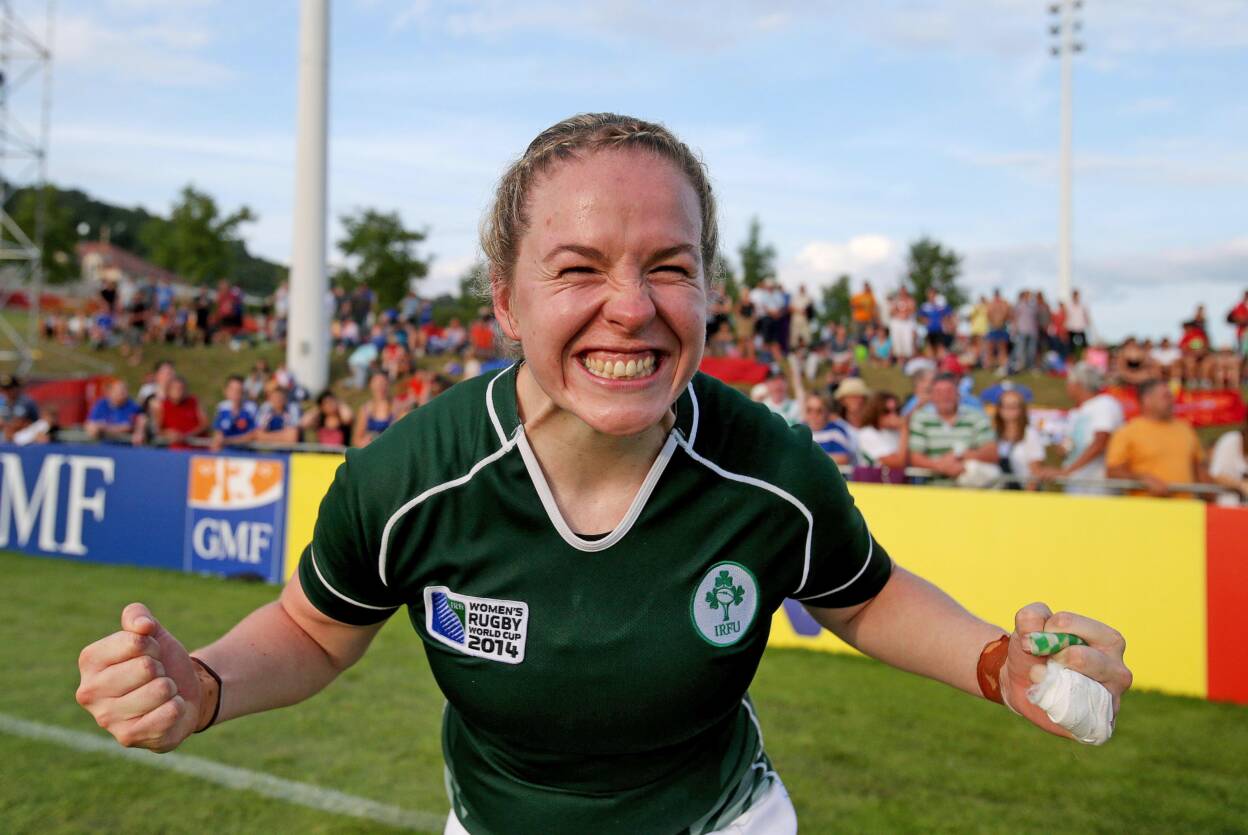 “I was able to kick the winning points but that was just a small contribution to the overall effort. There was a lot of hard work from every single player. Grace Davitt was unbelievable in the first 40 minutes, she took some punishment. Then Jenny Murphy was unbelievable in the second half when she came on at half-time but it was all marshalled by Lynne Cantwell, who probably had one of the games of her life. Everybody played well. The list goes on really, every single player in a green jersey had a good game that day.”

“I was just really proud watching it back,” Briggs says. “As time moves on and other things happen, such as the injuries for me, you can lose perspective on what it was like before and how much you enjoyed it. It brought up so many good memories for me and gave me a big lift during these difficult times.

To be able to go back and watch everybody work so hard for each other, everyone was brilliant and that really stood out. The attitude of bodies on the line, working hard for each other and getting back up off the ground to make that next tackle.

After the stream had concluded with the intoxicating scenes of Irish celebrations, the 2014 Women’s World Cup squad reminisced long into Sunday night, as they came together with members of the management team to continue the post-match analysis on a video call.

“Nora Stapleton did an excellent interview recently where she said we don’t want to be reliving or hanging onto that one win but you also have to realise how important it was, not just for us an Irish Women’s rugby team, but for women’s rugby and sport in general,” Briggs adds. “When you’re playing and in that mindset, it can be quite difficult to appreciate what you’ve done and the significance of a win.

“Even as we came away from that tournament, my lingering feeling at the time was disappointment as we didn’t reach the final but now looking back, I didn’t get to another World Cup due to injury, and as time moves on you realise how brilliant that was and how brilliant a time it was. The overwhelming feeling on Sunday watching it in full for the first time was just pride. I was so proud of the effort we put in as a squad.

“It was also brilliant to see the girls and catch up, because life can get in the way and people move on with jobs and their own family lives so to be able to revisit the good times and the bonds you had with your team-mates was just brilliant. The only thing was we had a few technical issues and the joke was how could we beat New Zealand but couldn’t work a Zoom call! We got there in the end and it brought back great memories.”