Nigel Correll has been refereeing across all levels of the domestic game for the last 14 years. Specsavers, The Official Optician and Audiologist of Irish Rugby. ©INPHO/Bryan Keane

A cursory scroll through the photo archives provides a snapshot of Nigel Correll‘s career in the middle. Domestically, he has been involved in all the showpiece events in the calendar, from the Energia All-Ireland League and Bateman Cup finals, to Leinster Senior Schools Cup deciders and age-grade inter-provincials and internationals. And then, in the professional game, there have been assignments across Europe as an assistant referee in the Heineken Champions Cup, Challenge Cup and, closer to home, in the Guinness PRO14.

For one of Ireland’s lead officials, it has been a remarkable journey since first completing an introductory course to rugby refereeing in secondary school almost two decades ago now, and in that time an avocation has developed into something so much more, bringing Correll on the most unexpected ride and placing him firmly at the heart of the action up and down the country every Saturday afternoon.

Officiating across all levels domestically for the last 14 years, each milestone along the way – from his first J3 game right up to running the line in big European games – has been one more than Correll expected, but his route to the top and climbing of the ladder provides an illuminating road-map for any young referee harbouring similar ambitions.

Correll’s interest in picking up the whistle piqued when the flame began to flicker on his brief playing career with Old Wesley RFC, the intrigue of watching Alan Lewis and Alain Rolland on the international stage motivating him to partake in that initial IRFU course led by David Keane, in his previous role as the IRFU Referee Development Officer.

“When I left school, I went back to do some coaching and inevitably you get thrown into refereeing a couple of games here and there,” Correll tells IrishRugby.ie. “I hadn’t refereed a game in an official capacity but just from doing one or two every second Wednesday, I quickly discovered I was more comfortable with the whistle than I was running around the pitch with ball in hand. I just felt I knew what I was doing and it was something I wanted to explore.”

Correll, a scrum-half, played for a couple of seasons with Old Wesley but his heart and mind were set on pursuing a different role in rugby, the prospect of remaining centrally involved in the game at a high level the key factor in his decision to pick up the phone and begin the process of embarking on the referee pathway.

“I remember phoning Denis Collins, who was the Referee Administrator in Leinster at the time,” Correll explains. “The first step in any walk of life is often the hardest but knowing the structures and support were there for a young referee, this was my first port of call and I knew it was the right one.

“Within a couple of weeks, as part of the Leinster Referees pathway, I was given an opportunity when I was in the middle down in Merrion Road for a J3 game between Wanderers and the Royal College of Surgeons. Thankfully it went well and you just build layers of experience then. It’s like anything, you learn by doing and there’s no other way than to get out there, make your mistakes and learn from them.” 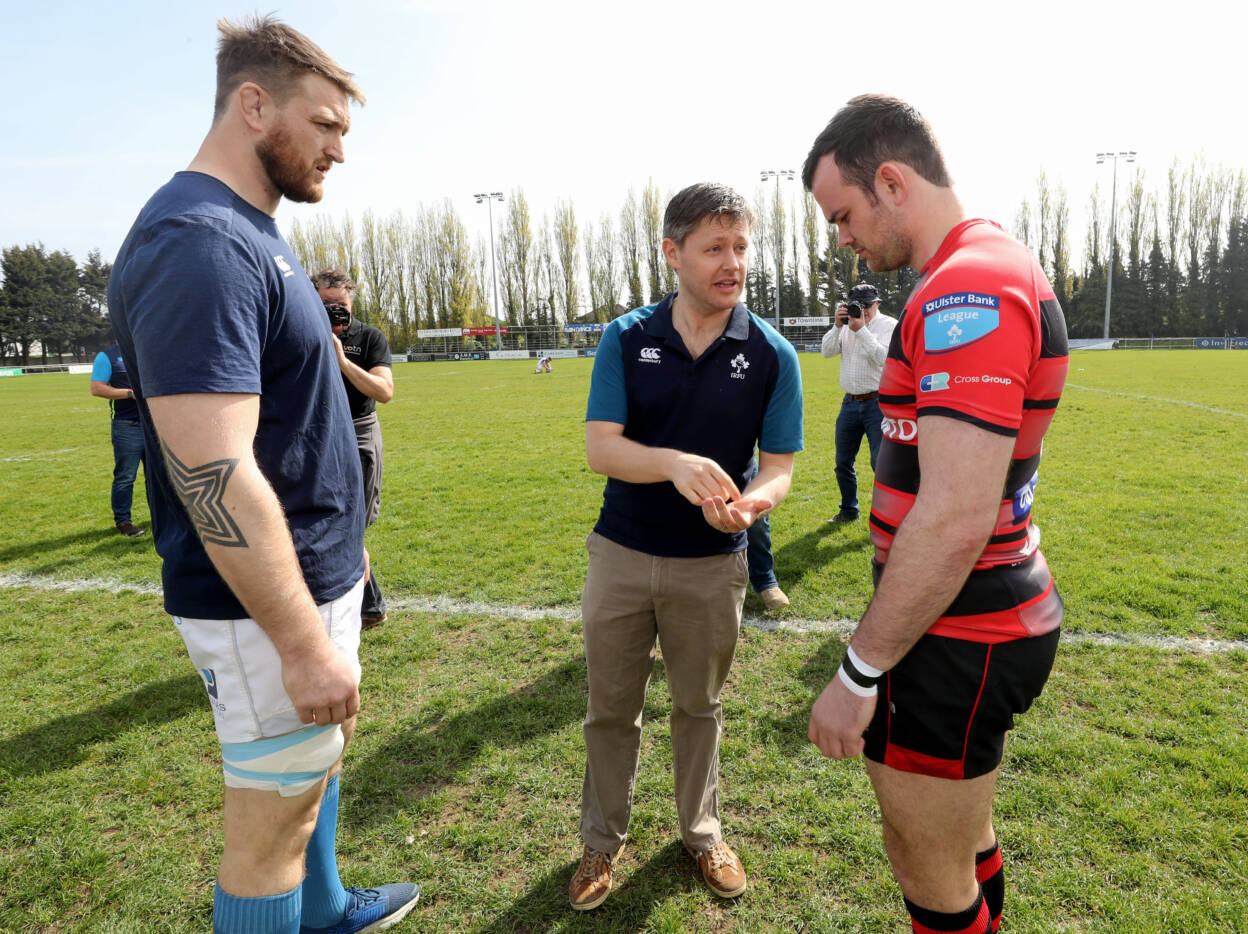 Having been identified as a young referee with potential for the IRFU National Panel, Correll – a lawyer by trade – earned a place on the Inter-Provincial Assessment Panel (IPAS), a major step on the ladder for any official in Ireland as you’re then appointed to fixtures outside your province and assessed by members of the other provincial referee associations.

From there, Correll progressed seamlessly through the grades, his final IPAS game – an AIL promotion showdown between Cashel RFC and Richmond RFC – a firm test of his credentials given what was at stake for both clubs, but one he passed successfully to achieve his initial ambition of becoming an All-Ireland League referee five years after making that first phone call.

“All along the way, the support I received was brilliant, both from the Leinster Branch and the IRFU, and I’ve no doubt the regular coaching, workshops and feedback accelerated my development,” the 37-year-old continues. “Right from the start, when you’re refereeing a J3 game to when you’re taking charge of a Division 1A game, there is always the right encouragement and assistance on hand to help you become a better referee and ultimately achieve your ambitions in the game.

Once on the IRFU National Panel, Correll’s career arc continued on an upward trajectory, his CV now furnished with some of the biggest fixtures in the domestic and schools game, including multiple Bateman Cup finals and the 2018 Leinster Senior Schools Cup decider between Belvedere College and Blackrock College at the RDS.

In Europe, Correll has officiated in the Rugby Europe Trophy, taking in countries such as Cyprus, Moldova and Sweden, and has been a regular on the touchline across Heineken Champions Cup, Challenge Cup and PRO14 competitions for the last eight seasons since making his assistant referee debut as part of a team of Irish officials alongside George Clancy and Barrie O’Connell for a crunch clash between Clermont Auvergne and Harlequins at the Stade Marcel Michelin in October 2013.

“I don’t think anything could have prepared me for that atmosphere,” he laughs. “That was a very special night in Clermont. The crowd and atmosphere was just phenomenal and it turned out to be a really good game of rugby between two powerful sides in Europe at the time. But for a referee, you always cherish the days you’re in the middle and I’ve been lucky to have been involved in some really great days down through the years.”

Asked to look back on his favourite games from a 14-year refereeing career to date, Correll instantly recalls last month’s Leinster Senior Schools Cup semi-final between Newbridge College and St Michael’s College at Energia Park as a standout one in his memory.

“As a team of officials, our aim is to try and facilitate a good game of rugby,” he says. “And in the case of the Newbridge-Michael’s game it was just a brilliantly entertaining game of rugby. You come off the pitch on those days and you just feel privileged to have been involved, whether it’s a schools game at Energia Park, an Under-18 inter-provincial in University of Limerick or a big Pro14 or Champions Cup game.” 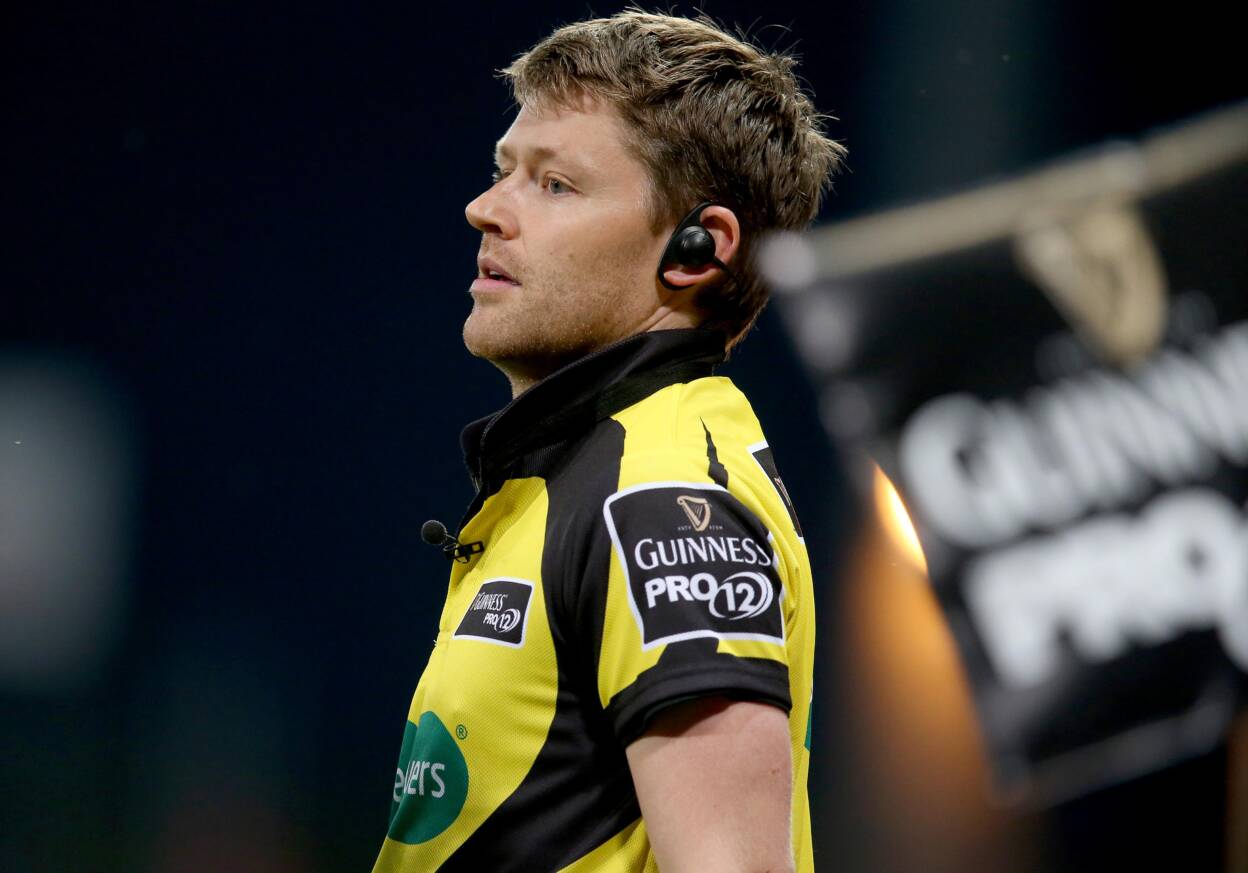 At all levels, referees provide a vital function in servicing the game and having come up through the pathway, Correll appreciates the work of the IRFU Referee Department, under the guidance, expertise and experience of Head of Referees Dudley Phillips and National Referee Manager David Wilkinson, in enabling, empowering and aiding the next generation of officials on their journey.

In addition to the IRFU’s range of courses and referee workshops run throughout the season, the IRFU Referee Development Managers across all four provinces play a vital role in facilitating those first steps, just as Denis Collins in Leinster did for Correll.

“The great thing about refereeing is there there is a level for everybody,” Correll explains. “Whether you want to help out in your local club or school, or have ambitions of becoming an AIL referee and potentially going beyond, the Referee Development Manager in each of the provinces want to hear from you. They’ll support you in every way possible and with Peter Fitzgibbon involved in Connacht, Sean Gallagher and Sam Holt in Leinster, Chris Harrington in Munster and Richard Kerr in Ulster, they’re great people to learn off and bounce things off. They know what it takes to climb the ladder and along with their teams, will provide you with all the tools you need.

“For example, Sean Gallagher, who is one of the IRFU’s high performance referees, has set up a coaching structure in Leinster where young and up and coming referees are identified at a very early stage and they’ll liaise and work directly with coaches throughout the season in a kind of mentor role. That ongoing development support is absolutely essential for any young or fledgling referee.”

Correll’s one piece of advice is to simply pick up the phone and explore the opportunities refereeing presents.

“You’ll find a level for yourself,” he adds. “The best thing I ever did was follow my interest. I’ve been refereeing alongside my professional career for most of adult life and I wouldn’t have had it any other way. I’ve been lucky to get so many opportunities down through the years and to have been involved in so many big games across Europe, I can look back on so many notable highlights whenever I do hang up the whistle.

“Being a referee has been incredibly rewarding and it has been a privilege to have had the best seat in the house for some memorable games down through the years so my one message would be to follow your ambitions, pick up the phone and make that first step sooner rather than later – who knows where it might take you.”

For more information on how you can become a referee, click here.

– Specsavers, The Official Optician and Audiologist of Irish Rugby