A dramatic end game left Ireland sweating over their place in the LA Sevens quarter-finals but the two points earned from a thrilling 19-19 draw with second seeds South Africa ensured Anthony Eddy‘s side advanced to the knockout stages of the fifth leg of the Men’s HSBC World Rugby Sevens Series.

This was a hugely impressive and composed performance from Ireland under Saturday night lights in Los Angeles as they dominated South Africa in nearly every facet and although the Blitzboks struck at the death to salvage a draw, Eddy’s side had ultimately done what they needed to do to progress to the last eight.

Jack Kelly was outstanding and his two tries either side of Jordan Conroy‘s 19th score of the season had put Ireland in a strong position to claim a major scalp in their final Pool B outing, but South Africa inflicted a bitter blow after the final hooter courtesy of Stedman Gans to go through as Pool winners.

Leading 19-7 after Kelly’s second of the night, Ireland were pegged back by Kurt-Lee Arendse down the right as his rampaging finish brought South Africa back to within seven points but the drama was still to come, as Terry Kennedy’s attempt to kick the ball dead as the clock hit zero misfired.

With just nine seconds remaining, Kennedy, who was earlier Ireland’s match-winner in their Pool opener against Canada, raced towards his own line to waste the final seconds but got his timing fractionally wrong and kicked the ball out for a South African five-metre lineout with one second left on the clock.

From there, the Blitzboks were clinical and Gans crashed over from close range for his second of the game to tie the scores up and send South Africa through to face host nation USA in Sunday’s quarter-finals, while Ireland will go head-to-head with Australia (10.05am local time/6.05am Irish time – live on Sky Sports Action). 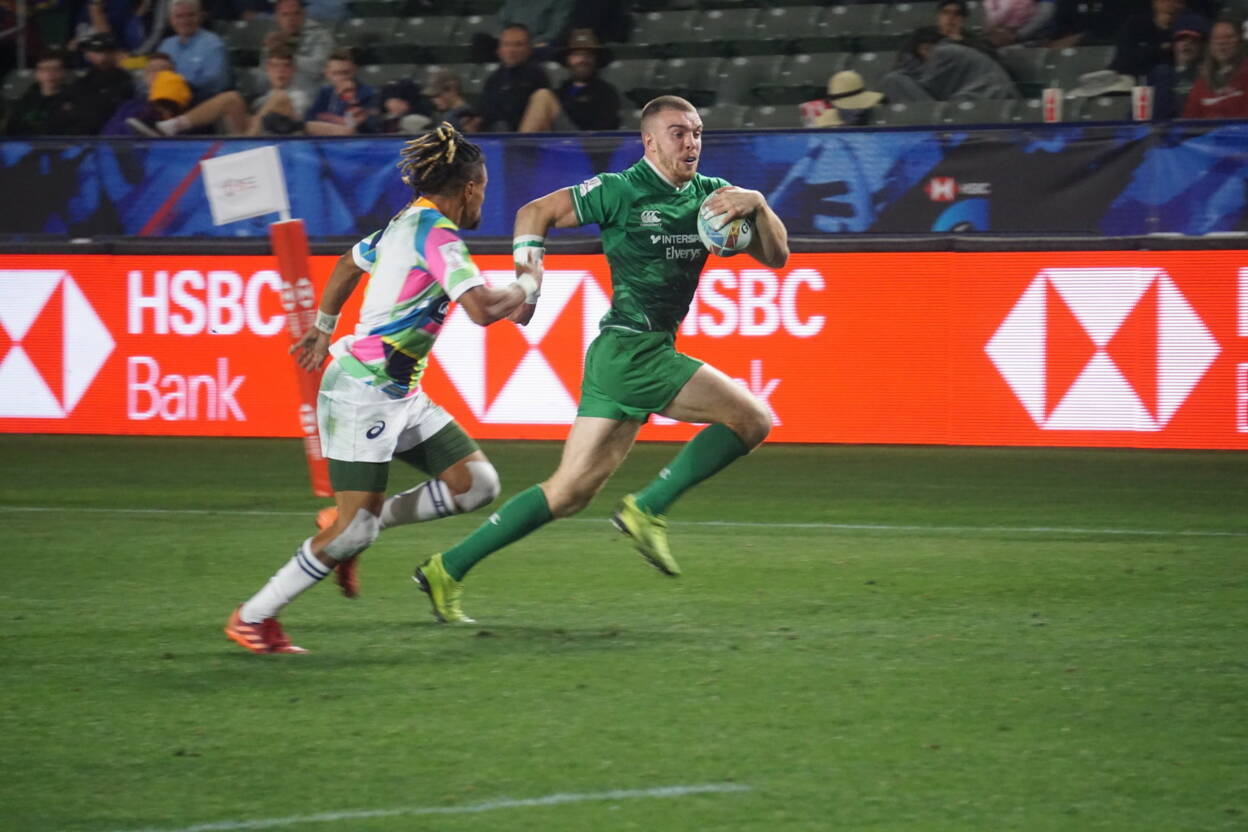 Although the initial emotion was disappointment for Eddy’s side, they ultimately did what they had to do to advance ahead of Canada and Kenya and the nature of the performance against a side of South Africa’s calibre will breed confidence heading into their quarter-final showdown against the Wallabies.

“It is disappointing to only come away with a draw as our performance deserved a win and it would have been a big scalp for us,” Billy Dardis told IrishRugby.ie afterwards. “Overall, it was pretty pleasing as we want to be in that top eight every week and it’s going to be a big one tomorrow against Australia.”

Knowing they needed a positive result to go through after a win and a defeat from their opening two Pool games, Kelly gave Ireland the perfect start against the Boks as he powered through inside the first minute, the former Ireland Under-20 captain showing all his strength and athleticism to fend off the attention of two South African defenders.

A sloppy restart handed South Africa an immediate route back into the contest as Werner Kok latched onto the loose ball to streak clear, before they recycled for Gans to go over for a second-minute seven-pointer.

Adam Leavy thought he had made Ireland’s first-half possession and territory count by displaying superb dexterity and spacial awareness to get the ball down in the corner under pressure from Selvyn Davids, but the referee and TMO decided that he was just in touch before grounding and the teams went into the break locked at 7-7.

Upon the resumption, Ireland wasted little time in reasserting themselves as Conroy solidified his position as the leading try-scorer on this year’s World Series, the winger cutting inside after being fed by Kennedy to accelerate and race clear.

It got even better for Ireland shortly after as Kelly’s hit and counter-ruck, aided by Kennedy and Harry McNulty, drove Chris Dry backwards and with the South African back on his own line, the ball squirted out for Kelly to apply downward pressure with his elbow for a 19-7 lead. 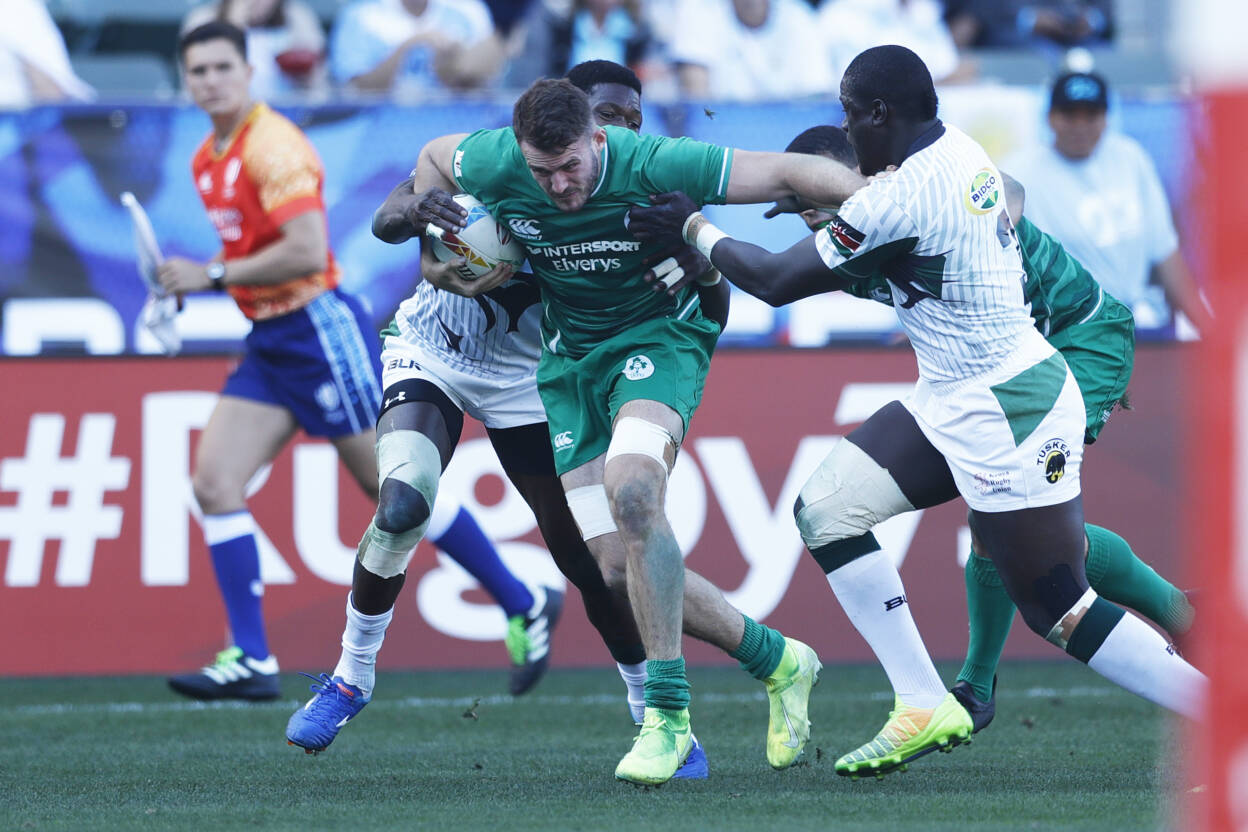 Sniffing a statement win, Ireland continued to defend ferociously and stoically but Arendse offered South Africa hope down the right before Gans snatched a draw for his side in the dying seconds.

“We were 5% off in the Kenya game but were on it for that game against South Africa,” Dardis, the Ireland captain, continued continued.

“It makes such a difference because we know when we play like that we can challenge anyway. It is pleasing and encouraging we can step up to the mark and dominate like that, but now we just have to finish it off. It’s a good confidence builder and hopefully we can carry momentum into the quarter-finals.”

Earlier on Saturday, Kennedy’s superb, match-winning try got Ireland up and running in their Pool B opener against Canada but their momentum was halted by a powerful Kenyan outfit.

Conroy and Greg O’Shea had earlier crossed against Canada before Kennedy emerged as the hero at the death by beating five defenders to score a sensational try in the corner after Ireland had trailed 12-7 at the break.

In their second Pool outing, Eddy’s side were punished by Kenya for an inaccurate performance but Ireland found a response and rebounded strongly to book their passage through to Sunday’s quarter-finals.