Empowered by their bonus point triumphs over Scotland and Wales, Ireland Women’s head coach Adam Griggs believes his squad are in a good place ahead of Sunday’s Six Nations showdown with England in Doncaster (kick-off 12.45pm).

In addition to the prospect of gaining just their third ever win over the Red Roses, there is also a Triple Crown in the offing for the Ciara Griffin-led outfit. England have held the upper hand in recent meetings and secured a Grand Slam last season with five convincing victories.

Griggs admitted that Ireland have to strike a balance between concentrating on themselves and the formidable challenge of their opponents, but is confident nevertheless in the abilities of his players.

“We made a point today (Friday) of moving on from what they can do. They will look to start fast and put you under pressure. We have to be able to weather that,” he acknowledged, speaking at a media day at the IRFU High Performance Centre.

“Once you get over that start, every team has their purple patch. It is about knuckling down and going to work on your systems and what you do well. We’re coming off two wins. We’ve played really good rugby.

“Just because the opposition is the second-best team in the world and the current holders of the Six Nations, it doesn’t mean that we should alter our game too much. It’s what has got us success over the last couple of weeks.

“We respect what England have done and how they can put you under pressure. We will stick to our systems and processes and, hopefully, that puts them under pressure that they haven’t had before.”

This will serve as a litmus test of where Ireland stand on the global stage, particularly with the 2021 Rugby World Cup qualifiers on the horizon later in the year. The likes of England and his native New Zealand have set the standards for others to follow, and Griggs hopes they can leave it all out there tomorrow on the Castle Park pitch.

“We’ve got a theme this week in challenging ourselves to be world class. I said it to the group when we came together last night that people can talk about being world class all they like, but they don’t always get the chance to go up against an opposition who is world class.

“England have been there and they’ve proven it before. This is really where we’re going to judge ourselves. It’s great that we’ve had two wins and plenty of learning from those victories, but at the same time this is a team that you want to go and beat.

“The team that you want to compete against. Really earn the respect of their peers and who they’re playing against. We’re looking forward to it and we really, genuinely, have nothing to lose. We’ve got a couple of wins, playing some good rugby. They’ll be tough opposition for sure, but what’s there for us to lose?” 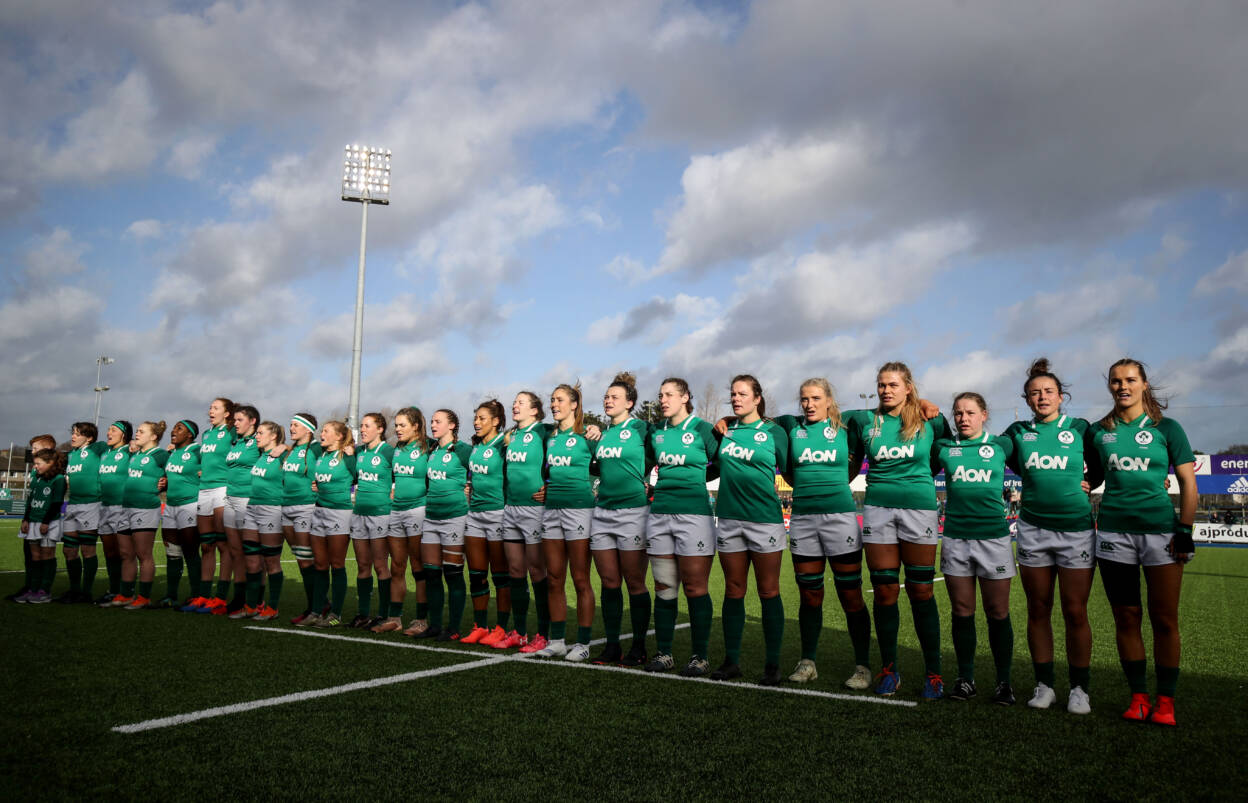 Griggs has made two changes to his team from the Welsh game, with Aoife Doyle and current Ireland Sevens international Katie Fitzhenry coming in for Beibhinn Parsons and Michelle Claffey respectively, in the back-line.

Following a five-year absence, Doyle returned to 15s international rugby earlier this month against Scotland and also appeared off the bench in the Welsh game. Parsons, who crossed twice during the opening two rounds, will miss the remainder of the tournament to concentrate on her impending Leaving Certificate exams.

Like Doyle, Fitzhenry has played on the HSBC World Rugby Women’s Sevens Series circuit in recent seasons. The Wexford native has previously featured alongside Sene Naoupu in the Irish midfield and, as a result, Griggs had no hesitation in bringing her straight back into the mix.

“Katie has come back from the Hamilton and Sydney Sevens tournaments and trained with us over the last three weeks as well as before she went. At this time, we’re looking to give her an opportunity to see what she can do against England.

“She knows them quite well. Even in my first year with the group (in 2018), Katie was part of the starting centre partnership with Sene. It is good to reunite them and see how they go this weekend.” 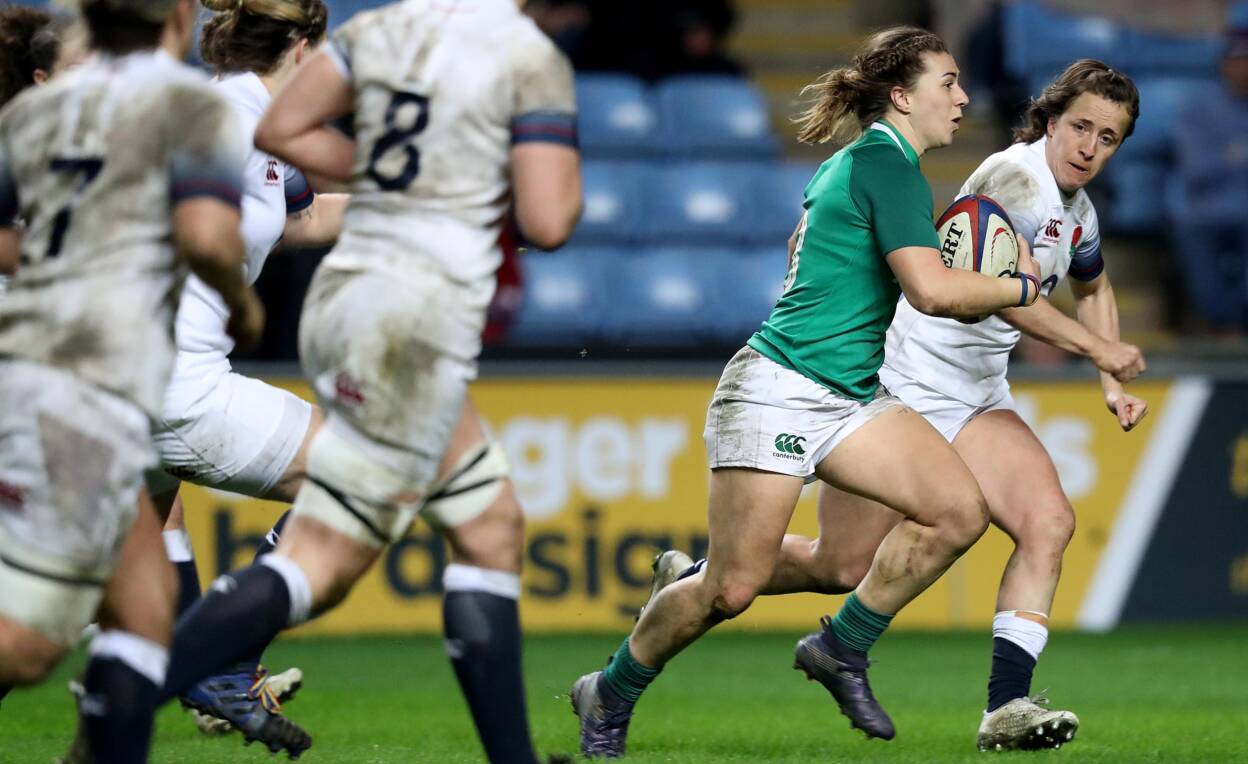 While the absence out wide of talented teenager Parsons could be keenly felt, Griggs revealed that there was already a plan in place for her to step away after the first two rounds with her University ambitions making it difficult to combine both aspects of her life.

“We sat down with Beibhinn in December, with her parents as well, and mapped out a plan for her. It’s not enough that she’s just doing her Leaving Cert, she wants to go into medicine. We always knew that was going to be something,” he explained.

“If she wants the marks to get into medicine, she really needs to focus on it. We looked at it. Even through the month of January, we managed her. She wasn’t in every day of each camp. We made sure she had time to study.

“We’ve always been aware of it and I think it’s probably the best thing for her. She’s had two great weeks and it’s probably a great thing to walk away on a high for the rest of this (Six Nations) now. Also really make sure she can do well in that area of her life.”

Including replacement prop Leah Lyons, Ireland have five English-based players in their matchday squad for the third round fixture. Lyons and fellow Cork woman Anna Caplice currently play for London club Harlequins, who have seven representatives in the England 23.

Griggs feels his overseas quintet have benefited from regular exposure to the Tyrrells Premier 15s, adding: “They know those girls quite well. Playing and training with them week in, week out at the clubs is good for us. I think there is no doubt our girls playing over there in that competition has stepped up their game too.”