Steve McGinnis says 'the progression has been really, really good' as the Ireland Women's squad built towards the start of the Women's Six Nations Championship ©INPHO/Dan Sheridan

The past seven months have seen Ireland Women’s forwards coach Steve McGinnis taking his career in an entirely new direction.

Having volunteered with the Irish Exiles system for several years while working as a teacher in England, McGinnis signed up full-time with the IQ Rugby programme last July. At roughly the same time, he was brought into Adam Griggs’ coaching set-up ahead of the Ireland’s November Test against Wales.

Although McGinnis is tasked with identifying male and female players situated abroad, his role holds particular significance for the latter. Whereas their male counterparts are spread across the four provinces, six of today’s squad for the Women’s Six Nations opener against Scotland are based in England.

Additionally, Cliodhna Moloney and Edel McMahon currently play for Wasps in the English capital. McGinnis has kept in close contact with these players throughout the season, but is also aware of others who could potentially wear the green jersey in the near future. 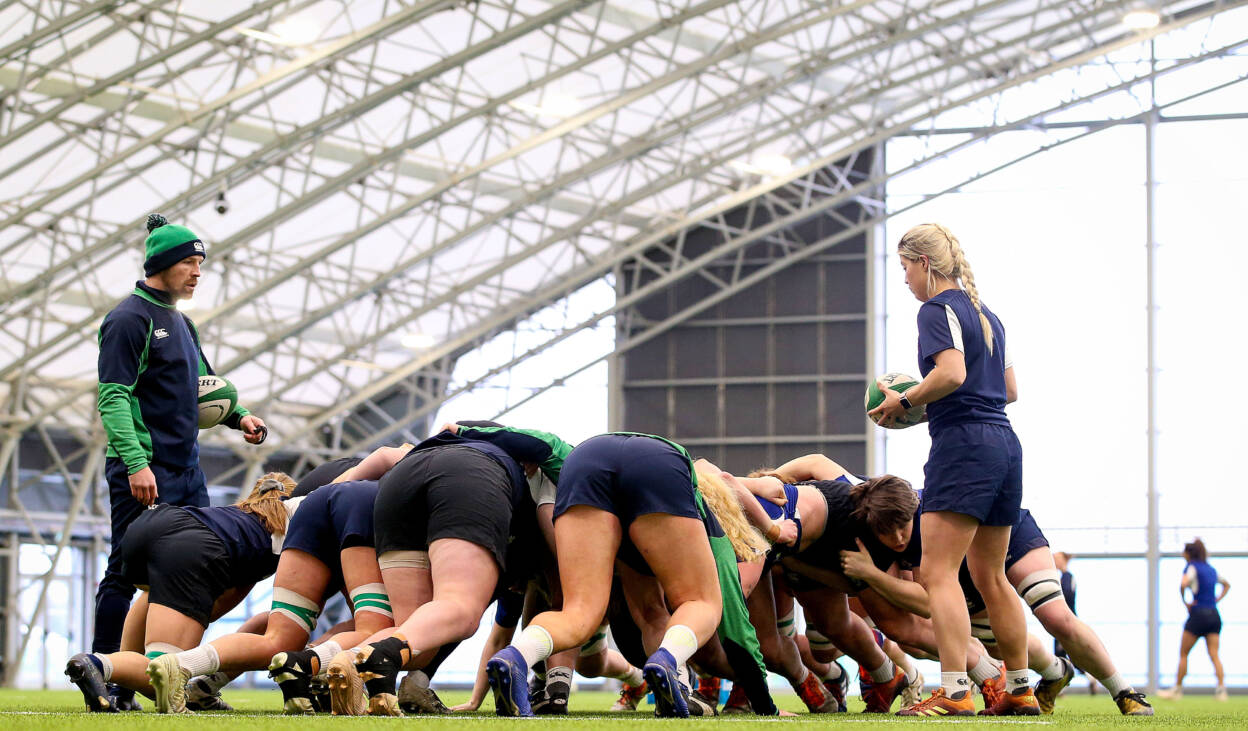 “There’s a few girls on the fringes that we’re obviously in contact with,” he acknowledged. “We’re finding more and more girls to hopefully come forward and make themselves known. First of all to the programmes, then we can track them and find them. Like anyone across the water, it’s about feeling that connection.

“Hopefully my role can really bridge that gap. Make sure that they do feel connected and feel supported. I feel there is a real opportunity and a real pathway to progress from overseas into an Ireland set-up.

“For us, it is just about finding the talent and you don’t necessarily need to be playing at that level to be a talented rugby player. It’s about sometimes providing that opportunity for them and providing that pathway for them.”

As the likes of Lyons, Aoife McDermott and Ciara Cooney return to full fitness after lengthy injury-enforced periods on the sidelines, Griggs and his coaching team have had to contend with the absence this week of Munster duo Eimear Considine and Enya Breen through injury.

Nonetheless, McGinnis is keen to accentuate the positives ahead of their opening game of 2020. Following her involvement with the IRFU Sevens programme for a number of seasons, Aoife Doyle returns to Ireland’s back-three for the first time since 2015.

In addition, following her cameo appearance in the autumn defeat at home to Wales, Michelle Claffey reunites with her Leinster team-mate Sene Naoupu in a familiar centre pairing.

“It’s a chance for those players to step in and stake their claim for that starting spot. Obviously we’re disappointed the two girls can’t play, but we’re really confident in the squad we have. We’ve got 36 competitive girls in there. The way they’ve trained, any one of them could be in that starting position.

“We had a really difficult time selecting even the squad, never mind the starting 15 for this game. Hopefully the girls that are coming in are going to do just as good a job. They got the first bite of the cherry to stake their claim for the next game.”

When Ireland last met Scotland – during the 2019 Women’s Six Nations at Scotstoun Stadium – they emerged as 22-5 bonus point winners. Eleven months earlier, the visitors had broken a long period of Irish dominance in this fixture courtesy of a 15-12 success at Energia Park. 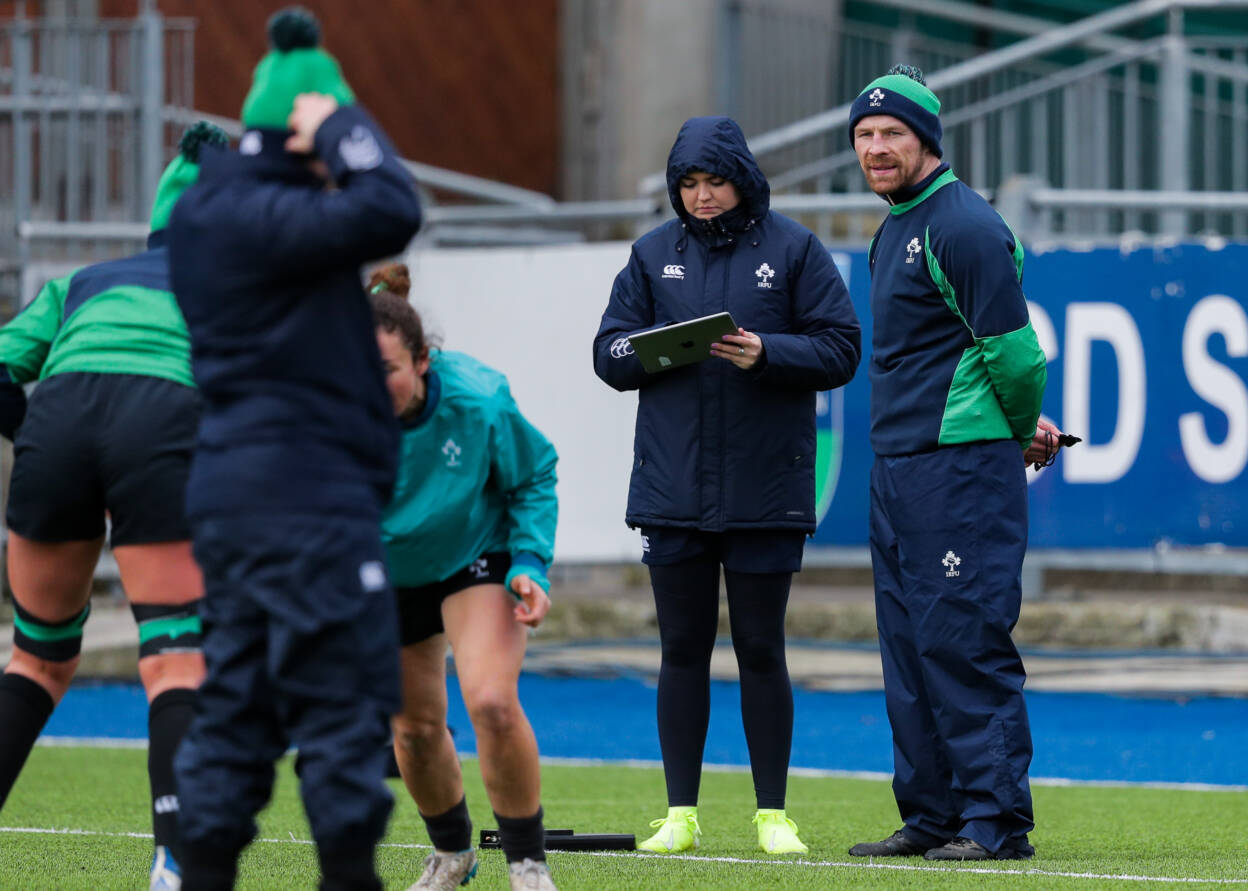 Now coached by former Ireland supremo Philip Doyle, Scotland have fallen to six successive Six Nations losses since that day in Donnybrook. Yet regardless of what form they are in, McGinnis is expecting a strong showing from the Scots in Doyle’s first Six Nations match at the helm.

“For us, it’s all about focusing on us and our performance. It’s the opening game of the Six Nations, so both teams are out to win. They’re not going to come over here and roll over.

Since moving to Energia Park back n 2016, the profile of the Ireland Women’s team had steadily increased year-on-year. A record crowd of 6,047 for a standalone Women’s fixture crammed into the Dublin 4 ground for their last Six Nations home fixture – a fourth round defeat to France last March.

Another big attendance is anticipated for this afternoon, and McGinnis feels this could give the squad an extra push as they look to hit the ground running in this year’s Championship.

“Having that opening game as a home game makes a massive difference. Having three home games across the tournament will hopefully give us a really good advantage. The crowd is a massive influence on this group.

“We just had our family day last weekend, that obviously highlights the support and the background for these players out there. We’re looking forward to Sunday in Donnybrook and hopefully getting a few more down,” he added.