It was an unforgiving opening day for both the Ireland Men’s and Women’s Sevens teams at the Sydney Sevens on Saturday, as temperatures soared to a stifling 45 degrees celsius inside the Bankwest Stadium.

Anthony Eddy‘s Ireland Men were left disappointed and frustrated after suffering Pool defeats to Canada and England on day one, while Ireland Women, who were on the wrong end of heavy losses to France and then hosts Australia, are desperately searching for a spark to ignite their season.

Once again, Ireland Men pushed Canada all the way in their Pool D opener having traded blows with the same opponents in Hamilton last week but, just as it was in New Zealand, the Canadians finished strongly to record a 28-19 victory despite tries from Harry McNulty, Jordan Conroy and John O’Donnell.

In their second game of the day, Eddy’s charges led England through Billy Dardis’ first-half try but were made to pay as Dan Norton‘s second-half double handed his side a 19-12 victory under the lights and cooling temperatures in Sydney, causing more frustration for Ireland who had their opportunities to record a significant win.

As it is, Ireland Men sit bottom of Pool D with two points ahead of Sunday’s final outing against Spain – who stunned Canada on Saturday – at 12.35pm local time/1.35am Irish time.

Despite the regret of two narrow losses, and in particular the way in which Eddy’s Men had put themselves in strong positions to kick on and win games only for a couple of key moments to lead to their downfall, there were further encouraging strands to Ireland’s performances against Canada and England.

In extreme temperatures, McNulty’s surging breakaway try handed Ireland the lead against Canada and although Andrew Coe‘s score at the other end cancelled it out, Conroy intercepted to race clear to re-establish Ireland’s scoreboard advantage.

The two teams traded tries either side of the break as Nathan Hirayama and O’Donnell crossed at either end, before the Canadians found an extra gear to pull clear through David Richard and Harry Jones, with Hirayama converting all four.

With a large Irish crowd behind them, Ireland started strongly against England in the evening session in Sydney as Dardis’ seven-pointer was just reward for their dominance of the opening exchanges, but Ben Harris levelled the contest just before the break. 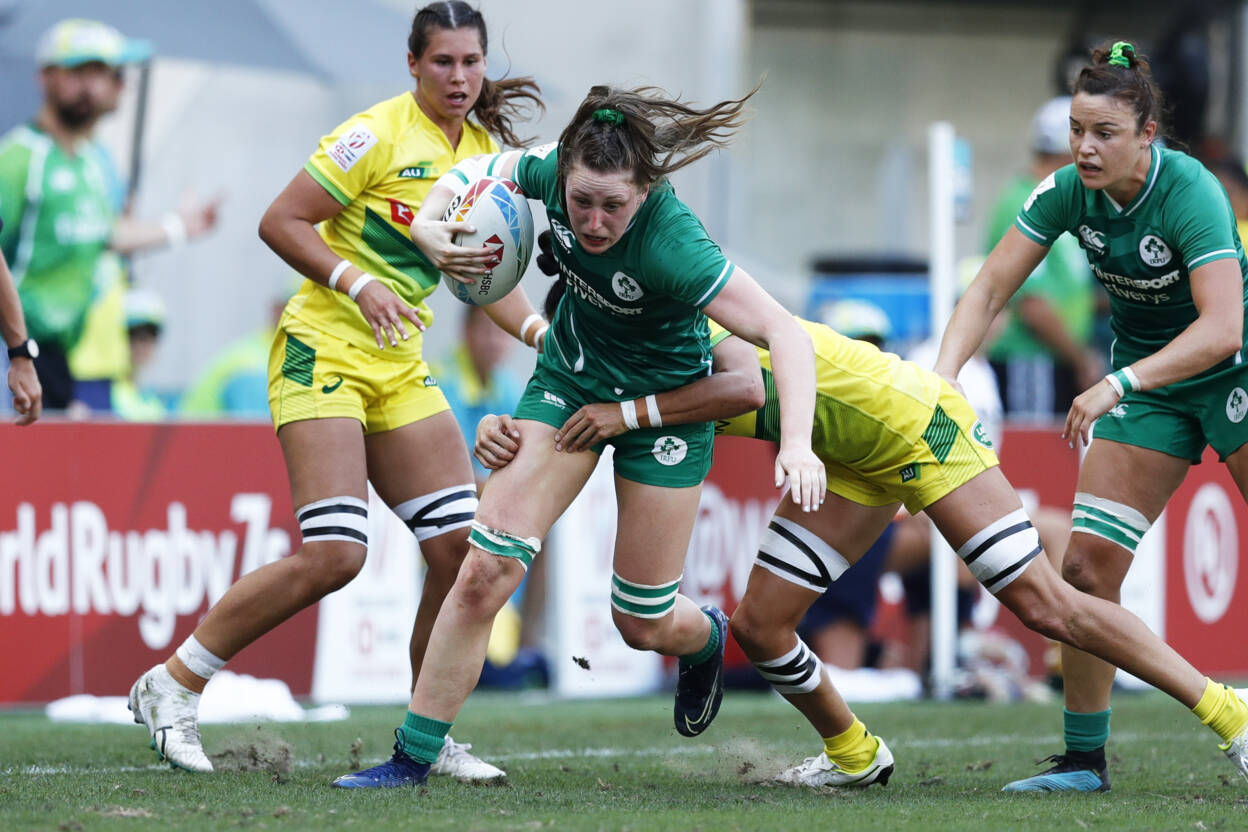 Having enjoyed sustained periods of possession in the first period, Ireland had nothing to show for it on the scoreboard and they were hit by a quickfire Norton double, who demonstrated his clinical finishing ability to take the game away from Eddy’s side and even Kennedy’s late try was nothing more than a consolation.

Ireland will need to pick themselves back up and refocus on the next job ahead against Spain on Sunday morning, with crucial HSBC World Rugby Sevens Series points on offer through the ranking Play-offs later on day two.

Ireland Women, meanwhile, endured another difficult day as they toiled in the heat and leaked 12 tries in Pool C reversals to familiar foes France and a rampant Australia, who had the returning Charlotte Caslick in prolific form.

Amee-Leigh Murphy Crowe brought her World Series try-scoring tally to 96 with a brace of scores either side of half-time against France but Stan McDowell‘s side had already conceded four at the other end at that stage, before the French finished with another flourish to record an emphatic 40-14 win.

Caslick then inflicted further pain on Ireland as she scored three of Australia’s six in the afternoon match, with the host nation surging towards semi-final qualification courtesy of a 34-0 win, leaving McDowell’s side third in Pool C ahead of their Sunday showdown against Spain at 10.13am local time/11.13am Irish time -1.

The Sydney Sevens pool stages conclude on Sunday after which the four pool winners will progress straight to the Cup semi-finals, while the other teams will go into Play-offs to determine the rankings from fifth to 12th.