IRFU referees will be involved in a host of different fixtures over the festive period but it is the involvement in the Guinness PRO14 Interpro derbies that take centre stage.
On Friday night George Clancy will be on duty as Leinster host Ulster at the RDS with Frank Murphy and Kieran Barry in AR support.  The following day Andy Brace will be in the Sportsgrounds as Connacht welcome Munster.  Sean Gallagher and Paul Haycock will be supporting from the touchlines.
The following week as the players look to digest the Christmas break and head into another round of provincial derbies Sean Gallagher will have the whistle as Connacht travel to the Kingspan Stadium.  In AR support will be Andy Brace and Nigel Correll. 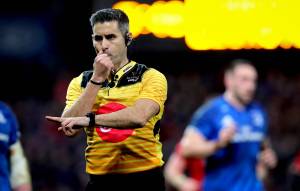 Frank Murphy has been tasked with officiating the Munster v Leinster game at Thomond Park on Saturday 28th December.  George Clancy and Chris Busby will fill the AR roles.  Also on that day Joy Neville will be in Twickenham to referee the game between Harlequins Women and Leinster Women in another first for the female code.
The final round of interpro fixtures in the first few days of January sees the Irish officials’ hegemony broken as Welsh ref Dan Jones claims the whistle for the Ulster v Munster game in Belfast.  Sean Gallagher will provide AR support for that game.  On Saturday 4th January Scottish referee Mike Adamson is the man in the middle for Connacht’s trip to the RDS.
Other IRFU referees on duty in Round 10 of the Guinness PRO14 include Frank Murphy (Cardiff v Scarlets), Andy Brace (Dragons v Ospreys) and Joy Neville (Edinburgh v Southern Kings)