Sitting in the foyer of the team hotel in Cape Town, a short walk from the city’s cultural Waterfront, Kathy Baker escapes the madness and excitement of tournament week to take stock. In between a pitch session, lunch and an afternoon massage, the 21-year-old sits back, smiles and wonders how she finds herself in this position.

On Friday afternoon, Baker will win her 13th Ireland Sevens cap as Stan McDowell‘s side open the third leg of the HSBC World Rugby Women’s Sevens Series against USA (2.22pm local time, 12.22pm Irish time), as the second part of this December double-header kicks off.

Baker, as her performances last weekend in Dubai underlined, has become a key member of the Ireland Women’s side and even amid the disappointment of a 10th-place finish at The Sevens Stadium, the Meath native was the deserving winner of the Players’ Player of the Tournament award, as voted for by her team-mates.

Having made her World Series debut in Japan in 2018, Baker’s stock has risen considerably in a short space of time and her development into a dynamic and hard-working forward is testament to the Ireland Sevens pathway, after she was first scouted playing for The King’s Hospital at the IRFU X7s tournament.

“I played pretty much all sports growing up but my main one was hockey,” Baker tells IrishRugby.ie. “Sport has always been a big part of my life and I’ve always had that drive to get into professional sport, but I wasn’t always sure of how I was going to do it.

“In Fifth Year, a Sevens team started in my school and it has gone from there.”

Hockey remained a priority for Baker, who in addition to representing her school was also playing for North Kildare Hockey Club, but one of her coaches, Rowland Rixon-Fuller, ensured she was given the chance to combine both sports. 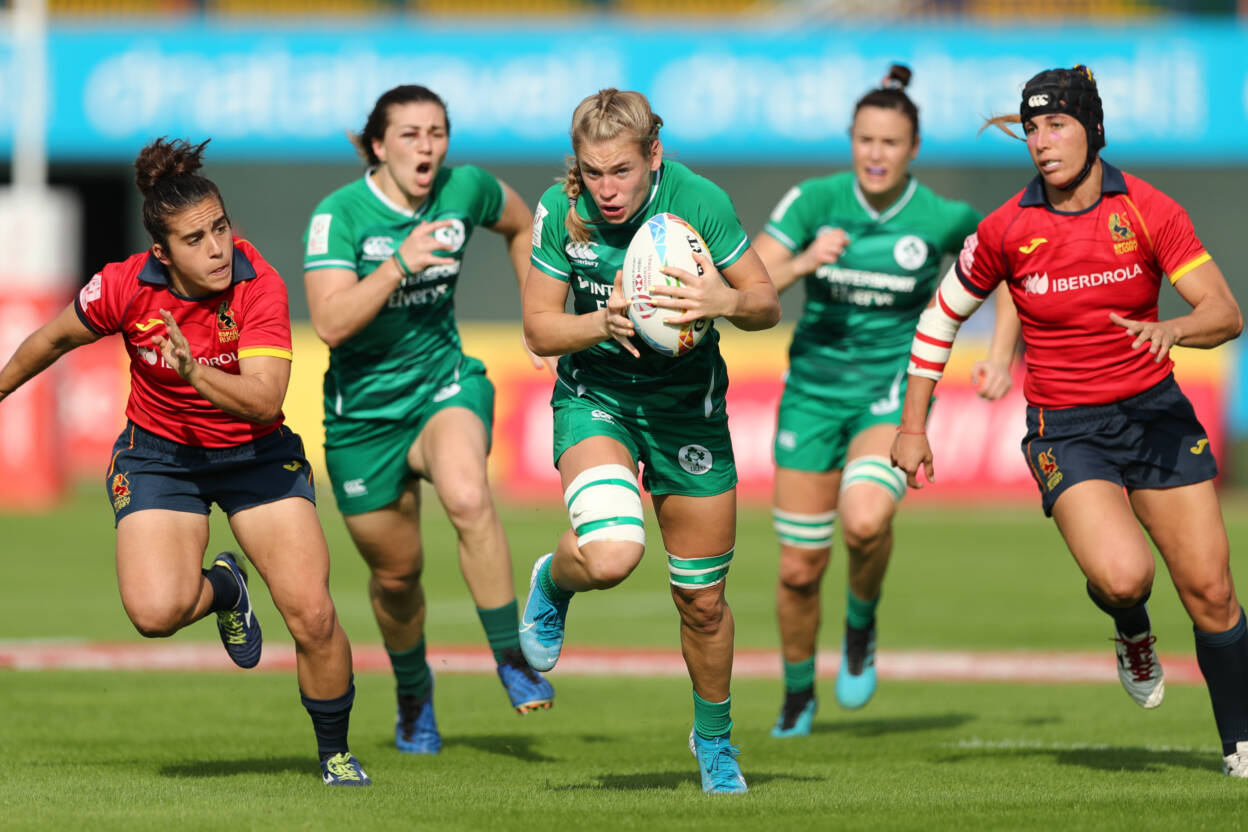 “My coaches were very good about it,” she explains. “I was playing fairly high up in the [hockey] club but my coach was all for taking my chances with rugby. It was so good to know that he’d allow me to miss training and I could still play hockey at the weekend, just to give rugby a complete shot.

“To this day he is very proud.”

It wasn’t long before Baker earned international recognition as part of the Ireland Under-18 Girls Sevens squad for the Rugby Europe Under-18 Women’s Sevens Championship back in September 2016, a side that also included the likes of Katie Heffernan, Brittany Hogan, Emily Lane and Claire Boles.

In pulling on the green jersey, Baker, who is currently studying Strength and Conditioning in Setanta College, became the the first senior female rugby international from The King’s Hospital as she made her World Series debut at the Kitakyushu 7s.

“My Dad loves rugby but as he said, he never thought he’d have one of us playing,” she laughs. “It has been crazy and I honestly don’t know how I got here but I’m happy that I did. It’s surreal to be here and playing for Ireland.

Everyone I have met along the way has been amazing and our team has really gelled over the last two years. I feel like I’m really part of it now.

Baker will again be integral for Ireland at the Cape Town Stadium this weekend as McDowell’s side look to raise their performances levels for the Pool C clashes against USA on Friday and then Australia and England on Saturday.

“We’ve a lot to prove to ourselves and after last weekend we were all really disappointed so that’s just our main focus, to get the whole team to produce a good performance,” Baker adds.

All the action from Cape Town is live on Sky Sports Action and you can follow Ireland’s progress across the IRFU social media channels using #Ireland7s.