Eve Higgins will be in action for Ireland at the Dubai Sevens next week. ©INPHO/Bryan Keane

As she prepares for the second leg of the HSBC World Rugby Women’s Sevens Series in Dubai next week, Eve Higgins has acknowledged the Ireland Sevens squads are reaping the benefits of the new IRFU High Performance Centre.

Previously based at the union’s Sevens headquarters on Lansdowne Road, Higgins and her team-mates relocated to the Sport Ireland Campus in Blanchardstown at the end of June. They are joined by the Ireland Men’s Sevens squad, who will also be travelling to Dubai on Sunday for their debut tournament as a core team on the World Series circuit.

With state-of-the-art facilities on site, including three outdoor pitches, a three-quarter length indoor pitch and medical rooms, the IRFU has invested heavily in the Sevens programme and no stone has been left unturned as attention turns to the December double-header in Dubai and Cape Town.

“I think with pitch sessions we have progressed, but I don’t know if that’s down to the setting. We’ve changed our trainings from a year ago. You’re always feeding new things in, but definitely the indoor pitch gives us a chance [to do more],” Higgins said.

“Before the gym we’ve put in extra skills sessions. We can hop inside with our boots, do some passing drills, some kicking and catching drills. Then whip the boots off, put our trainers on and go into the gym. Those little extra half an hour sessions that we’re getting in, we haven’t had that before. That’s really feeding into getting quality on to the pitch.

“It’s great here because if it is raining, we can just train inside and not think about it. The pitch gets really warm too when we’re all training on it. You really feel it, so that’s like good warm weather training ahead of tournaments.”

Unlike the Ireland Men’s Sevens, Stan McDowell‘s Women’s side have been a full World Series member since finishing second to Japan in a qualifier tournament at UCD in 2015. Previous to that, they had spent a season on the circuit as a result of their quarter-final placing at the 2013 World Cup Sevens.

Their latest World Series odyssey began at Glendale, Colorado in early October when McDowell’s side achieved an eighth-place finish. The 28-7 pool triumph over Brazil was the highlight of a tournament that saw them facing reigning champions New Zealand at the quarter-final stage. 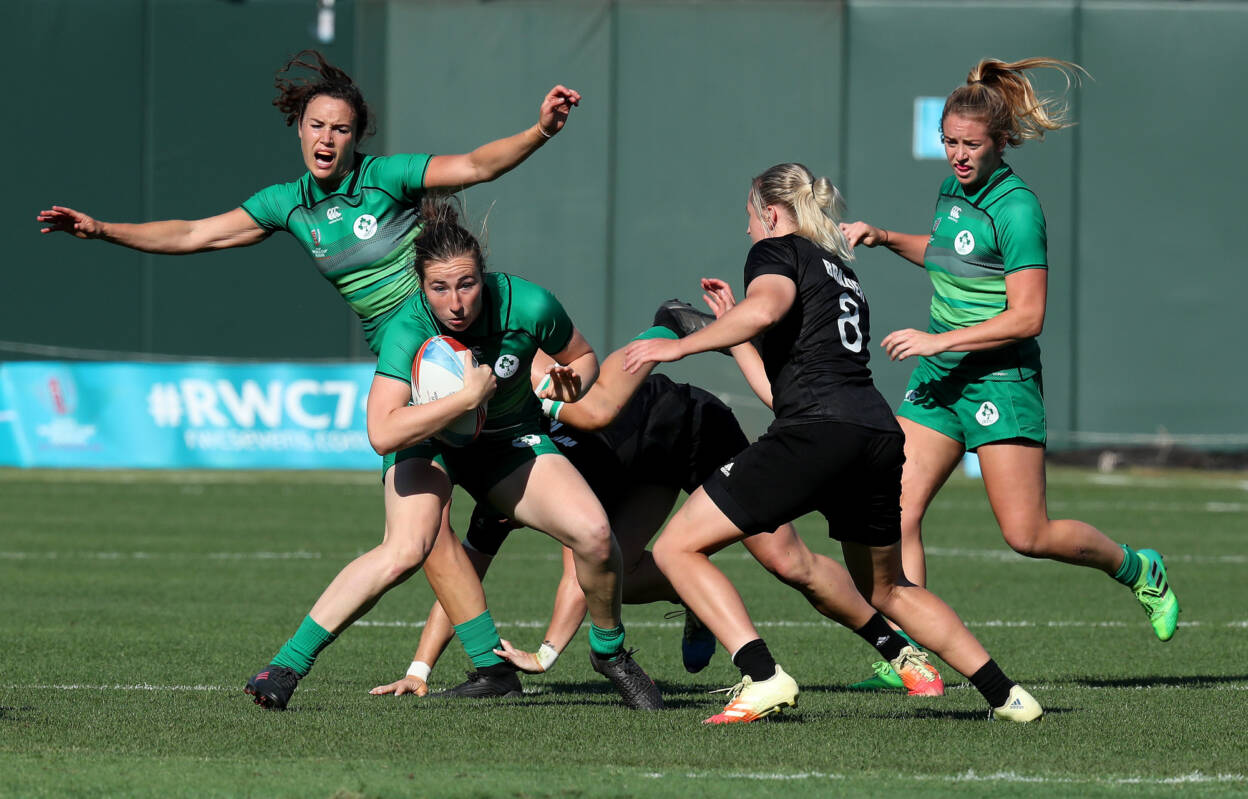 Higgins was instrumental in the Brazilian success, amassing a nine-point haul to supplement tries from Amee-Leigh Murphy Crowe, Emily Lane and Anna Doyle. Nonetheless, the Lucan native believes her performance, and that of the squad, will need to be significantly better for Dubai next week than it was in the US city.

“We just want to improve from Colorado. We didn’t feel like we performed as well as we can, and Dubai is a great opportunity to show what we can do. I want to be better than I was in Colorado, and better than I’ve been in the past.

“I want to be a more consistent player, but I feel like I can improve so much from Colorado. I think it’s just about not focusing on all the things. Trying to just focus on little things, picking something every week to focus on rather than picking everything.”

Since then, the Ireland Women’s Sevens earned fourth spot at the RugbyX tournament in London and recently enjoyed a productive weekend at the annual Elche 7s tournament, eventually losing out to France in the final.

Morale remains high within the group and Higgins stressed the importance of having the squad together as one in their Blanchardstown base.

It’s great that we can all be here for the day. Then as soon as we’re done we leave, but we’ve had everything here. We have our food, we can train, use the gym. It’s great to have it all in the one place. It takes time from commuting. We’re just here and we have our schedule, so it’s easy to follow.

Still only 20, Higgins has made a rapid rise to the senior ranks of Irish rugby in recent years. Having first shone as an underage star at nearby MU Barnhall, Higgins later signed for south Dublin outfit Railway Union, who are the reigning champions of the Women’s All-Ireland League.

Although she is yet to pick up a XVs international cap, Higgins was part of the training squad for the home-based Women’s World Cup in 2017. She featured at the World Cup Sevens in San Francisco last year and has gone on to become a virtual ever-present in the squad, winning 16 caps and scoring 20 World Series tries.

All the while, the prodigious back combines rugby with college commitments in UCD, where she studies history and sociology. It can be difficult to strike a balance between the two but her reluctance to take a year out of the course means Higgins has discovered a way to make it work. 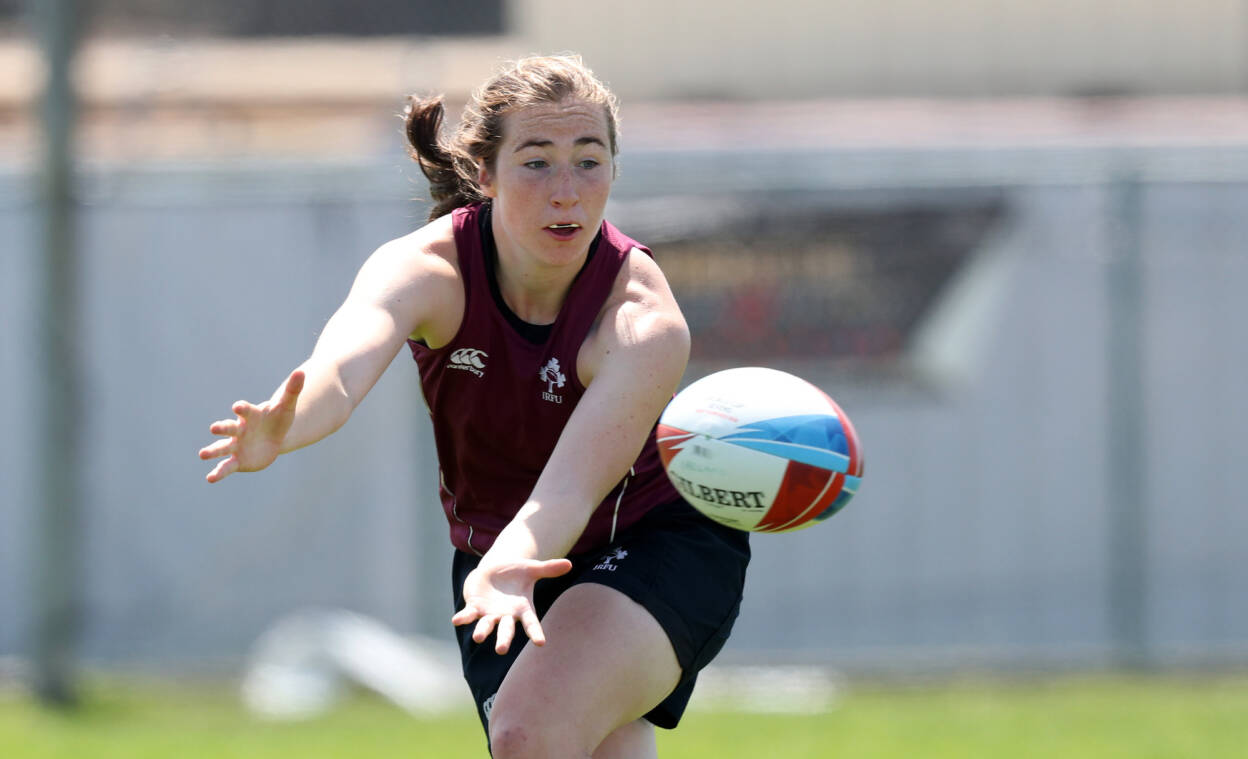 “I did history for the Leaving Cert but I’ve been interested in criminology. That’s something I want to do in the future in UCD, but you do that as a Masters. With history and sociology, I picked it with a mind to training here. A lot of the time you’re on learnings outside of college, which is the reading and those aspects – which suits flying and stuff like that,” she explained.

“I’ve gone part time for my final year now, so this semester consisted of a Monday morning and Tuesday morning, a full day on Wednesday and then I was done for the week so it’s been good having that balance. Even before then it was just about keeping my head down and not leaving everything to the last minute. Staying on top of things.

“I was very conscious of not taking a year out. I wanted to get straight into things. I had started training here with the girls when I was still in school, so I had a year of going once or twice in the week into training. It’s something I really wanted to do, to go straight into college and see. Then if it wasn’t working out I’d take a year out, but I wanted to really try it. It’s been working out since.”

For now, Higgins will place all her focus on next week’s trip to Dubai.

Ireland Women open the tournament with a Pool B encounter against Spain on Thursday (2.50pm local time/10.50am Irish time). Meetings with Australia and Fiji follow on Friday in advance of the play-offs and finals on Saturday.