The Ireland Under-18s finished as Pool C runners-up on the opening day of the Rugby Europe U-18 Women’s Sevens Championship in Jarocin, Poland.

Ben Martin’s young side will face England in tomorrow’s Cup quarter-finals (12.04pm local time/11.04am Irish time). They ran out convincing winners over both Georgia (52-0) and Latvia (34-5) before losing the pool decider to a strong Scotland team (24-12).

Listowel’s Meabh McElligott led the scoring with four tries, just ahead of captain Beibhinn Parsons who touched down in each game. Gorey out-half Kate Farrell McCabe chipped in with a brace in the opener against Georgia and landed seven conversions for a 24-point haul.

Ireland took the lead against Georgia inside two minutes, Caoimhe O’Callaghan passing from a scrum for Farrell McCabe to step inside the covering defender and raid in from the right wing. Parsons and Mya Alcorn both evaded a couple of tackles to quickly push Ireland’s lead out to 19 points.

Two more converted tries followed before half-time, with Farrell McCabe slicing in between two defenders to double her try tally, and she then lobbed a pass out for the pacy McElligott to gallop over from the Georgian 10-metre line. 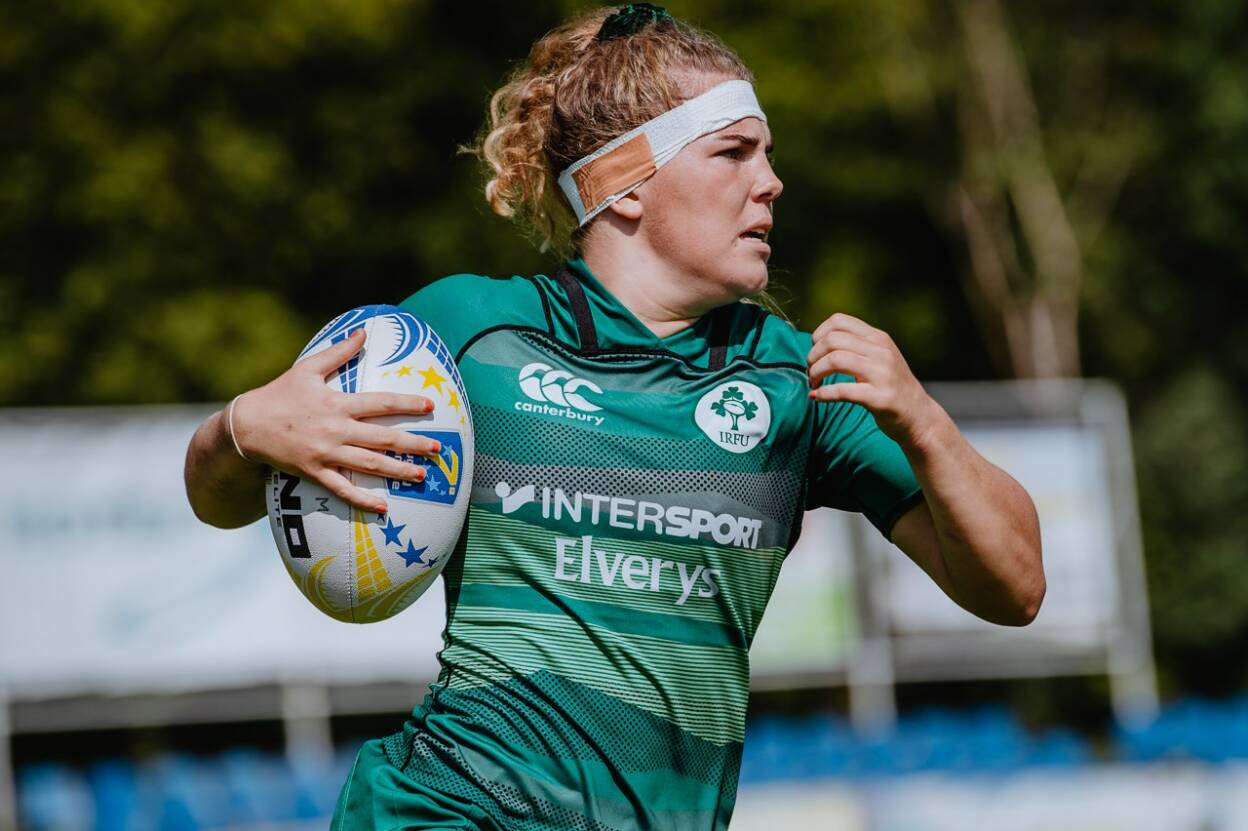 Replacement Amanda McQuade scored straight from the restart, dashing clear from halfway after good work from Parsons and Lucy Turkington freed her up. Turkington converted and also added the extras to a fine score from McElligott, who used a strong hand-off and burst of pace on a 60-metre run-in.

Unfortunately an injury to Dungannon talent Turkington forced her off. Having done brilliantly to rip the ball away in a tackle. she injured herself in the process of sending fellow replacement Chisom Ugwueru away to score Ireland’s eighth and final try.

Munster flyer McElligott showed her pace and power again to open the scoring against Latvia, and followed up with an even better try from inside the Irish 22, with fellow speedster Parsons providing the assist and her trailing support if a return pass was needed.

Leah Reilly’s sin-binning for a high tackle invited Latvia forward and Krista Vitola’s well-taken try reduced the arrears to 12-5 by half-time. But Ireland went up a gear or two on the resumption, with scrum half O’Callaghan scampering clear of two defenders to score from her own 22.

O’Callaghan used turnover ball to release Ugwueru who expertly cut inside the final defender to score. Despite Parsons seeing yellow, newcomer India Daley picked off a great turnover and fed fellow replacement Alcorn for a breathless breakaway score. Parsons added the sixth try down the short side of a scrum. 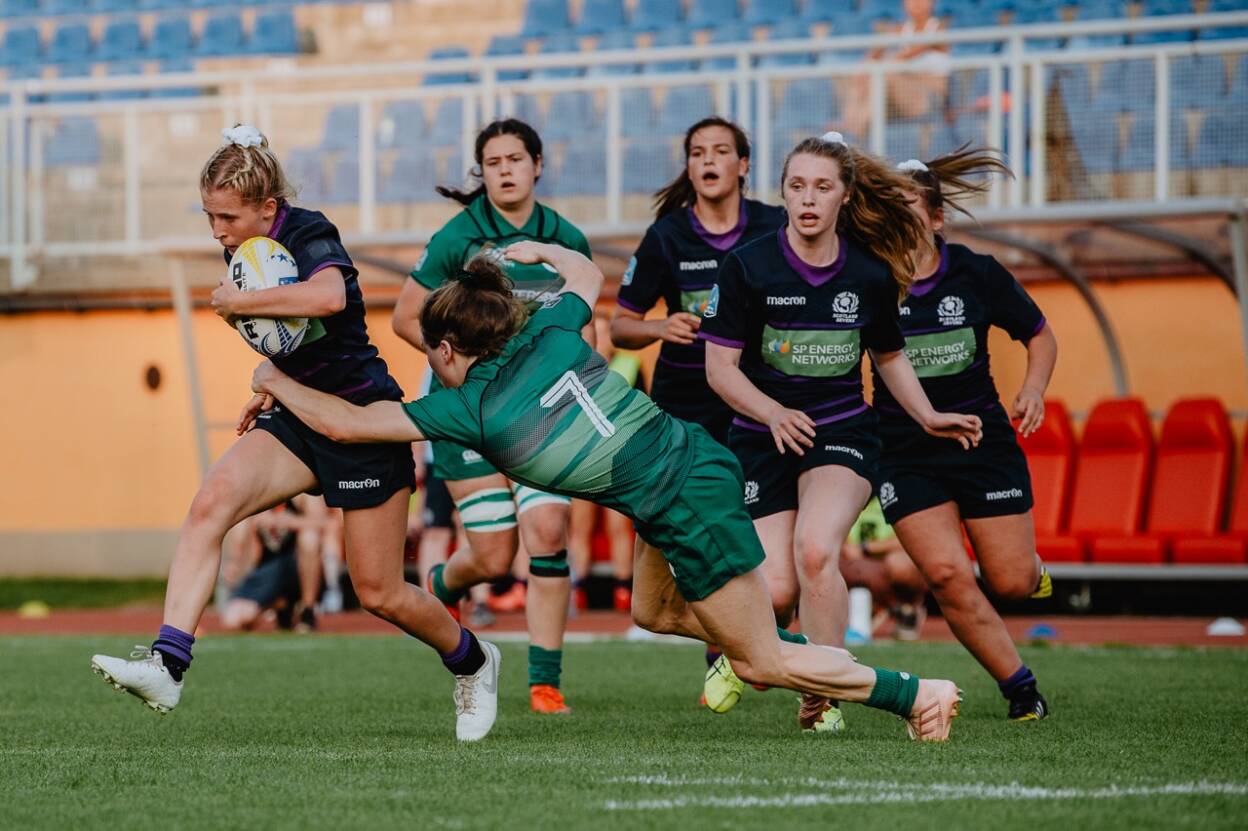 The early momentum had been crucial in Ireland’s recent Home Nations semi-final defeat to Scotland, and it was the Scots who started the strongest in today’s rematch. Parsons and Farrell McCabe were both swatted away as Rachel Philips’ power-packed run earned her an excellent opening try from distance.

Holly McIntyre capitalised on an Irish handling error for the second try and a 12-0 lead, although the margin was back to seven points after Reilly burst onto Alcorn’s inviting pass out of a tackle and sprinted away for a rallying score from just outside the Irish 22.

Scotland wrestled back control of the scoreboard, though, with two tries from players with senior Sevens experience, Meryl Smith and Evie Wills. The first was from a close-in penalty and the second came after Reilly was binned for a high tackle. A similar offence saw McElligott carded in the aftermath of Wills’ score.

That left Ireland down to five players with time not on their side. Parsons chipped in with an inspirational long-range score to leave a dozen points between them. Ugwueru was thwarted in her attempts to score past the final hooter, by which stage Ireland were down to five again with Farrell McCabe off for not being back 10 metres from a penalty.

The full results, pool standings and play-off fixtures are available here on the Rugby Europe website. 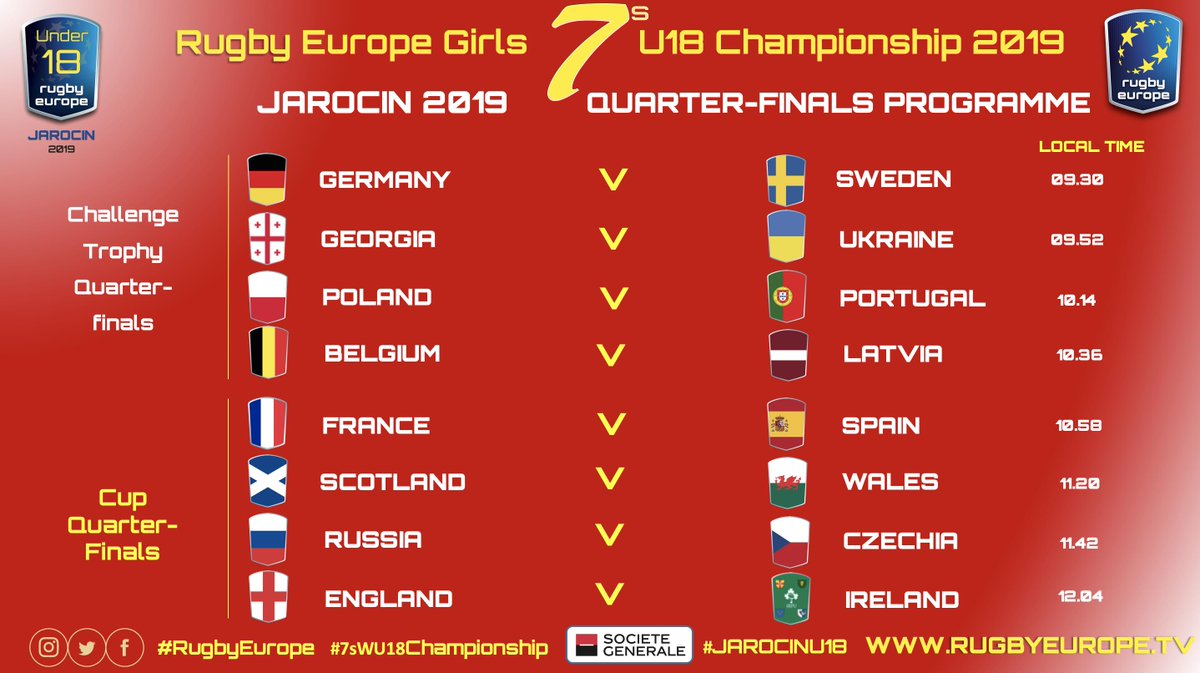