Late penalties from Chris Cosgrave and Reece Malone proved decisive in the middle round of the IRFU Under-19 Interprovincial Championship, as Leinster prevailed in rain-hit Galway and Ulster got off the mark in Bangor.

Table toppers Leinster moved a step closer to retaining the U-19 title with a gritty 17-14 win over Connacht at the Sportsground. The young Blues now sit on nine points (with a +25 scoring difference) ahead of Sunday’s showdown with second-placed Munster at Maynooth University (kick-off 3.30pm).

Munster are still very much in the Championship hunt, lying on five points (+8) after being edged out 13-11 by Ulster, their second round hosts. That result has moved the northern province onto four points (-20) with Connacht, their opponents at 1.30pm on Sunday, now out of contention on one point (-13). 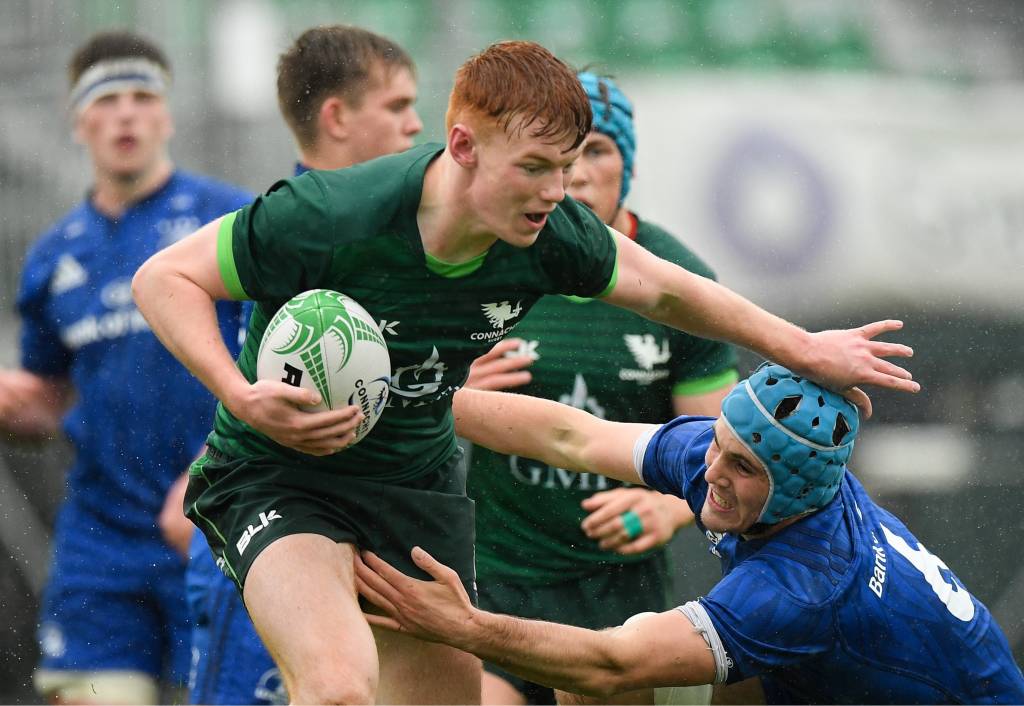 Looking to repeat their Under-18 heroics from last year against Leinster, Colm Tucker’s Connacht team made light of the unseasonal wind and rain to claim a fourth-minute lead. Ballinasloe centre Shane Jennings burst through for a fine individual try, converted by Cathal Forde.

The deteriorating rain-soaked conditions made it difficult for both sides to create opportunities and Jennings’ early score left the contest delicately poised at half-time. A break by Newbridge College’s Marcus Kiely on the left wing gave Leinster some encouragement, although the hosts’ lead was relatively untroubled up to the 50-minute mark.

Using the territory offered up by a Connacht knock-on, Naas full-back Jamie Osborne broke a tackle to finish off a well-worked set play, with Cosgrave landing the levelling conversion. However, the westerners soon capitalised on a Leinster error after pinning them back inside their own 22.

Jennings completed his brace with a 56th minute try, again converted expertly by his centre partner Forde from Corinthians, but Leinster used their bench to telling effect as the fresh legs, combined with the growing influence of powerful lock Alex Soroka, made the difference. 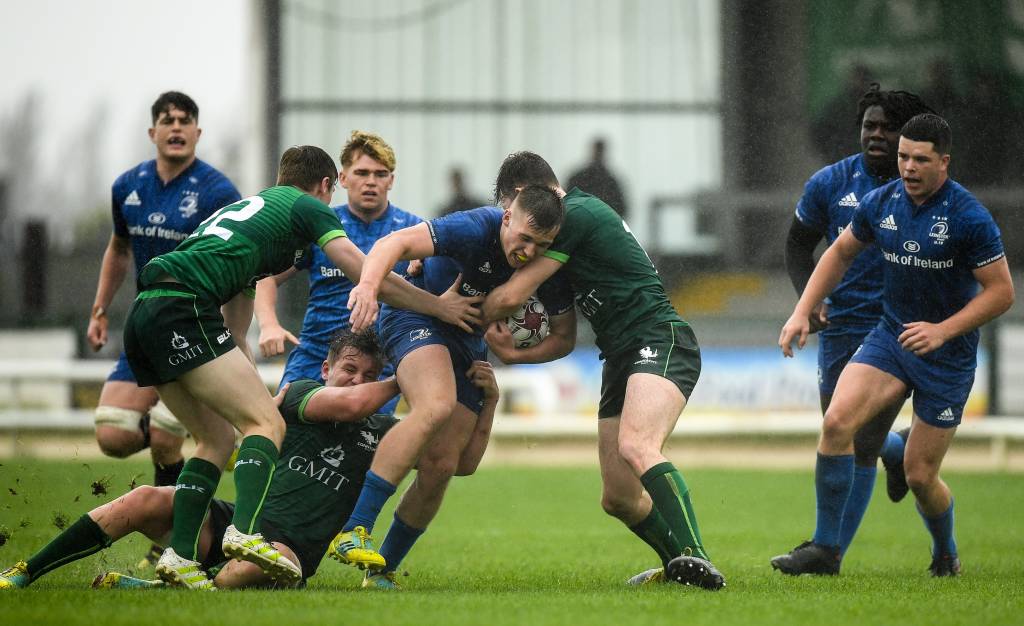 Indeed it was Soroka who drove over in the 61st minute, bringing the visitors back level while Connacht replacement Cian Scanlon was in the sin-bin. Their persistence was rewarded when Cosgrave split the sides with a well-struck penalty five minutes later, and a last-gasp lineout infringement frustratingly denied the hosts a chance to respond.

Giving his reaction afterwards, Leinster team manager Noel McKenna said: “We are really proud of the lads. They went behind twice in terrible conditions and they had every reason to throw in the towel. This is where their character came into it. They stuck at it, kept going, to get the reward in the end.” 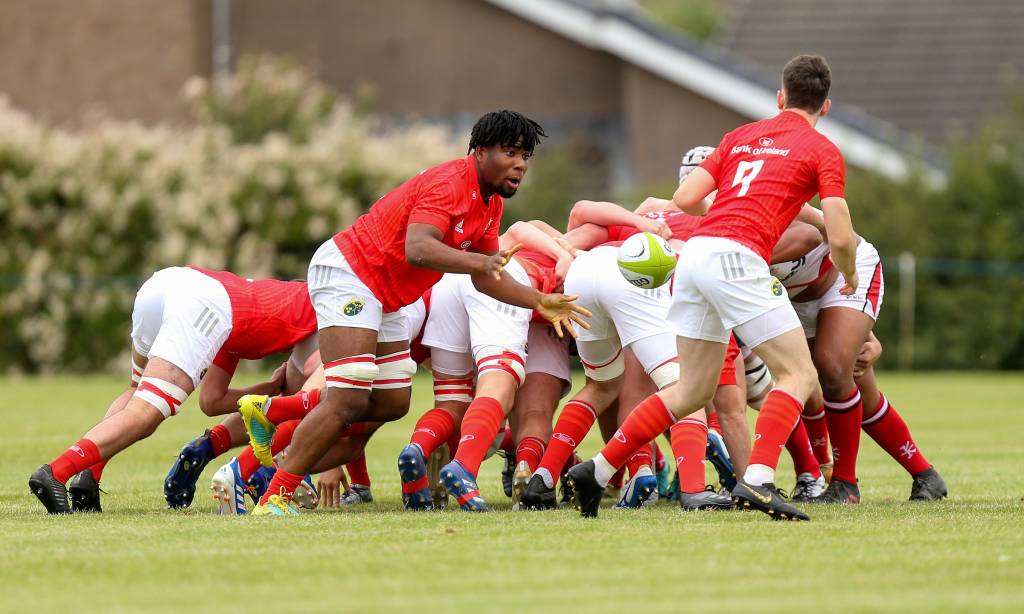 Meanwhile, Ulster also came from behind on two occasions to beat Munster 13-11 at Bangor Grammar School. Playing into a tough and unforgiving wind in the first half, coaches Jonny Gillespie and Jamie Kirk would have been very pleased with Ulster’s efforts to keep the deficit to just six points.

Crescent College Comprehensive’s Jack Delaney landed two first-quarter penalties, and despite some promising phase-building from the visitors, a try eluded them. Captain Harry O’Riordan and Delaney looked dangerous with ball in hand, while Ardscoil Ris number 8 Daniel Okeke consistently got over the gain-line.

The exchanges continued to be scrappy on the resumption, but when Ulster lifted the intensity and gained momentum in attack, they clinically struck for two tries. The first of them arrived just a couple of minutes into the second half when replacement Callum Davidson crossed after a bout of quick recycling and crisp passing.

Midway through the half, Ulster Academy hooker Tom Stewart gathered an overthrown lineout and darted from halfway up into the Munster 22, using a strong hand-off and a well-timed offload to send scrum half Conor McKee over for a try on his return from winning European U-18 Sevens gold with Ireland. 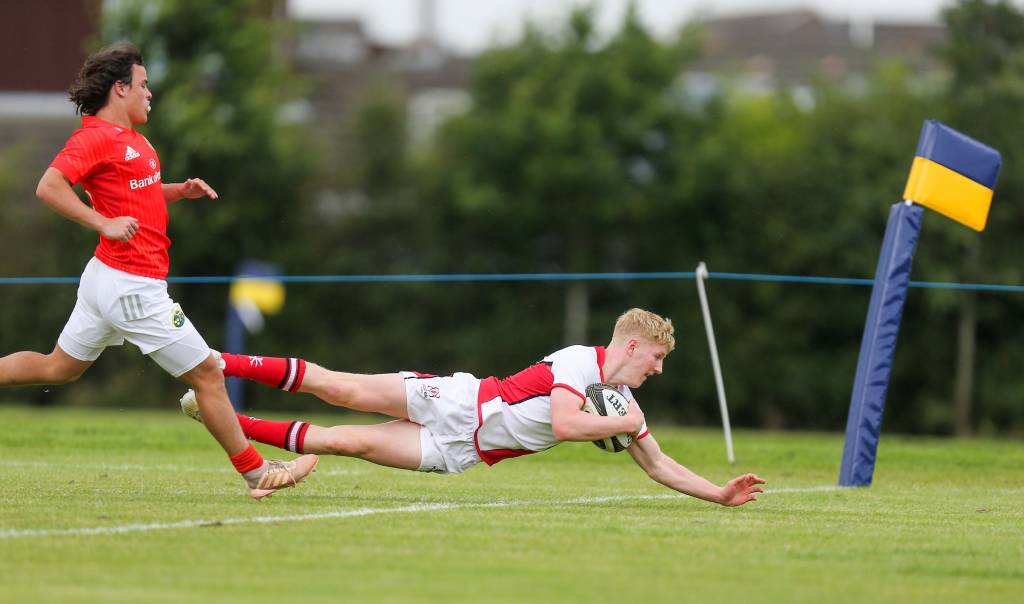 With both tries unconverted from out wide, Munster were still only 10-6 behind and their forwards’ pick-and-goes got them back within striking distance. Quality ball for the backs was turned into an unconverted try for Delaney, but some forward pressure of their own in front of the posts set up Malone’s penalty which nudged Ulster over the finish line.

IRFU UNDER-19 INTERPROVINCIAL CHAMPIONSHIP – ROUND 2 RESULTS:

IRFU UNDER-19 INTERPROVINCIAL CHAMPIONSHIP – TOP SCORERS AFTER ROUND 2: