It will be a case of ‘the hunter becoming the hunted’ at Club de Rugby Ateneo Inmaculada in Santa Fe on Tuesday when the Ireland Under-20s (sponsored by PwC) face England in their opening pool game of the World Rugby U-20 Championship.

After starting their U-20 Six Nations campaign as underdogs, in comparison to pre-tournament favourites England and France, Noel McNamara’s youngsters finished it as Grand Slam champions. Their flawless record in the spring means Ireland have now become one of the teams to beat in Argentina and vice-captain Craig Casey is ready to embrace this new-found level of expectation.

“From winning a Grand Slam there is going to be a target on our back, but I think we’ve got to relish that. It’s probably a change from the Six Nations. I’d say England and France were the hunted and we’re probably turning into the hunted,” said Casey, a real pocket rocket of a scrum half.

“I think it’s something that we talked about in the leadership group a few weeks ago, that the best way to not be hunted is you go hunting as well. Look, we really need a good start against England and they will be gunning for us like the first game in the Six Nations. It will be a hard test. But I think if we win that game, which we will back ourselves to do, it will set us up nicely.”

Shannon clubman Casey was speaking at the recent squad announcement for the World U-20 Championship at team sponsors PwC’s headquarters in Dublin. Following their unforgettable performances in February and March, the group went their separate ways before meeting back up as an extended squad in the weeks leading up to the global tournament.

Casey was delighted to see their time apart had not affected the morale within the camp, saying: “The first day we came back to PwC it was kinda just a reset day. We didn’t really do much rugby, but it was good to get back together and then we had a one-day camp the week previous to last. We couldn’t really do a two-day camp because everyone is in exams and stuff.

“There was a few people missing from the camp, but when we came back the bond is still there, the buzz has even grown. Because we know what opportunity we have in Argentina. I think we’ve parked the Grand Slam win.

“Obviously it’s very hard to park it, but I think it’s something that straight away we said, ‘yeah look, we’ve won the Grand Slam but we want to go on and win the World Cup’. We can’t really dwell on winning a Grand Slam. Obviously we take confidence from winning it, but we don’t dwell on it.”

Nevertheless, the level of their performances throughout the U-20 Six Nations ensures that Ireland are in a good place as they prepare to embark on their journey through a tricky Pool B, which will also include games against Australia, who won the Oceania Under-20 title on home soil last month, and Italy.

Ireland’s class of 2016 – featuring current senior stars James Ryan, Jacob Stockdale and Andrew Porter – reached the World U-20 Championship decider three years ago, beating a hotly-fancied New Zealand along the way. They were eventually defeated by England in the subsequent final, but Casey believes the current squad are also capable of challenging for the title.

“We were happy with how we performed in the Six Nations, but I think there’s still a lot of improvement to do. If we want to win the World Cup, we’ve got to improve. Every other squad that’s going to the World Cup will improve from their games. I think we’ve such confidence in the way we play that we will get better and we’ll back ourselves to win it.” 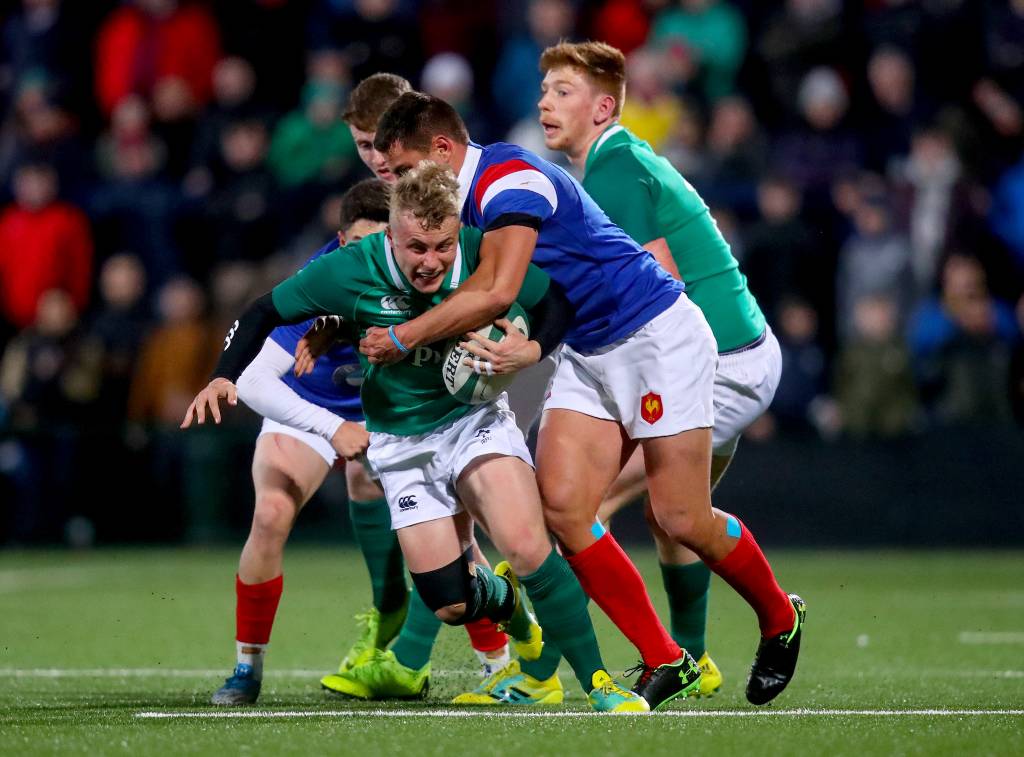 While much was made of the Ireland U-20s’ settled team throughout the Six Nations, they had to contend with some high profile injuries at the tail end of the tournament. Having played a starring role in the opening three rounds, out-half Harry Byrne was ruled out of the closing matches against France and Wales.

Captain David Hawkshaw unfortunately had to sit out the Grand Slam decider in Colwyn Bay with a season-ending knee injury, meaning he will miss out on the south American adventure along with Byrne and talismanic flanker Scott Penny. Despite acknowledging how big a loss the Leinster trio are, Casey has every confidence that the squad will continue to cope.

“Harry and Scott, obviously they’re great players, but the players that are going to come in are going to add something to us as well, I think. Ben Healy at 10 slotted in seamlessly for the France game and he’s been someone I’ve been playing with since Under-17s with Munster. Just such a hard-working guy, you can’t not back him.

“His skill-set is unreal and then there’s so much competition for the back row as well at the minute. I think Ronan Watters played seven for us in the warm-up game (against Leinster) and he played very, very well. Scott and Harry are massive losses because they’re such great guys off the pitch as well as on the pitch.” 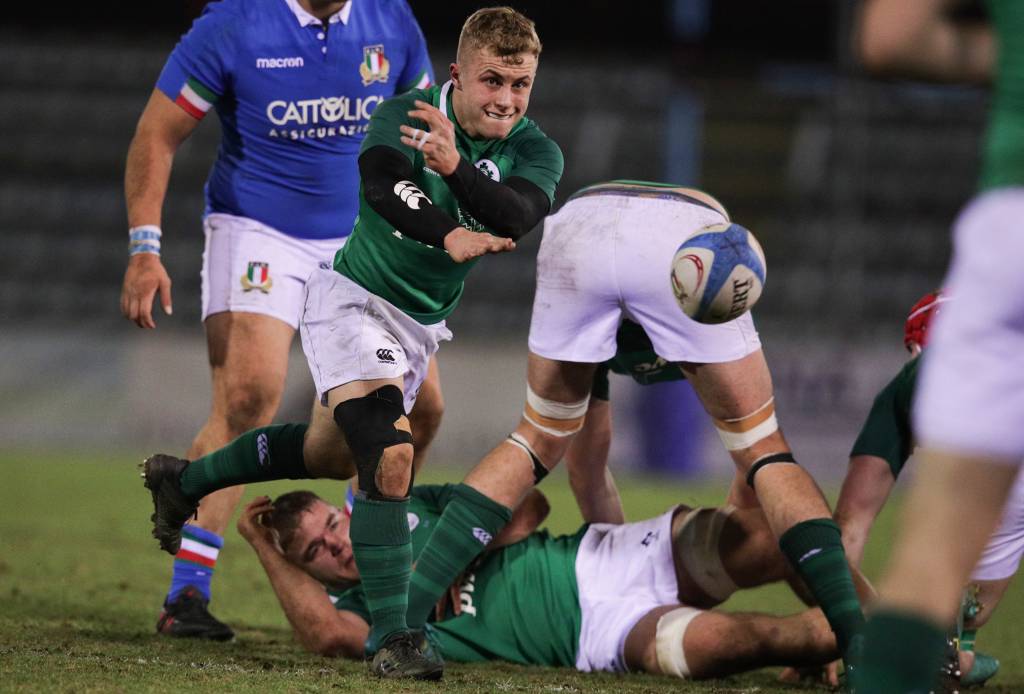 Casey’s form during the Six Nations did not go unnoticed and he was handed his senior debut in Munster’s GUINNESS PRO14 victory over Connacht at Thomond Park in late April. He was not initially part of the matchday squad, but an injury to Conor Murray in the warm-up saw Neil Cronin brought in to start and Casey promoted to the bench.

“It wasn’t really expected. ‘Murr’ went down in the very last play of the warm-up. Obviously wasn’t nice to see, holding his neck, so you don’t like to see that especially with his neck injury. It’s something I prepped all week once I had found out that I was a travelling reserve. I think it was just about backing myself there and then, there was no second doubting myself.

“As soon as I saw him go down, I thought, ‘this is my chance now to make my debut’. So, I just ran in with the team and I tried to instill as much confidence in them so that if I was called upon, they knew I was ready. It’s obviously something I’ve dreamed about since I was a young boy growing up around Munster so absolutely delighted with it.”

Since then, the 20-year-old Limerick native has signed a development contract at Munster with the promise of a professional deal to follow in 2020. This announcement quashed rumours of a potential move to Leinster and – as the nephew of former Munster back Mossy Lawler – he is exactly where he wants to be.

“I was shocked it was all happening. It’s something I have dreamed of, being a professional rugby player for Munster, since I was three or four. Watching my uncle play there and running out as a mascot with Anthony Foley,” he added.

“Since that day (back in September 2005), I have set my mind on being a professional rugby player for Munster, so there was no indecision there. Once that (contract) was there, I was going to sign that. There was no second guessing myself, I was straight. I’m delighted to have signed it.”