Off the back of their sixth place finish in London, the Ireland Men’s Sevens squad will gain further experience on the HSBC World Rugby Sevens Series when they compete as the invitational team at the Paris Sevens, which takes place this weekend at Stade Jean-Bouin, the home of Stade Français.

With the Rugby Europe Olympic qualifying tournament taking place on July 13-14 in Colomiers, Anthony Eddy, the IRFU’s Director of Sevens Rugby, has made four changes to the squad that lined out in Twickenham as he looks to give players more opportunities and game-time against the world’s top teams.

He includes two new caps this week – Old Belvedere’s Peter Maher and Cormac ‘Izzy’ Izuchukwu from Old Wesley – and they have joined up with the squad in the French capital along with Shane Daly and Greg O’Shea. Jordan Conroy, Terry Kennedy, Adam Leavy and Mark Roche all returned home after London.

Ahead of the tournament, which sees Ireland drawn in Pool A with series leaders Fiji, Argentina and England, Eddy said: “The players put in a good showing last weekend in London and it gives us a good idea of where we are at as a group. With the main focus at the moment being Olympic qualification, this weekend in Paris is another good opportunity for the players to test themselves against the world’s top teams.”

Captain Billy Dardis, who scored 28 points in London, added: “We’re delighted to be here in Paris, last week went pretty well for us with a few good wins (over England, Scotland and Canada). Obviously we learnt a lot by playing big teams like Fiji and New Zealand but we’re excited to get going and are looking forward to Saturday.” 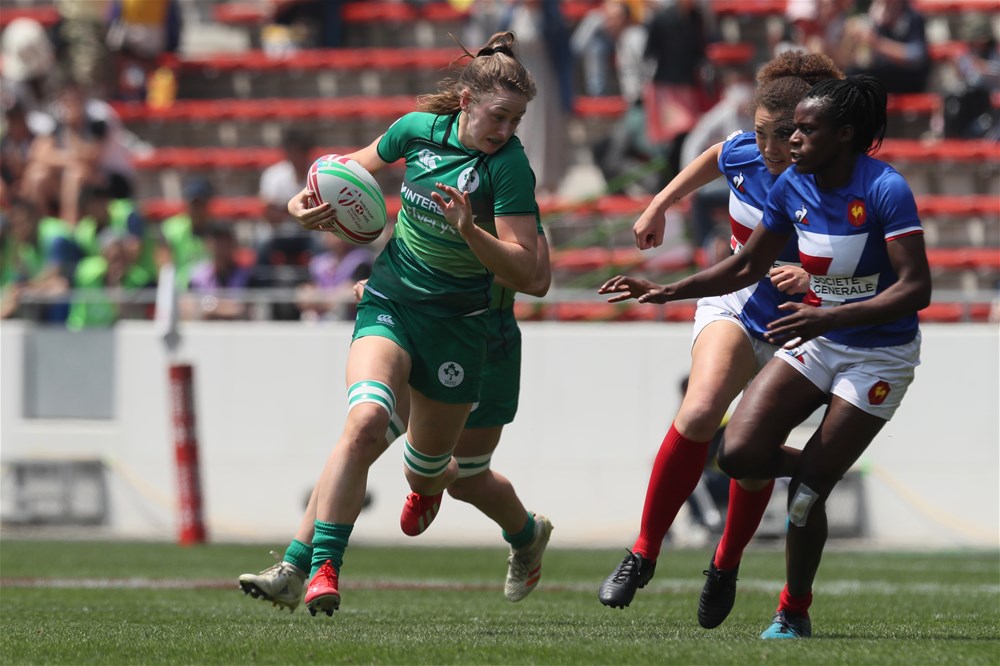 Meanwhile, as part of the Paris Sevens weekend, the Ireland Women’s Sevens team will play two exhibition games against their French counterparts during the breaks in play on day 1 at Stade Jean-Bouin.

Coach Stan McDowell will use the opportunity to give the squad two competitive fixtures as they prepare for their final leg of the HSBC World Rugby Women’s Sevens Series in Biarritz on June 15-16. Saturday’s matches will take place at 1.56pm and 5.22pm local time/12.56pm and 4.22pm Irish time.

Following on from Paris is the first leg of the Rugby Europe Women’s Sevens Grand Prix Series in Marcoussis on June 29-30 – Ireland have been drawn in Pool C with Scotland, Italy and Spain – and the eagerly-awaited Olympic qualifier in Kazan, Russia on July 13-14.

The final leg of the Men’s World Series in Paris will be broadcast on Sky Sports Arena this weekend, while World Rugby will offer streaming in non geo-blocked locations – click here for more information. Tickets, priced from 15 euro on Saturday and 20 euro on Sunday, are available to buy online here.