A Jordan Conroy hat-trick sent the Ireland Men’s Sevens team through to the Cup quarter-finals at the HSBC London Sevens tournament, as they secured second place in Pool C thanks to a runaway 43-12 victory over Scotland.

With England unable to defeat New Zealand by the required margin (10 points) in today’s final game at Twickenham, Ireland advanced to a quarter-final against Fiji tomorrow (kick-off 12.04pm) with two wins out of three. Mick McGrath’s late try earned them a 21-17 first round triumph over the English and they ran in 31 unanswered second half points against the Scots.

It is Ireland’s third time to compete as an invitational team at a HSBC World Rugby Sevens Series tournament in the space of the year – and they made the last-eight once again to match last year’s achievements in London, where they came away with a historic bronze medal finish, and Paris where they topped their pool.

Anthony Eddy’s men returned to England Rugby HQ with two debutants in Jack Daly and Jack Kelly, while Clontarf duo McGrath and Hugo Lennox were also World Series newcomers. The IRFU Sevens programme is building squad depth this summer as they prepare for July’s Olympic qualifying tournament in Colomiers and their entry proper onto the World Series circuit next season.

The Hong Kong qualifying tournament winners quickly found their rhythm against England thanks to strong early runs from Bryan Mollen and Adam Leavy, with Ian Fitzpatrick’s cut in off the right wing and return pass to Harry McNulty getting them within reach of the try-line. Fitzpatrick followed up to score from a quick tap move involving captain Billy Dardis, who converted the second-minute try.

It was level-pegging at half-time, Ryan Olowofela’s winning of the restart setting up a strong spell from the English and their skipper Phil Burgess broke through the defence to send Olowofela, the Northampton Saints-bound youngster, in under the posts to make it seven points apiece.

An uncharacteristic knock-on from Conroy spoiled a promising late attack before the interval, but Ireland were back in clinical form when Terry Kennedy’s injection of pace from a penalty just outside the English 22 – coupled with a well-timed pass – sent Mollen over near the right corner in the eighth minute. Credit to McNulty for his initial burst and some impressive team graft in defence.

Despite the further boost of Dardis’ pinpoint conversion for a 14-7 lead, Ireland were hit with a one-two combination from the home side as they twice worked the ball wide for Tom Bowen and veteran replacement James Rodwell to cross for tries, albeit that Will Edwards was off target with both conversion attempts.

However, with England’s restart not going ten metres, Ireland had an immediate chance to respond with just over a minute remaining. Daly, Lennox, Kelly and McGrath were all on for their World Series bows, and McGrath took his opportunity brilliantly as he handed off Ollie Lindsay-Hague at the side of a ruck and sped clear from the English 10-metre line to score his match winner. 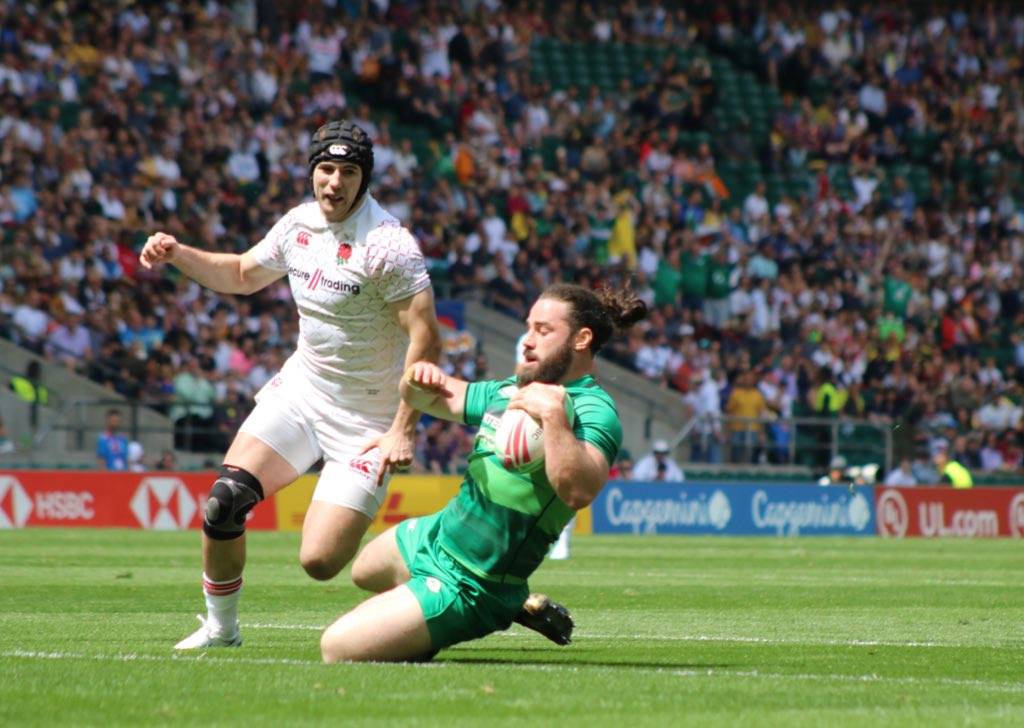 It still took some switched-on defending to see out the result, England pressing for almost two minutes past the final hooter but Mark Roche, who had converted but then overcooked his restart kick, got over the ball at the breakdown to win the game-clinching penalty which gave his side a winning start.

Third-ranked New Zealand showed their class in their second round clash with Ireland, outscoring the invitational team by six tries to one in a 34-7 win. Eddy made four changes as McGrath, Daly, Roche and Kelly were brought into the starting line-up to face a strong All Blacks outfit who had qualified for Tokyo 2020 by the end of the pool stages.

McNulty tapped down Roche’s kick-off for Ireland, who were wearing all-white, yet New Zealand were able to score from their first attack as Tone Ng Shiu broke Roche’s tackle on the left wing and handed off Kennedy to score. The latter was Ireland’s best attacker in the first half, twice breaking from deep but Regan Ware did well to track Conroy and prevent a potential try-scoring pass.

Andrew Knewstubb converted his own late try to make it 12-0 at the break, and a couple of defensive errors took the energy out of Ireland’s comeback. Fitzpatrick was turned over after being tackled and Kurt Baker evaded Conroy’s clutches to set up Ware for an early second half try. A missed tackle by Leavy opened up space for Dylan Collier to notch try number four. 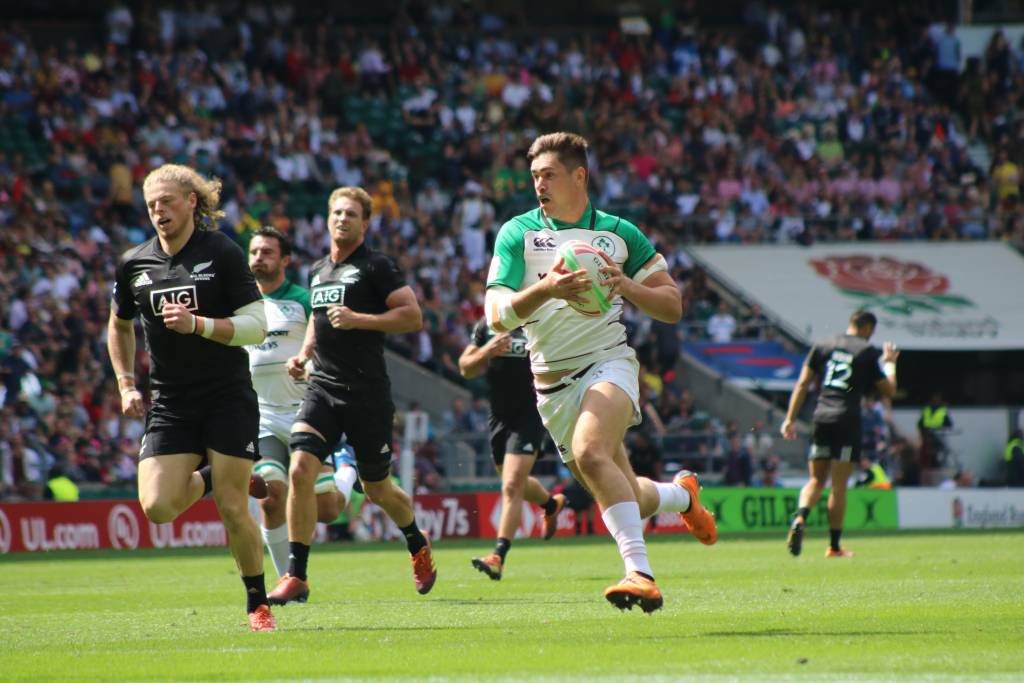 McNulty’s clever positioning at the restart saw him gather the Kiwi tap-down and release the fresh-legged Mollen, who had the gas to run in from halfway after just being sprung from the bench. Roche’s conversion was his final act and despite showing some further promise in attack, Ireland leaked two closing tries as Knewstubb and Ware completed their braces.

It was tight and tense between Ireland and tenth-ranked Scotland in their final round encounter, Conroy starring early on as he helped his team open up a 12-point advantage. The Tullamore man profited from a snappy Dardis break and pass to the outside as the flying winger got the better of Max McFarland near the right touchline to touch down after just 21 seconds.

Midway through the first half, Conroy’s try-saving tackle on Alec Coombes led to the ball spilling loose and McNulty released Conroy from Ireland’s 22 before a return pass put the UCD clubman over for the second try, converted by Dardis. Nonetheless, Scotland stung their Celtic rivals with late scores from McFarland and Glenn Bryce, who both managed to finish with aplomb.

Crucially, Ireland went on to dominate the second half and rack up a big score. They pushed their scoring difference back to +8 which was ultimately just enough to finish ahead of England (+4). Conroy took a great line onto a Roche pass and sprinted clear of Jamie Farndale to restore Ireland’s lead inside 30 seconds of the restart.

It was a double-scores lead (24-12) by the ten-minute mark as Fitzpatrick’s turnover allowed Ireland to test Scotland on the edges and they swung the ball back to the right where Kennedy and Lennox combined to send Conroy over in the corner. McNulty got up well to disrupt the Scottish restart receiver and Fitzpatrick gathered it at the second attempt to run in behind the posts. 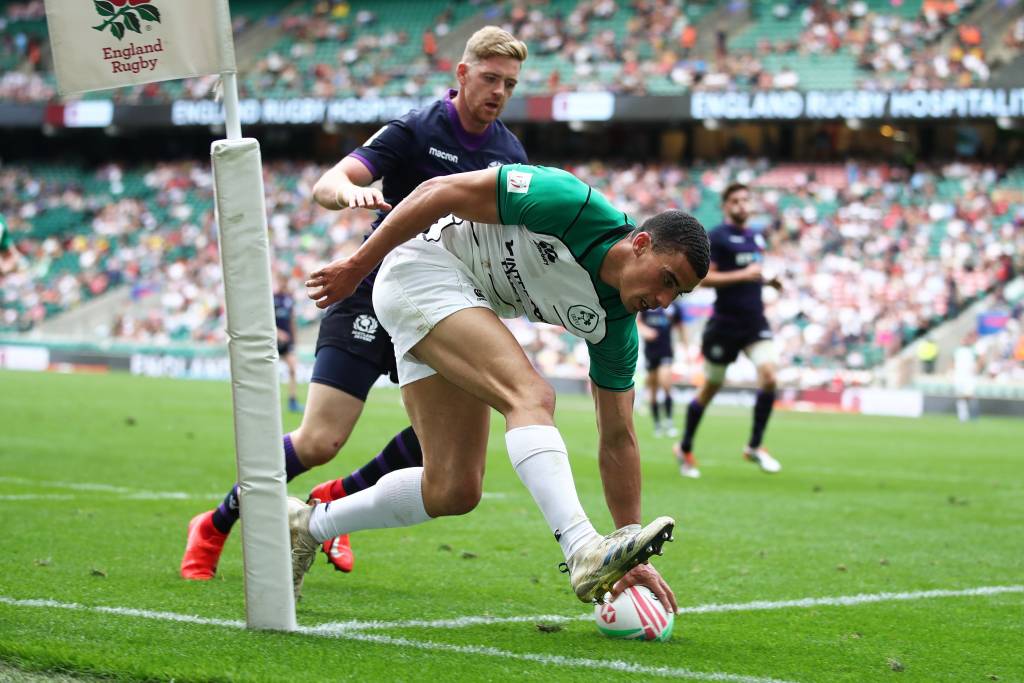 Then it was Kennedy’s turn to ghost through a gap in the defence, passing off the ground for Roche to link with former Ireland Under-20 captain Kelly who darted through to open his Sevens try-scoring account. With Scotland leaking another turnover, McGrath had the final say with a muscular burst for a line and Roche added his third conversion of the game.

In between games at Twickenham, spectators can enjoy live music and DJ sets, fairground rides, children’s entertainers, garden games and chill-out zones, creating a rare and unique sporting occasion for all. Adult tickets start from £30, with tickets for accompanied children under 15 starting from £10. Children under two are admitted free-of-charge. For more information on tickets, please visit www.englandrugby.com/tickets.