Some of the award winners on the night, led by the Players' Player of the Season, Bill Mata from Edinburgh, are pictured outside the Guinness Storehouse in Dublin ©INPHO/James Crombie

Edinburgh ruled the night with a hat-trick of winners at the GUINNESS PRO14 Awards held in Dublin at the Guinness Storehouse.

The Scottish club’s Fijian back rower Bill Mata was honoured by his opponents in the GUINNESS PRO14 as he was named the Players’ Player of the Season. Edinburgh also saw out-half Jaco van der Walt claim the Gilbert Golden Boot with a goal-kicking accuracy of 86.84%, while the club’s retiring Scotland hooker Ross Ford was recognised for incredible longevity in the Championship as he received the Chairman’s Award.

Benetton Rugby’s historic success was recognised with New Zealander Kieran Crowley receiving the GUINNESS PRO14 Coach of the Season award, which was voted on by his fellow coaches. He was selected ahead of Leinster’s Leo Cullen and Andy Friend of Connacht. 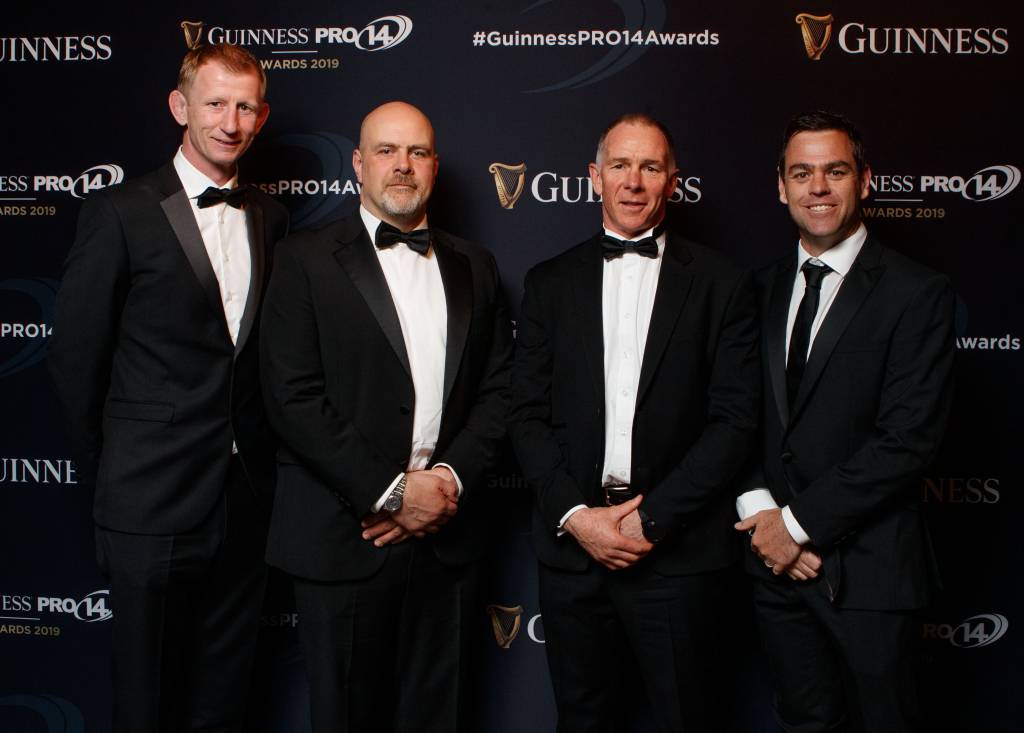 The other big award of the evening was won by Glasgow Warriors’ Adam Hastings who was voted as the Energia Next-Gen Star of the Season, following in the same footsteps as Jordan Larmour, Joey Carbery, Stuart Hogg and Jonny Gray.

Two South African players were also honoured on the night with Toyota Cheetahs duo Sibahle Maxwane and Tian Schoeman picking up some valuable silverware. Maxwane’s 14 tries saw him win the SportPesa Top-Try Scorer award, while Schoeman’s incredible accumulation of 1564 minutes meant he was the Dacia Iron Man winner for the 2018/19 season.

There were two Welsh winners to round off the marquee event in Dublin attended by star names from right across the tournament.

Firstly, Ospreys’ James King became the Ronseal Tackle Machine for 2018/19 as he finished the season with a tackle completion percentage of 96.6%, missing only eight tackles all season and making 224 in total.

Olly Robinson, who was the previous Tackle Machine winner, claimed a newly-introduced award, the Big Red Cloud Turnover King honour. Robinson finished the season with 26 turnovers to his name and as he underlined his value to Cardiff Blues yet again.