Head coach Joe Schmidt has said that Ireland’s first half performance against France yesterday in the Guinness Six Nations was one of the most accomplished in the six years he has been in charge of the team.

Relentless attacking pressure by the hosts kept les Bleus pinned inside their own 22 and having opened the scoring early on through captain Rory Best, persistence paid off in the form of further tries from Jonathan Sexton and replacement Jack Conan for a 19-0 half-time lead.

“I don’t think I’ve seen in the last six years a team control 40 minutes like we did in that first half. I think the French got knocked back early and I think it was hard for them to then get back on the front foot. I think part of the hardship was that we kept that pressure on,” commented Schmidt, speaking at the post-match press conference in the Aviva Stadium.

“To keep that pressure on for the full 40 minutes really spoke volumes about the intensity and about the energy that we brought to our game. Also the cohesion. I know we missed some opportunities, but Rory’s try was fantastic early in the game and for Johnny to score off a nice, crisp back play, that gives confidence.

“Just before half-time for Jack Conan to get around the corner and do what he does well – that is carry and carry in a dynamic fashion. That finished off a really positive first 40 (minutes) for us.”

Ireland made sure of the bonus point with Keith Earls’ 30th international try nearing the hour mark. A raft of replacements were introduced before France avoided a record-breaking loss to Ireland with a couple of late tries. Schmidt admitted a level of frustration with the way Yoann Huget and Camille Chat were allowed through to score.

“You’re up against a good French side. They needed to get something out of the game. I was disappointed because I felt our replacements came on and did well. Then you let it slip and it’s a good learning for some of the guys. We know when they slide through the midfield, we know that Huget runs those support lines so well.

“Once they get through, you’ve got to make sure that you can clean that up underneath and we didn’t. Then obviously the (lineout) drive at the end. I thought maybe they’d put the ball on their own back, but once the on-field decision was a try and you couldn’t see either way that was always going to be the result.

“To be there in the first place on the back of a scrum penalty that we conceded after looking really good in the scrum through most of the game was frustrating,” said the New Zealander after his final Six Nations match of his six-year Ireland tenure. 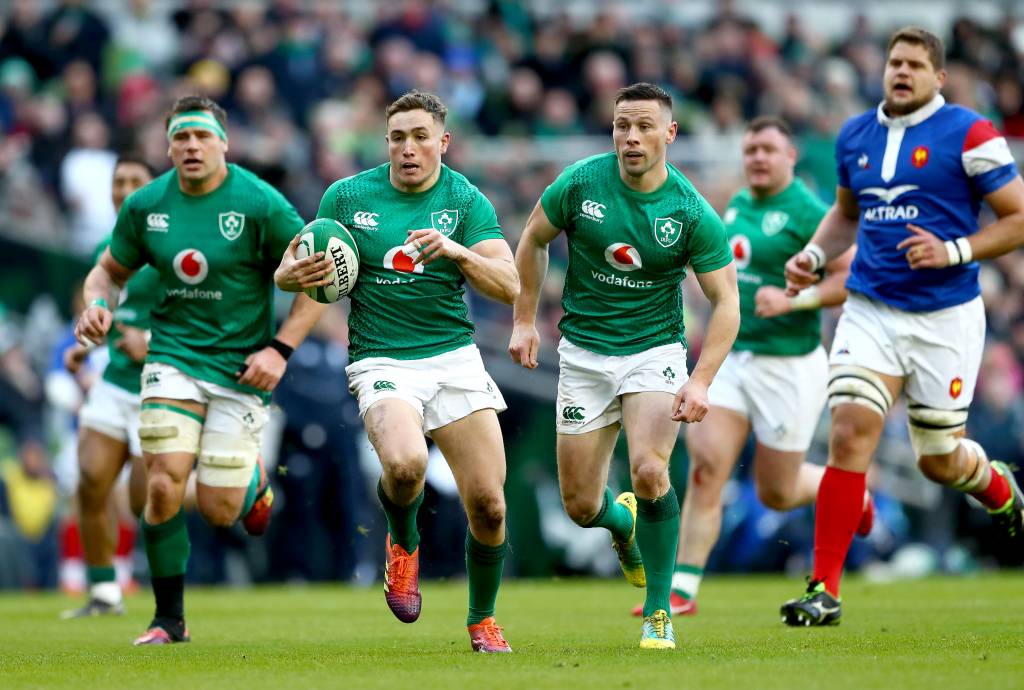 In addition to Josh van der Flier’s 23rd-minute withdrawal – he ‘got twisted a little bit awkwardly’ – Ireland had to cope with the loss of full-back Rob Kearney (tight calf) at the eleventh hour. Schmidt is hopeful of Kearney’s return for next Saturday’s final round showdown with Wales, but said the pacy Jordan Larmour was a more than able deputy.

“Jordan’s first involvement was special, wasn’t it? Finding that space into the corner, forcing Damien Penaud to put that ball into touch after that kick receipt. I thought that was super. I’m sure it gave him a spring in his step. That his first involvement is positive and on the back of that he had a number of good, positive involvements.

“When he got through the middle of their midfield defence, he is freakishly good on his feet. He thought he was going to work his way back up the pitch at one stage to make sure he beat everyone! Unfortunately someone catches up with you and I think it just happened to be Mathieu Bastareaud that nearly killed him!

“I thought he linked well with the back-three sometimes. He brought the ball back and linked. I thought it was a really good performance from Jordan, in a real pressure cooker.”

Meanwhile, it was not just Schmidt’s Six Nations farewell in front of the home support. His captain Rory Best is expected to bring the curtain down on his glittering playing career at the conclusion of the Rugby World Cup later this year. He had managed to keep this fact in check for the majority of the build-up, until the significance of the game finally hit home.

“It wasn’t something that I’d overly thought much about until yesterday (Saturday) and then over the last 24 hours. It’s strange to think it’s the last time you’ll hop on a team bus to go to a Six Nations game here. I think in terms of the result and the performance, it’s exactly how you’d plan your last home game here,” acknowledged Best.

“That is how you’d want it. Just with the intensity that we played with, especially in the first half. I was delighted to be a part of that. Like I said yesterday (at the Captain’s Run press conference), it was mainly Joe. He got very emotional, told me that I wasn’t allowed to keep going after he left! It is what it is.”

Regardless of what he decides in the future, Best will have a key role to play in the Ireland set-up over the next few months. In relation to their much-improved display against the French, the Banbridge clubman believes that their stay in Belfast – during a gap week between rounds three and four of the Six Nations – had them refreshed and raring to go after some below-par performances.

“I think the mini camp in Belfast helped us a bit. It was nice just to get away. We went out for dinner on the Wednesday night. Sometimes when you’re a settled squad, you forget that you do have to spend a little bit of time together. It was nice, we didn’t have the pressure of a game. It was a three-day camp, rather than the last one here that was really a two-day camp.

“I think we’ve been as frustrated as anyone with some of the stuff in the first three games. We just wanted to go out and attack today, whether we had the ball or not. We’re best whenever we go and attack situations. We definitely played within ourselves. It was nice to see us taking a big step towards what we expect from each other,” he added.