Try-scoring flanker Claire Molloy believes the Ireland Women’s team need to work on the ‘finer details’ in order to close the gap on France, their fourth round conquerors, and Women’s Six Nations champions-elect England.

Despite well-taken tries from captain Ciara Griffin, Molloy, who was making her 68th appearance for her country, and Sene Naoupu, Adam Griggs’ side fell to a 47-17 defeat to the French in front of a record-breaking Energia Park crowd. A winning finish to the tournament against Wales in Cardiff next Sunday is hugely important for the young squad.

“It’s the finer details that are letting us down,” admitted Molloy. “That little bit of ill-discipline. Three or four penalties in a row, letting them get into our half to get their third try. Then the little switch-offs, the scoop through the middle via their second row (Audrey Forlani). It’s excellent, clinical rugby, but it’s basics for us that we’re not executing.

“I think what we have to build on is performing for more than just 20, 30 minutes in a game. Which we can show consistently we can do. But we need to hit 60, 70, 80 minutes really, to contest against the Frances and Englands.”

Nonetheless, in spite of the disappointing final outcome, Molloy was encouraged by the way their attack stood up to a formidable French defensive unit. The Galway-born openside typically led by example, sniping over for a first half score, making 62 metres from 14 carries, being terrier-like at the breakdown and having a 100% tackle success rate from 15 tackles and six assist tackles.

“I would have been much happier with our performance in attack. I think we’ve played more expansive, attacking rugby. Our skills were sharper at times. We showed we’re more threatening, we’re less predictable. Strong carries from the likes of Lindsay Peat, who made a big impact as a replacement.

“Deirbhile (Nic a Bhaird) on her first start at hooker made a big impact with her ball-carrying skills, which she has brought from Sevens into the game. I take pride in what we want to build forward into the Wales game. That kind of attacking finesse, but also getting those finer details in defence.” 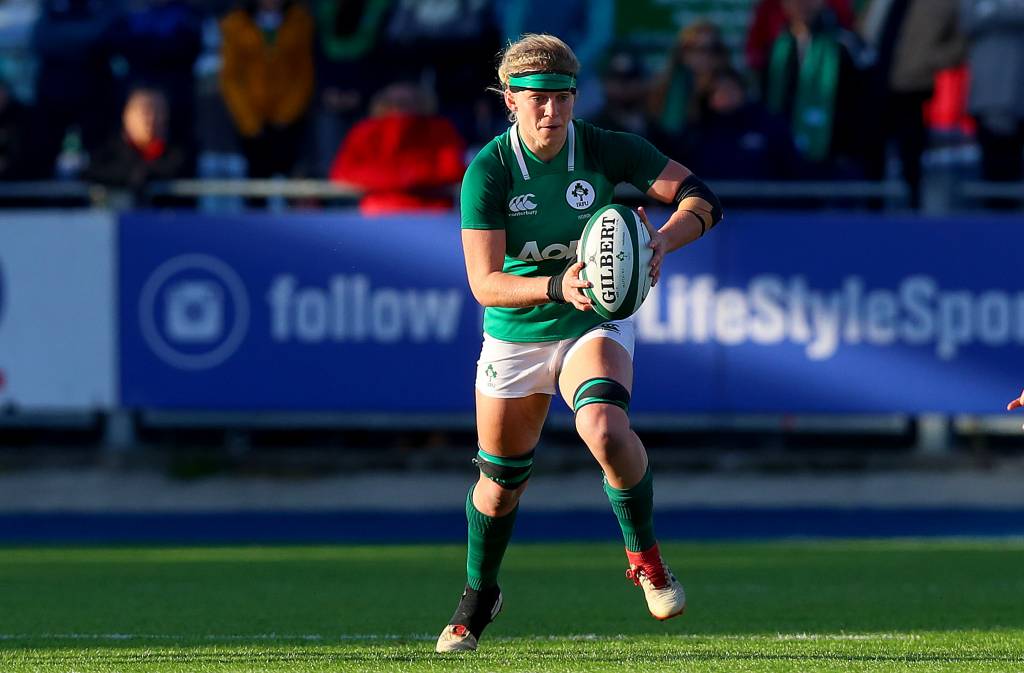 As the most experienced player in the current squad, Molloy will continue to play a key leadership role alongside Griffin and winger Alison Miller. Given how young and inexperienced some of her team-mates are, she has urged patience amongst Ireland supporters, who once again came out in force make it (6.047) the largest crowd for a standalone Ireland Women’s international in this country.

“I think you’ve got to remember the caps and the level of experience of these girls. Some of these girls it’s their first international. Enya Breen making her debut at outside centre at just 19. Your lineout callers are of 10 and 12 caps,” explained the 30-year-old.

“What we’re facing is a vast array of experience in the French sides, in the English sides, even in the Welsh and Scottish sides. We’ve got a very young team. If I’ve got more caps than the whole pack, that says a lot.”

Meanwhile, for tighthead prop Fiona Reidy, it was the ruthless efficiency of les Bleues that set them apart at the end of a frenetic 10-try contest in Donnybrook. As well as giving her all at set piece time, Reidy had an 83% success rate in getting over the gain-line and hit a combined 41 rucks in defence and attack.

“When you play quality opposition like France and you give them opportunities like that, they’re going to punish you. That’s where we need to raise our standard to now, to become a team that are like France. That we can take each of our opportunities and capitalise on everything,” said Reidy, the 16-times capped front row.

“We knew the challenge that was ahead of us. Unfortunately at times, the bounce of a ball let us down. We had such great fight and such great heart, but France are a class team as well. We were unlucky in some instances and there are other things we need to improve upon.” 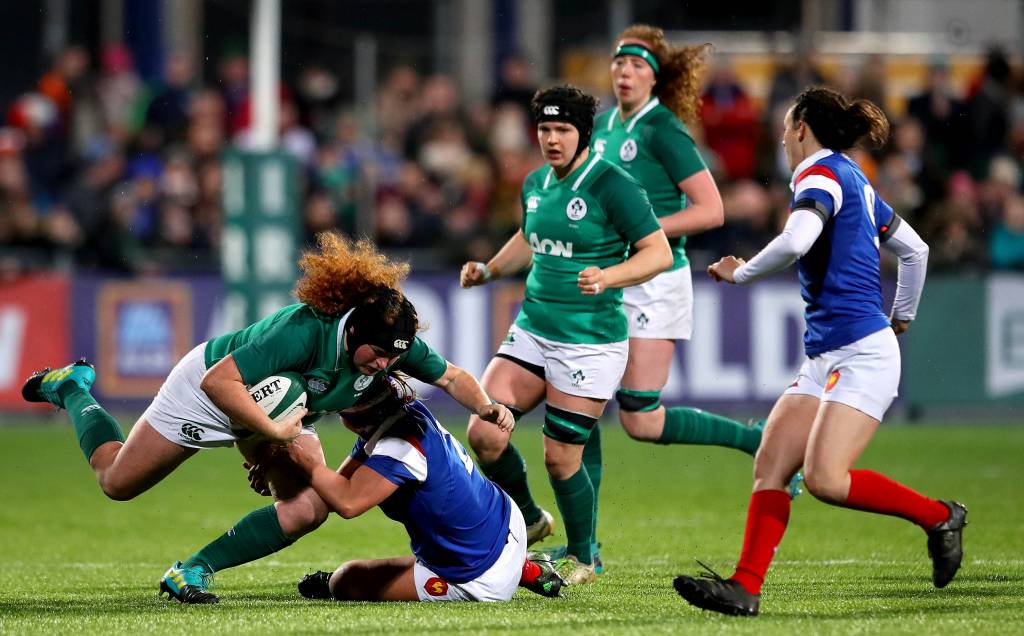 When Ireland hosted England in the opening round at the same venue, the aforementioned Miller’s competitive return coincided with the Six Nations debut of fellow Portlaoise native Emma Hooban. Miller had previously coached the talented hooker at underage club level, before joining forces at international level of late.

It is a similar scenario for Reidy who has been a mentor to another Six Nations newcomer, Deirbhile Nic a Bhaird, at the University of Limerick in recent years. The 23-year-old Ireland Sevens international was making her first start for the Ireland 15s team, having featured as a replacement against Scotland and Italy.

“It’s a special day for me in a sense, where I coached Deirbhile in UL and now to be lining up with her in Ireland is unbelievable. There’s such talented players coming through in all positions and it’s just about building in each of these positions as well.”

On her own return to the starting XV, Reidy enjoyed 54 minutes on the pitch until she made way for Linda Djougang. While it was a frustrating night overall for the Limerick native and her team-mates, she is already looking forward to next Sunday and a shot at a second win against the Welsh at Cardiff Arms Park.

“We’ve plenty to work on again. We’ll get back into camp this week, sit down and look at the areas we need to improve upon and just put it into action next weekend then,” added the UL Bohemians forward, whose club side are currently top of the Women’s All-Ireland League and through to this month’s Women’s All-Ireland Cup final.