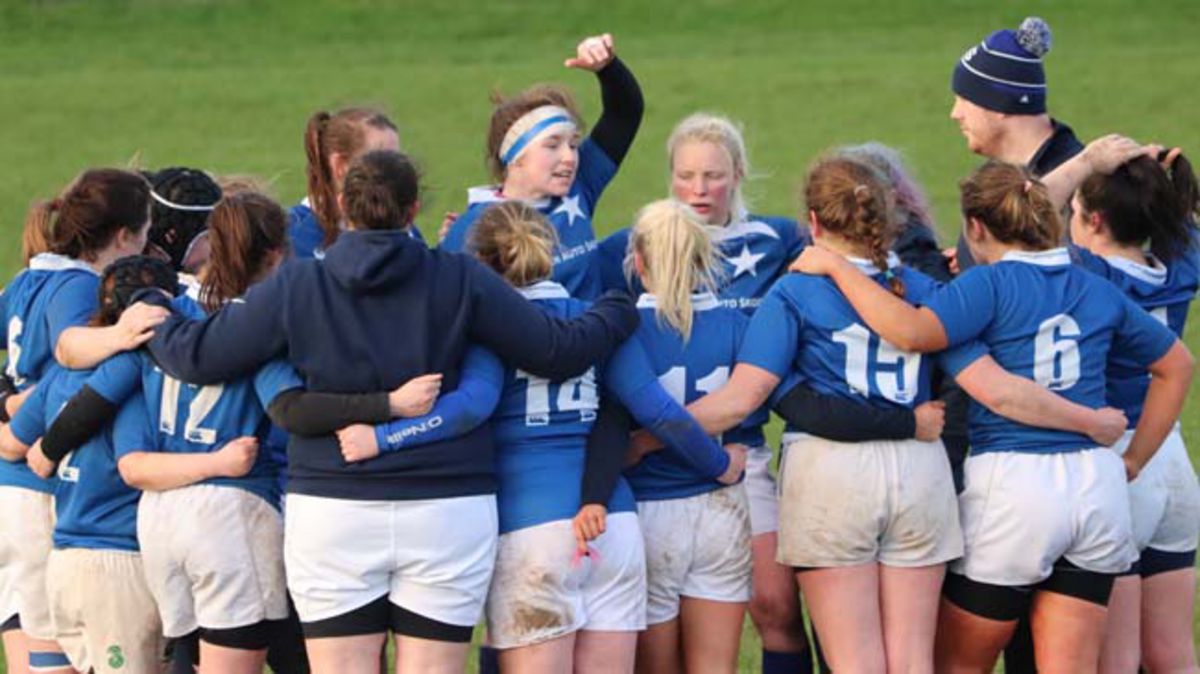 St. Mary’s have had it tough in the Women’s AIL this season. Eight games in – not a point to show for their efforts. “Everyone can see the table,” says captain Aoife Moore. “We know where we stand.”

A trip to Ballymacarn Park for Round 1 of the Women’s All-Ireland Cup on a biting January Sunday didn’t sound like much respite. Ballynahinch were a tough, smart team who knew how to play the conditions. They tapped penalties to use their speed and kicked well from the hand for territorial gain.

St. Mary’s, however, were in determined mood.

“We knew what we wanted to do right from the toss,” said Moore. “If the wind was behind our back, we wanted to pin them down. It wasn’t easy – the ball was whipping up in passing. ‘Hinch looked to use the conditions to put us under pressure, but I think the girls were so resilient today.

“There was a massive sense of belief among us. The Cup was our chance to build up our pride in ourselves again.

“It has affected our confidence before we even get on to the pitch. But we said no – we’re going to do this. We have to play for ourselves and that showed in the performance.”

The opening try came in the first minute and five more were to follow. There was no purple patch. They ran hard all day and their replacements maintained the tempo.

“We’ll take the enjoyment and the positives out of today. The girls have bought into something and we can give it a fair shot.”

Head Coach Stephen Costelloe was “Very pleased with the performance. The things that we’ve been working were on show today. We looked controlled and things are starting to come together.

“That winning feeling in the group makes a massive difference. It’s a feeling the players will want to hold on to heading into next week and another tough game.”

Elsewhere, Suttonians claimed a major scalp in their first ever Women’s All-Ireland Cup outing with a 15-5 win at home to Women’s AIL side Cooke. A strong start with two tries in the opening half an hour did the damage and the North Dubliners kicked on to score the only try of the second half.

The meeting of Tullow and Malone was the tightest contest of the day as both 80 minutes and extra time failed to separate the sides in Carlow. Eimear Hagan and Holly Brannigan tries and an Ella Durkan conversion had the Belfast women leading 17-12 until the 80th minute.

Tullow forced another 20 minutes of play with a last gasp try and had to equalise again in extra time when Malone’s Grace Davitt crashed over. The game finished 17-17 with Tullow advancing, having scored the first try after 21 minutes.

Blackrock and Galwegians ensured safe passage to the last eight, despite tricky away fixtures. Shannon RFC blooded some of their young talent with Martina McDonagh making her senior debut. Opponents Blackrock won out 45-0.

Conditions were difficult in Tralee as Galwegians used their experience to fend off a a spirited home side and win 17-12.

Old Belvedere, Railway Union and UL Bohemian had all received byes into the second round.