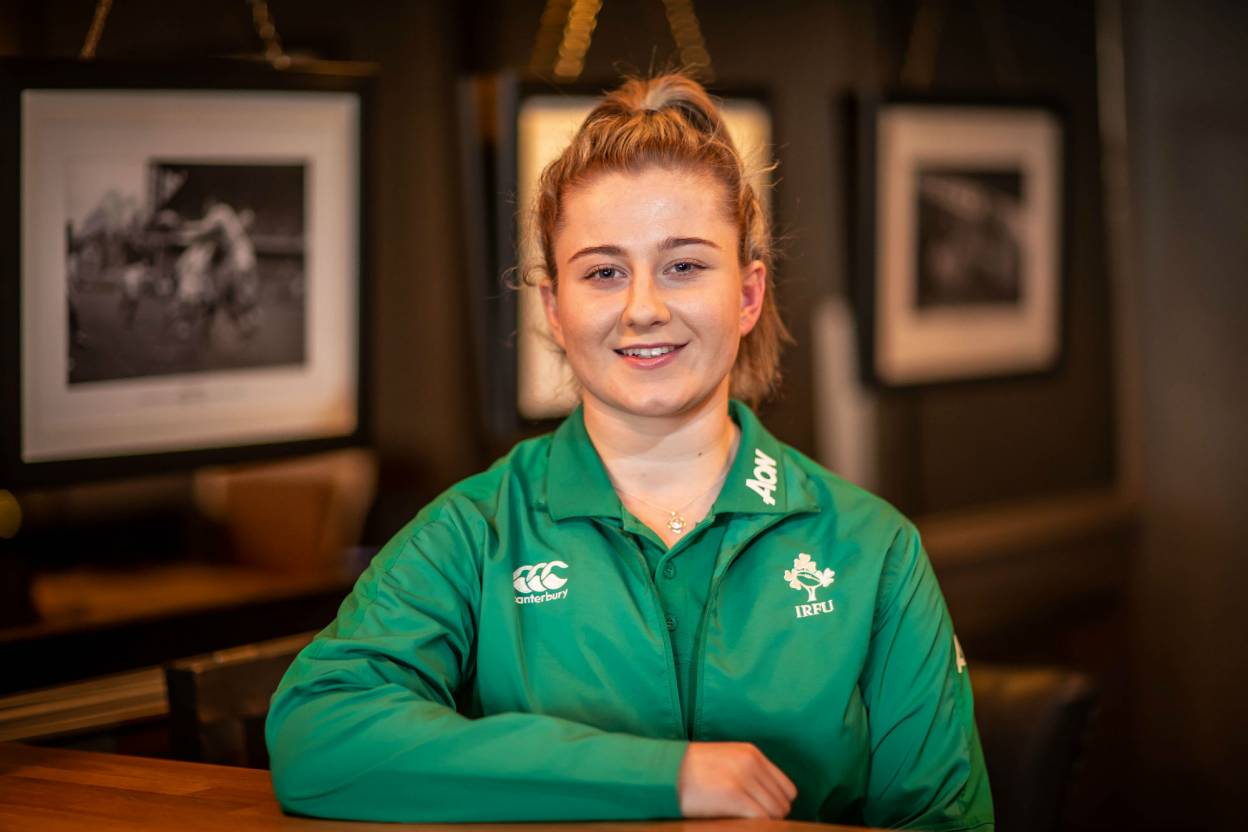 Emma Hooban made her debut for the Ireland Women’s team in November on the back of some impressive performances for Leinster in their IRFU Women’s Interprovincial title-winning campaign.

The 21-year-old hooker lines out for St. Mary’s in the Women’s All-Ireland League but her rugby days started in Portlaoise RFC. An early coach and mentor was Ireland’s Grand Slam winner Alison Miller. They lined out together for Ireland last Friday and spoke this week to Irish Rugby TV about the experience.

Despite the disappointing nature of their 51-7 defeat to England in the first round of the Six Nations, Hooban is adamant that things are ‘starting to click’ for the Ireland Women. She is poised to win her fourth international cap this Friday away to Scotland, who are also looking to bounce back from an opening loss to Italy.

“We’re still building and we are a young team, but we’ve been training very hard. Things are starting to click between us. There’s a lot to come of this team and you’ll hopefully see it now over the next couple of games,” explained the Portlaoise native, just a few days on from making her Six Nations debut.

“I think there’s a great passion and a great heart amongst the girls. I know the score (in the England game) says a lot on the weekend, but we didn’t lie down at any stage. We stayed trying to fight and fight and fight. I think that’s a good attribute that all the girls will bring this weekend. They’re very passionate about the game they play and we’re all fighting for each other.”

The general dominance of the scrum was another encouraging aspect to the Irish performance, with Hooban playing a crucial role off the bench in the final half-and-hour. Nonetheless, there are specific areas that will require addressing ahead of their fast-approaching round two visit to Scotstoun Stadium.

“I think lineouts would be a good area for us. We weren’t so happy with how we performed there against England. That’s a big area we’re going to have to up for this weekend. Our scrum was very dominant, so we’ll bring that as a positive impact into training this week. Just working as a collective unit going forward.

“It was a tough loss to swallow, but there’s no point dwelling on the past. We’re building for the Scotland game. The culture is very good. It’s like ‘delete and next job’, so we’re not dwelling on any of our mistakes. We’re taking our learnings and we’ll hopefully be able to put them into practice now on Friday night.”

Currently in her third season at St. Mary’s, Hooban previously lined out at underage level with her native Portlaoise. As mentioned, during her formative years she was coached by star Ireland winger Miller who has had a big influence on her rugby career right up to them playing together at international level.

“I started when I was around seven or eight. Portlaoise had the boys team. I played with them for two or three years. Then Ali was involved with setting up the first Women’s underage team in the club. I got involved that way and have been playing ever since,” explained the promising front rower.

“She was involved whenever she had time available because of her commitments with Ireland. But a lot of the senior girls in Portlaoise gave a good dig out with Yvonne Delaney. Then my dad and a man called Mark Roberts took over when I was about 15, 16. They coached us then for the rest of our U-18s. It’s mad, Ali kept on saying, ‘God, I never thought we’d play in the same team together’. She’s kinda like my OAP!”

Like any young player who has made their way up the ladder in the past decade, Hooban identifies Miller and Galway-born flanker Claire Molloy as strong role models. International stalwarts Orla Fitzsimons and Paula Fitzpatrick also fall into this category, and the latter two both put a teenage Hooban at ease when she transferred to Mary’s on Dublin’s southside.

“Going in as an 18-year-old playing All-Ireland League rugby was a huge step up for me. Having role models like Orla and Paula is just amazing on the team. They’re always encouraging you to stay going and keep working hard. They’ve been role models for me throughout my whole rugby career.

Amongst the record-breaking crowd at Energia Park last Friday was a large gathering from Portlaoise. It was particularly poignant for Hooban to see many familiar faces in the crowd, having been a regular attendee at Ireland’s home matches prior to her call-up last November.

“I just said it to the girls after the national anthem when we played the USA game (on her debut last November). I was in the stand a year previously saying, ‘this is just amazing’. I never thought I’d be standing in that position as quick as it has been in the last six months, with everything that has happened. It has just been hectic.

“I missed the start of the team talk because I was trying to get around to the Portlaoise girls. They were playing at half-time. They had to make their way up from the other end and I still missed a few girls, but I tried to hang around and talk to them for a few minutes.

“They’re all talking about me. Even my hair, I had to do something with my hair during the game. It’s mad. There’s so many pictures, slagging me over it. It was straight going onto the pitch and turning into a bush at the end of it!”

Whereas the majority of Ireland’s Six Nations squad are balancing a working life with their rugby commitments, Hooban is currently in the second year of a mental health nursing degree at DCU. It may become more of an issue over time, but for now she has worked out a schedule to suit her weekly routine.

“It’s been okay in the aspect that (Ireland) camps being at the weekend and with placements it’s either nine to five or three long days. The course itself, you might have four to five hours max a day, but it’s fairly easy enough to balance so far. I don’t know what third year is going to be like,” she added.