Ciara Griffin marked her final international appearance with two tries as she drove Ireland to a 15-12 comeback win over Japan at the RDS.

The Ireland captain, who is retiring from Test rugby after 41 caps for her country, picked up a couple of crucial scores and increased her influence both in contact and at the breakdown.

Adam Griggs’ final game was not going to plan when Ireland trailed 12-3 at half-time, the quick-witted Japanese sniping through for well-crafted tries from Mana Futura and Seina Saito.

However, despite having number 8 Hannah O’Connor sent off for a dangerous tackle, the hosts hit back with 12 unanswered points to tag on to Enya Breen’s early penalty.

Griffin and her team-mates, including Shannon Touhey who got on for her debut, ground out the victory – their second of the autumn campaign – to provide some momentum to Greg McWilliams in the coaching changeover. 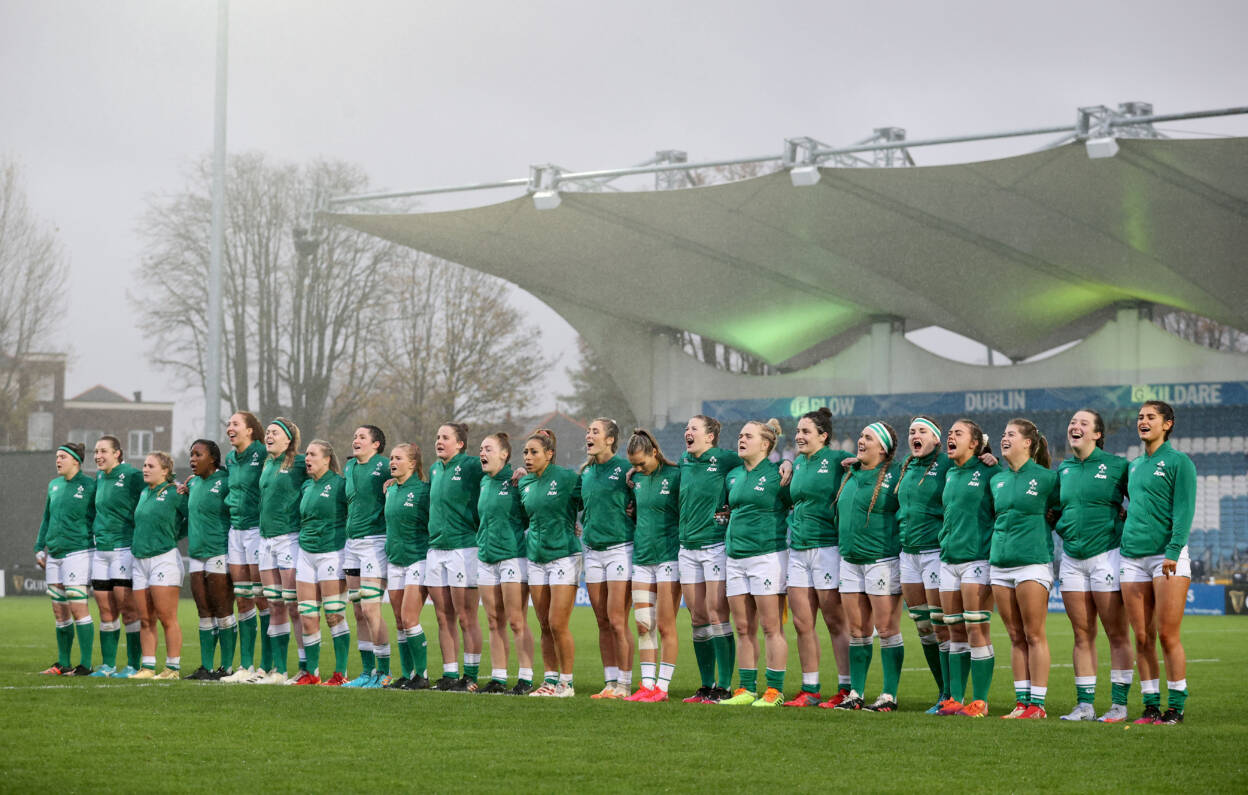 The hosts swiftly applied set-piece pressure, winning a scrum penalty and forcing a crooked Japanese lineout throw. Prop Makoto Lavemai was caught offside from a kick and Breen split the posts with her sixth-minute kick.

Moe Tsukui made sure Japan threatened from tap penalties and their counter-attacking style, and although Griffin had a powerful carry up past halfway, the Sakura 15s struck for the opening try, 17 minutes in.

Ria Anoku darted through into the Irish 22, following up on Kanako Kobayashi’s neat run and pass, and centre Futura was on the full-back’s shoulder to score to the left of the posts. Ayasa Otsuka was unable to convert.

Despite earning two turnover penalties, Japan’s lineout let them down with Linda Djougang hoovering up the loose possession. However, Breen was soon charged down and Eimear Considine’s subsequent cross-field kick failed to connect with Aoife Doyle. 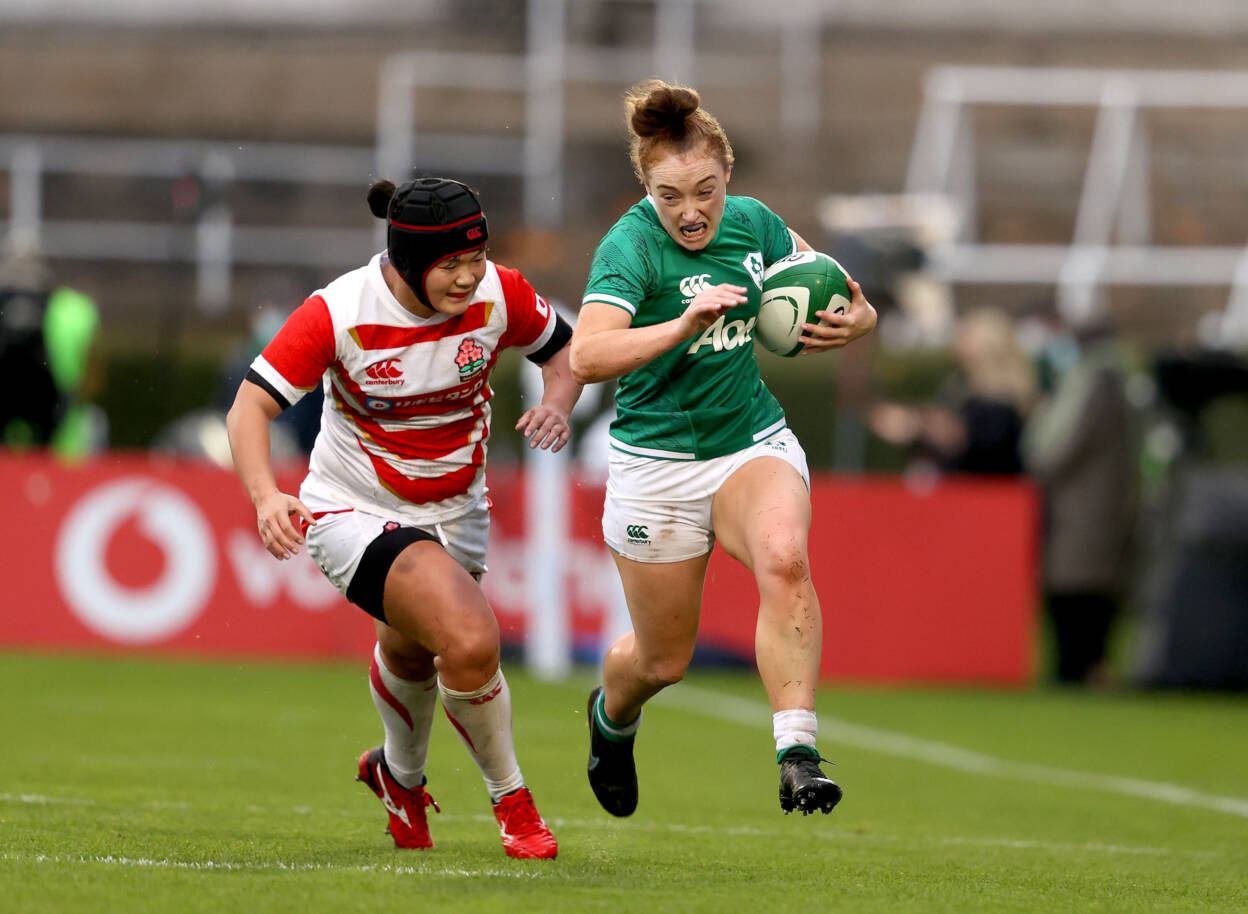 Doyle’s fellow winger Laura Sheehan drove Ireland on with a strong carry, but the scrappy phases continued and O’Connor’s head-on-head tackle on Nijiho Nagata, in the 29th minute, resulted in a red card for Blackrock College forward.

Nagata, the Japanese hooker, went on to have a key role in their second try, making the initial break. Another quickly-taken penalty had Ireland defending on their own line before flanker Saito plunged over with a pick-and-go.

Otsuka converted on this occasion, leaving Ireland with a nine-point deficit to make up. It would have been worse but for Doyle and Lauren Delaney’s efforts in denying number 8 Ayano Nagai a try from a late long-range break. 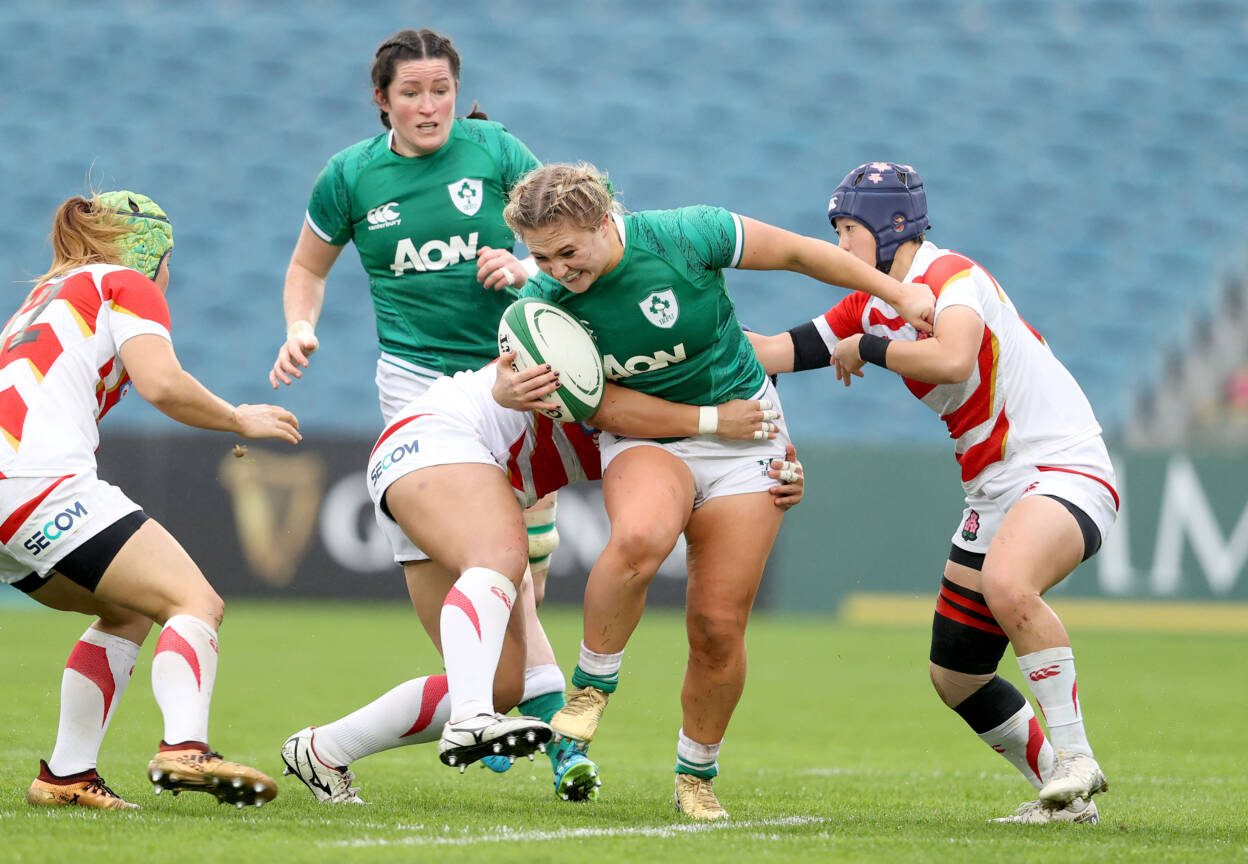 Ireland blew an early lineout opportunity on the resumption, but Griffin led by example when blocking down centre Kobayashi’s attempted clearance kick and getting the grounding in the right corner. It stayed at 12-8 after Breen missed the difficult conversion.

With the home forwards exerting more influence, big carries from Griffin, Aoife McDermott and Djougang off an advanced lineout got Ireland back into try-scoring range in the 53rd minute.

The size advantage paid off for the Irish pack as Kerry woman Griffin muscled in under the posts, with referee Clara Munarini spotting the score. Breen converted to make it 15-12.

Grigg’s charges continued to create chances, full-back Delaney doing really well to tidy up a loose ball and launch a dangerous kick chase, but her own knock-on ruled out a potential try for the onrushing Doyle. 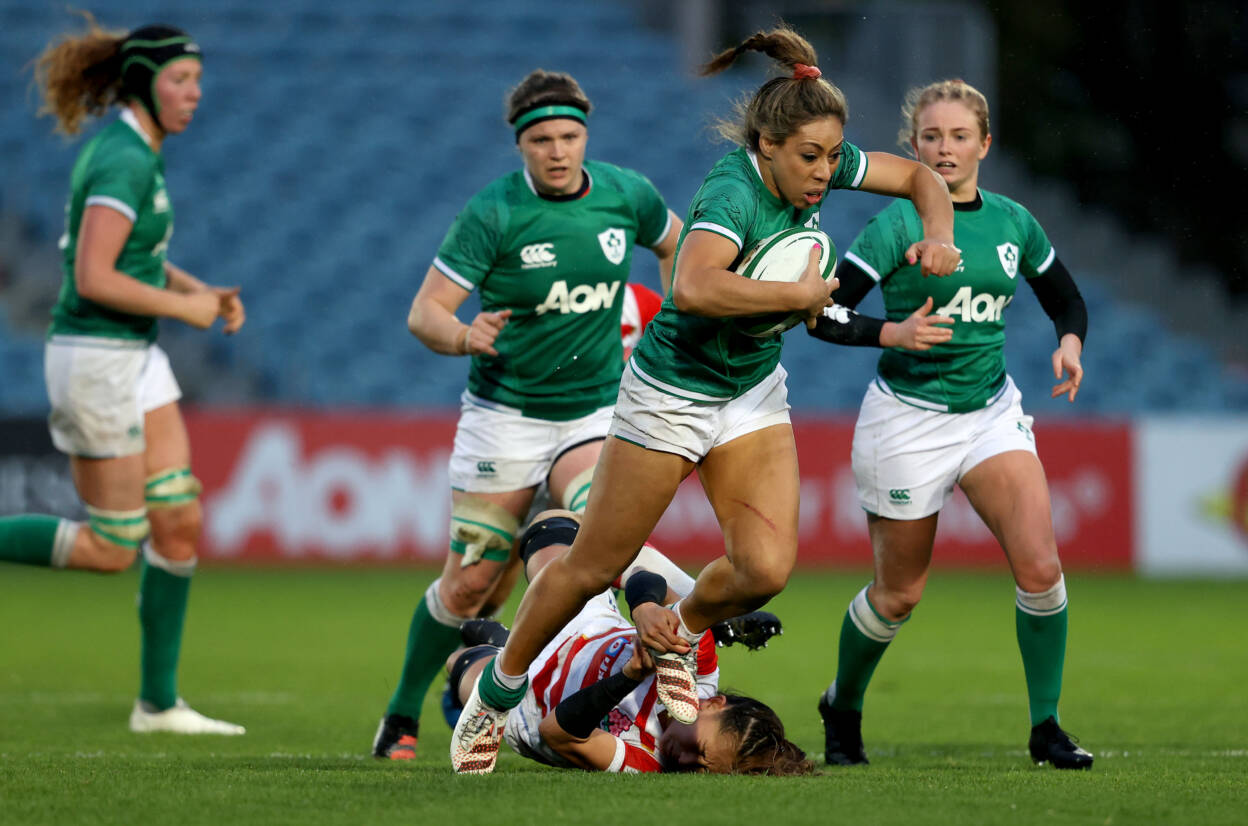 Ireland kept Japan pinned back in their own half, a Griffin turnover penalty being followed a few minutes later by a high tackle on replacement Anna Caplice. Nonetheless, Breen sent the resulting 70th-minute penalty kick wide.

There was no breathing space for Ireland late on as Japan mounted a couple of late surges, picking some holes in the defence. They won two penalties but turned down the points, and the girls in green kept them out.

Replacement Cliodhna Moloney got in at the breakdown to win a relieving penalty, and fittingly the ball was given to Griffin to kick it dead as she bowed out with back-to-back wins from this historic series at the RDS. 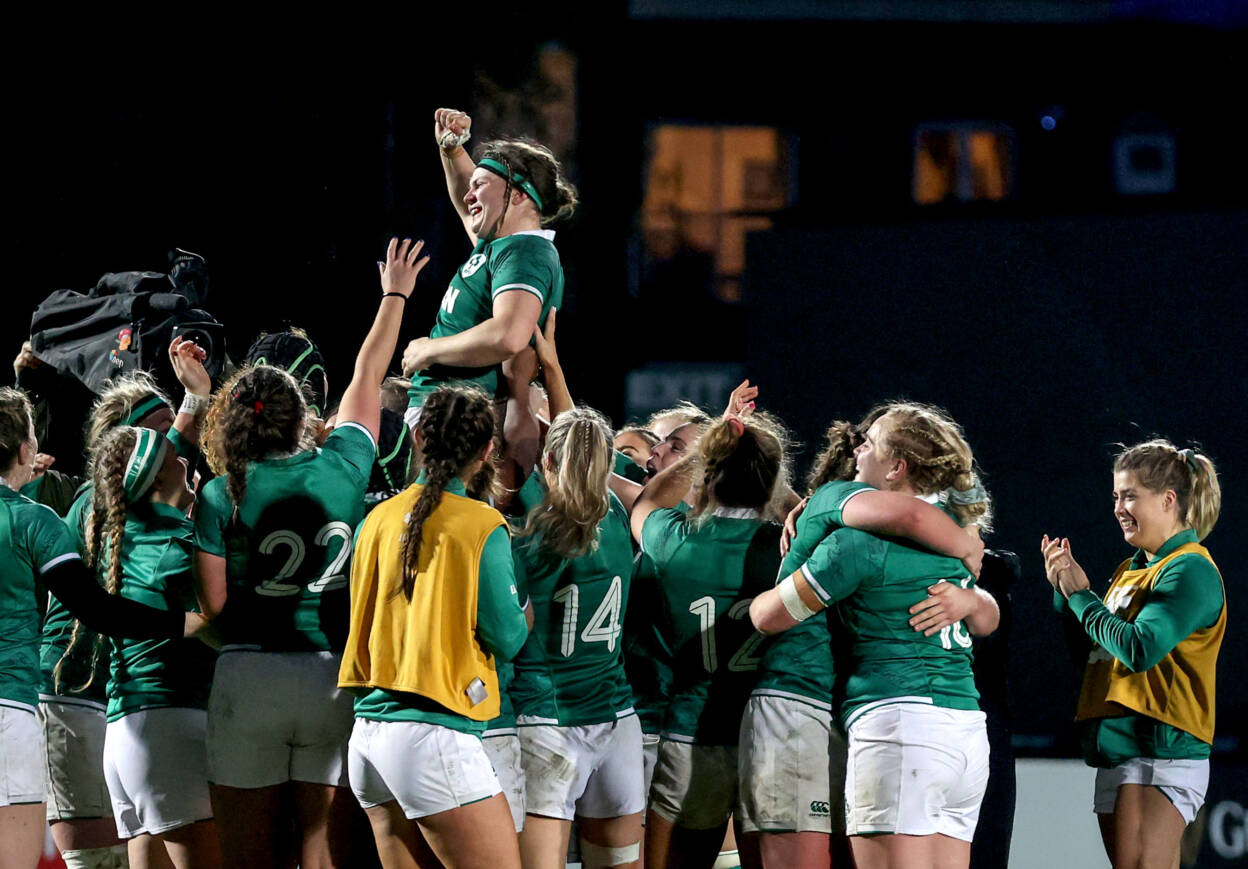