It was a rare home defeat for Clontarf – their first since last November – and leaves Terenure, who are unbeaten after seven rounds, with a seven-point lead at the top of Division 1A.

Back-three flyers Craig Adams and Adam La Grue scored two tries each for Terenure, with some of their most potent attacks masterminded by Ireland Club international out-half Smith.

‘Tarf trailed 24-7 at one stage, but tries in the final ten minutes from Hugh Cooney and former Connacht, Leinster and Ulster lock Mick Kearney gave them two bonus points to limit the damage.

This was a repeat of last season’s final, which the north Dubliners won 29-23, and a tight first half in a wind-beaten Bull Ring eventually went ‘Nure’s way.

Hooker Dylan Donnellan’s sixth try of the campaign got the home side off the mark in the 31st minute, but Terenure bounced back to lead 12-7 at half-time.

Smith made the initial break before prop Adam Tuite powered over for ‘Nure’s opening try, and the former Malone player opened up the ‘Tarf defence again in the build-up to an Adams effort in the corner. 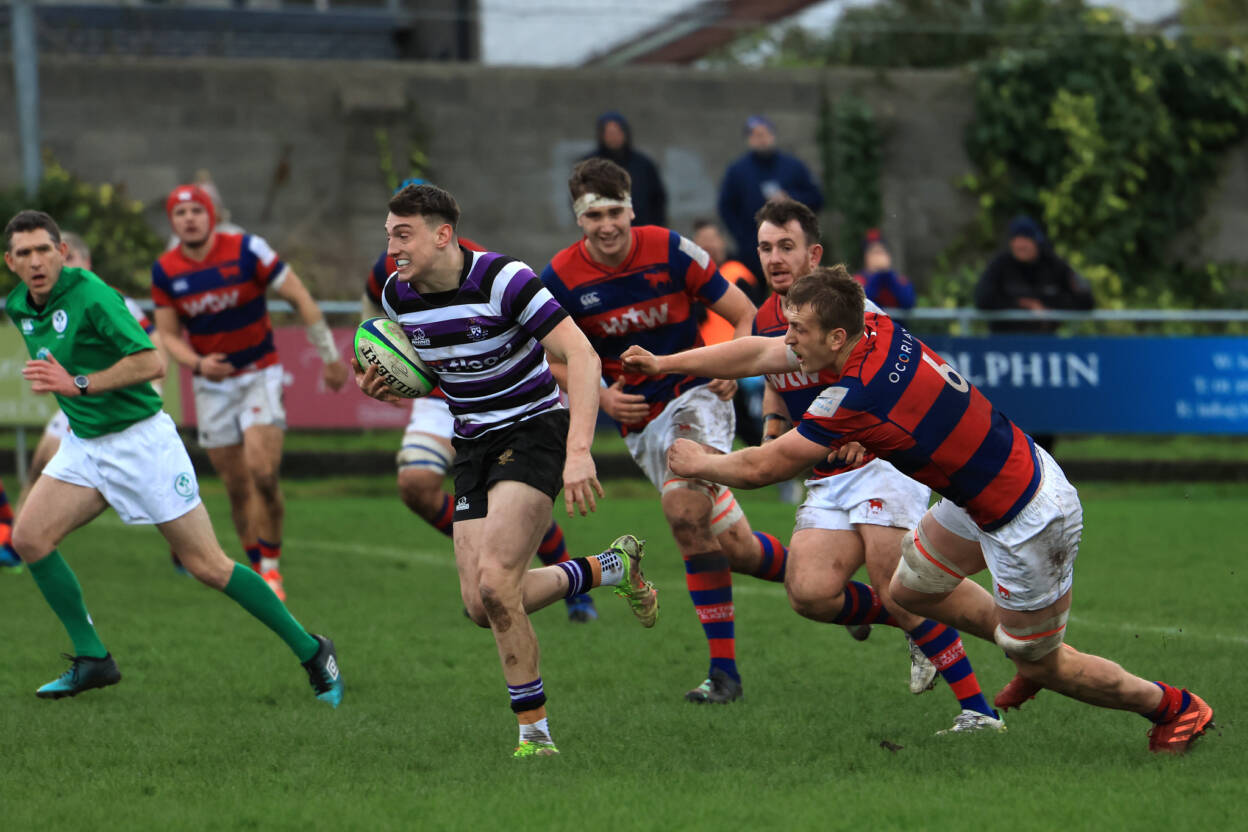 Sean Skehan’s side stung the title holders again just two minutes into the second half. Showing how deadly they can be off turnover ball, they advanced down the right before before La Grue dotted down an inch-perfect kick from Stephen O’Neill.

Clontarf showed impressive composure to work their way back into contention, well-taken scores from captain Matt D’Arcy and young winger Cooney reducing the arrears to 24-19. 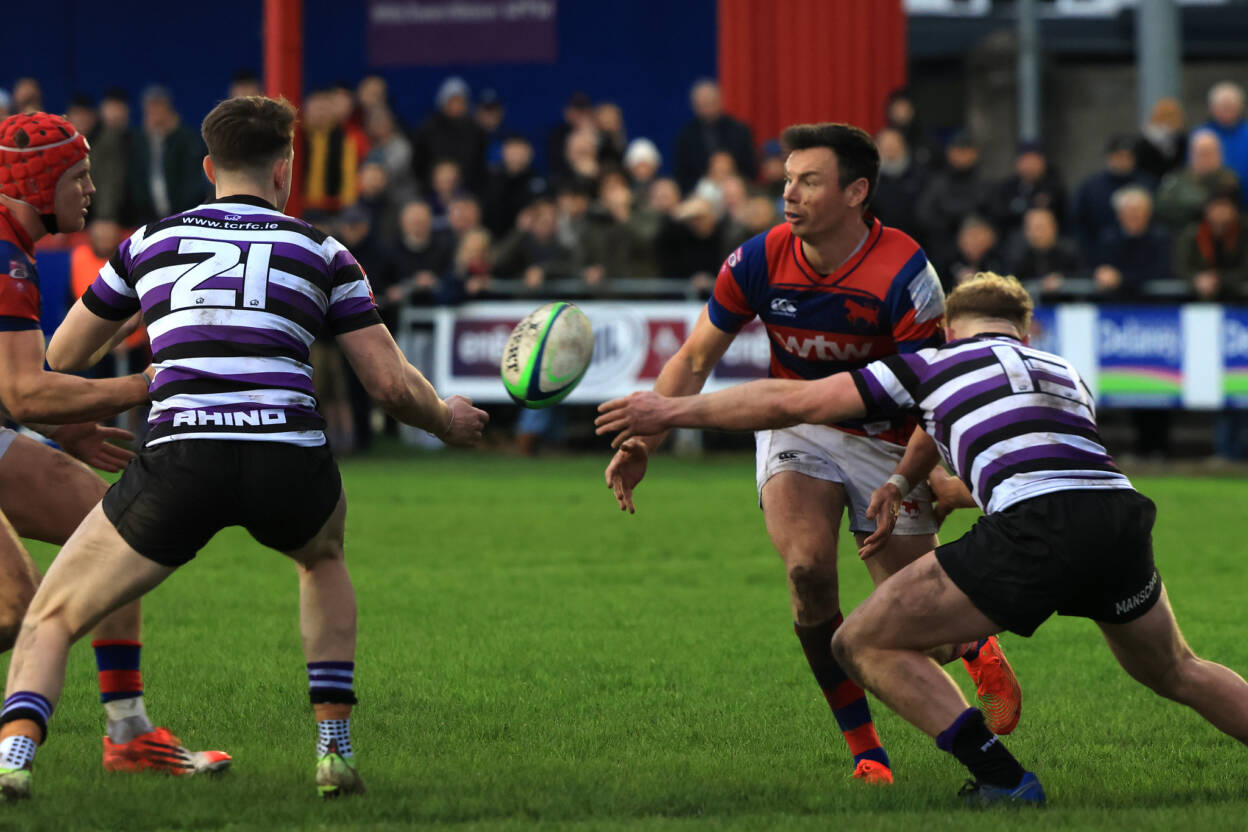 Smith had other ideas and his excellent pass released full-back La Grue to give ‘Nure a decisive 10-point cushion. ‘Tarf’s pack had the final say, Kearney crossing from close range to leave his side just a point behind second-placed Dublin University in the table.

Cork Constitution brought their kicking boots and a dominant scrum to Ballymacarn Park where they got the better of Ballynahinch on a 20-13 scoreline.

Two well-struck penalties from Cork Con captain Aidan Moynihan and George Coomber – the latter’s incredible kick arrowing over from over 60 metres out – helped to give wind-backed Con a 13-point buffer at the break. 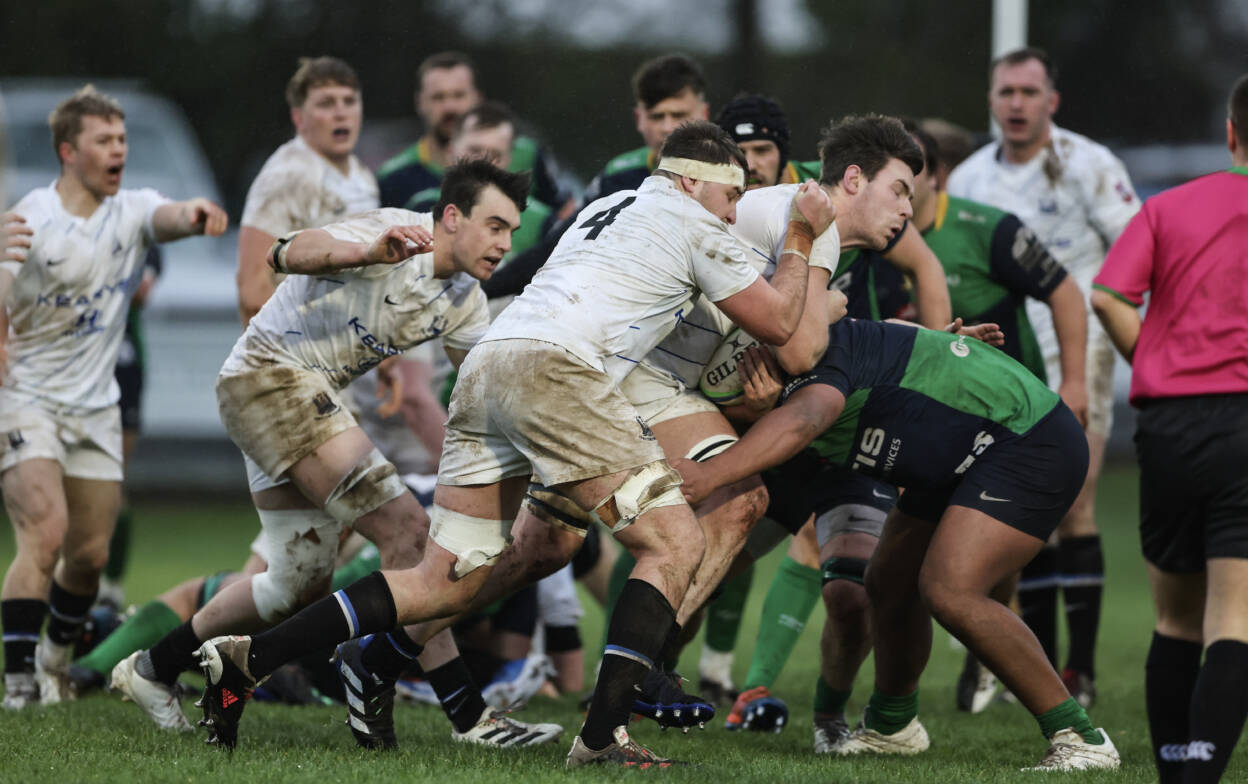 The only try of the first half arrived in the 28th minute, a bout of scrum pressure from Con proving hugely costly for Ballynahinch, who had to replace Ulster Academy prop George Saunderson and then lost tighthead Kyle McCall to the sin bin.

The Con front row of Brendan Quinlan, Billy Scannell and Luke Masters duly got their reward with a penalty try, but they missed out on a second score when winger Billy Crowley was held up by a never-say-die Rory Butler.

Full-back Coomber fought hard to win a late turnover penalty from his opposite number Butler, and from just inside the visitors’ 10-metre line and four metres in from the right touchline, his thumping kick cleared the crossbar to make it 13-0.

As the rain-soaked conditions worsened, Ballynahinch hit back with a barnstorming 42nd-minute try. Lock James Simpson brilliantly barrelled through from a dropped Con pass, and centre George Pringle, released by Greg Hutley, broke in between two defenders and expertly rounded Coomber to go in behind the posts. 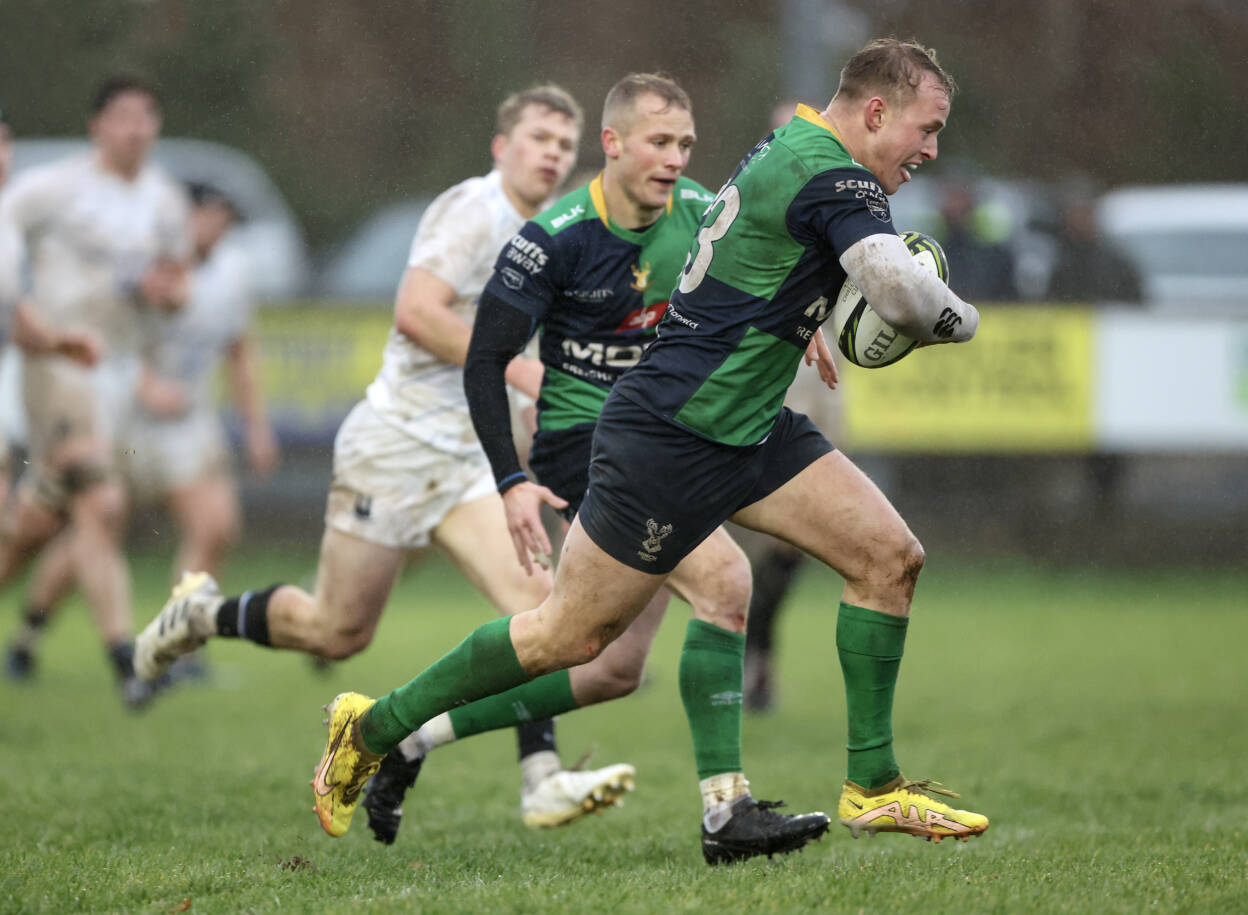 Hutley converted and tagged on a 54th-minute penalty to make it a three-point game. Yet, Con, pushing for their fifth straight victory, turned to their set piece again to put them in a match-winning position.

It was enough to see Jonny Holland’s charges move up one place to third in the standings, level on points with Trinity in second. ‘Hinch battled on and collected a deserved losing bonus point, courtesy of a 78th-minute penalty from out-half Hutley. 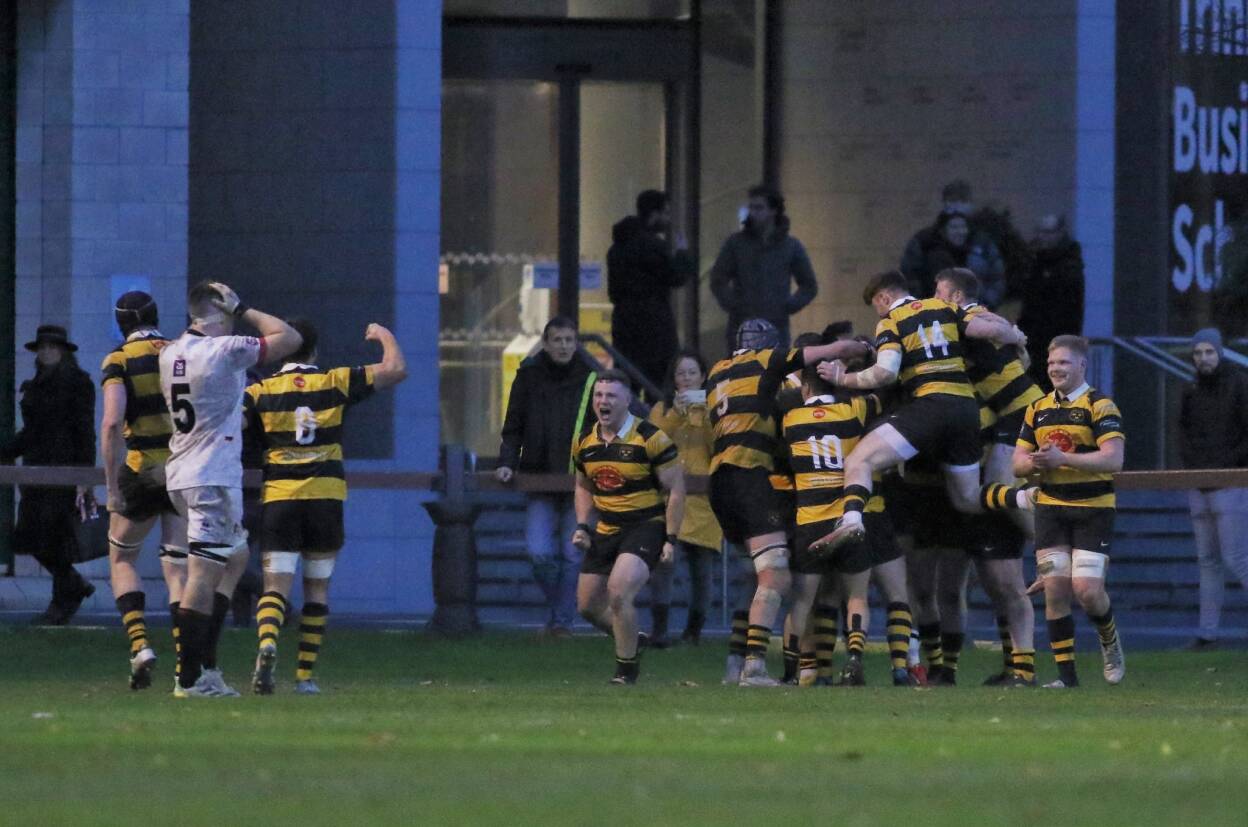 The Cookies have closed the gap on the top four to eight points following Munster winger Conor Phillips’ last-gasp match winner in the capital.

With their lead cut to four points, Trinity were defending a maul on the edge of their 22 when Dan Walsh and Jack Lyons combined to launch a blindside break, giving Phillips just enough space to scamper clear and gleefully score in the corner.

The students notched two tries in each half, their ninth-minute opener coming from James Dillon who gobbled up a perfectly-weighted cross-field kick from Aran Egan to score out wide. Egan added the conversion.

Munsters, who replied with an Evan Cusack penalty, piled on the pressure at scrum time before influential hooker Walsh spun away from Anthony Ryan to crash over to the left of the posts. Cusack’s conversion gave them a three-point advantage. 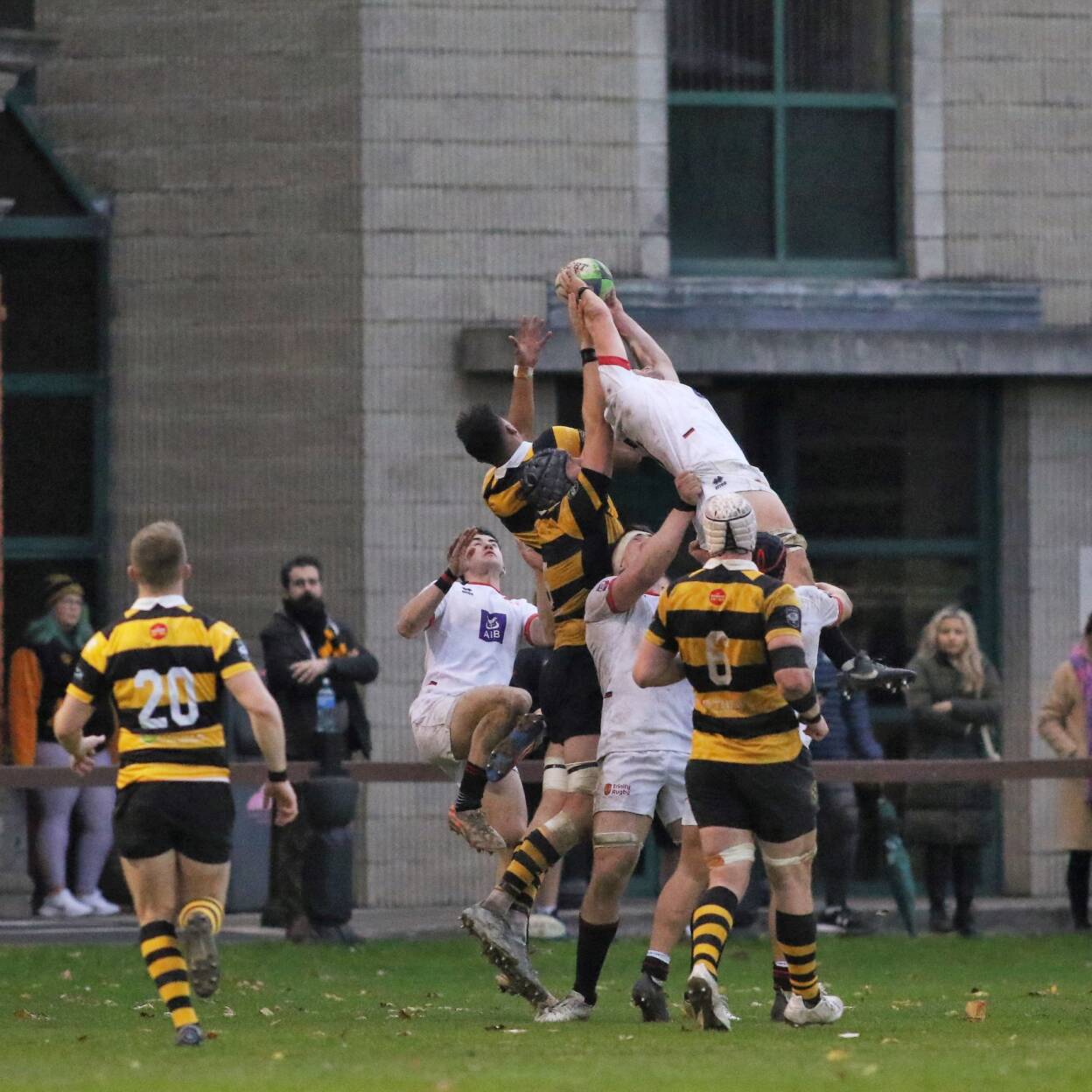 Ulster Academy lock Harry Sheridan did well to lunge over past two defenders for Trinity’s second try, but a closing penalty from out-half Cusack had Gearoid Prendergast’s men leading 13-12 at the turnaround.

Trinity successfully came through Diarmuid McCormack’s sin bin period without conceding, and actually crossed the whitewash while down to 14 men.

Gavin Jones’ breathless break and kick over the top had Munsters scrambling back, and captain Louis O’Reilly swooped on the loose ball to send Jones twisting his way over from a few metres out.

Despite a couple of missed kicks from Egan, Tony Smeeth’s young guns extended their lead with a trademark lung-busting score from inside their own half.

Off a lineout, replacement Aaron Coleman and the supporting Ruadhan Byron punched big holes in Munsters’ midfield. Quick ball allowed Egan to deftly kick towards the left wing where Ronan Quinn showed his footballing skills to coolly nudge the ball past Donnchadh O’Callaghan and get the touchdown.

Egan’s conversion widened the margin to 11 points, but the final quarter provided yet more drama. A cynical slap-down by Paddy McCarthy landed the Trinity prop in the bin, and a monster maul from Munsters forced a penalty try.

It was a double blow as the hosts also lost Coleman to the bin for collapsing the maul. Just as 13-man Trinity were getting back into scoring range, Munster’s Fionn Gibbons won a turnover penalty but flanker McCormack pinched a lineout to give his team a timely lift.

Unfortunately for the vocal Trinity support, the Cookies dug in at a scrum to win a penalty on halfway. It gave them one last chance from a lineout and they took it with both hands thanks to Phillips’ slick finish. 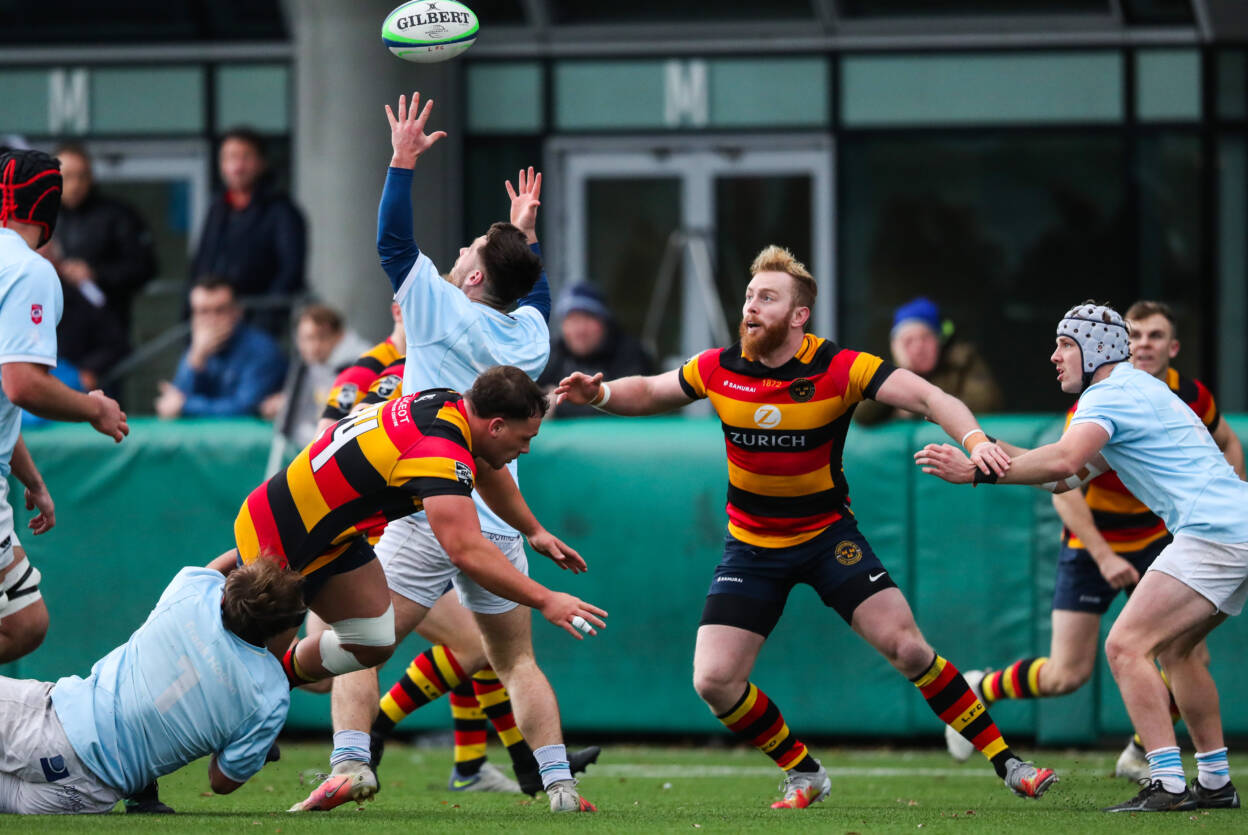 Elsewhere, Lansdowne picked up a much-needed second win of the season, doing most of the damage during the first half against Garryowen.

Bottom side Garryowen left the Aviva Stadium’s back pitch with a hard-earned try-scoring bonus point. Their second half fight-back including a brace of tries from Ireland Under-18 Schools international Brian Gleeson. 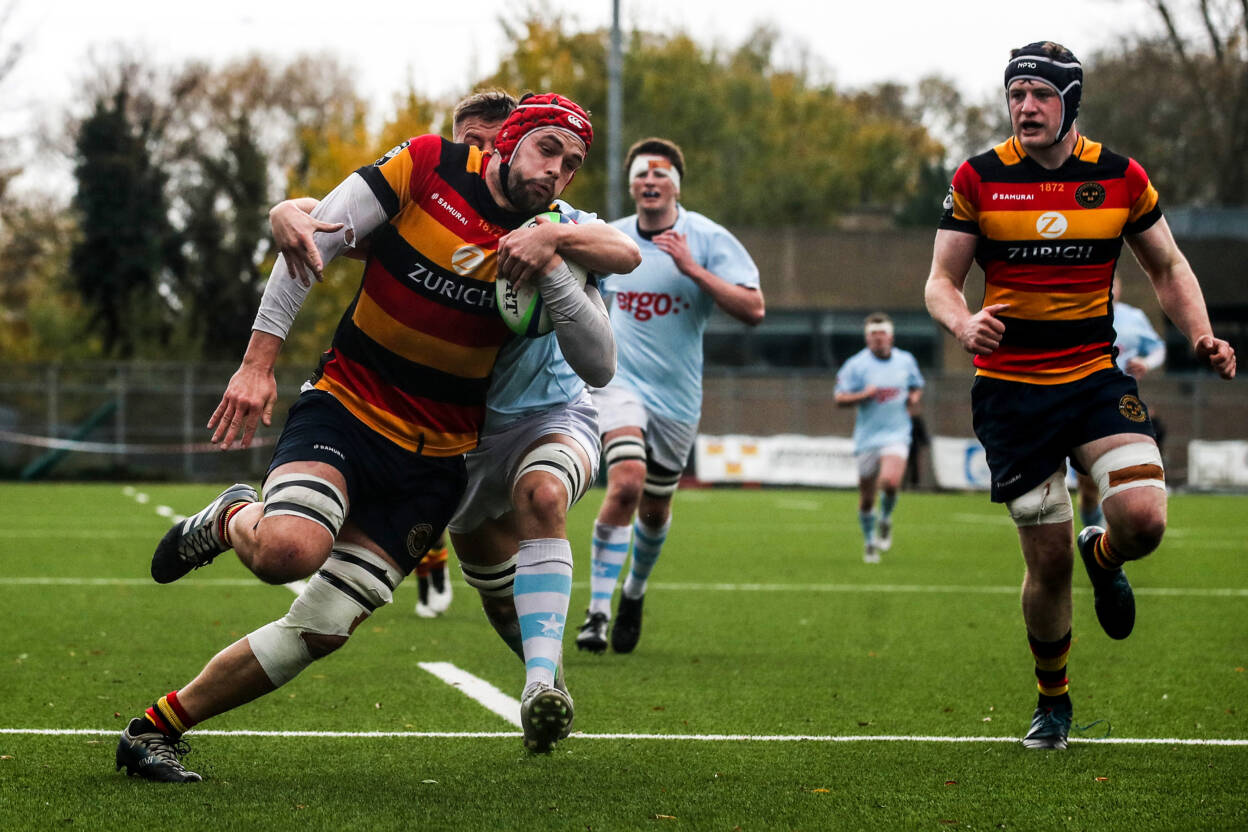 Shannon won for the second time in three rounds, prevailing 36-24 at home to UCD in a thrilling nine-try contest. Three tries inside the first 26 minutes, including the opener from Munster Academy prop Kieran Ryan, put them on their way.

UCD capitalised on two yellow cards to get back on level terms, with tries from Gus McCarthy, Ross Deegan (2) and Mark Fleming – his third of the campaign – setting up a grandstand finish at 24 points apiece.

Credit to Pat O’Connor’s Shannon outfit, full-back Jamie McGarry swiftly squeezed over for their bonus point try to put them back in front. The knockout punch came from Mike Cooke who had the legs to run in a rousing 78th-minute intercept score.