Josh van der Flier admitted it ‘still hasn’t sunk in’ as he savoured joining a list of greats of the game as the 2022 World Rugby Men’s 15s Player of the Year, in partnership with Mastercard.

Van der Flier added to his already impressive list of individual accolades this year, edging out his captain Jonathan Sexton, 2021 winner Antoine Dupont from France, and South Africa centre Lukhanyo Am for the prestigious global honour.

He will have a couple of days off, including a long-awaited return to the golf course, before getting stuck back in with Leinster for some big BKT United Rugby Championship games and the start of their Heineken Champions Cup campaign.

Speaking in the aftermath of the awards ceremony which was held in Monaco’s Salle des Étoiles, the modest Wicklow man said: “Even though I knew I was nominated, honestly it hasn’t really sunk in (that I’ve won the award), but feeling very honoured.

“I’m very grateful, I suppose, for the team that I’ve been fortunate to be a part of, the Irish team, and how well we’ve done this year.

“They showed a highlights reel for the nominees, all my tries were set up by someone else or they were maul tries where everyone else did all the other work and I just put the ball down.

“It’s been one of those seasons where I’ve got on the end of a few, the bounce of the ball went my way.

“It was pretty cool to be even nominated alongside Lukhanyo, Antoine and Johnny as well. It was a very special moment to be announced as the winner.”

Van der Flier has been ultra consistent in his performances for both Leinster and Ireland in 2022, so much so that he is now both the reigning World Rugby and EPCR European Player of the Year – a feat only achieved by Dupont before, just twelve months ago.

The durable 29-year-old flanker played every minute of Ireland’s 2022 Guinness Six Nations run, scoring tries against France and in the Triple Crown-clinching game against Scotland.

He was also ever-present in the number 7 jersey as Andy Farrell’s men clinched a historic series win in New Zealand, coming off for only the last eight minutes of the final Test.

He notched his third try of the calendar year during that memorable victories in Wellington, and helped Ireland to complete a hat-trick of scalps of the Southern Hemisphere’s big three when starting against South Africa and Australia in the Bank of Ireland Nations Series.

The hard-earned success over the Springboks was marked by van der Flier’s fourth international score of 2022. His 26 tackles against the Wallabies also played a vital part in the Irish defence holding firm under immense pressure. 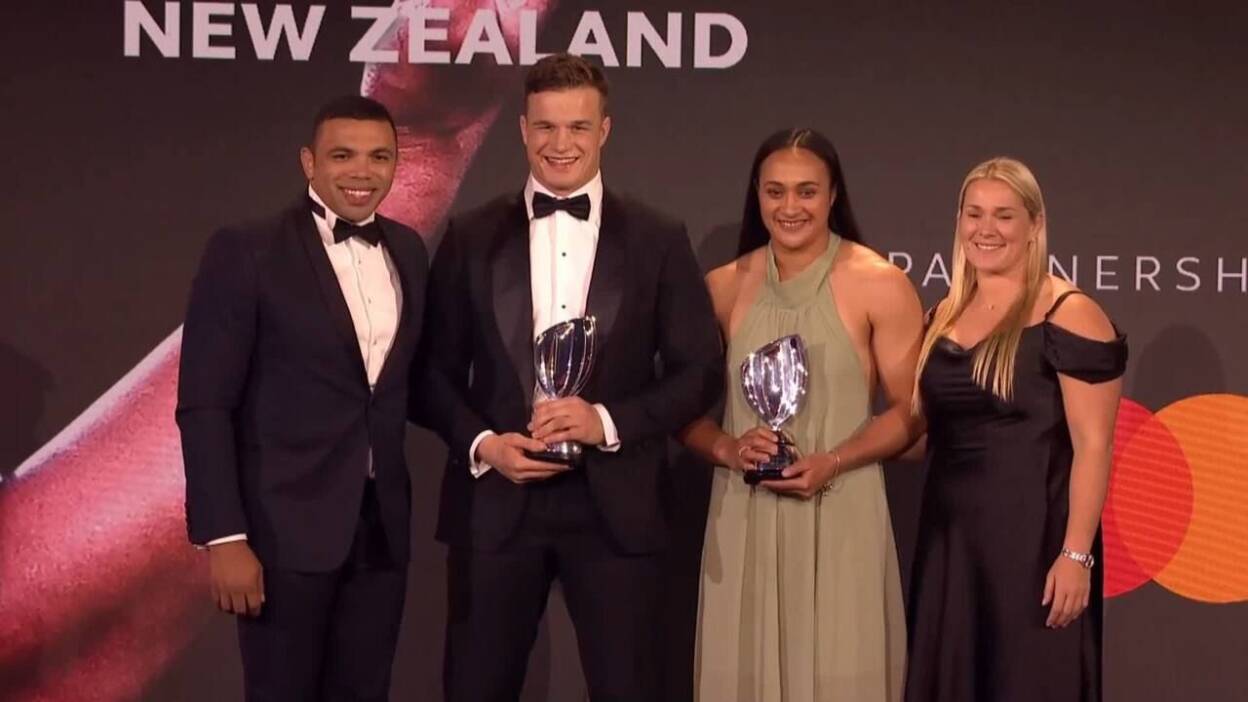 He sees plenty of room for improvement heading into the 2023 Six Nations, saying: “It’s an exciting time obviously, the November Series went well. The win against Australia gave us three wins out of three, which was brilliant.

They might not have been the best performances, but we managed to win which is obviously very encouraging.

“Looking towards the Six Nations, one of the things we say as a group is to try and keep improving. The coaches try and push a lot, the coaches expect very high standards.

“I think the players drive a lot of high standards as well. Obviously we’ll try and do as well as we can in the Six Nations. Like every other team, we’ll be trying to win it.”

It is very much a case of hard work paying off for van der Flier in terms of his current rich vein of form. He has had a few setbacks along the way, including his ACL injury in 2018, and they have certainly motivated him to get the best out of his game.

Always noted as a textbook tackler and a dynamic workhorse of a player around the field, he turned himself into a much more effective ball carrier, adding variety to his carrying and more power in contact with impressive results.

This time last year Ireland head coach Farrell, when praising van der Flier’s ever-improving displays, reckoned that ‘something clicked with Josh when Will Connors was coming onto the scene’.

The man himself acknowledged as much tonight as he spoke about managing to blend aspects of his game better than he has in the past and ‘getting more all-round performances’.

“I suppose if I was to look at a period that has definitely kicked me on was two years ago around now, when I wasn’t getting picked for some games with Leinster. Will Connors was starting, he was playing brilliantly.

I wasn’t getting picked for some of the Irish games as well. I was kind of in and out of the team. I realised, I mean I always try to improve, but I was like, ‘I need to kind of up my game or I won’t be playing for Leinster or Ireland’.

That was definitely a thing that drove me on. I probably managed to get a good blend the last year or so of the various bits of my game that had been good over a few years, I just managed to get it to performances on the weekend.

“As things fall into place I guess, I managed to stay fit and got a few bounces of the ball and obviously was in a great Leinster team and a really, really good Irish team.”

It was a memorable night for Irish Rugby at the World Rugby Awards on the French Riviera, with Terry Kennedy crowned the World Rugby Men’s Sevens Player of the Year, and van der Flier, Sexton, Tadhg Furlong and Tadhg Beirne selected on the Men’s 15s Dream Team.

Getting a chance to speak with some of the former World Rugby Players of the Year, and with the countdown to the Rugby World Cup well and truly on, the Leinster back rower wants to make sure Ireland continue on an upward curve in 2023. 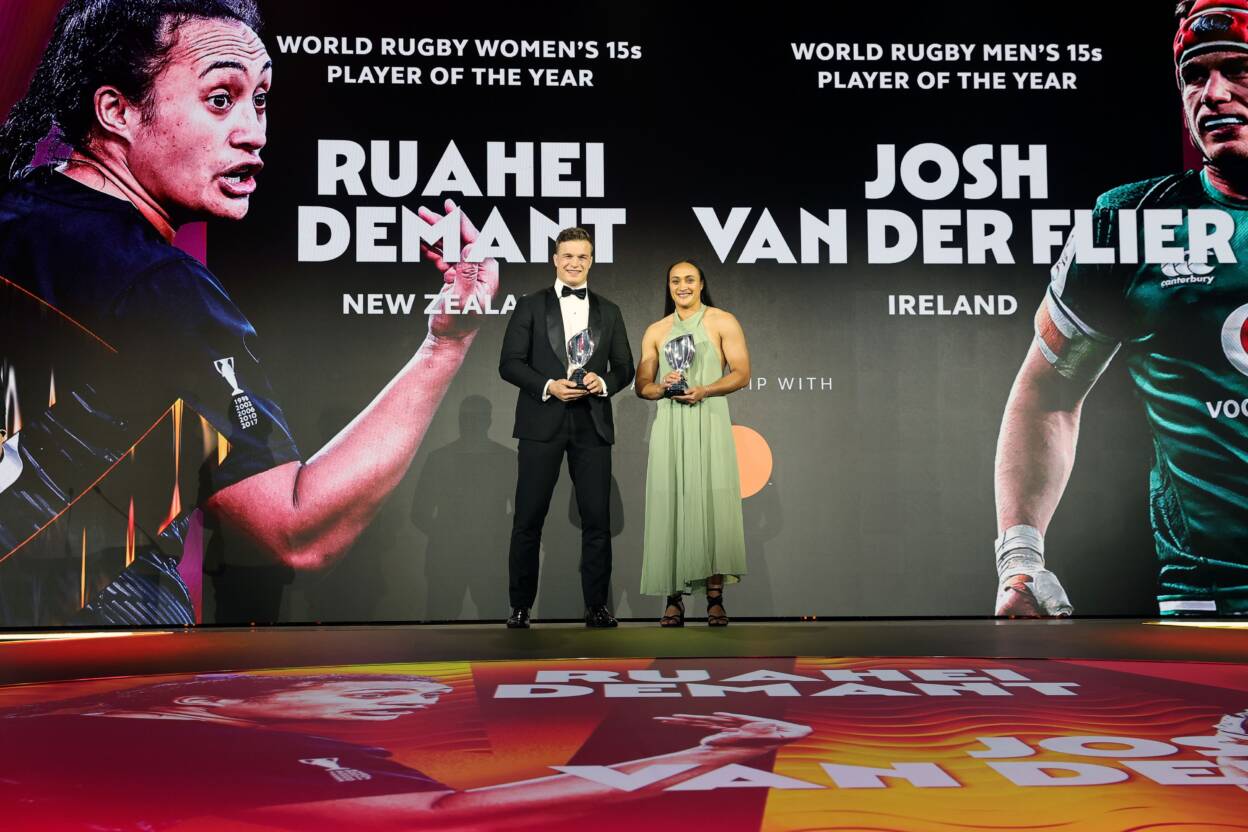 “Team success is what you want at the end of the day. Even chatting to and being around all the players that were at this awards event – I was sitting at a table with the likes of Dan Carter, Bryan Habana, Conrad Smith…all these greats of the game.

“Chatting to them, it definitely drives you on to kind of not make it a once-off season that goes really well. You look at the legends of the game like them that have played to that top level for 15 years or so.

“So, that’s certainly going to drive me on. No doubt the way we’ve been pushed by the coaches in Ireland to perform and to try and improve, I think you’ve probably seen that in the individual performances as well as the team performance.

“Definitely it’s promising, (just) looking at improving and hopefully we’ll have a few more people on the Dream Team next year.”

It is a measure of the stature of van der Flier’s achievement as the latest World Rugby Player of the Year that players of the calibre of Brian O’Driscoll, Gordon D’Arcy, Paul O’Connell and Jamie Heaslip have been nominated and never won the award.

He is only the third Irishman to win rugby’s biggest individual honour, following in the footsteps of the legendary Keith Wood, the inaugural recipient back in 2001, and Sexton who was chosen on the back of Ireland’s 2018 Grand Slam triumph.

To be up there now with national captains, record breakers and World Cup winners, van der Flier is well aware of the enormity of it all given how closely he followed the awards during his school days.

“I remember in school I used to know off by heart, every year, who had won the World Player of the Year,” explained the former Wesley College pupil.

“I’d say if you had asked me today I would have been able to rattle it off as well! It’s crazy really to be up there with them (Wood and Sexton).

“Obviously it’s a nice moment, but I do have to think it’s as a result of how well the team’s performed and obviously being on a winning team helps for sure.”