Both teams have a home semi-final to look forward to next month, but Ben Martin’s ‘Rock side preserved their unbeaten record thanks to first half tries from Anna Doyle, Maeve Óg O’Leary and Méabh Deely.

Although Railway, who suffered two sin-binnings, fought back with scores from Ireland backs Aoife Doyle and Molly Scuffil-McCabe, Nikki Caughey could only add one conversion as the visitors hung on to take the spoils.

Despite having their first lineout stolen by Eimear Corri, Railway had the better of the early exchanges with captain Niamh Byrne and Aoife McDermott winning turnover penalties, and winger Doyle threatening from a Caughey kick through.

The hosts pressed for a try on the 10-minute mark, Aoife O’Shaughnessy making the initial incision by breaking into the Blackrock 22. They continued to chip away until Anna Doyle’s tackle forced a knock-on from Scuffil-McCabe. 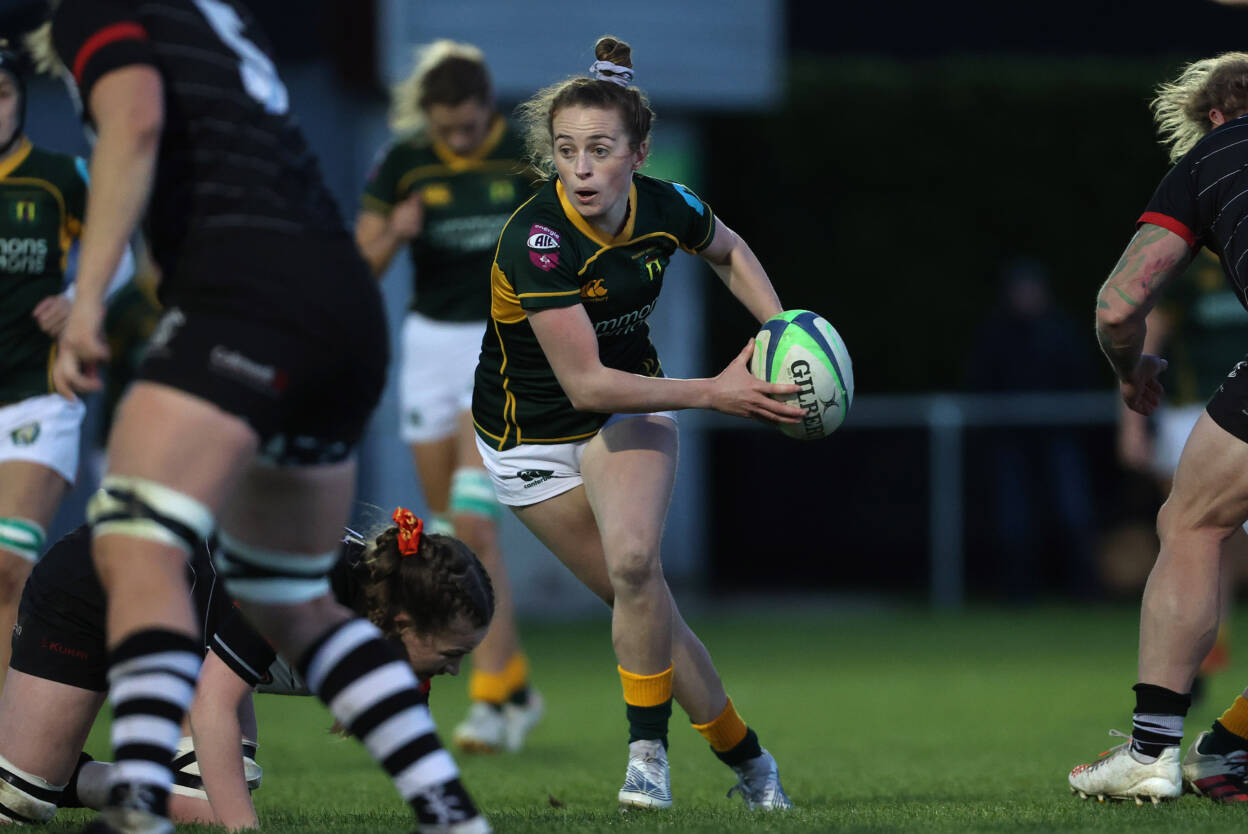 Railway fell foul of the referee’s whistle, losing hooker Chloe Blackmore to the sin bin, and despite rebounding well with replacement Lisa Callan carrying strongly, they were soon behind on the scoreboard.

Caughey had a kick blocked by Enya Breen, Corri gobbling up the loose ball to rampage down the right touchline – showing her pace as a former winger – only to be denied by the chasing Leah Tarpey.

Nonetheless, Blackrock recycled quickly through a number of phases before Maeve Liston, stepping in as first receiver, ran hard out to the left and sent a terrific skip pass out for Anna Doyle to score in the corner.

Breen cleared the crossbar with an excellent conversion for a 7-0 lead, but Byrne soon sparked Railway’s attack with a turnover penalty which Scuffil-McCabe took quickly to send Aoife Doyle surging downfield.

A knock-on ended that particular Railway attack and they needed some more breakdown smarts from Byrne to foil a Blackrock breakout, which saw winger Liston threaten out wide from a Breen kick.

On the half hour mark, ‘Rock struck for their second try. The wily Beth Cregan managed to disrupt Ailsa Hughes at a ruck, with O’Leary scooping up the loose ball to dart inside Caughey and cross to the left of the posts. Breen converted.

After both sides received a warning about shouting for penalties, Railway scrum half Hughes paid the price with a penalty reversal and a yellow card. A third ‘Rock try followed. 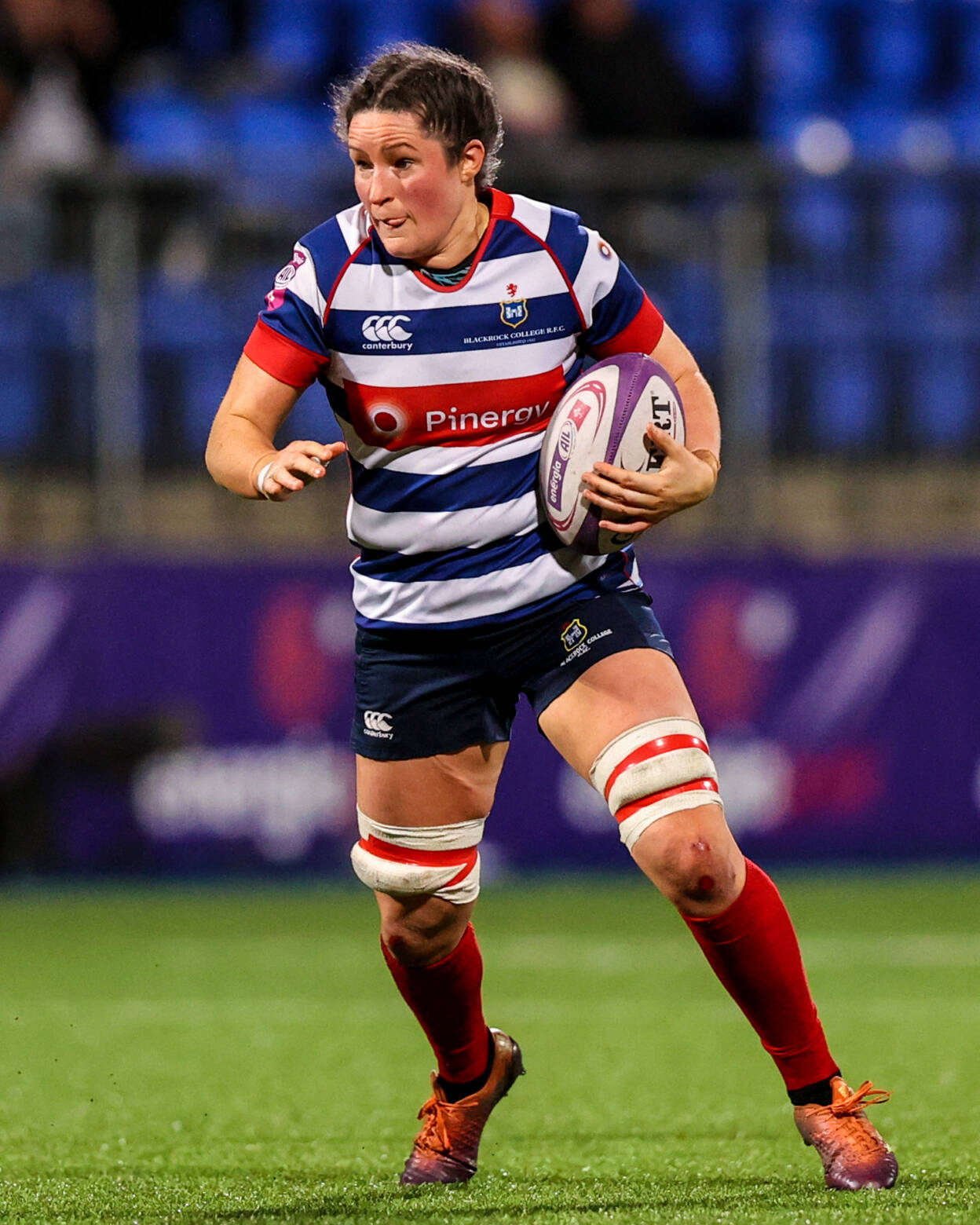 Hannah O’Connor came off the visitors’ bench and her direct carrying paved the way for the score, backs Breen, Liston and Natasja Behan working the ball wide for replacement Deely to crash over and make it 19-0.

The fired-up Railway forwards hit back with a barnstorming lineout maul from just outside the Blackrock 22. Prop Lindsay Peat got the grounding – much to the home crowd’s delight – but Caughey flashed the conversion wide from the left.

Into the second period, Peat drove Railway forward again with a bulldozing carry and a scrum penalty. They did not have to wait too long for their second try as they closed the gap further.

With Liston rushing up in defence, Byrne took advantage. Her nicely-timed pass released Aoife Doyle from 40 metres out, and the Limerick native dummied to nip inside Behan and take off past Tatum Bird’s attempted tackle to dot down behind the posts. 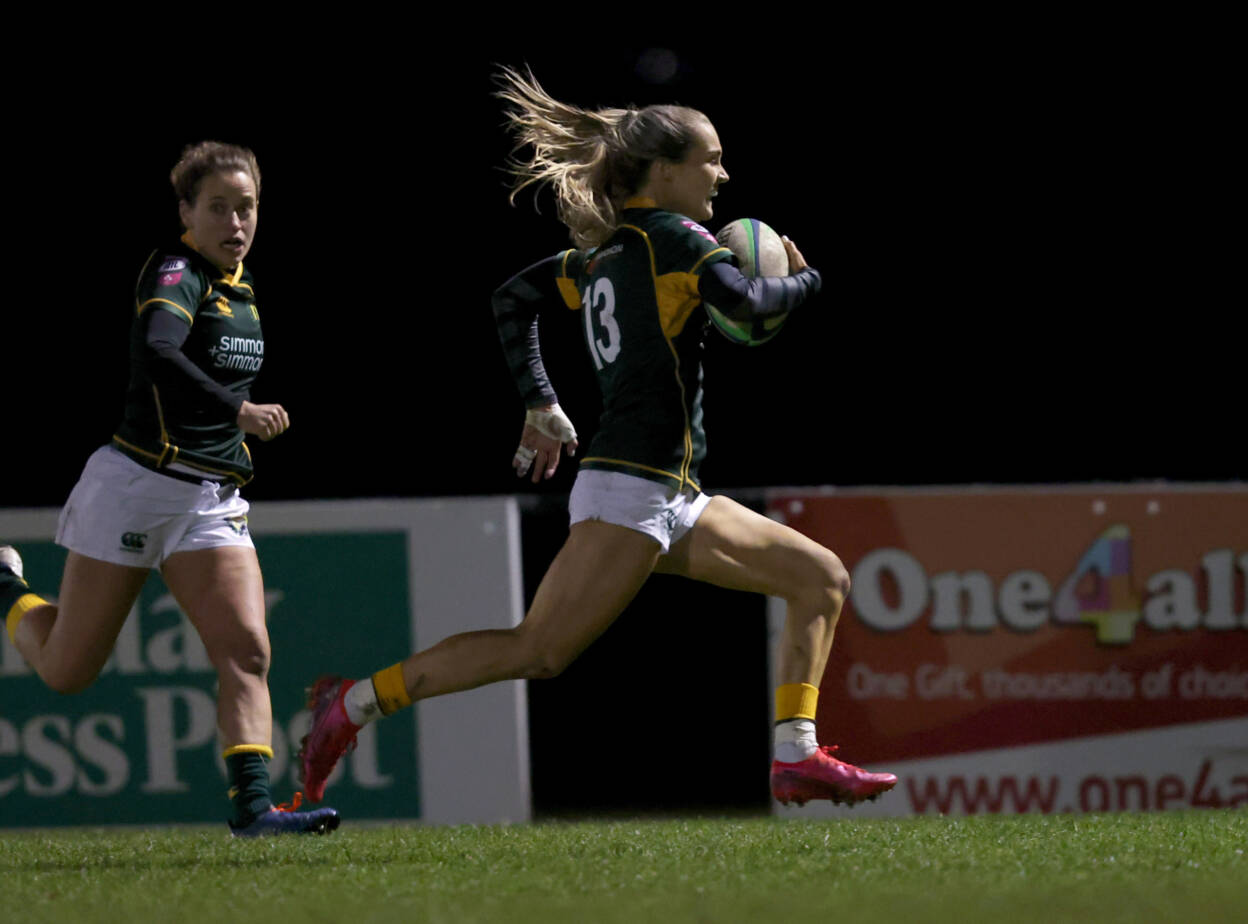 Caughey’s conversion made it a seven-point game and as Railway came hunting for the levelling score, their maul did more damage. Both Behan and Liston had to scramble to prevent replacement Stephanie Carroll from scoring in the corner.

Railway also had to cope with a series of frustrating knock-ons and heading into the final quarter, a territory-starved Blackrock were still standing firm in defence. Byrne pinned them back again by getting a decision at the breakdown.

Another chance went abegging when Bird and Laura Feely combined to hold up McDermott, while Ballinasloe talent Deely was reeled in by Scuffil-McCabe as Blackrock missed out on a potential bonus point try.

Breen flashed a close-range penalty wide with just under ten minutes remaining, before Byrne provided the inspiration once more for the title holders. She broke back into the ‘Rock 22 from her own quick tap.

Railway had another couple of bites at the cherry, with Molly Boyne and Callan both carrying powerfully. Their persistence finally paid off when Scuffil-McCabe was sent over in the right corner by Doyle.

‘Rock remained in front with Caughey pushing the difficult conversion wide on the near side, and the visitors stopped Railway from breaking from deep in the dying seconds to confirm a hard-fought victory. 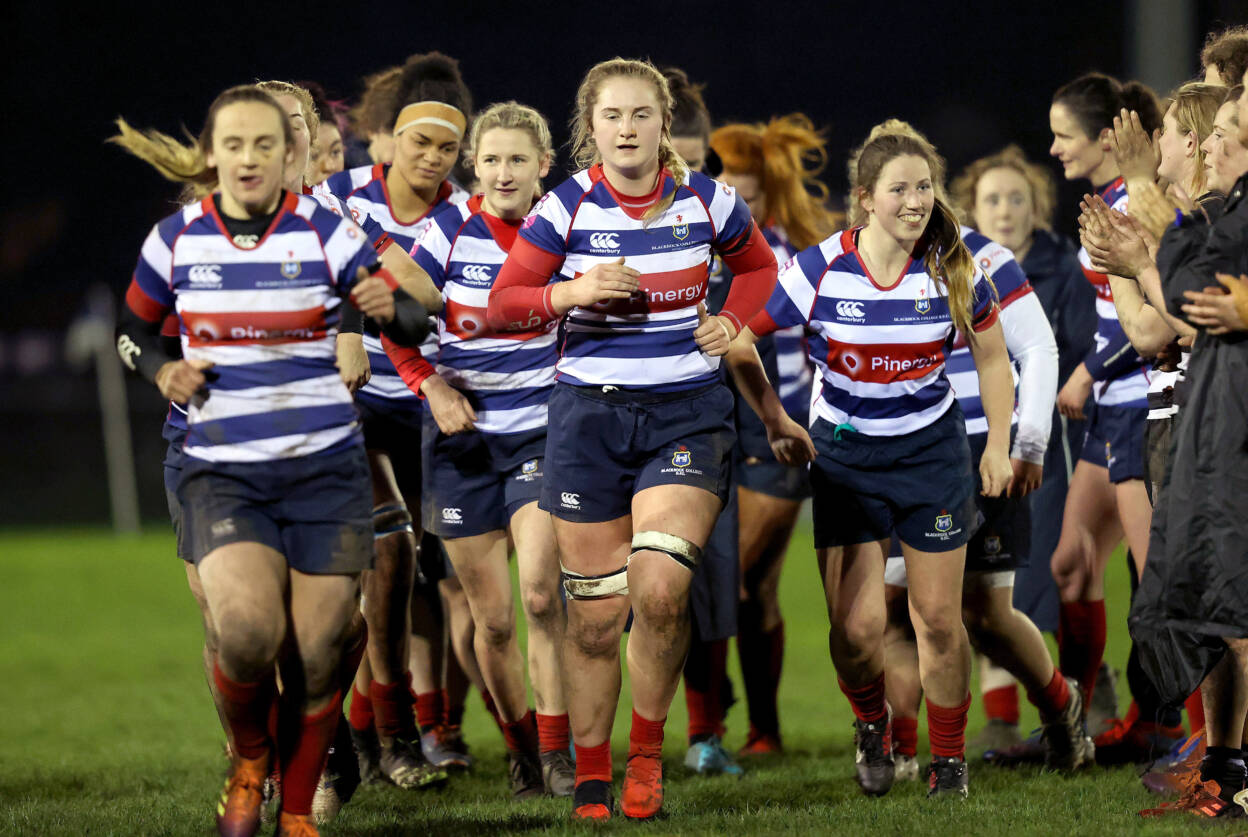 Third-placed Old Belvedere wrapped up their regular season with a 17-8 success against Wicklow. First half tries from captain Deirbhile Nic a Bhaird, Jemma Farrell and Aine Donnelly did the damage.

It is a measure of Wicklow’s excellent progress that, compared to last year’s 63-0 defeat to the same opposition, they finished strongly at Ollie Campbell Park and were only nine points in arrears thanks to a late try from replacement Caoimhe Molloy.

Jason Moreton’s charges fell behind to an opportunist third-minute score from Nic a Bhaird. She followed the flight of a penalty attempt from Dannah O’Brien and although the kick went wide, the ball bounced up for the quick-reacting number 8 to touch down.

It was a double whammy for Wicklow who temporarily lost player coach Niamh Ni Dhroma to injury soon after. However, a monster scrum, won against the head, sparked the visitors into life.

Nic a Bhaird got her team out of some trouble with a turnover penalty, but another powerful scrum from Wicklow set up a shot at the posts for Beth Roberts who reduced the arrears to 5-3 in the 13th minute. 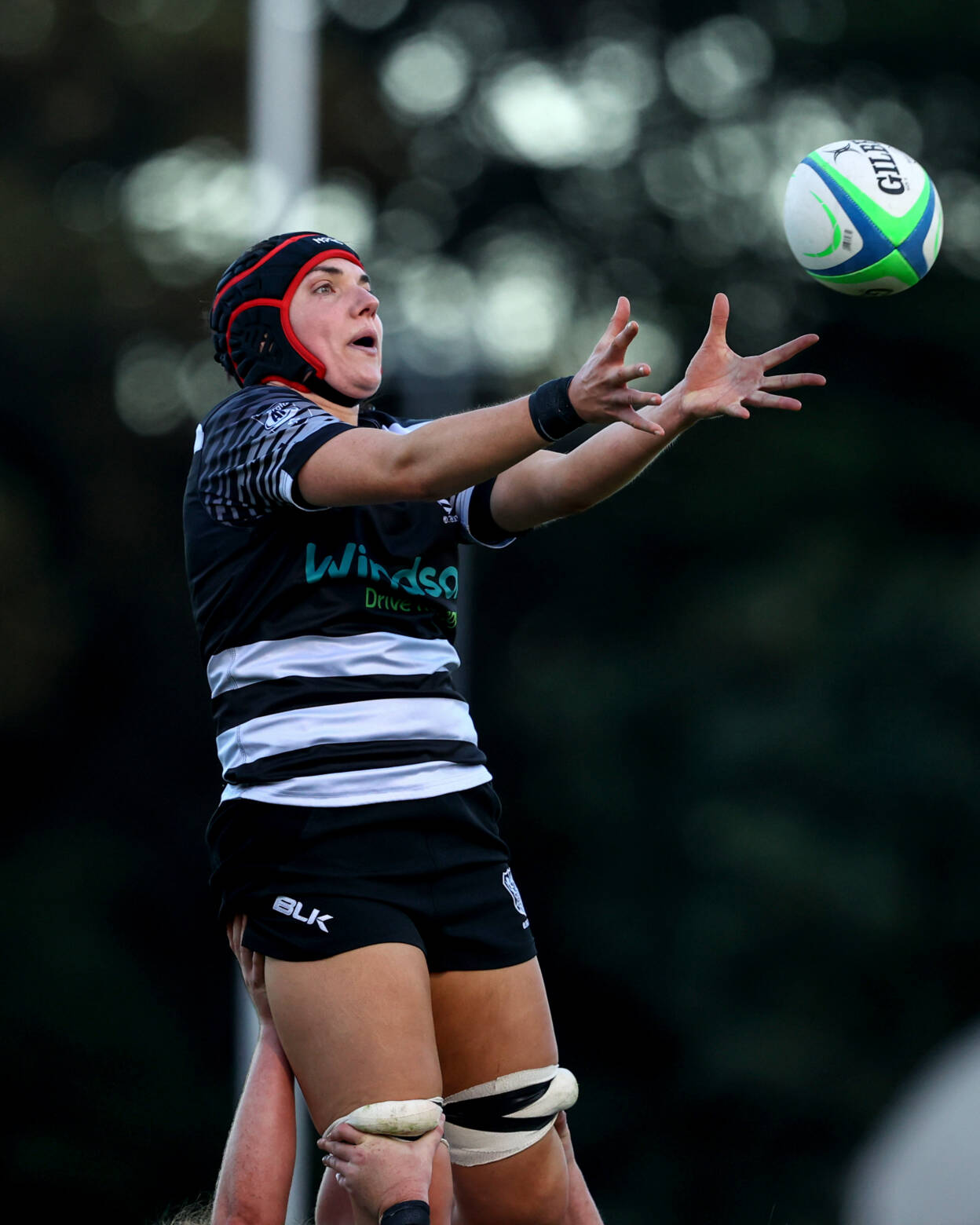 That good work was undone when they allowed O’Brien’s restart kick to bounce and Belvedere’s Rachel Murphy retrieved it. A superb one-handed lineout take from Elaine Anthony had the Dubliners seeking out a second try.

Despite Aoife Dalton knocking on a pass, ‘Belvo were not to be denied. They won successive penalties to keep the pressure on and Clodagh Dunne’s slick 18th-minute offload out of a tackle put Farrell over beside the posts.

Her half-back partner O’Brien tagged on the extras for a 12-3 scoreline, and Wicklow emerged scoreless from their next bout of scrum pressure. Indeed, ‘Belvo won a relieving penalty at the set piece to clear the danger.

Getting possession straight back from a crooked throw by Murphy, Wicklow continued to opt for scrums from penalties either side of halfway. Replacement Becky Condren showed impressive control at the base as ‘Belvo were driven backwards. 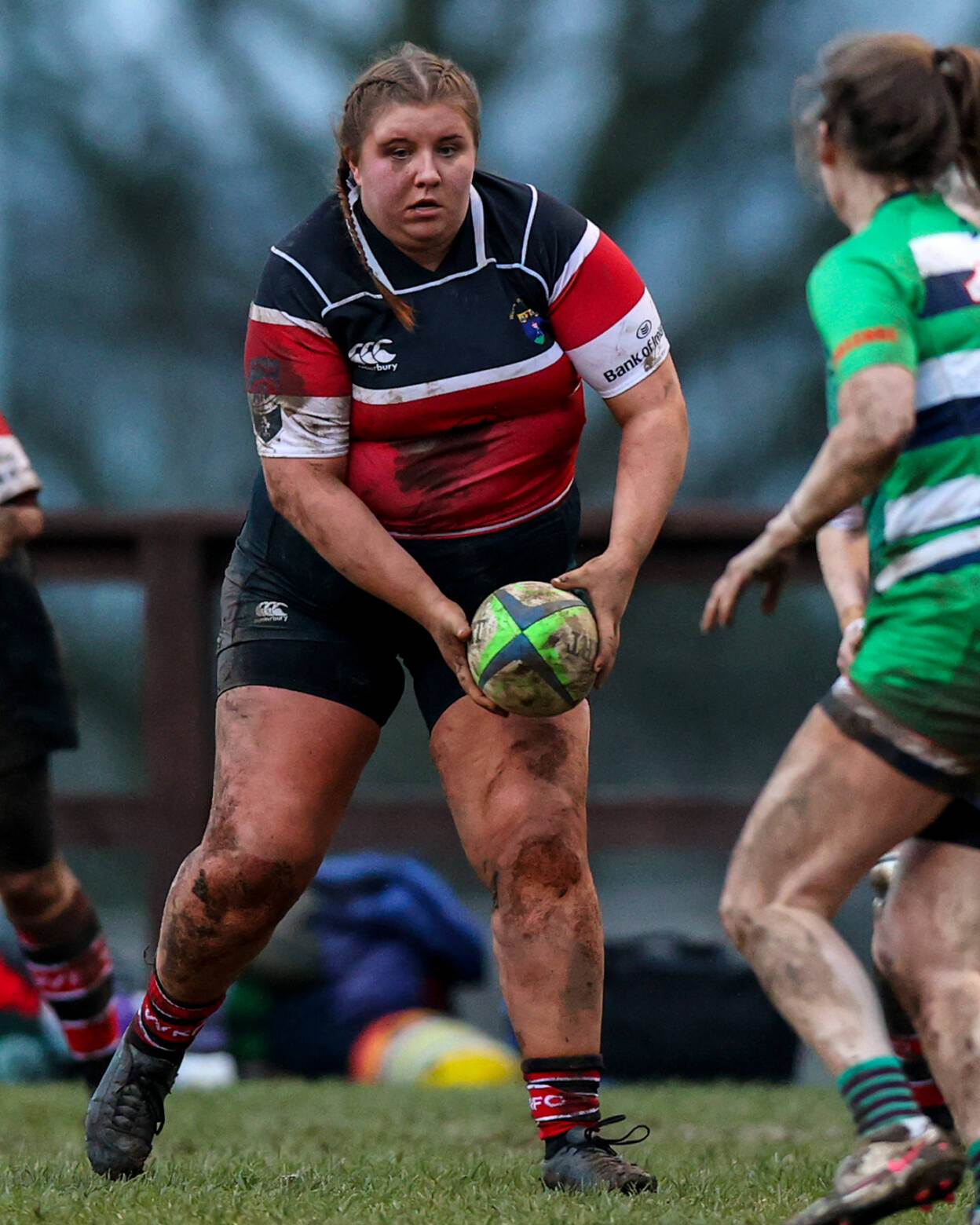 After deciding on the lineout option, a knock-on from Naoise O’Reilly in midfield added to Wicklow’s frustration. They fired back with a penalty won at the breakdown, with Meagan Parkinson rewarded for her timing.

Ni Dhroma came back on at number 8, and despite Belvedere holding firm at scrum time with the help of replacement Vic Dabanovich O’Mahony, Wicklow were soon on the move again thanks to a searing run from winger O’Reilly.

Yet, it was ‘Belvo who were clinical when within reach of the try-line. They turned a late attacking spell into their third try, O’Brien’s inviting offload out of a tackle putting full-back Donnelly over for a five-pointer on the stroke of half-time.

Turning around with a 17-3 deficit, Wicklow made early inroads on the resumption through sniping scrum half Roisin Stone. A countering Ella Roberts then linked up with Ni Dhroma on the left wing to have ‘Belvo scrambling back.

Elise O’Byrne-White’s thumping tackle on Aoibhin Stone summed up the commitment from both sides, and defences were on top through a series of knock-ons, penalties, and a lineout steal from Belvedere’s influential lock Anthony. 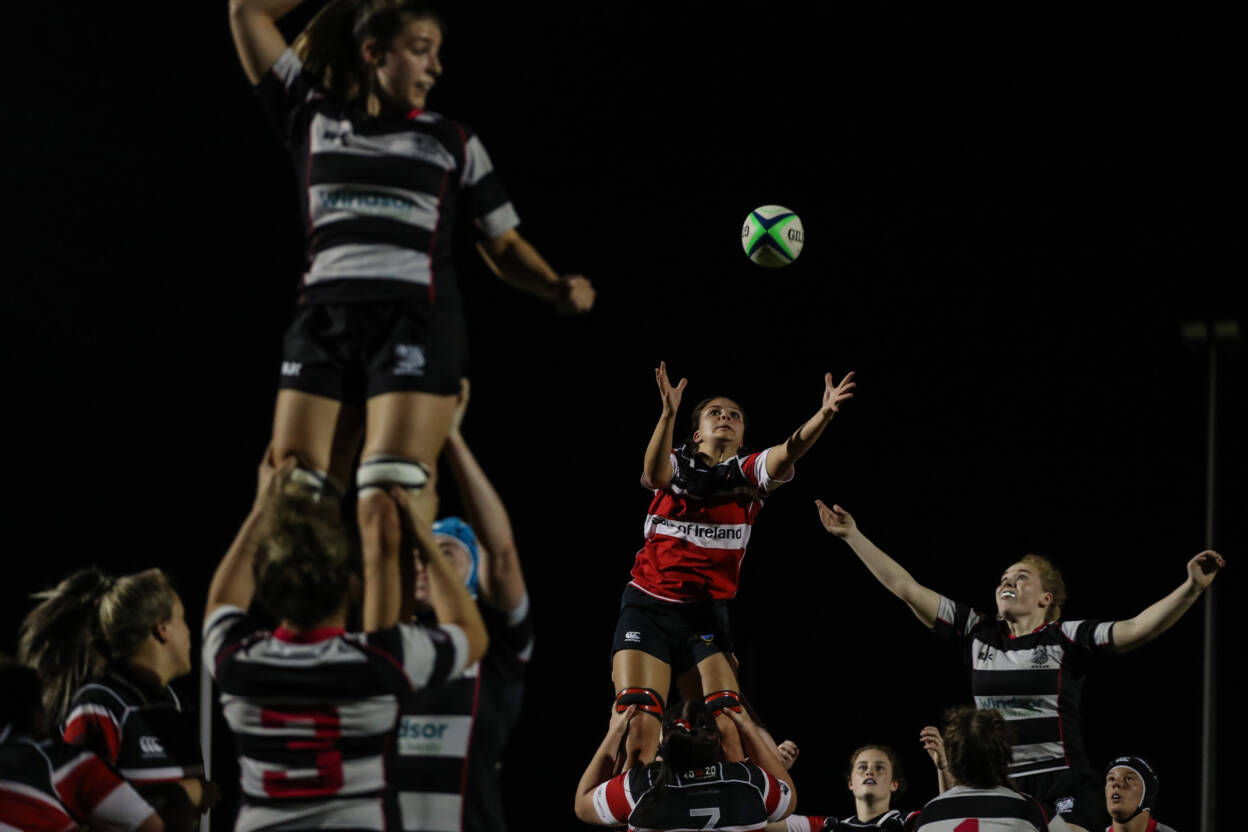 Obstruction at a lineout maul robbed Wicklow of one of their best try-scoring opportunities, and they needed some gritty defence from young out-half Roberts to prevent replacement Hannah Wilson from grounding the ball off a close-in carry.

‘Belvo’s bench brought impact, with young scrum half Katie Whelan earning a turnover penalty, but it was her dropped ball that Naoise O’Reilly dived on to allow Wicklow to kick clear to touch.

The tit-for-tat exchanges continued, Noelle Ward’s rip in the tackle preceding a Nic a Bhaird penalty won at the breakdown. Both lineouts were coming under immense pressure, a steal from Rachel Griffey rallying Wicklow.

They did get over for a try that their efforts deserved, but it came too late to influence the outcome. Beth Roberts tapped a penalty and fed Molloy to barge over inside the final seconds, with Roberts missing the conversion on the near side.

Elsewhere, UL Bohemians moved into the top four thanks to a 55-12 success at Cooke. Alana McInerney and Ciara O’Dwyer scored two tries each. Ireland Under-18 duo Clara Barrett and Kate Flannery also crossed the whitewash.

Australian duo Annie Buntine and Janita Kareta both touched down during Suttonians’ 24-12 triumph over Ballincollig. They bagged their second try-scoring bonus point of the campaign, ahead of next week’s trip to Blackrock.