History was made in the Energia All-Ireland League Women’s Division as Wicklow beat Suttonians for the first time.

Second half tries from teenage scrum half Roisin Stone and Linda Dempsey guided Jason Moreton’s young side to a famous 27-10 home win. They scored five tries in all, including a well-taken Sarah Gleeson effort from a Beth Roberts chip through.

Stone’s early turnover penalty, combined with a fine touchfinder from Gleeson, had Wicklow on the front foot at a blustery Ashtown Lane. Rachel Griffey was held up before the hosts built again from an Aoibhin Stone interception.

They got their offloading game going, with influential number 8 Caoimhe Molloy also regularly getting over the gain-line. A quickly-taken penalty led to winger Suzanne Tyrrell crossing for the opening try, to the left of the posts.

Jessica Schmidt won a breakdown decision to put Wicklow on the hunt for try number two. Further pressure on Sutts saw them concede a five-metre scrum, and Molloy carried well before half-backs Stone and Roberts sent Tyrrell over to make it 10-0.

Suttonians got their attack going through a series of penalties and a Grainne Tummon lineout steal. On the half hour mark, Australian prop Janita Kareta burrowed over for a try that rewarded some of her pack’s best phase-building.

Mary Healy’s well-won turnover penalty prevented Wicklow from hitting back quickly, but Roberts’ dink over the top in the 35th minute bounced up for the inrushing Gleeson (pictured below) to score. Roberts converted for a 17-5 lead. 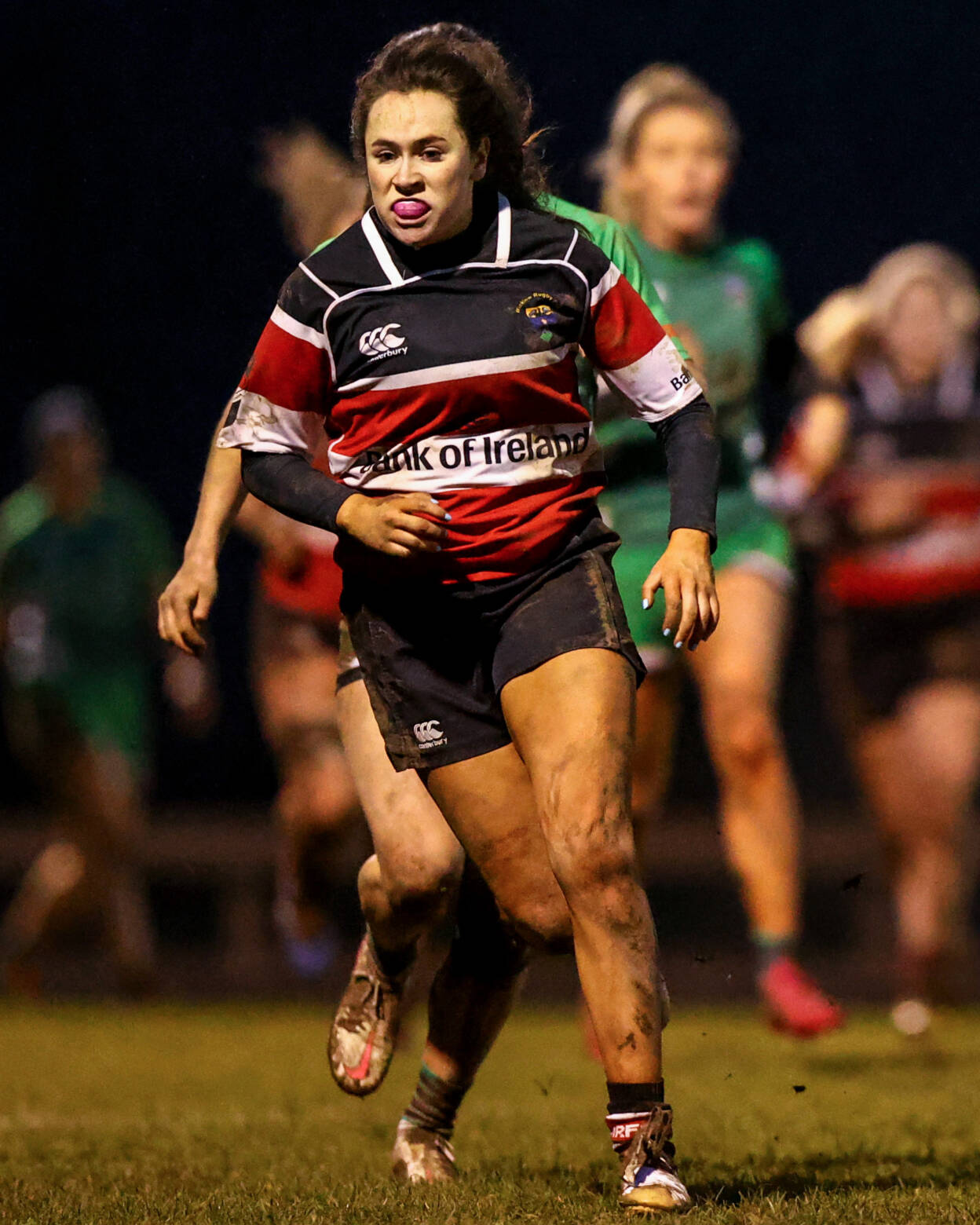 Annie Buntine lifted the tempo for Sutts before the break, supplying prop Healy who tore over from 15 metres out to make it a seven-point game.

Nonetheless, with the backing of a strong wind in the second period and the vocal home support, Wicklow duly picked up their bonus point.

Naoise O’Reilly ran a kick back with interest, scrum half Stone spotting her opportunity to dummy through. She slipped out of Buntine’s tackle to dart over the whitewash.

Sutts full-back Sophie Gibney was sin-binned for being offside at a penalty, the visitors defiantly defending their line but now struggling to get out of their own half.

With less than five minutes remaining, strong carrying from Becky Condren and Roisin Stone took Wicklow right up to the try-line again. Condren was stopped short but Dempsey managed to force her way over, with Molloy on the latch. 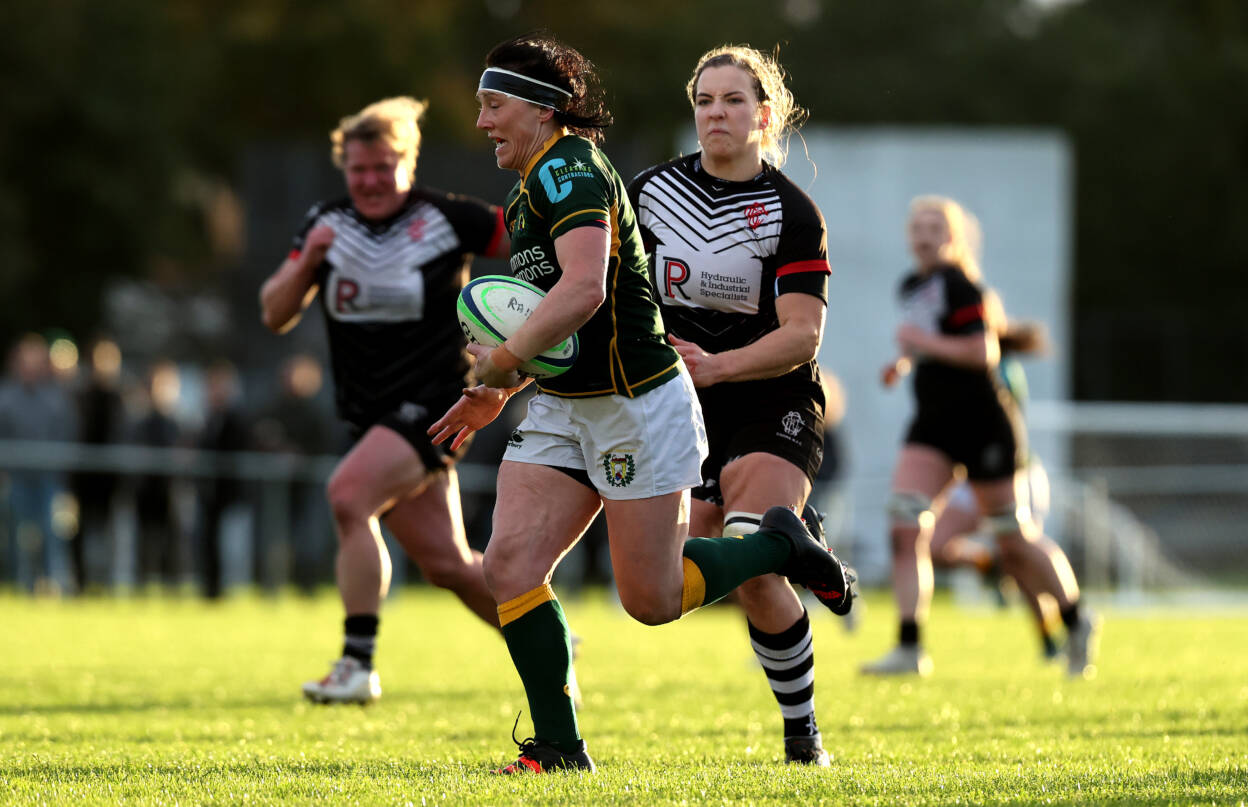 Peat started the scoring inside two minutes, charging over to the right of the posts after Deirdre Roberts had made the initial incision from a tapped penalty. Eve Higgins was just short with the conversion.

A powerful shove saw Cooke win a scrum against the head, but Railway were lethal in attack at times, knifing through and threading a neat line of passes out for Molly Scuffil-McCabe to score in the eighth minute.

The injury-enforced loss of Naomi McCord was a further setback for Cooke, who threatened to score from a surging breakout by flying winger Megan Edwards. Murphy Crowe chased her down and tackled her on the edge of the home 22.

Aoife Doyle (17 minutes) and Roberts (23) took care of Railway’s bonus point, before Murphy Crowe got in on the act, sidestepping and darting clear from inside her own 22 to make it 27-0. 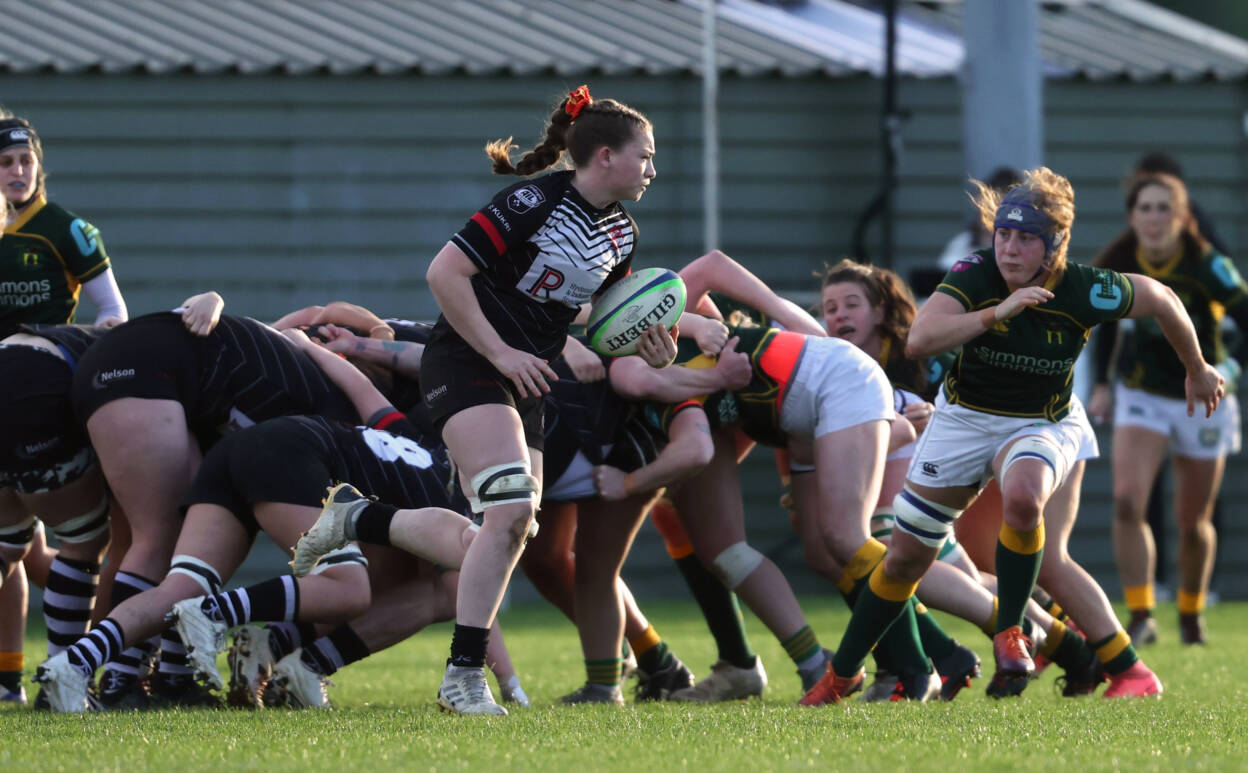 Leading 44-0 at the break, an early second half onslaught from John Cronin’s side saw Murphy Crowe cross from a Katie Heffernan pass. Full-back Scuffil-McCabe countered from deep to set up Doyle’s second score, despite a committed chase from Teah Maguire.

Experienced prop Ilse van Staden led the way for Cooke in the physical stakes, but despite a scrum penalty seeing them kick to the corner, their lineout let them down again as Railway kept them scoreless.

Murphy Crowe and Peat kept the tries coming for the Dubliners, the latter plunging over from a close-in ruck before the Tipperary speedster went on to dominate the closing stages.

Carmen Rodera sent Murphy Crowe over in the right corner, replacement Nikki Caughey, who added two conversions, played in Peat for her fifth try, and lovely hands from Higgins and replacement Aimee Clarke released Murphy Crowe to take the hosts up to 83 points.

Cooke’s lineout misfired a few metres out from the whitewash, leaving another potential try behind them, and Murphy Crowe completed her impressive late salvo by muscling over from a ruck after Clarke was tackled short of the line. 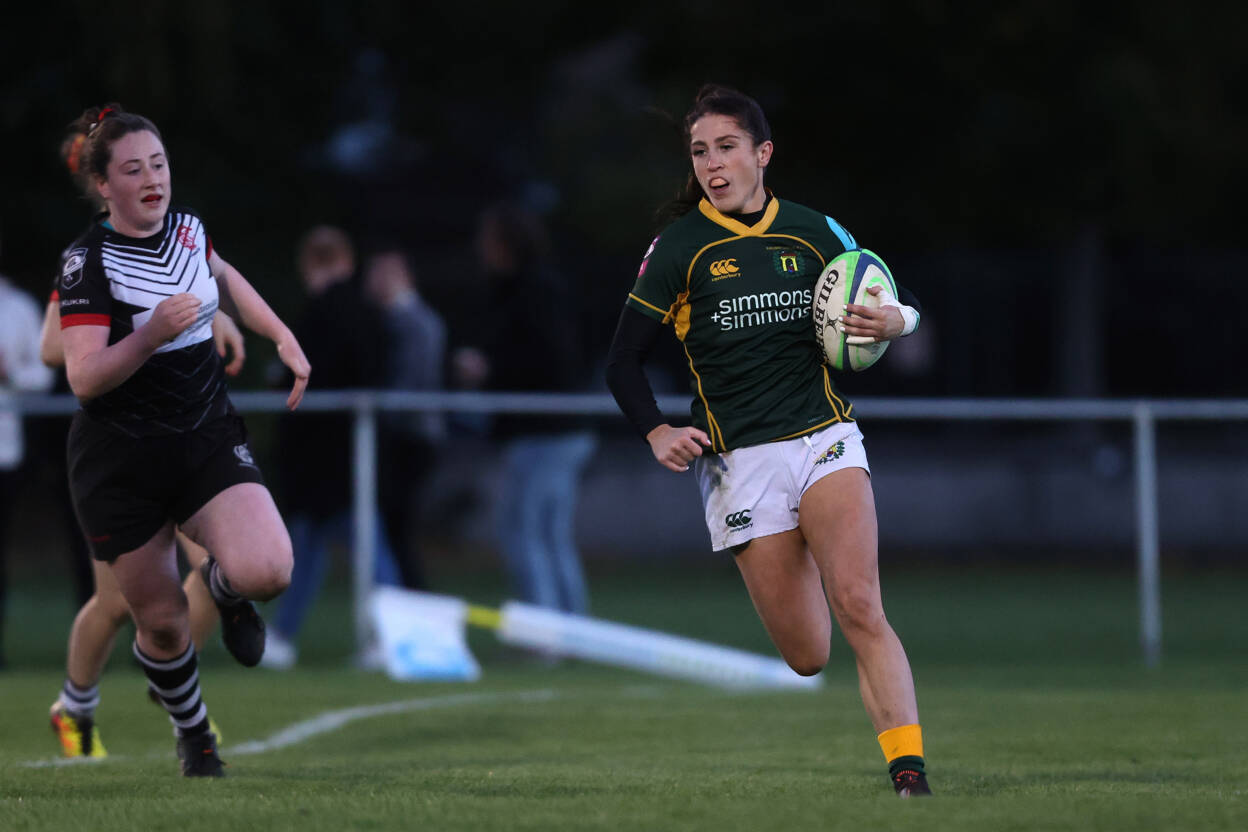 Old Belvedere remain top of the table, their fifth straight victory was a well-judged 24-0 dismissal of Galwegians at Ollie Campbell Park.

‘Wegians were missing injured captain and the division’s top scorer, Nicole Fowley, but were only five points behind at half-time. Elise O’Byrne-White crossed in the right corner in the 13th minute, following passes from Jemma Farrell and Aine Donnelly.

French newcomer Maelle Jouve and Orla Dixon made some big defensive plays for the visitors, but Belvedere’s club captain Jenny Murphy crashed through on a weaving run for a 45th-minute try and a 10-0 lead.

A loose kick from Jouve was punished with a seven-pointer, Laura Carty countering and sending pacy flanker Fiona Tuite over for Dannah O’Brien to convert. ‘Wegians had gone close before that, but replacement Jordan Hopkins just lost control of the ball.

Ireland Sevens international Brittany Hogan secured the table toppers’ bonus point in the 74th minute. Tuite tore down the right wing, Murphy and O’Brien both carried before a close-in penalty set up Hogan to dive over.

Blackrock College made it four wins out of four with a 63-7 success away to a below-par UL Bohemians. Beibhinn Parsons, adding to her five-try haul from last week, and Megan Burns ran in two tries each.

Parsons was involved in the build-up to Anna Doyle’s 10th-minute opener on UL’s 4G pitch. Blackrock doubled their lead to 10-0 when Lisa Mullen’s kick bounced nicely for Beth Cregan to send Ali Coleman over out wide on the left.

Out-half Mullen’s skip pass put Parsons away to make it 15-0, before UL Bohemians captain Chloe Pearse closed the gap, dribbling the ball through and getting the touchdown after some sniping runs from half-backs Muirne Wall and Kate Flannery.

The Red Robins did well to hold up Laura Feely, but Doyle delivered the scoring pass for Ella Durkan to reach over for ‘Rock’s bonus point try. Skipper Michelle Claffey neatly beat two defenders to score from outside the hosts’ 22.

Blackrock were 34-7 to the good at the interval, following Claffey and Eimear Corri’s hard work to earn a turnover. The ball was fed wide for Parsons to finish off try number six.

Mullen, who accumulated 13 points, converted her own try just after the restart. A powerful run from Enya Breen, playing against her former club, gave ‘Rock the momentum again and Mullen stepped off her left to go in under the posts.

Impressive hooker Emma Hooban was up in support of Parsons to storm over from outside the 22, her try beginning way back in the visitors’ half with a rampaging run from second row Corri.

Fleet-footed winger Burns wriggled away from the cover to get on the scoresheet, with Hooban, Breen and Claffey all prominent during the build-up. Bohs were now 51-7 behind and little was going right for them despite plenty of endeavour.

Ireland Sevens international Burns was released by replacement Jackie Shiels to slice through for her second score. A tightly-angled conversion was tagged on by Mullen from the left.

Ciara O’Dwyer and Clodagh O’Halloran combined on a promising midfield break for Bohs, with replacement Brianna Heylmann also making an impact. Their persistence failed to pay off, with replacement Leah Sweeney held up in the dying seconds.

Before that, Blackrock had passed the 60-point mark. Their eleventh try was an excellent one, Cregan and Aoife Moore linking on halfway, the prop raiding downfield and Coleman provided the support and a looping offload back inside for Corri to go over in the left corner.